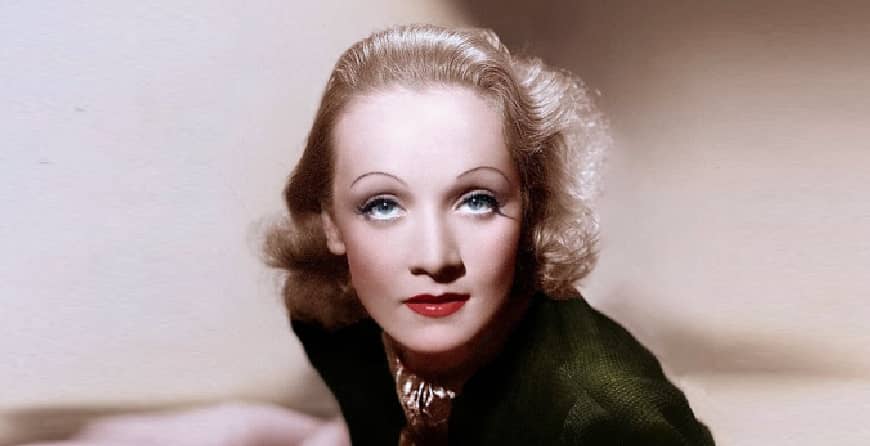 You could be forgiven for thinking that the 1930s were a time of opulence and prosperity - given that the makeup looks oozed glamour. But in actual fact, people were still feeling the strain of the great depression - and women didn’t necessarily have much money to spend on luxuries like beauty products.

This brought about the rise of practicality in the makeup industry. Products were made in a way that allowed fewer of them to be used to achieve the same results. Softer colors also became more popular, and makeup styles started leaning towards a more natural look.

What Were The Makeup Trends of the 1930s? 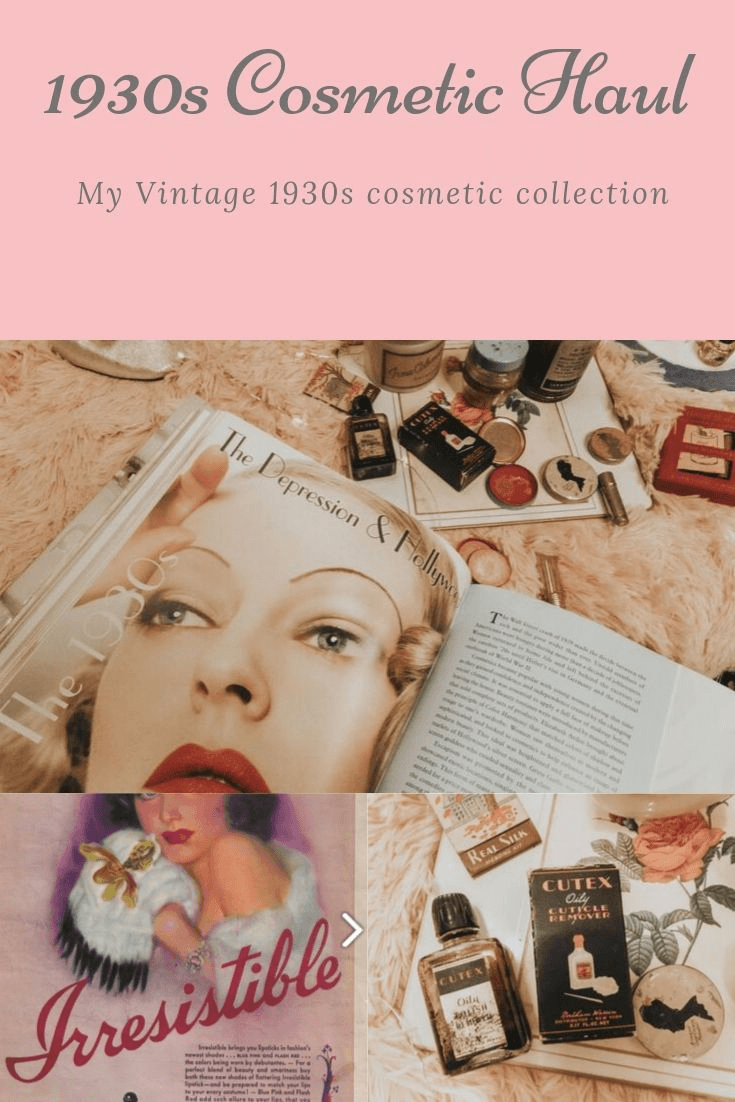 Makeup in the 1930s took a clear departure from what was the norm in the 1920s. Femininity was pushed to the forefront, and it became more emphasized.

For instance, women started wearing longer, curlier, and wavier hair. Similarly, the heavy eyeshadow that was popular in the 20s was replaced by lighter shades.

In this way, while the 20s woman was bold and loud and fun, the 30s woman was delicate, reserved, and mysterious. It was a fitting juxtaposition of the Roaring Twenties and the Great Depression.

1930s makeup was inspired by Hollywood stars like Marlene Dietrich, Greta Garbo, and Carole Lombard. They wore glamorous, feminine styles that got a lot of women to start using pale ivory foundations, resulting in a soft and delicate look.

Pencil-thin eyebrows were also very popular in the 30s. Some women plucked their eyebrows away entirely just so they could paint them on with kohl. Again, this was largely influenced by the Hollywood actresses of the time. Back then, it was believed that high brows were more emotionally expressive on screen. So actresses often drew pencil-thin eyebrows a bit higher than usual on their faces when they appeared on the screen. 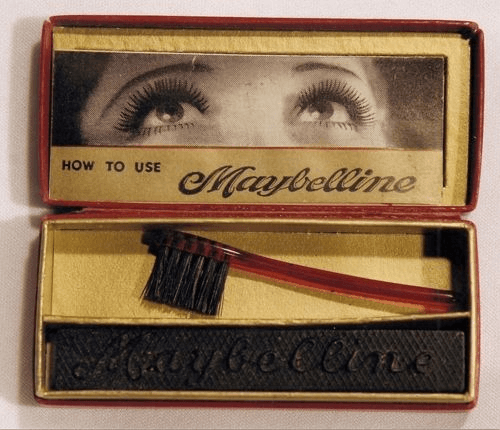 Cake mascara is a type of wax-based mascara. It was applied directly from a pot or tray with a brush.

Using cake mascara gave women long, luscious lashes. It was different from today’s mascaras in several ways. For instance, because it was wax-based, it did not dry out or clump up, and it was completely waterproof. The only drawback was that the preparation process could get rather messy and had a steep learning curve to it.

However, while it may have taken quite a bit of practice to master, it resulted in a glamorous and gorgeous look. All the celebrities of the time wore it whenever they stepped out. 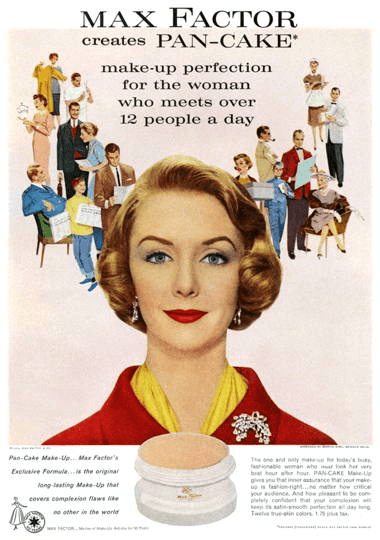 The Pan cake foundation was popularized by Hollywood makeup artist Max Factor who used it on many actresses. It finally became commercially available in 1937, much to the joy of many women.

The foundation was seen as classy and elegant. Applied with a brush, it gave the skin a matte finish. Of course, this was essential for actresses appearing on the screen. However, regular women adopted it just the same, and it became a widely popular look.

To achieve this look, white or ivory powder, or special rice powder, was applied on top of a “vanishing cream.” It was often used together with rouge, although rouge was used sparingly. Rouge had fallen out of vogue by the 1930s, so very little of it was used to achieve a slightly flushed look.

Eyeshadows also saw a slight change in the 30s. Their colors became more explorative, with shades like green, blue and pink becoming popular.

For a number of reasons, few companies today make eyeshadows as they did in the 30s. However, you can still achieve a similar look with whatever eyeshadow you wish to use. It just has to be applied with the tip of your finger and finished off with a rub of vaseline to leave a lovely sheen. 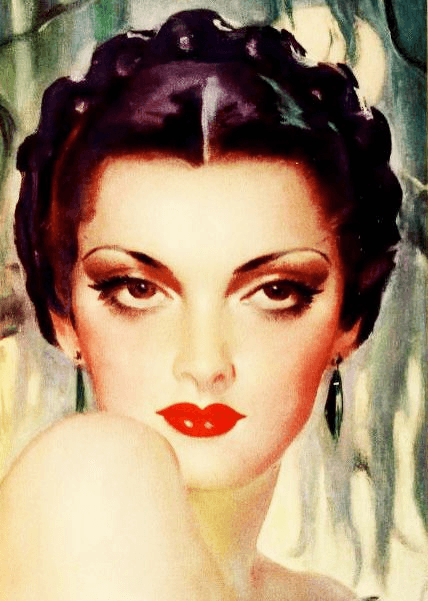 Lipstick colors saw a massive renaissance in the 30s. The most popular ones were maroons and dark reds, although oranges and raspberry tones were also common.

Women also started taking the time to adjust the color of their nail polish to match their lips, and this led to the rise in popularity of lipstick-nail polish bundles.

The lip-line of the 30s was longer and sleeker. Popularized by Joan Crawford, a common style was to apply opaque lip color to the naturally pigmented part of the upper lip to make it appear larger.

The lipstick worn by the common woman was almost always red. It was applied by a lip brush and blotted before being reapplied again. This needed to be done because the formula that was used in 1930s lipsticks was very heavy.

Popular lipstick looks from the 1930s include:

In summary, the woman of the 30s was classy, elegant, and fun, but not too fun. The times had changed and she changed along with them. Most of the elements of her look would actually fit right in with what we have today. Except for the pencil-thin eyebrows, perhaps.

You might also want to look at the following:

What were Women's Hairstyles like in the 1930s?
Fashion from the Past: All About 1930s Style
Retro Fashion for Men: What Clothing did Men Wear in the 1930s?