Timothy Walter, popularly known as Tim Burton is a producer, motion artist, film director, poet, writer, artist, and the man behind the films with dark fantasy, spooky and horror. Most of his films gives off a dark gothic feel. The characters usually have sad stories and have painful, lonesome childhood. Some has experienced true rejection while growing up and others see themselves as a failure. The characters have pale skin and they wear dark gothic clothing. Some were set in Victorian and Medieval era. Monsters and weird characters were always there. He’s also known for his recurring collaboration with Johnny Depp and Helena Bonham Carter who both got numerous films with him.

Tim Burton is known for his recurring collaboration with Johnny Depp who has acted in numerous films of his. Johnny Depp is Tim Burton’s close friend, and they’ve been doing films together for almost 20 years. Burton have explained their relationship as somewhat “abstract”. Most of Burton-Depp movie collaborations were feverish and remarkable. Depp’s roles have been really famous from the young to the old. Especially for Halloween parties Depp’s costumes are a popular go to. Many of the characters played are also seen on various Johnny Depp t-shirts and tank tops.

Helena Bonham Carter is Tim Burton’s domestic partner for 11 years. She met Burton while filming for the movie Planet of the Apes. He casted her on several films like The Big Fish, Corpse Bride, Sweeney Todd: the Demon Barber of Fleet Street, Alice in Wonderland and Dark Shadows. Often paired with Johnny Depp, their collaboration has been dynamic and most of their films were a huge hit. 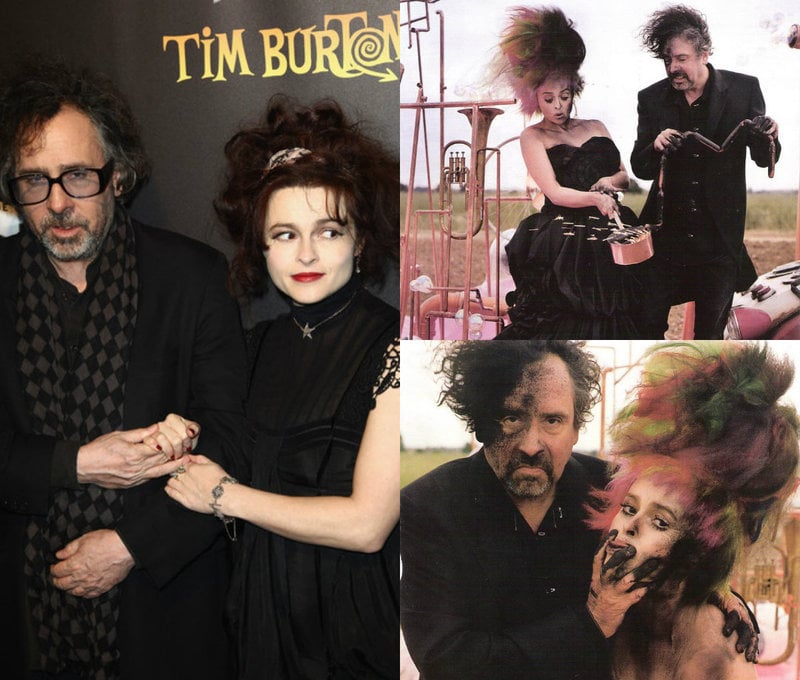 A comedy fantasy film about a young couple who met an accident and died. Unable to accept their tragic fate, they went back to their house to haunt it. They soon found out that the Deetz family along with their goth daughter Lydia (Winona Ryder) has moved to the place they were living in. The Deetz’s started transforming their house into a pastel toned modern art home. The dead couple asked for help in order to drive the family away. Since Lydia was obsessed with death, she had the ability to see ghosts. A deceitful and devious ghost named Beetlejuice (Michael Keaton) from Netherworld scares every person who tries to live in that house. In the end, the Deetz’s and the dead couple agreed to live in harmony, while Beetlejuice was found in the afterlife reception area, with his head shrunk by a powerful witch doctor. 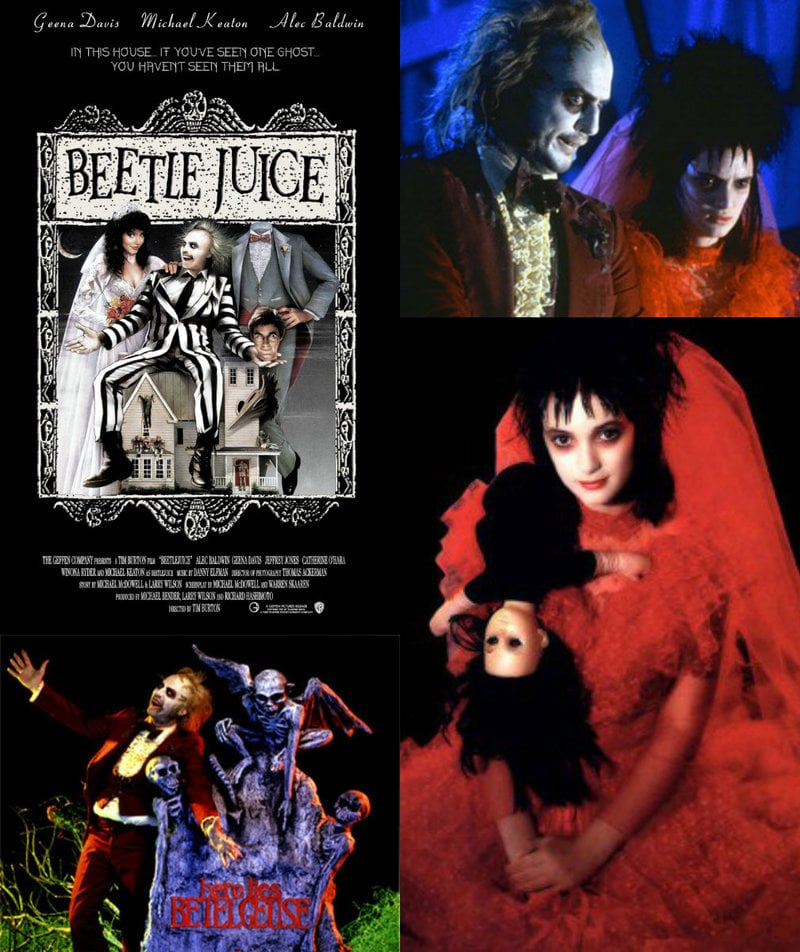 The romantic dark fantasy tells the story of Edward (Johnny Depp) an artificial man whose hands are made up of scissors. Yes, instead of hands he has a pair of cutting tool. A multi-functional pair that can be used for cutting hairs, grooming grass and ice-sculpting. He wears a black leather and latex with lots of buckles. He’s pale, with old elevated scars in his face. and hollow cheeks. Dark under eye circles and dark lips. Being innocent and naive, people take advantage of his kindness. He falls in love with the suburban family that has taken him and Kim (Winona Ryder), Edward’s love interest. 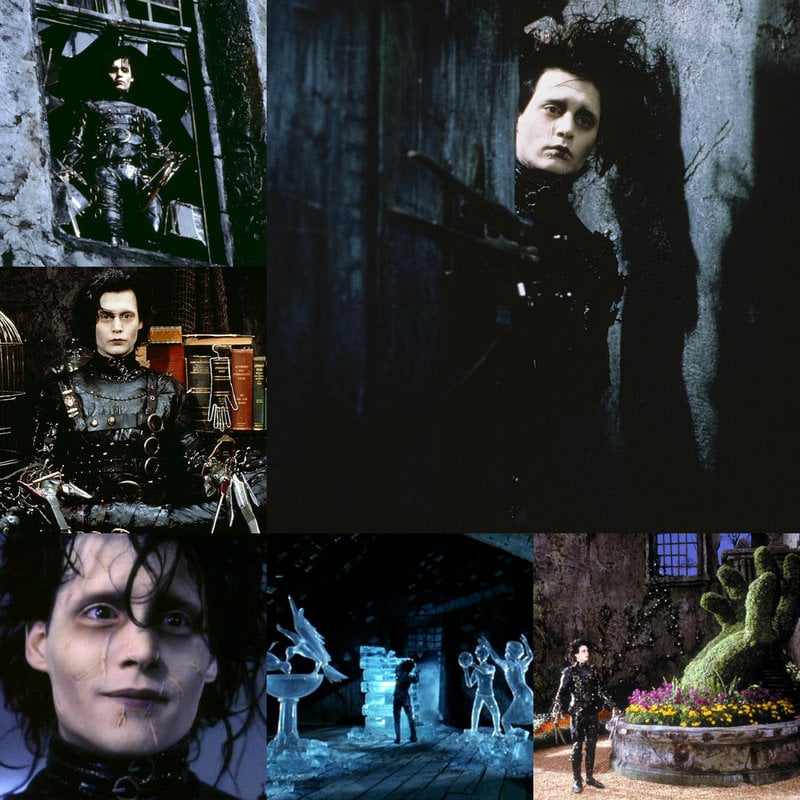 C) The Nightmare before Christmas (1992)

The pumpkin king at Halloween Town, Jack Skellington (Johnny Depp) has been an icon for the emo subculture. He’s well known as a black and white character that has a round head and a long stick-like body. He wears a black and white stripped suit with a bat as his bow. His face is more of like a fusion of a pumpkin and a skull. Jack, who was bored one day at Halloween Town discovered the door to Christmas Town. Thinking that it’s a happy and nice place, he wants to replace Santa Claus and starts dressing as Sandy Claws. Instead of bringing joy and happiness to children, he brings terror and horror to the parents as the kids receive decapitated heads and gory and spooky stuff.

The movie was released in 1992, a decade before Tim Burton really hit it big! 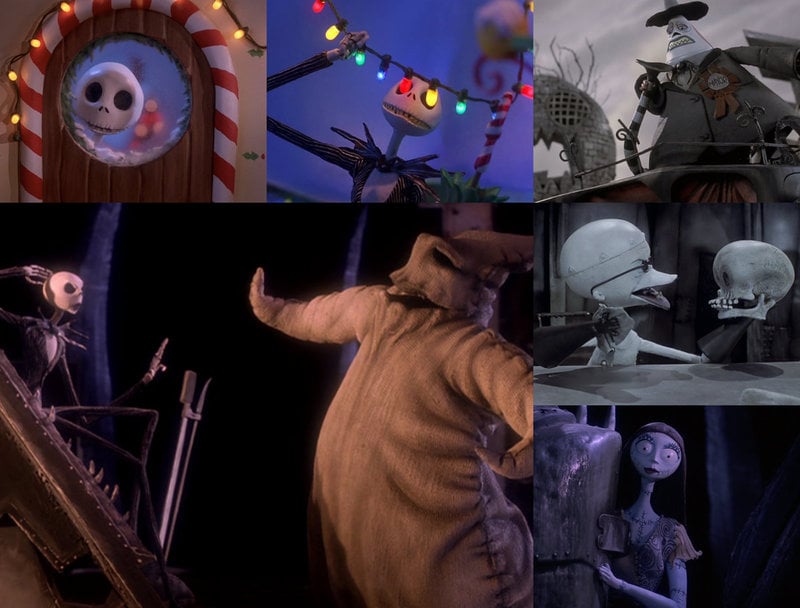 Penguin (Danny DeVito) is a deformed psycopath who lives in the sewer with penguins and carries an umbrella with deadly tricks and weapons hidden in it. A business tycoon named Max Shreck (Christopher Walken) found out his secretary Selina Kyle (Michelle Pfeiffer) has found out his plan for Gotham City and he pushed her out of the window towards her death.  A flock of alley cats licked her corpse, and she turns into Catwoman. Batman (Michael Keaton) protects and defends Gotham City. 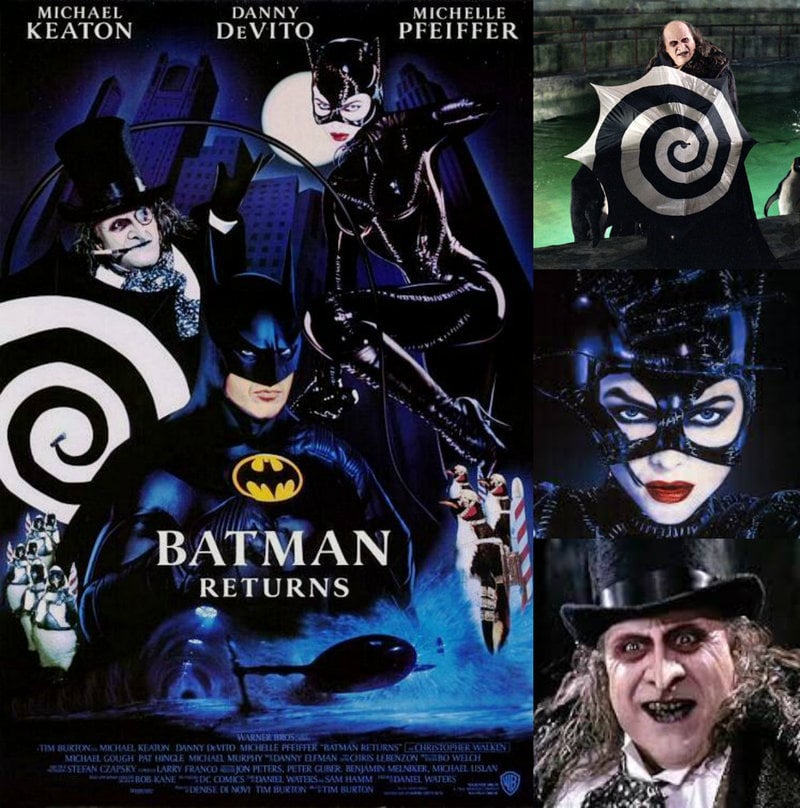 Martians have invaded earth and began a massacre on people and politicians.

Sarah Jessica Parker portrayed the role of a newscaster named Natalie Lake with a chihuahua. When she was abducted, the martians performed a “surgery” and attached her head to a chihuahua’s body. The invasion was unstoppable and they devastated the whole world including the White house, until they found out what could kill thebig brain and skull- like face aliens. It’s the song “Indian Love Call” by Slim Whitman. Their heads explode as soon as they hear it. This film features dark comedy and political satire. 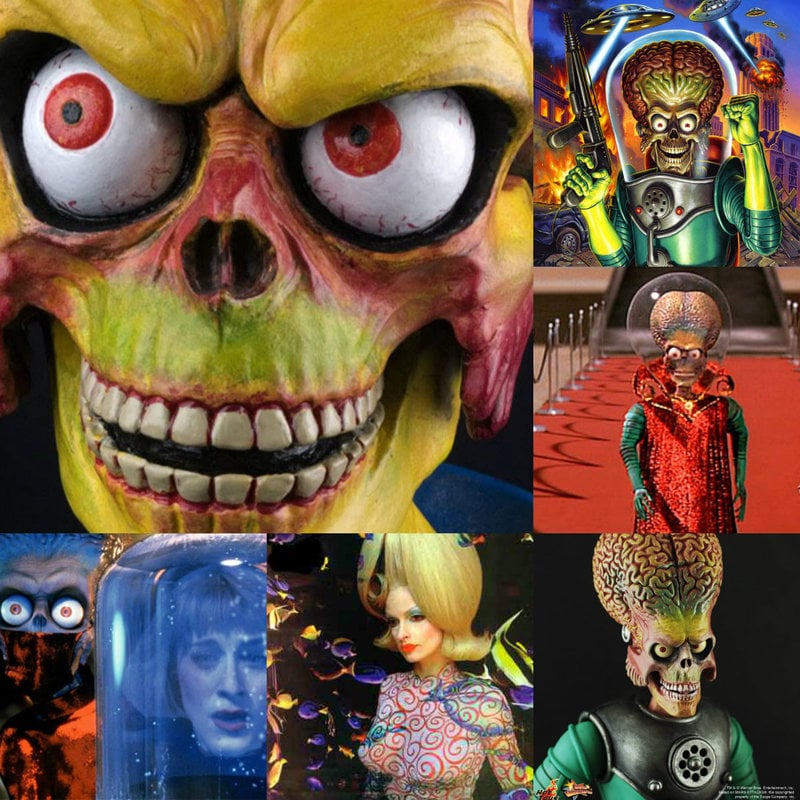 Ichabod Crane (Johnny Depp) is a police officer who is sent to investigate about the death of three decapitated people in a place called Sleepy Hollow, only to find out the mystery of the headless horseman that attacks at night. He stays at the house of the wealthiest family in town, the Van Tassels and falls in love with their daughter Katrina (Christina Ricci). She revealed the tree of the dead to Ichabod, and upon digging through they find a skeleton without a skull! Katrina’s stepmother, Lady Van Tassel (Miranda Richardson), got the missing skull and has been controlling the headless murderer.

The curse is broken when Crane throws the skull to the headless horseman and takes Lady Van Tassel on his ride to hell. 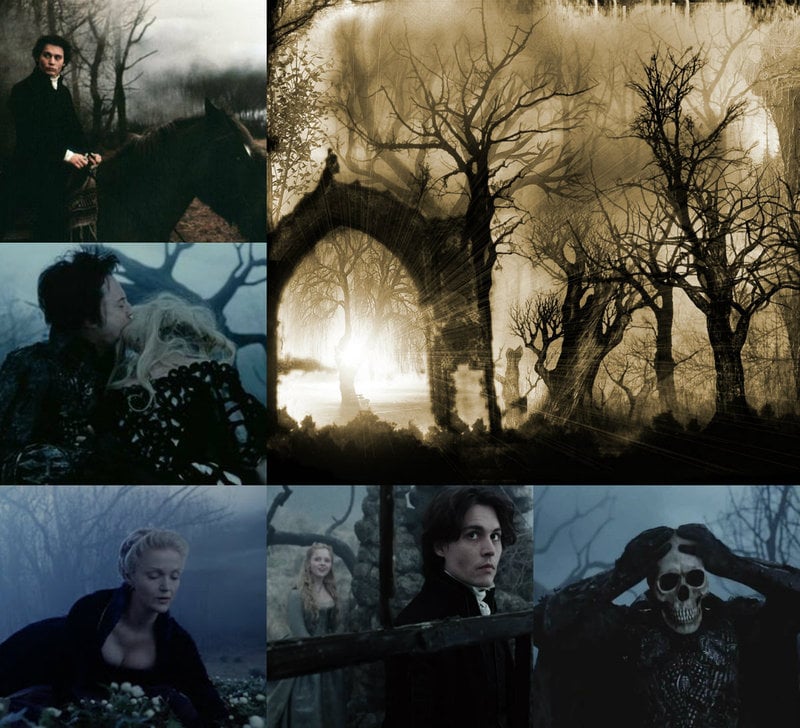 It is the story of Victor Van Dort (Johnny Depp) who was supposed to marry Victoria Everglot for a supposed arranged marriage, but both of them fell in love with each other upon first sight. During the rehearsal of their wedding, Victor couldn’t remember his vows and has created ruckus inside the wedding hall and was scolded by Pastor Galswells. Confused and embarrassed, he goes to the woods to practice his vows and places the ring on an upturned tree root, accidentally awakening Emily (Helena Bonham Carter) a corpse bride who was buried under the withered tree.. 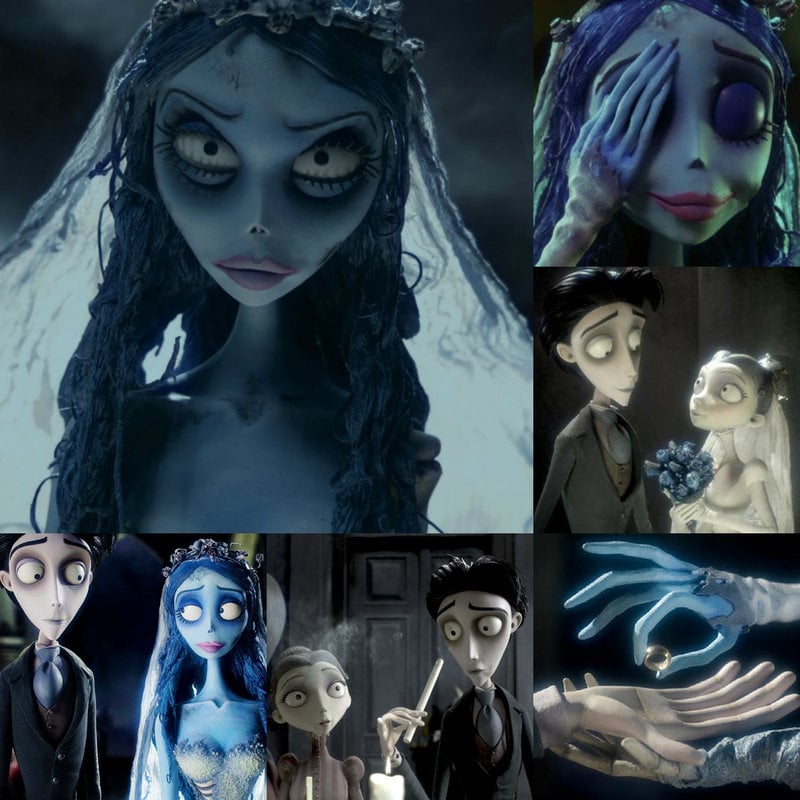 Willie Wonka (Johnny Depp) owns a chocolate factory and has announced a contest where 5 golden tickets are hidden inside Wonka bars and whoever finds it will have a tour in his chocolate factory, and a chance for an unknown amazing prize.

Four tickets were quickly found. A fat kid named Augustus Gloop from Düsseldorf, spoiled brat Veruca Salt from London, a boastful girl named Violet Beauregarde from Atlanta and the arrogant Mike Teavee from Denver. The last golden ticket was claimed by Charlie Bucket (Freddie Highmore), all thanks to Grandpa Joe. The kids were amazed by how wonderful the sweet smelling and interesting look of the factory.  The factory is all managed and operated by the Oompa Loompas. However, all bad and rotten kids had a bad fate, apart from Charlie who was in the end announced as the grand prize winner, the new heir of Wonka’s Factory. 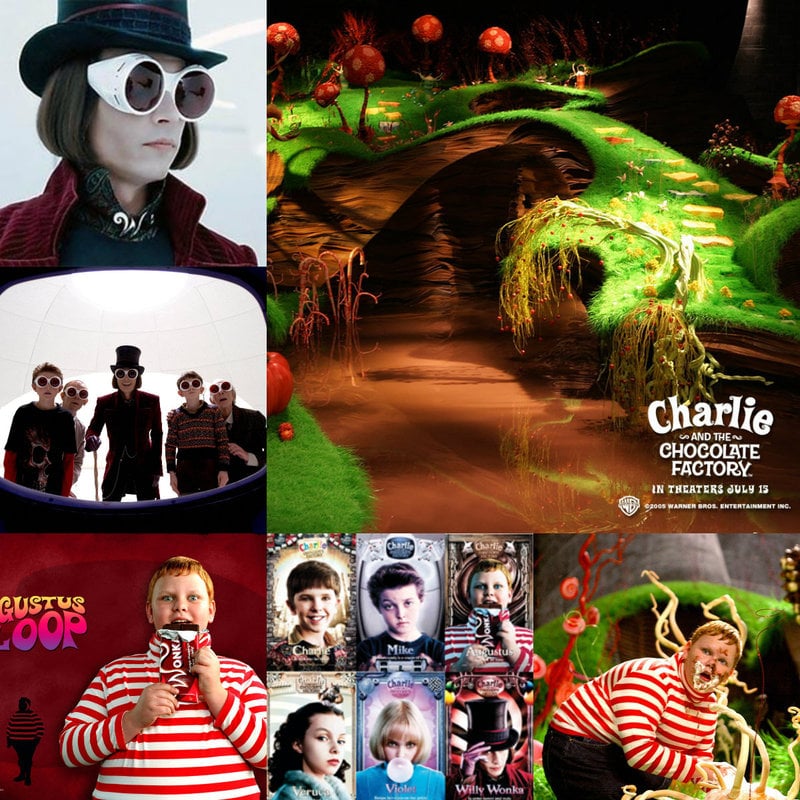 It’s an adaptation of a gothic musical thriller by Stephen Sondheim, in which a barber and serial killer named Sweeney Todd (Johnny Depp) takes his revenge when he opened his barber shop and starts shaving every man’s head and they were never seen there after. The movie is considered to be dark and bloody, as its original musical is considered to be the bloodiest of all. Mrs. Lovett (Helena Bonham Carter) plays as Sweeney’s accomplice and makes “meat pies” from the corpses. 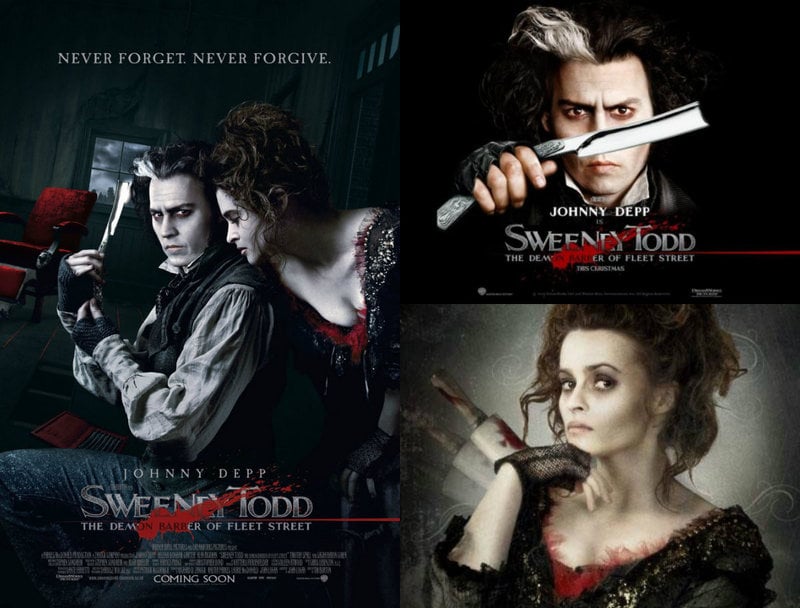 Nineteen year old Alice Kingsleigh (Mia Wasikowska) has attended a party at Lord Ascot’s estate, only to get a marriage proposal. Confused and unsure, she followed the white rabbit wearing a blue waistcoat and accidentally falls into arabbit hole that leads her to Underland. She is then met by the Mad Hatter (Johnny Depp), Red Queen (Helena Bonham Carter) and White Queen (Anne Hathaway).

Alice beheads the Red Queen’s Jabberwocky, a dragon like creature controlled by the Red Queen,  resolvs conflicts which leads to the battle of the end of the Red Queens reign. 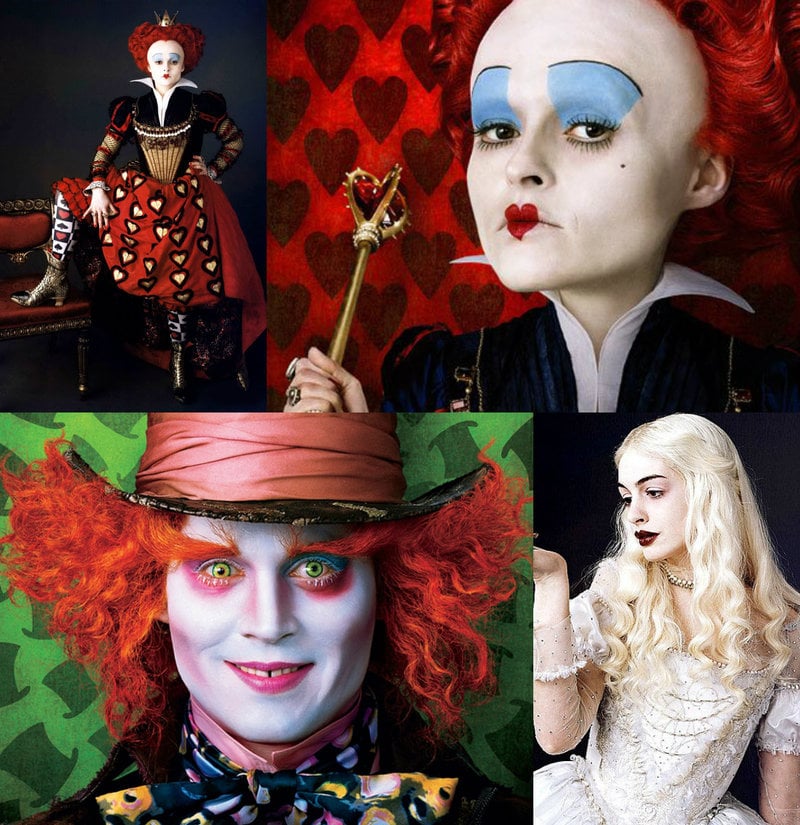 Barnabas Collins, an ordinary man was turned into a vampire by a curse. A girl named Angelique was so fond of Collins, she couldn’t accept the fact that Collins loved another girl so she cast a spell on him and his girl. He got locked up in a coffin for a hundred years, and was unearthed by modern men. He then begun sucking their blood. Barnabas went back to his ancestral home to protect his descendants and found the immortal Angelique living in a modern world and their battle continues. 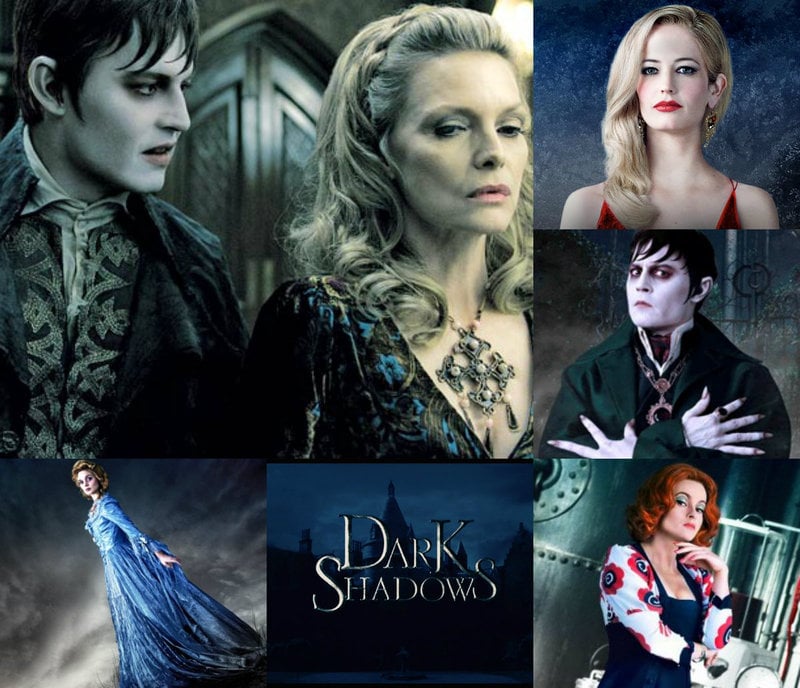 Vincent, a young boy with a pet dog named Sparky. One tragic day, Sparky run towards the street and gets hit by a fast car. Vincent misses his dog and he learned from his Science class that the currents produced by lightning can awaken corpses. Vincent therefore brings his beloved dog back to life, only to cause terror to his school and to his community. 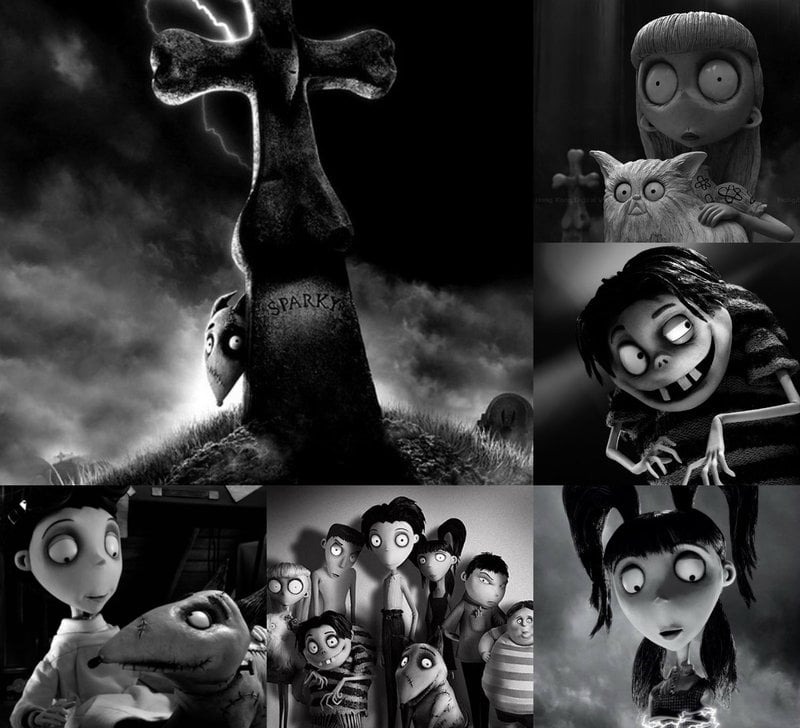 Tim Burton always spurs our imagination while entertaining us at the same time. His visionary work will always contine to expand our imaginations and fashion sense. Watch out for our part 2 Tim Burton on the fashion trends spured on by him.

Quick trivia: Which film did Burton try to team up with Walt Disney to produce but was turned down due to the movie’s dark concept and eerie characters?