How to Be A Steampunk Dandy: Fashion, Accessories And Attitude!

It is rare to find a fashion trend more aesthetically pleasing than steampunk. It’s elegant and quirky and always well put together; members of the steampunk community wear their threads, leather, and buckles with immense pride. And rightly so. The alternate universe way of dressing one’s self captivated many a creative soul when it first really gained traction as an alternative to cyber-punk in the late 1980s. 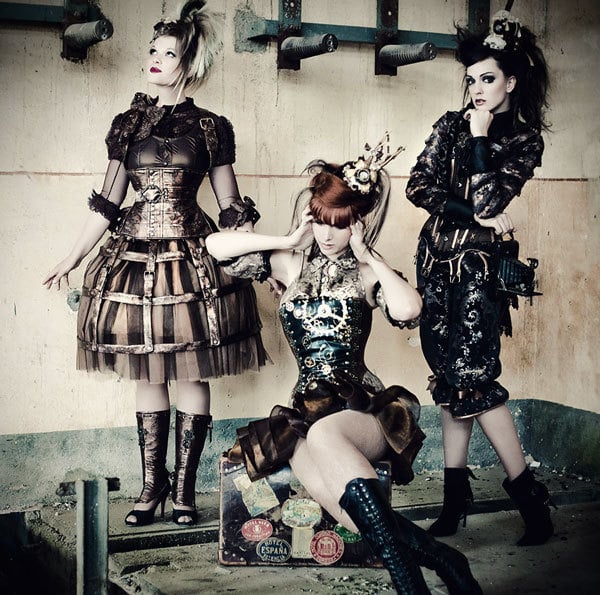 Since then it’s gone through a renaissance and more or less entered mainstream culture, especially design wise, while still maintaining its underground roots and soul. It has also begun to morph into further sub-sets. The classic, more or less, is Victorian steampunk. With its bustles, top hats, and antiquated accessories; this is the image most people conjure in their mind when asked what steampunk fashion is. Afterall, the entire idea of steampunk has to do with the question of what our world would be like if we had gone the steam route during the Industrial Revolution. 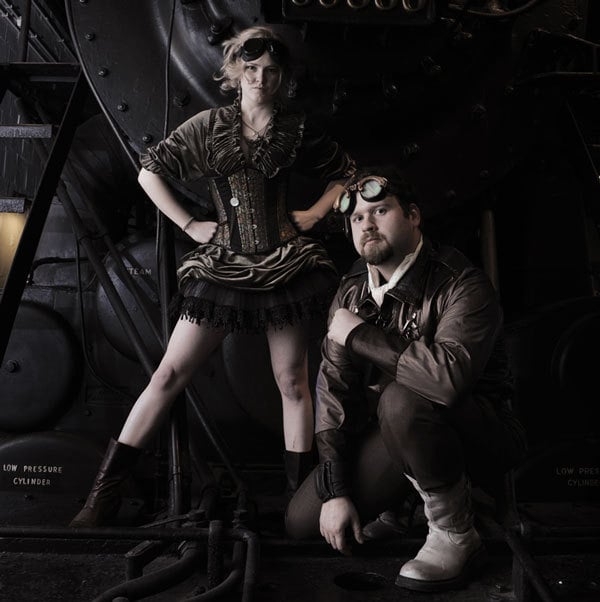 A Variety of Steampunk

There are now a few different subgenres of traditional steampunk style, each equally as interesting and beautiful as the next. There’s gothic steampunk with a focus on corsets, leather, and skull detail. There’s also the American western sort of steampunk, similar to the styles seen in the popular tv series Westworld. Here you have cowboys with mechanical guns, dusty settings, gears galore, and a fair amount of truly excellent skirts. And finally there’s the art nouveau sort of steampunk with fashion more closely associated with 1920s flappers, high society, and mobster; it’s what Victorian steampunk would have historically turned into. The steampunk gentleman became a steampunk dandy. 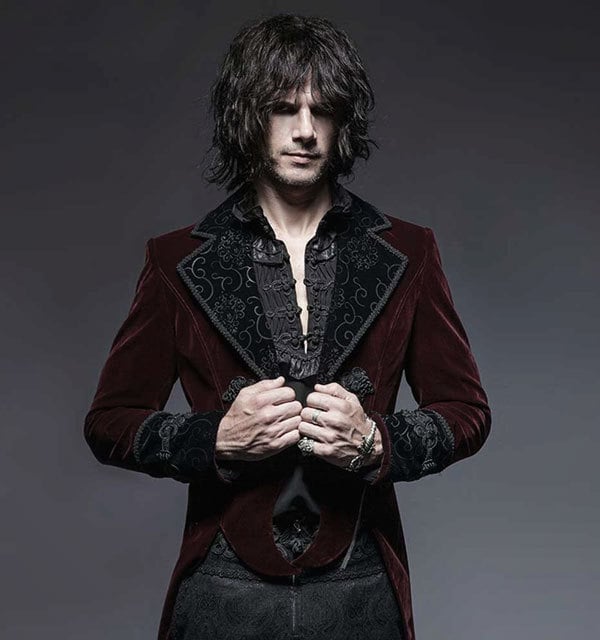 A Designer With a Steampunk Flair

And here is where we introduce Alston Stephanus, accessories designer and cosplayer by trade, who decided he’d occasionally rather dress as a steampunk dandy than in jeans and a t-shirt. The Singapore-born Indonesian had taken a liking to vintage fashion, especially from the 1930s, a few years ago and has since expanded and developed his personal style, and brand, to reflect living a life filled with an old-school aesthetic. This included a lot of steampunk influence and incorporating it into his everyday wear. 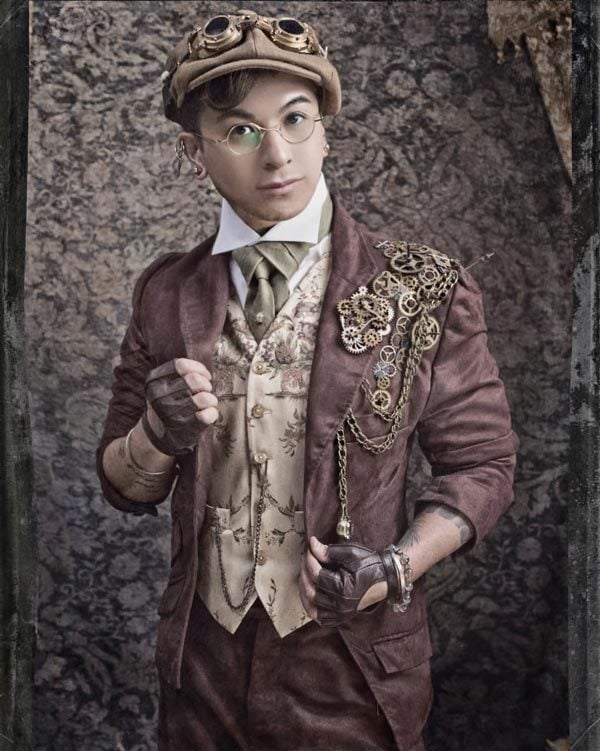 Alston always goes the extra mile, wearing clothes from the actual era whenever he can. This involves lots of vintage store shopping, specialty shops, and frankly, a bit of luck. An extensive traveler, he will always stop into thrift and antique stores when he comes across them, as you never know what you’ll find. 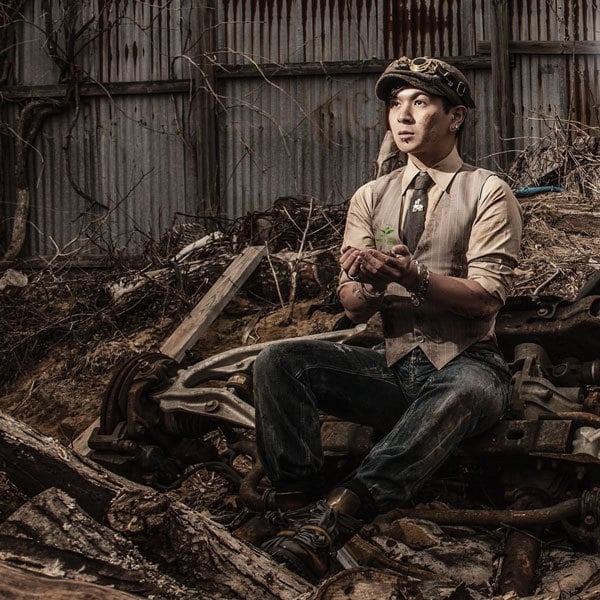 So how do you get the steampunk dandy look? Thankfully, Alston has the answer.

There are a few things that are kind of a must when it comes to steampunk fashion. While steampunk anything tends to have a general color scheme that could only really be described as various shades of brown, don’t let this be all you wear. Any color can be worn in steampunk as long as it has that aesthetic. 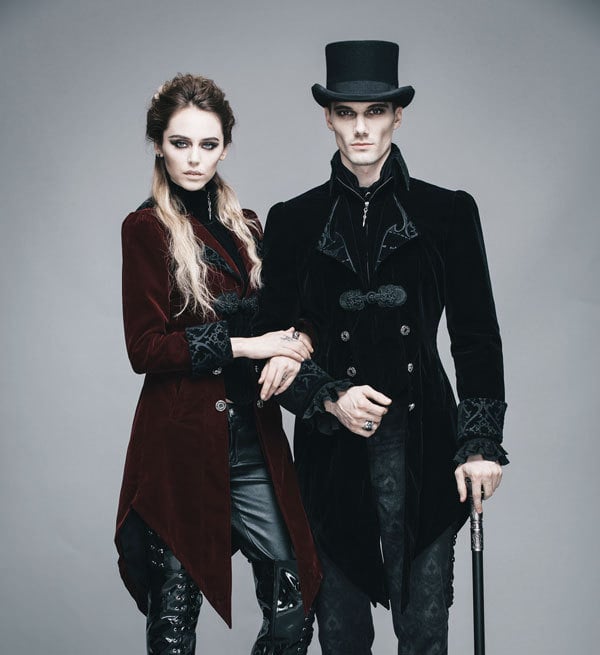 The 1920s and 30s were a time of bold colors and daring fashion, a complete departure from the physically restrictive fashion of the Victorian age. Ladies will want more free-flowing dresses for a nouveau look while men will still be rocking suspenders, but there are less jackets and more bow-ties. Wide and baggy steampunk style pants (ie knickerbockers) and oxford bags, and separates should be fully embraced. Of course, the three-piece suit is always a classic as well, and any proper dandy always has a suit.

Hats! When it comes to steampunk headwear, fedoras and boater hats are number one for gents and accessorized tophats, headbands and fascinators for the ladies. Adornments are key to giving a piece of clothing the steampunk look, so be sure yours has brass and gear detailing. 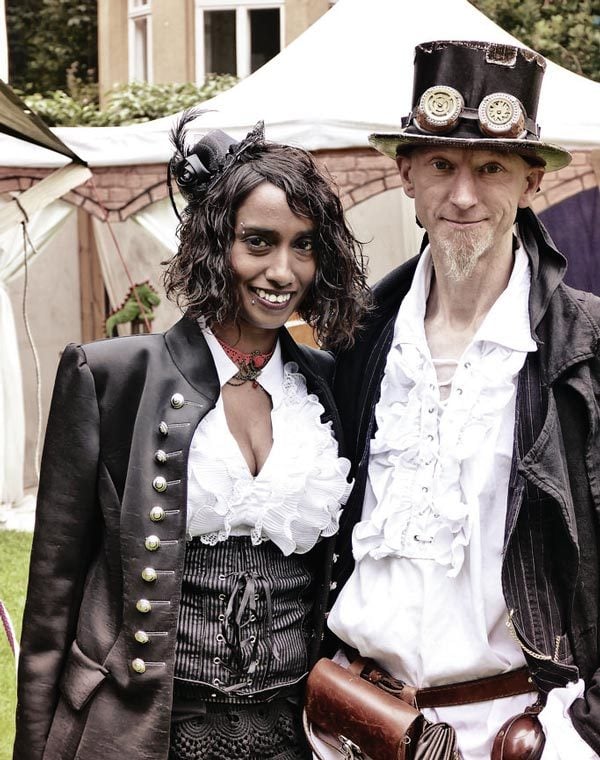 Speaking of detailing, goggles are a staple of many a steampunk outfit, and where better to wear them than in the era of flight? Victorian steampunk has the dirigibles and hot air balloons, but planes come later and are perfect for this look if you wanted to be a flying steampunk dandy.

And if you want to do something a bit more subtle, you can incorporate steampunk accessories into your everyday outfits.

The Art of the Pocketwatch

The pocketwatch. It’s a staple of steampunk fashion and one that transcends eras. Alston is always in the market for a new pocket watch, even though he already owns around twenty. These delightful time pieces range from the novel nerdy ticker to genuine antique watches.

There are four types of pocket watches to look out for, each having a unique design and use. The full hunter pocket watch has a cover on the front with a hinge; the covers are typically ornate and have engraved designs, proving both useful in protecting the watch face and being a piece of art. The half hunter pocket watch also has a cover, but crystal will be embedded in the center, allowing the wearer to see the time without opening it. 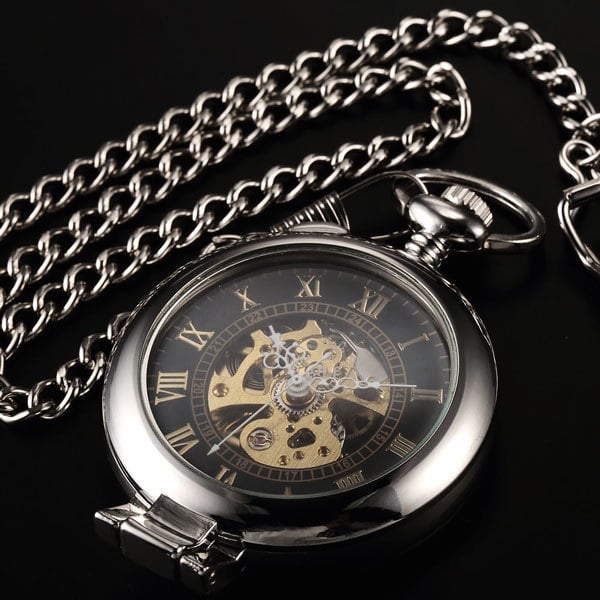 Meanwhile the double hunter pocket watch will have a front and a back cover, giving access to the gears within, this style is particularly popular amongst steampunk enthusiasts for obvious reasons. Last, but not least, is the open face pocket watch, which, as its name suggests, has no cover. The pros of this include easy access in being able to check the time quickly and showcasing the watch itself, but does leave the timepiece vulnerable. 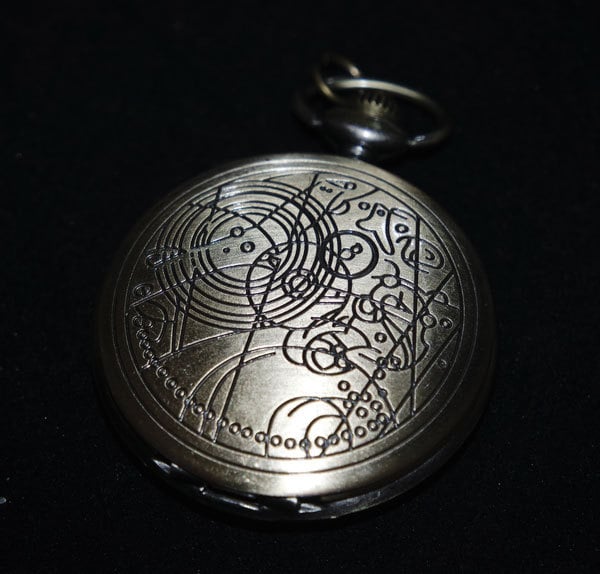 Getting The Authentic Pocketwatch Look

If you’re going for an authentic look, then perhaps the Doctor Who, Disney, and Star Wars pocket watches aren’t the best choice. Instead you’ll want to head to your local antique store or check out a flea market or two to get your hands on an older time piece. 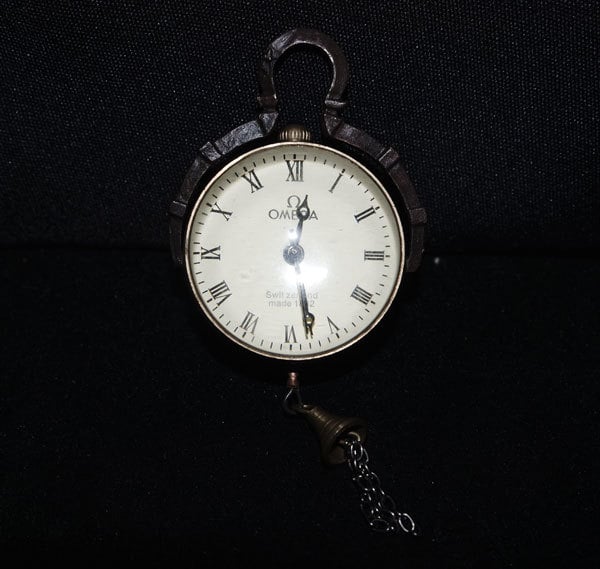 While the watch itself and its design is of course paramount to your outfit, don’t forget your chain! Chains are just as important, as are the ways to drape them. You’ve got the buttonhole chain that, predictable, secures itself by use of a button hole, then you’ve got the sport pocket chain that connects to a belt loop or button, and finally the Albert chain that can connect to multiple items. Charms can be hung on the chains to give some extra decor as well.

When he’s not designing accessories, running extravagant burlesque events, or working in the office, Alston is a professional cosplayer. He’s been a guest at a number of conventions around the world and his work has been celebrated at San Diego Comic Con for years. 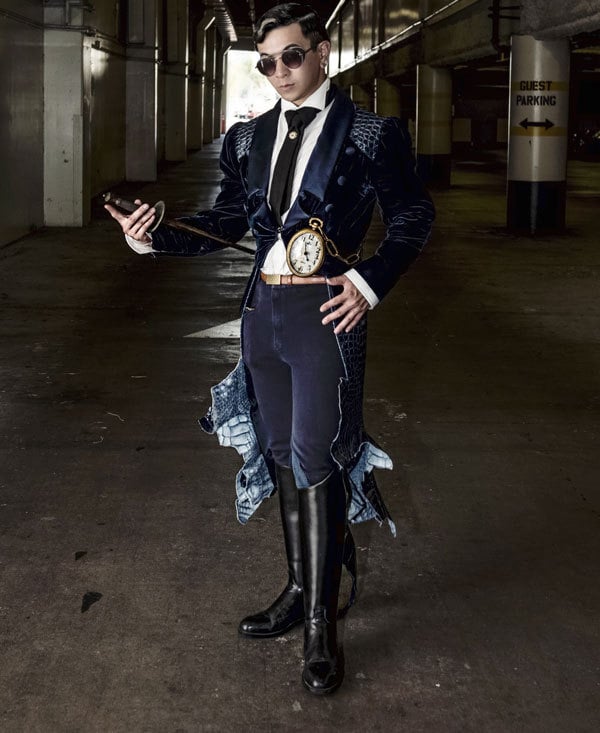 As such, he would be remiss not to include his appreciation for steampunk in his cosplay work At San Diego Comic Con, he was the crocodile in a Peter Pan cosplay group, and decided to make the croc steampunk, pocket watch and all. It just further cements the fact that you really can make anything steampunk with a bit of ingenuity. 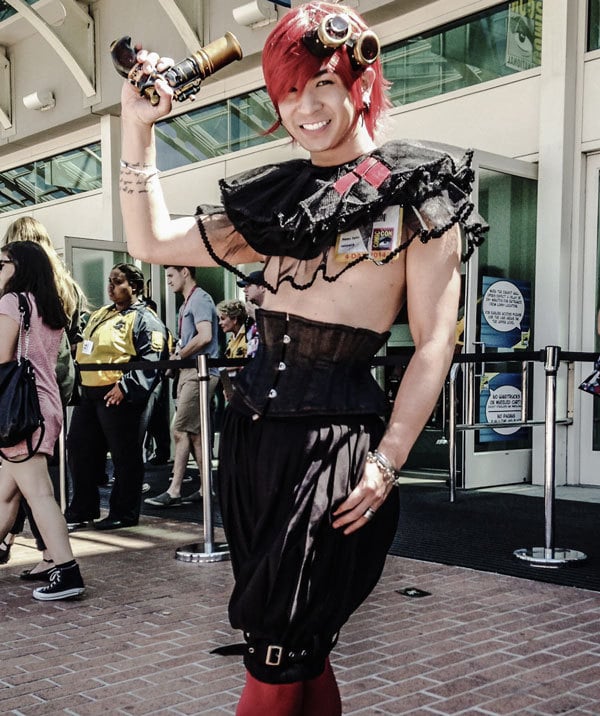 His steampunk genderbent Harley Quinn was definitely in line with his appreciation for a steampunk look. There’s even steampunk meet-ups at conventions now, celebrating and showcasing cosplayers who have transformed characters into a steampunk version.

The most important aspect of fashion is that you have fun, and this is something Alston truly believes in. “I dress this way because I want to. It’s for me. No one else.” 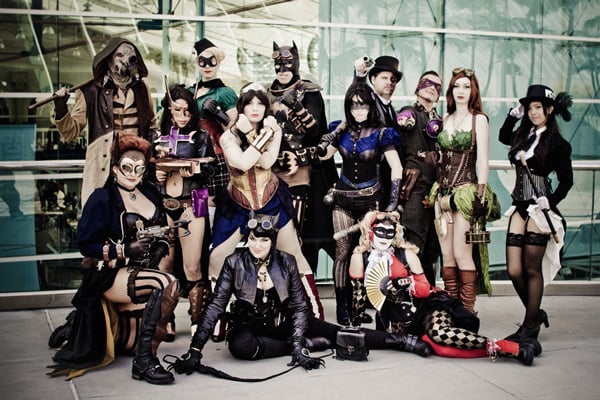 If that’s going towards a more 1920s and 30s style like Alston or sticking to the original Victorian aesthetic or just wearing a cute belt with a few gears on it -- great! Whether you choose to follow Alston’s lead and fill your closet with antique items and a passion for the past or go an entirely different way, at least you now know that it is entirely possible to be a steampunk dandy… and that’s rather wonderful.

Kristina Manente is a freelance journalist, podcaster, and all around audio nerd with a travel addiction currently living in Seoul, South Korea. Her focus is travel, culture, music, and anything geeky.

Following her love of travel, she started The Nerdventurists, which provides guides and tales from around the world with a nerdy twist. She’s been producing and co-presenting a Sherlock Holmes based podcast for the past five years called The Baker Street Babes, which was nominated for a Shorty Award in 2014 for Best Podcast.

Her work and social media can be found at https://www.clippings.me/kmanente.