Help! My Daughter Is Becoming A Goth!

Q: Help! My 16-year-old daughter is becoming a Goth. I’m worried about the kind of clothing she wears, it’s very provocative, and the crowd she’s hanging out with. They seem to be going out of their way to be extreme. The music is very dark, and she is so moody and unresponsive - I am worried she is depressed. There always seems to be some party she is absolutely desperate to go to. She even wants a tattoo! Could you give this worried mum any advice on how to stop my daughter’s Goth transformation? 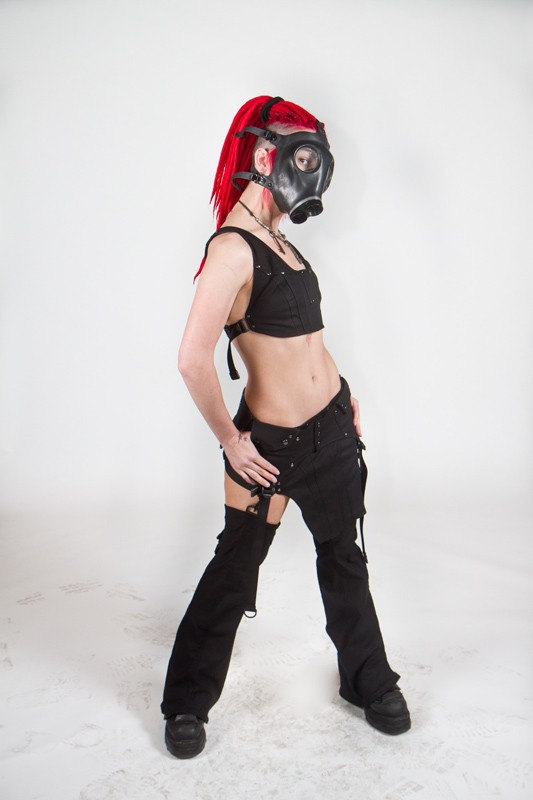 It can be a bit scary for parents when their teen wants to dress like this. Wire Girl Outfit, from Crisisware.

A: Hi Anxious Mother. I can completely see where you're coming from - it can seem a bit scary when your little boy or girl starts adopting a subculture you don't understand. The black, the new friends, the music, the moodiness - it's all part of her experimenting, exploring different aspects of her personality and figuring out what fits. If it weren’t Goth it would be something else. Punk, metalhead, bogan, bohemian, there are oodles of teenage subcultures your daughter could fall into. Your daughter is in her prime teenage rebellion years. She has to push the boundaries with something. So there’s no point blaming all things Goth for her sudden rebellion.

It’s likely the more adversity you pose to her new chosen sub culture the more distance she’ll keep from you. Instead of repelling her rebellion, try to understand. Talk to her about her experiences and what she finds so interesting about being Goth. Is it the music, clothing or social scene? Show a bit of interest and you might see her opening up!

I realize gothic culture can sometimes appear morbid, all the black and piercings probably don’t help. However it is full of really supportive human beings. A lot of people join the sub culture because they don’t feel they belong elsewhere and Goths are welcoming to unique people from all walks of life. This social group she’s fallen into may be one of the few places she feels accepted; particularly if she’s also facing rejection at home or school due to her new appearance.

It’s important to be supportive as her adoption of Goth culture may just be a phase, or a lifetime transformation. There’s no way you can tell until you’re allowed the luxury of hindsight. If you don’t support your daughter now, and she decides this is who she is, you may be doing unrecoverable damage to your relationship. Don’t let your focus on the gothic culture plague your relationship with her. She’s still the same person after all.

I realize at 16 there are probably concerns about what she is doing. Is she hanging out with older people? Is she drinking? Drug taking? Will she get a permanent tattoo or a piercing she may regret later? My advice to you here is that you need to continue to set reasonable boundaries. However don’t ban things entirely. If there’s a party she’s desperate to go to. Let her. If you don’t, no doubt she’ll find another way to get herself there. I have distinct memories of sneaking out late at night. No way was I going to let a simple “no” stop me. You don’t want to wake up and find your child gone with no idea where she is.

That doesn’t mean you let her go unrestricted though. Drop her off and pick her up at an appointed time. That way you can bring her home at a reasonable time and if she’s exposed to drinking you’ll know about it. This also gives you a chance to interface with her friends. They can get to know you. You might even be the “cool mum” as no doubt they are struggling with acceptance from their own parents too.

To summarise, your daughter’s new found love of all things gothic may be a phase or may be a permanent fixture. You need to let her explore this in her own time and with support from you. Otherwise you risk being pushed away. Don’t ban anything entirely but set clear boundaries that loosen up as she gets older and builds trust with you. Finally, she’s your kid – love her!