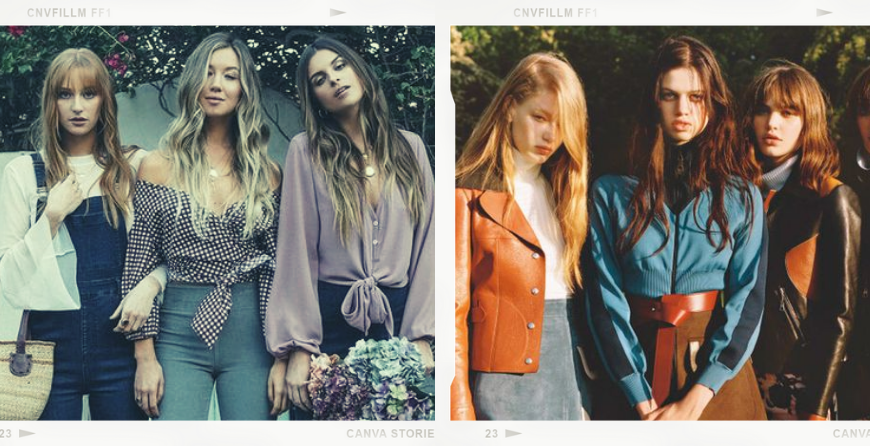 A lot of our fashion trends today were from the past. The styles from the 1980s are very much alive today. This decade was pretty much about extravagance and excess, and while minimalism is still pretty big today, the opposite aesthetic is also true.

Flashy is an understatement for the 80s fashion. Women were strutting in their sequined dresses and large hoop earrings, while men were similarly bombastic with shart suits and dramatic hairstyles.

And while dressing head-to-toe in 80s fashion can be cool, it was still the 80s — only some of the trends have made it to see the light of the 21st-century fashion. So before you start pairing spandex tights with a neon crop top, let’s take a look at the 10 retro 80s fashion styles to play around with in 2021. 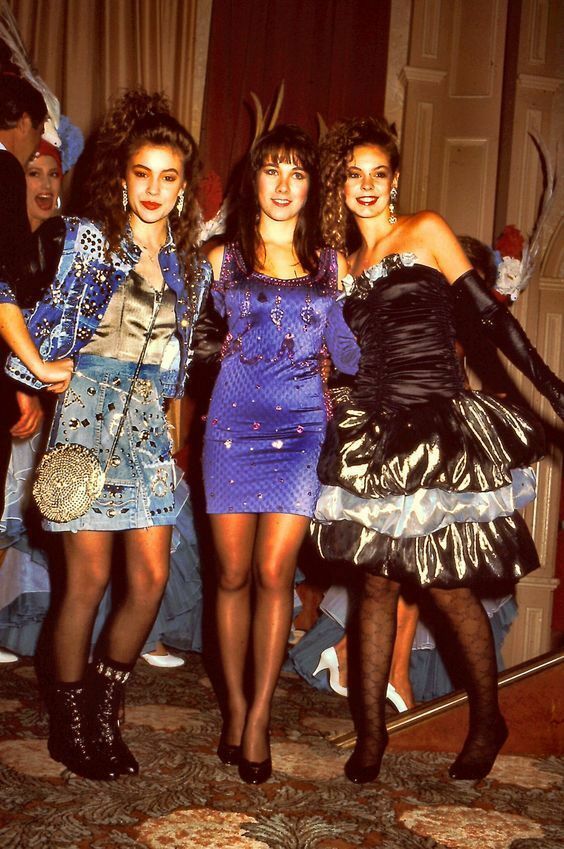 Let’s all admit that the 1980s fashion had some pretty audacious trends, and let’s all also admit that some of them should be left in the past. It was all about big and bigger back then. The bigger and flashier the clothing, the more of your wealth and prosperity you were displaying.

And when I say flashy, I don’t mean in terms of skin. I meant in terms of colors, prints, and silhouettes, from clothing pieces to makeup and hair. Nothing was overlooked. The 1980s ruled the dramatic and extravagant, so move aside subtlety!

Both women and men were pretty daring with their outfits day in and day out. If you think Air Jordan sneakers are a recent trend, you’re wrong! It has been a huge style since the 80s for men’s fashion. Athleisure was a thing of the past that suddenly became a thing of the present as well.

Other styles were in back then, too, from preppy and feminine fashion to edgy rock and sophisticated cool. You’d see a woman in a full power suit walking down the street with head-to-toe leather and spikes. Spiky hair and animal prints walk hand in hand with neon tights and tailored blazers. Any combination, you’d get it in the 80s. And that was a normal sight.

How could one decade be so eventful for the fashion world? We have a few iconic people to thank for that. 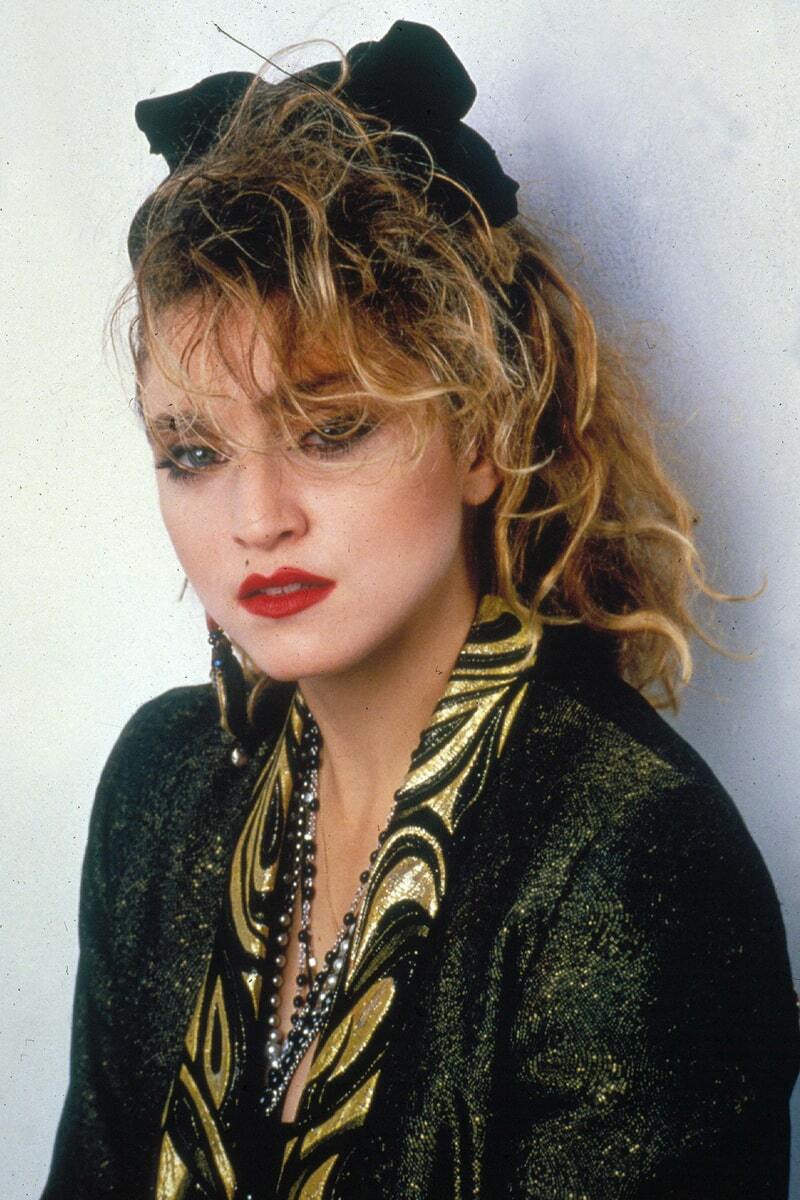 Every decade has its own handful of fashion icons who had influenced the trends. The 80s were no exception to this rule. Celebrities were still the leaders of styles back in this day.

Madonna is the first icon anyone would think of when it comes to the 80s. Flaunting scrunchies with a mix of leather and tutus, everyone looked up to her like she was the queen. Along with other singers like Cyndi Lauper, Madonna paved the way for edgy and punk looks of the decade, never too afraid to experiment with a different combination of styles.

Whitney Houston was also notable in the 80s for a different style. She went for a more glamorous look that was more sparkly and shines than one thought was possible. 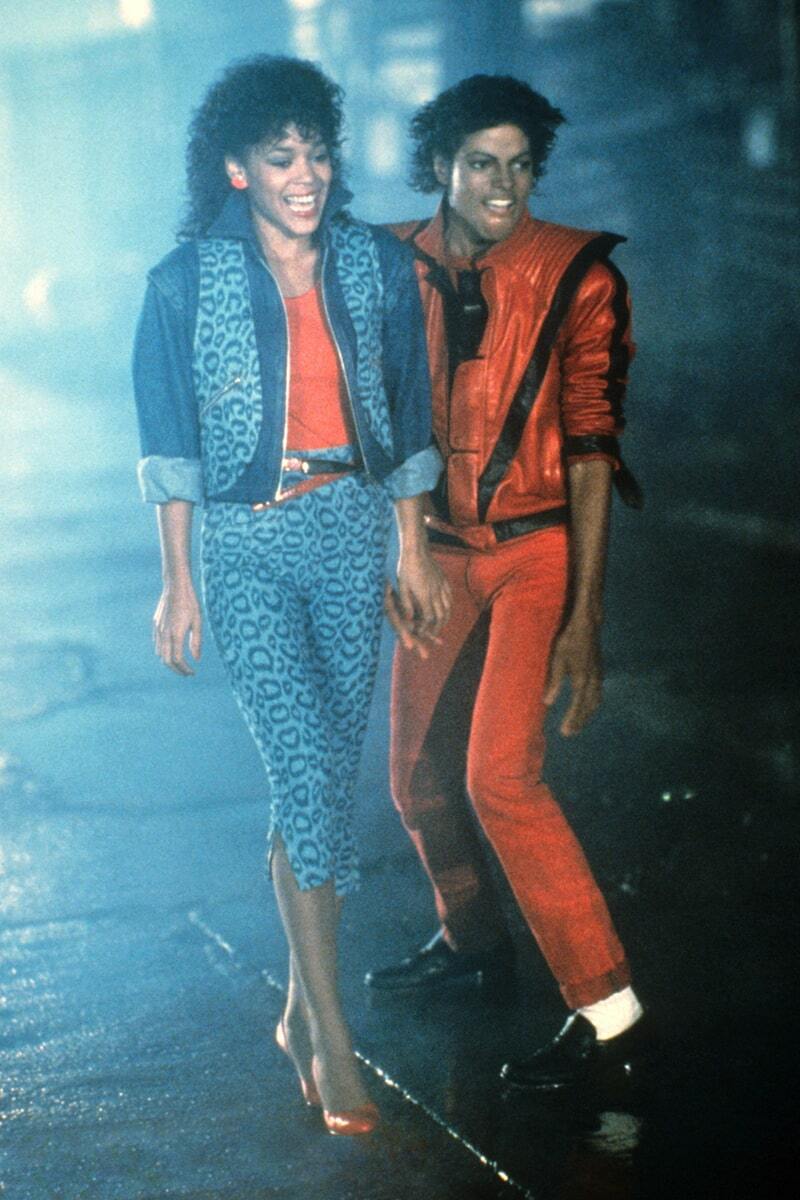 Let's not forget Michael Jackson’s influence. His signature style was a power jacket that many had copied during the decade.

Of course, who could leave out Jane Fonda, the original queen of fitness aesthetics? Everything from leg warmers and leotards to spandex and lycra, she’s the one we have to thank for. Now we have millions of workout videos online, but Jane Fonda was the very first person to make one.

So now that you’re aware of how dramatic and decadent the styles of the 80s were, you might be surprised as to how they can be styled today. Believe it or not, amidst the minimalist, black-and-white trends of recent years, a slither of neon, and a pop in shoulder pads have been rising.

Let’s take a look at the top 10 retro 80s fashion styles that you’re 100% able to rock today without the awkward glances and up-and-down strange looks. 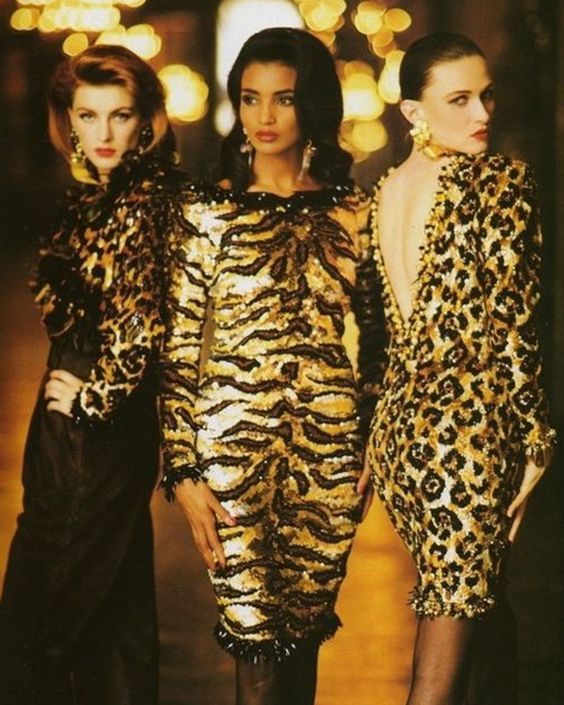 Nothing screams bold and excessive more than prints. Animal prints were all the rage in the 80s, and leopard prints were one of the most popular prints then. It’s no surprise that this style has been coming back because it oozes power and superiority, just like the animal itself. 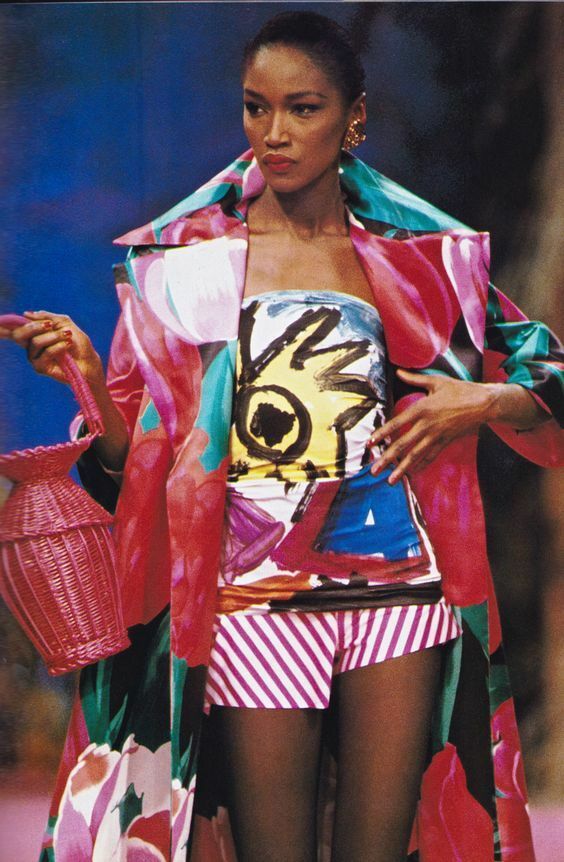 It doesn’t have to be animal prints. Bold and statement prints were pretty popular back then, too. Abstract shapes and graphic motifs were seen on runways and streets alike.

All these prints are so easy to pull off in 2021. You can dial it up or down by mixing and matching prints or pairing them with plain basics. The louder the colors, the bolder it is; the softer the colors, the more subtle it is. 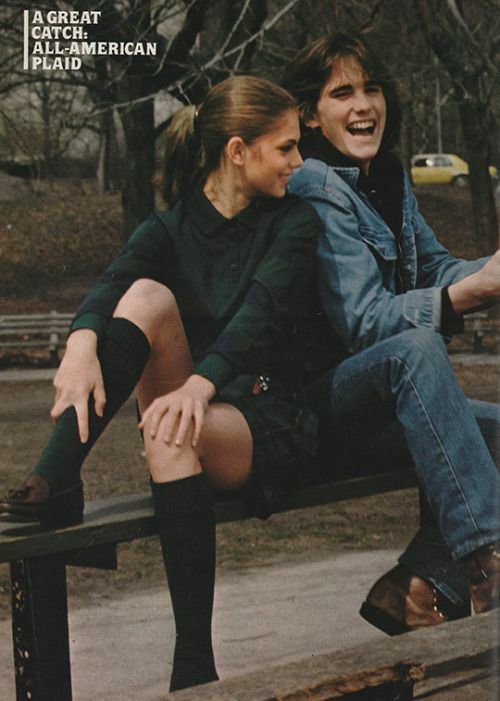 Why go for uncomfortable heels and chunky boots when you can hop on this 80s style of loafers? This decade isn’t only about being bold and dramatic. There’s also casual amidst it all. In my opinion, they’re a must-have in your footwear collection. Easy to style, convenient to whip on, and comfy as heck! 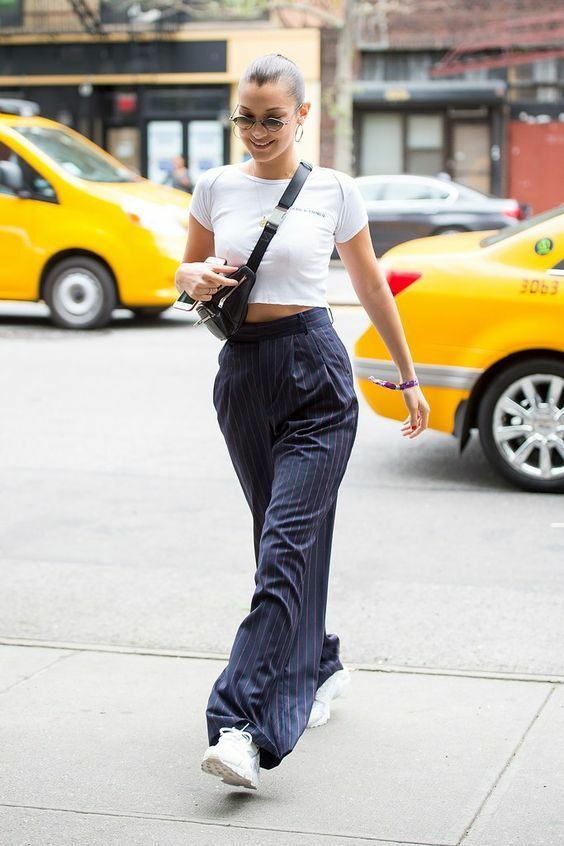 While this accessory started as a means of convenience and was treated as uncool, the 21st century has adopted this 80s fashion style and flipped the stigma around. Fanny packs are stylish now, regardless if you have it around the waist or across the front. 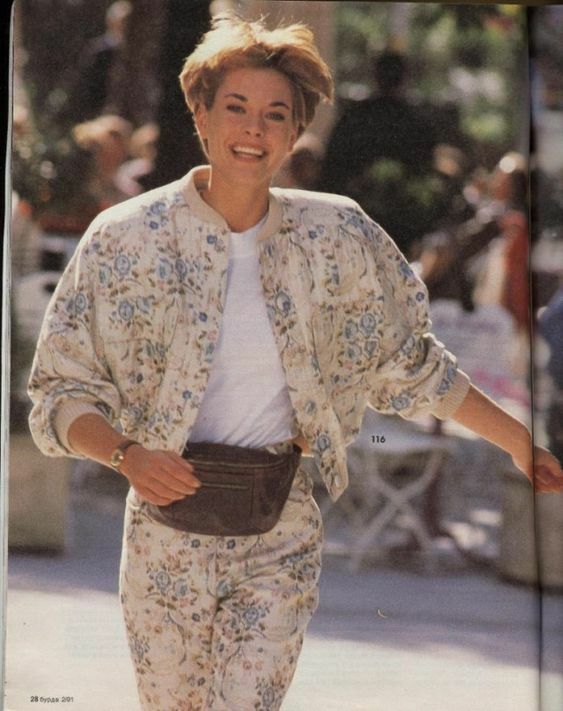 This flight jacket has made its way back onto the streets of the 21st century, and it’s become quite a staple piece for streetwear clothing. It comes in all shapes and sizes, and whatever color and print of bomber jacket you have, you’re not going to be sticking out. 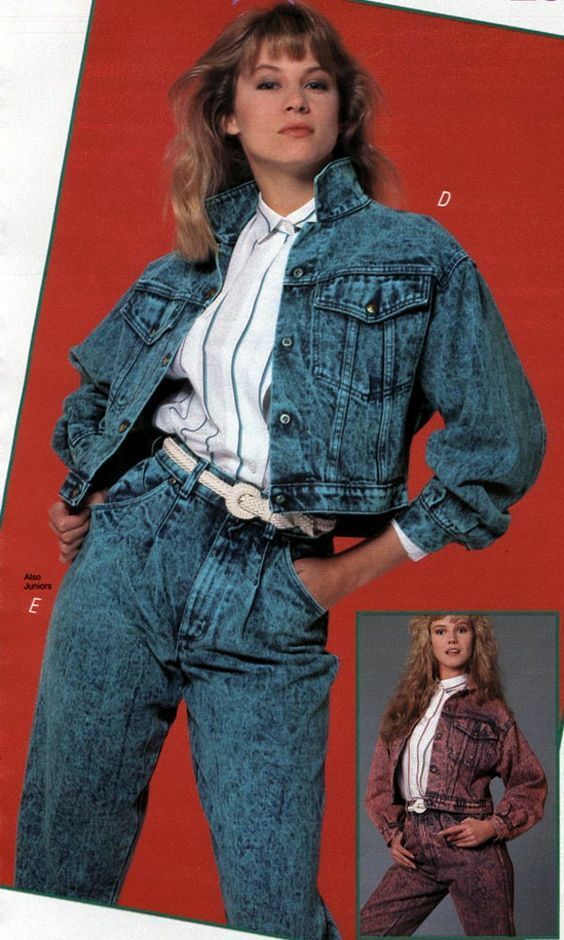 A denim jacket is sufficient, but to pull off the full 1980s retro look, pair it with denim jeans.

A denim-on-denim look is a bold statement that the 80s fashion couldn’t go without. The best part about this style is that you can rock it casually or fancily. Add more accessories to bling the look even more. 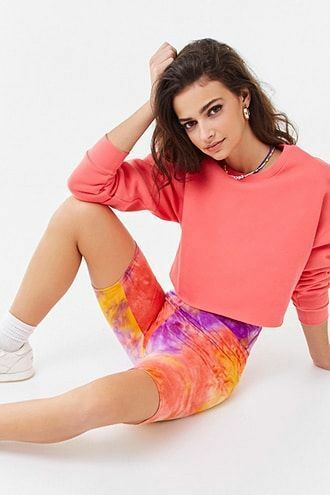 Comfy and chic are how I’d like to describe this 80s style. Athleisure is such a staple style over the past few years, and the 1980s spandex started it all.

Whether it’s going to the gym or going out for coffee, biker shorts under a jumper, or even a full tracksuit will instantly make you look put together instantly. Especially with the current global pandemic, this style is definitely a must-try. 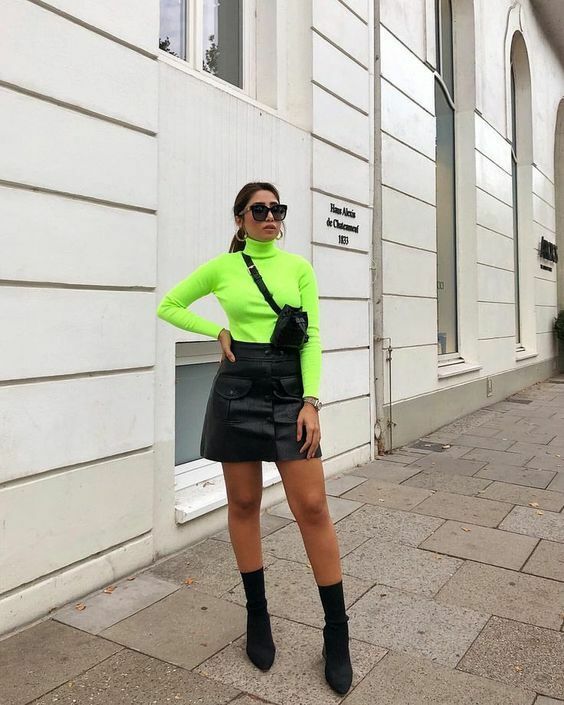 While the 1980s trend was neon head-to-toe, I don’t recommend it for modern-day fashion. Instead, a pop of it will go a long way. Say neon pink shoes with a full white or black outfit or a neon lime top underneath a neutral-colored coat. It’s the subtle use of neon that pops the whole look. 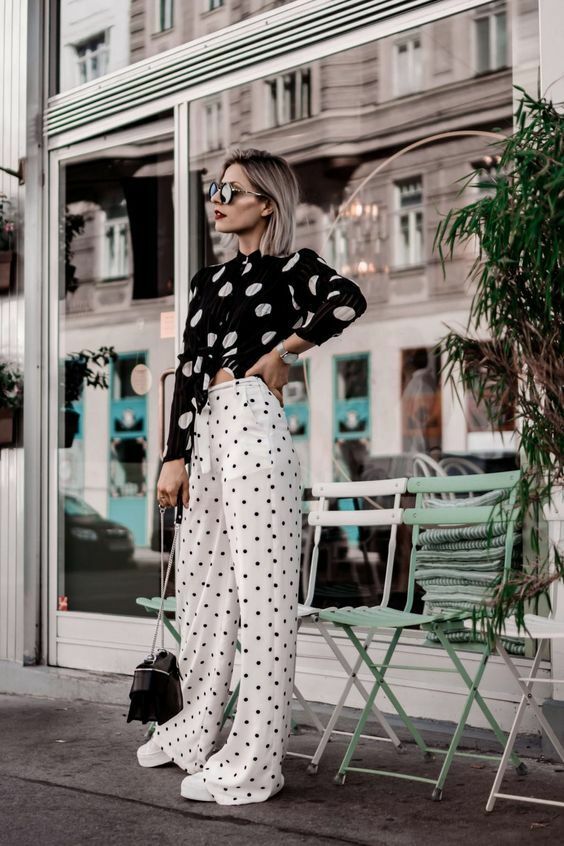 Animal and bold prints aren’t the only retro 80s styles making a comeback — the polka dot print can never go wrong. Leaning more on the preppier side, polka dot dresses, skirts, and tops were huge in the 1980s.

In the past few years, this polka dot trend has experimented with quite a bit, from matching it with denim trousers or any neutral clothing to stacking polka dot prints on each other. 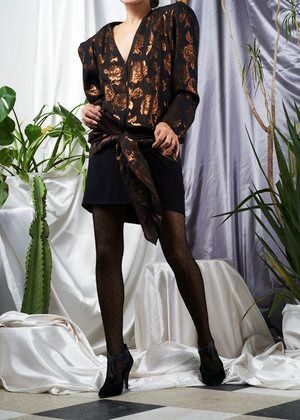 Who doesn’t like bows? The 1980s sure did. This bow-tied style was pretty huge. Back then, the bigger the bow, the better. This style has evolved to adapt the concept but not the size. Recently, bow-tied dresses, skirts, and tops are trendy but more subtle than in the 80s. 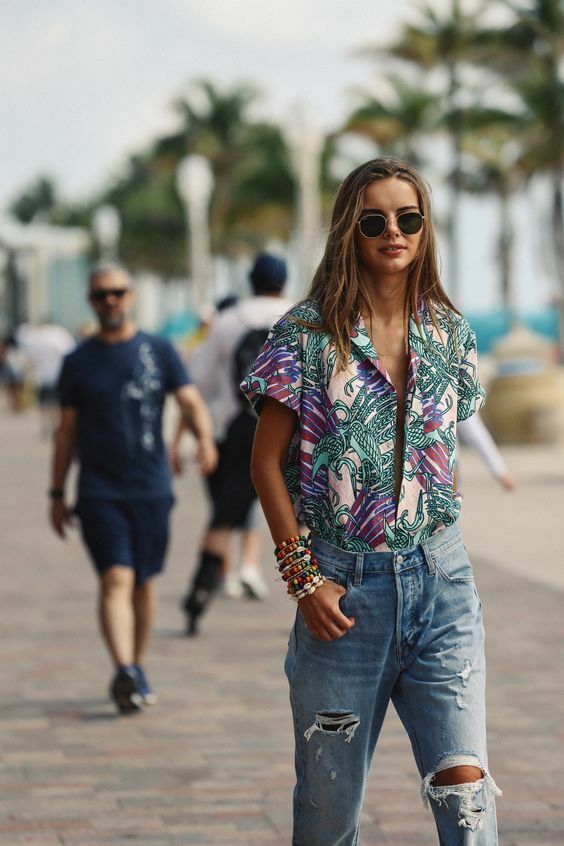 You don’t have to go to Hawaii to rock a Hawaiian shirt. During the 1980s, thanks to Magnum, P.I., this style skyrocketed through the roof. To match the top and accuracy to the television show, some men even grew out mustaches. Go all out or go home, right?

You can give the mustache a pass, but Hawaiian shirts are here to stay. This 80s trend has been making a huge comeback, with tons of luxury designers including the design into their collections.

Which retro 80s fashion styles are you going to try out if you haven’t already? I bet some of us have experimented with a few trends but didn’t know it was from the decadent decade of the 1980s.

Let us know which styles you think are going to be booming in 2021!

1980s Fashion - What Are The Most Popular Styles And How Do I Recreate Them?