A concert is always an extraordinary experience to me, and when you get to see three of your music heroes all in one place, it doesn’t get any better!

„Schattenwelt“ is a non-profit club with the aim of supporting the Gothic- & Electro scene of Austria and its neighbor cities and states. You can find music genres like Gothic, Electro, Industrial, but also EBM, Synth-Rock, Synth-POP, Gothic-Metal, Futurepop, Aggrotech, Harsh, etc. 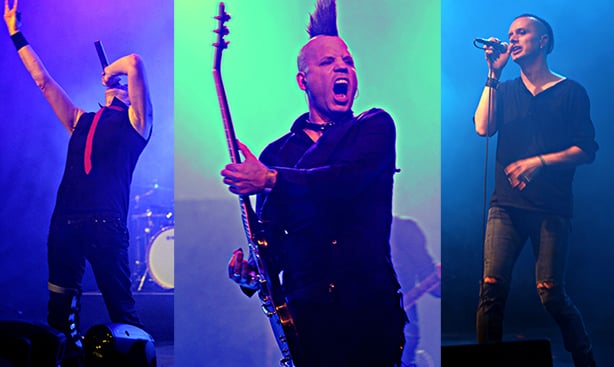 This year the festival took place on November 25th and 26th, also in Schwechat. A Shuttlebus service was organized from midnight to 04.30 AM from Schwechat to the underground station Simmering. Both one day and weekend tickets were available, with only a slight difference in price. Besides the live stage, there was a DJ stage with old school EBM and modern dark electronic music, and of course, a place to buy merchandise.

Since Schattenwelt is still pretty new, the crowd wasn’t huge, but, like members of Solar Fake, one of the headliners, said in their Facebook video “the ones that were there really made a great atmosphere”.

Although the festival couldn’t be compared to M’era Luna or Wave Gothic Treffen and similar big events in Europe, the bands really gave their best performance, so it was everything I had hoped for, and more! 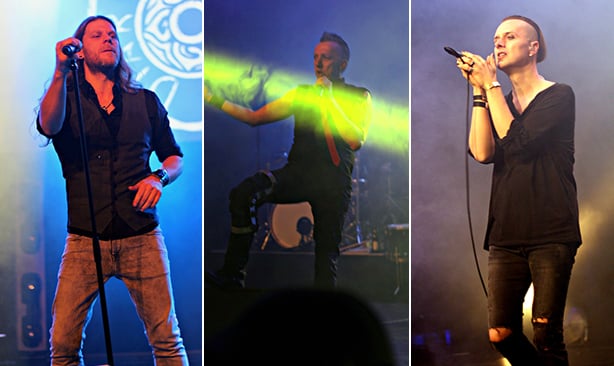 The energy in the audience was amazing, and I think that the musicians could feel it and return the same amount of energy on stage. In my opinion, a smaller crowd makes the experience more intimate and emotional and creates a special bond between the fans and their favorite bands.

All three bands that I’ll be mentioning here are legends of gothic music, each in their own genre, but more about that in a bit. Apart from them, some other acts were: The Beauty of Gemina, Eden Synthetic Corps, Lacrimas Profundere… Most of the bands were German and Austrian. Although Suicide Commando, for example, comes from Belgium, he also sings in German.

Let’s begin with the first band I saw on Friday – Solar Fake.

A legend of his own kind – Sven Friedrich is very well known on the gothic scene, as mastermind behind Dreadful Shadows (rock-/metal-band), Zeraphine (dark rock), and his latest synthpop/futurepop project: Solar Fake. I’ve been a fan of Solar Fake since the very beginning in 2007, but this show left me speechless, maybe because it was the first one I saw at the festival. 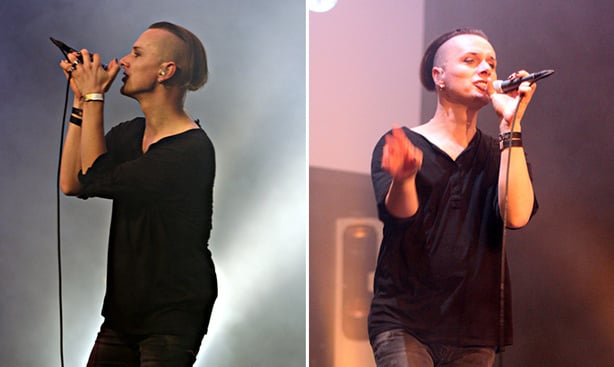 The band played a lot of new stuff, but also hits like I Hate You More Than My Life, More than This, Where Are You, the Killers cover Somebody Told me… Sven ended the show with ballads Stay and The Pages, which nearly brought me to tears, because, well, I wanted them to Stay, with me, always. The energy and emotion this man brings into his music are incredible!

For anyone who’s been around on the goth clubbing scene, the Belgian act needs no introduction. The founder of the project and the pioneer of Electronic Body Music, or EBM as we know it today, is Johan van Roy. I have to admit I’m not a huge EBM fan, but if you go out to goth clubs, you can’t not know at least one Suicide Commando song. Although I wasn’t that familiar with his work, I knew Johan makes literally one hell of a show, and I was not disappointed! 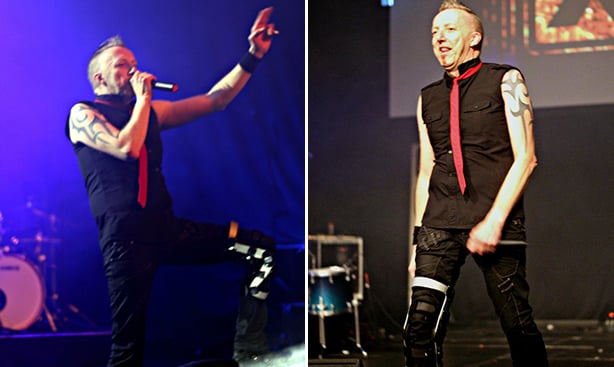 Suicide Commando played mostly good old hits, so I knew the majority of songs, such as Love Breeds Suicide, Dein Herz Meine Gier, Cause of Death: Suicide… Besides, the show was also followed by visual effects on the screen, which you can see in the pictures. Johan ended the performance with perhaps their greatest hit – Hellraiser and when he joined the crowd, it seemed like he had as much fun as we did!

Although I never considered myself a type of person who would have a favorite band or song, I can honestly say Diary of Dreams have been my favorite for almost a decade, and I don’t think it’s gonna change. I consider them one of the only true gothic bands we have left, and definitely one of the best darkwave bands that have stayed around. Also, perhaps one of the most long lasting – with 14 albums and EPs! Adrian Hates, the genius behind the band, has even been called the Ian Curtis of our generation. 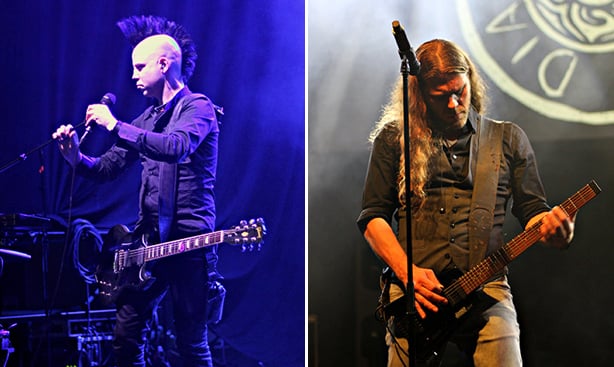 Adrian is a classically trained pianist and guitarist. He writes and produces most of the songs himself. He started out as a guitarist of Garden of Delight, and founded Diary of Dreams in the late ‘80s. Besides being a great lyricist and musician, Adrian owns his own record label, Accession Records, and also has another electro project called .com/kill.

As headliners of Schattenwelt, Diary of Dreams were the last to perform. The beginning of a concert is always a special experience, and I was so excited to see which song they would play first. The band started their set with Sinferno, a powerful song from their latest album Grau im Licht.  Roughly half of their setlist consisted of newer songs. There were also some all-time favorites, such as The Plague, The Wedding, King of Nowhere, Butterfly: Dance, Kindrom… The band surprised the audience by finishing with the very first song they’ve ever written – False Affection, False Creation, and Undividable. 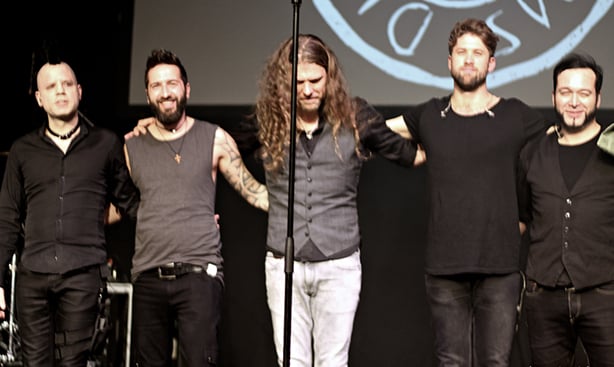 Although Diary of Dreams is mostly famous for slower, gloomy and melancholic songs, the energy on stage was amazingly powerful. You can really tell Adrian has put his heart and soul into every piece, and this is why they have a faithful army of fans for two decades.

All in all, Schattenwelt was an experience I will remember for the rest of my life. I think it has great potential to become one of the most popular gothic events in Europe, like the famous summer festivals in Germany. Besides, since it’s a winter festival, you don’t have to worry about sweating in your corset and PVC boots! I will definitely be going back to Schattenwelt next year, and can’t wait for the next event of this kind! 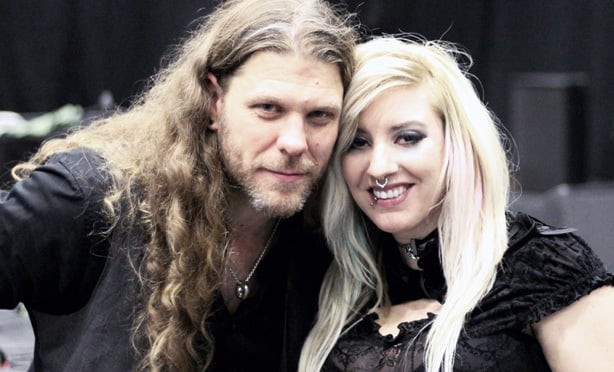