The Story Of Occult Clothing: Wear the Magic

Fascination with occult symbols- pentagrams, the Green Man, alchemy sigils- goes back for generations. It seems that whatever mystic practices have been out of popular court for long enough begin to hold a fascination for us, especially the unusual images. These symbols have been working their way back into the mainstream, and now we can show our cabalistic favorites everyday- welcome to the realm of Occult fashion. 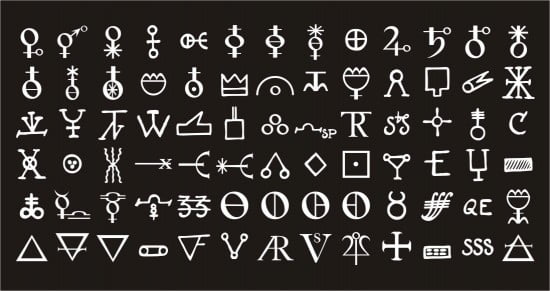 The first segment of the orphic arts is Alchemy. The art of transmutation- turning one thing (like lead) into another more valuable thing (like gold)- was pursues for centuries. These practices, in part, contributed to the foundation of chemistry- the techniques they used in alchemy were sometimes very similar to creating chemical reactions in modern chemistry labs.

While they may never have discovered the way to turn a lump of lead into a Tiffany's keepsake, the alchemists did create something else: alchemical symbols. In order to try and keep track of all their experimentation, alchemists came up with new symbolic ways to represent elements in a shorthand way, using pictographs. These days, some of the symbols are still in use in the scientific fields, but they also show up as a beautiful print on fabrics. 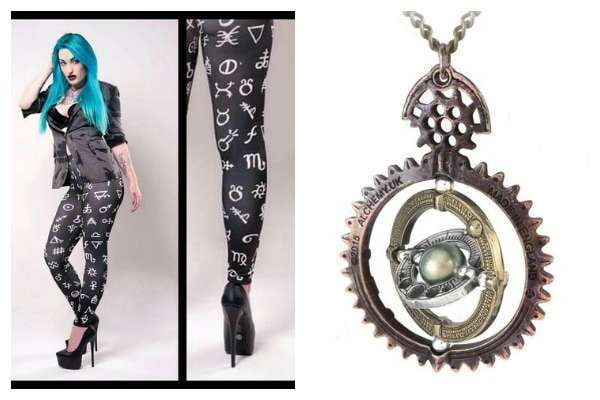 The hard angular lines of alchemy symbols and the familiar shapes mean they look great in high-contrast colors such as stark black and white. You'll often see alchemy leggings and alchemy symbol jewelry, and the pattern is obscure and interesting, keeping its dark edge, but isn't something anyone would really object to. For a practice that may take its name from 'al kimiya' (which can be roughly translated from Arabic as 'magical craft of the black country), its mainstream acceptance seems a sure thing. 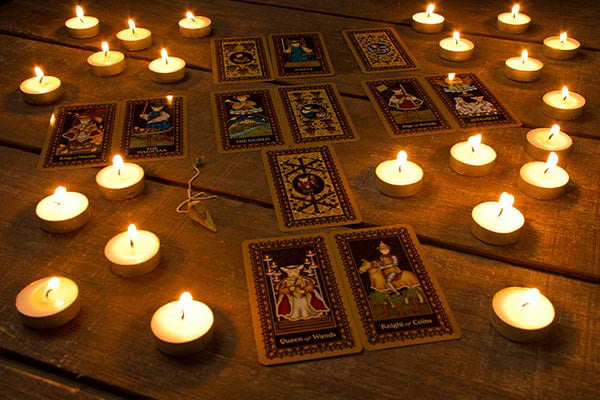 Dating back to at least the 13th century, tarot cards are a divination tool. Depending on which illustrated card- with characters like Death, The Fool, or the Queen of Swords- falls where, and facing what direction, the reader can divine the past, present, and future of the person having the reading done. Tarot cards are often beautifully illustrated, many with a distinctly medieval style aof artwork. These cards have become iconic over the years due in part to the symbolism of each character but perhaps also to the respect many people have for things just on the line between believable and unreal. 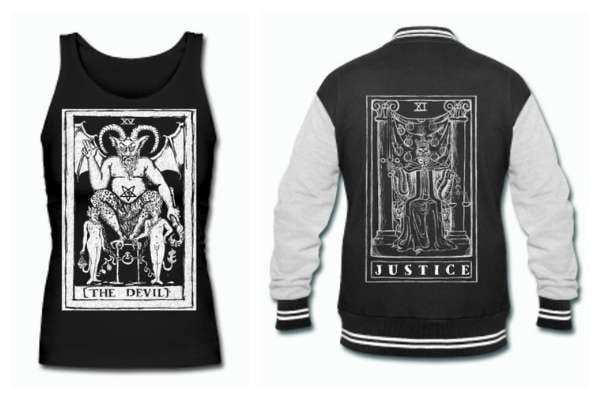 These icons have made a smooth transition into Tarot card clothing, with some of the more symbolic ones- the Death card, signifying change, The Devil, meaning force or violence, and The Hermit, for prudence- being more prevalent both for their meanings and the iconography that accompanies it. Many of the cards show images relevant in everyday life, like The Lovers, and so slip by under most people's notice, Whether you believe in divination or not, a Tarot Card shirt is always an esoteric option. 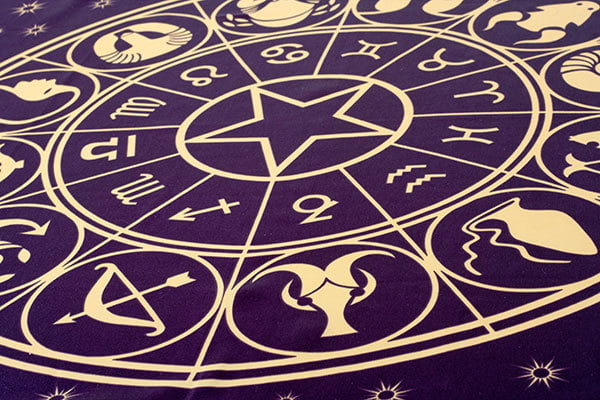 Astrology is another ancient practice that, due to its roots in pre-Christian beliefs, gets shuffled to the fringe. There is evidence man sought meaning by reading the night skies as far back as 25,000 years ago, and that's just based on the written documentation (on cave walls). The theory behind astrology is that, depending on when you were born and the lunar state, it is not only possible to determine personality traits but also to divine a person's future. This used to be a scholarly pursuit, much as Alchemy was. If anyone has ever tried to pick you up using the tired old line "So, what's your sign?" you've been hit on using mysticism. Hey, no one said it's 100% guaranteed. 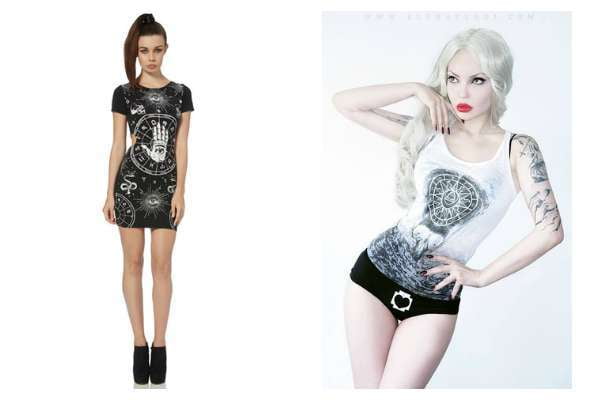 The symbols used to denote a person's sign, woth in Chinese astrology (animals based on your birth year, like Boar and Tiger) and Western astrology (with its roots in Greek astrology and signs like Taurus or Gemini)), are common themes in clothing these days. The astrological symbol necklaces are very popular, as belief in astrology is pretty common. Most weekly papers will have Horoscopes in them, telling each sign what their fortunes will be- and that's all based on broad astrology. Recently, star sign chart shirts have been getting more popular as they are not as commonplace as the images of the signs themselves. 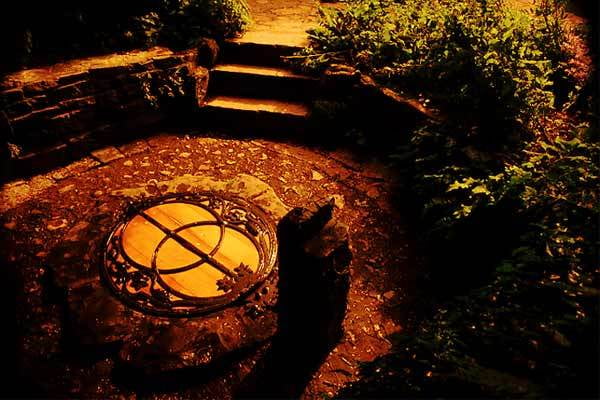 Paganism is a pretty broad topic, covering pretty much every religion that isn't one of the mainstream ones. It is, however, most commonly used these days to describe specifically indigenous beliefs of people of the British Isles, and more specifically the Celts. Their rich mythology and intricate artwork, in addition with the resurgence of offshoot religions like Wicca and Druidism, are bringing Celtic symbols back to the mainstream.

Not a people easily conquered or suppressed, the imagery of the Celts has never really gone out of style, especially with people who claim heritage there. Iconic pieces such as the triskele and Celtic cross have fine lines and twisting pathways that are meant to be traced in ritual to bring about a trance-like state, almost like meditation. These days, it's not quite so religious, but Celtic jewelry is still very popular. Other symbols include the crow, representing Morrigan, and the green Man, a nature god. 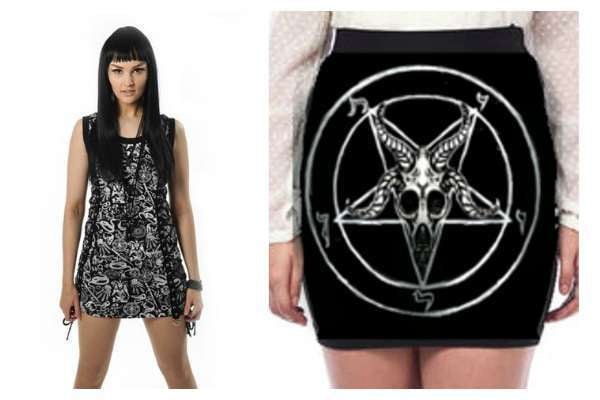 More polarizing images are also prevalent in Pagan clothing. Symbols like the pentagram, a five-pointed star with a circle, were originally for protection but most modern media associated it with witchcraft and evil. Baphomet, the goat-headed god often shown on a throne inside a pentagram, is often used to symbolize the Devil, but its true roots are mysterious. Still, these are designs that some people will take notice of when worn, and some may be upset by it. If all it takes to rile you is a Baphomet shirt or pentagram leggings, then it might be time to take a deep breath and let other people make their own choices. 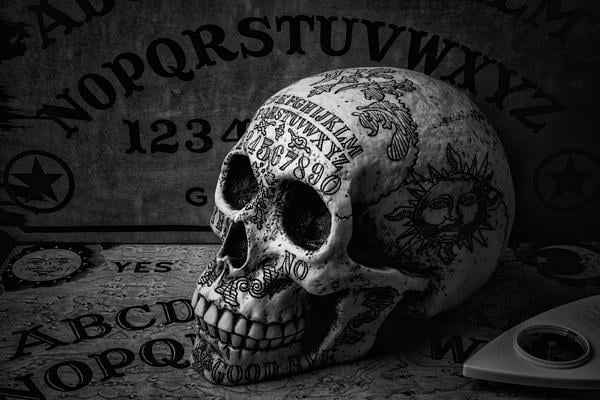 The Ouija board, also known as a spirit board or talking board, is used by mediums to allow the spirits to speak through them. They came into popularity in the Victorian era, when spiritualism was at a high point and people had parties called seances to contact their dead loved ones. A small glass or pointer (called a planchette) is lightly touched- sometimes by just one person, at other times by all members in attendance at the seance- and their combined energies allow ghosts to move the planchette over letters and short answers on a board beneath, spelling out their wishes. 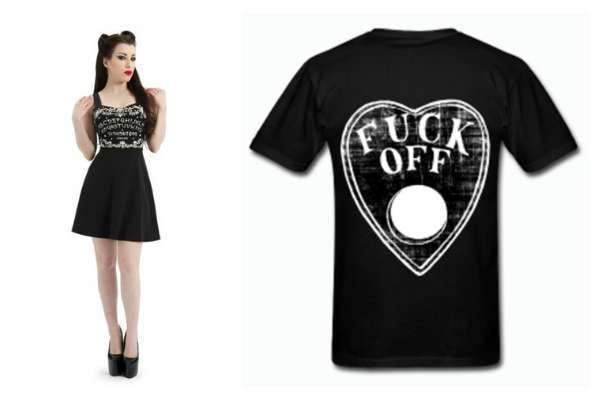 The Ouija board is an object that can make people uneasy, serving as it does as a potential link to the other side, and some feel it can be used by dark energies to cross over. That being said, the Ouija board is a striking visual piece, and is featured prominently in many new pieces. There are Ouija board dresses and skirts, spirit board jewelry, and planchette purses, and there are many different designs possible as there are so many individual types of boards.

As you can see, there are many ways to incorporate the arcane into your attire. The myriad different styles mean there's a lot of variety to be had, so go ahead and delve into the world of mystical fashion. Just make sure you pick styles and backgrounds you yourself are comfortable with- not all occult practices are evil, or even anti-religion. As long as you're comfortable with the way you are, no one else has to be.

The History Of The Ouija Board