4 Fascinating And Forgotten Pin-Up Girls You Should Know! 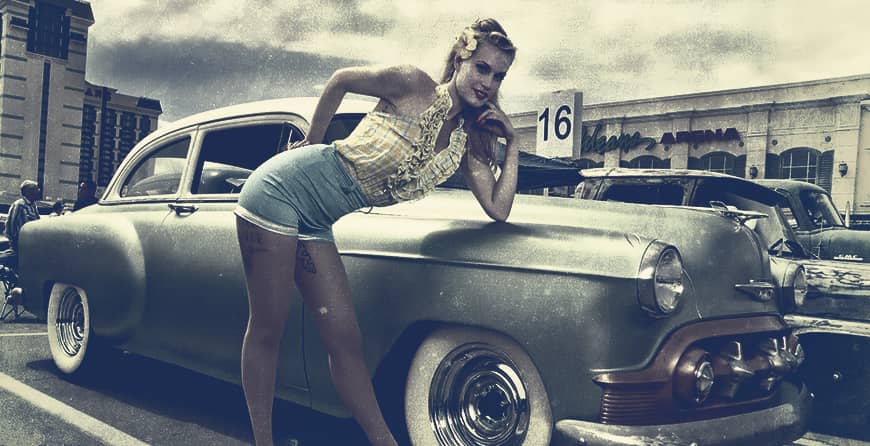 For every Marilyn Monroe and Bettie Page, there are dozens of pin up girls with less fame and notoriety who deserve a timeless place alongside the glamor goddesses of the 1940s and 1950s. The flawless beauty, jaw-dropping curves and classic rockabilly clothing fashion of these fascinating women are often tempered by their stories of hardship, triumph and achievement far removed from the world of modeling.

1. Betty Brosmer -  the lady with the impossible waist

Glamor models often show off their breasts, and Betty Brosmer worked with an incredible bosom. However, what draws your eyes in (and locks them there) is her impossibly small waist, which measures at just 18 inches. 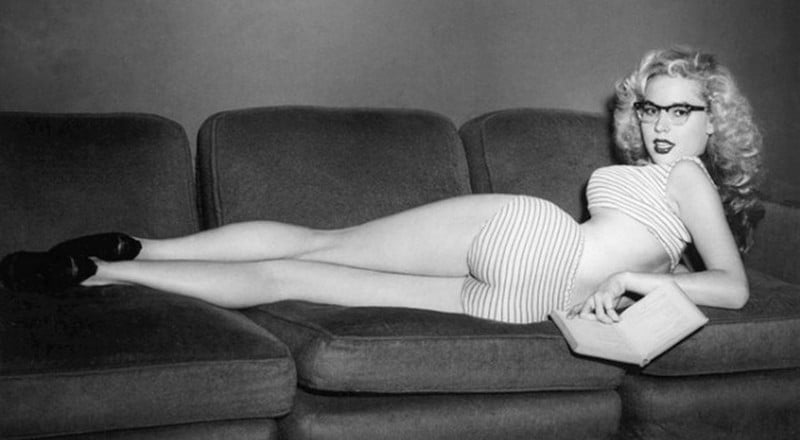 The famous waist, which was likely achieved through waist training with corsets, is noteworthy for looking very attractive, even natural, where other women might just look uncomfortably pinched at the waist. In later years, Brosmer turned from sculpting her own beautiful body to helping millions of women sculpt theirs.

She is the co-founder of Shape magazine, which has been the number-one women's health magazine for decades. Now in her late 70s, Brosmer continues to write two magazine columns that are syndicated worldwide and seen by several million people each month. Even today, her waist is still jaw-dropping. 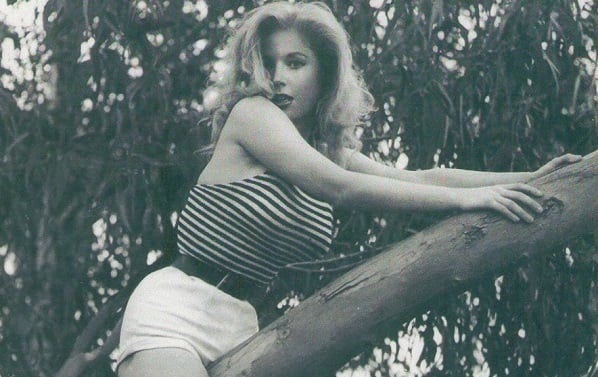 If you don't recognize Vikki Dougan's face, don't fret: she's best known for another asset. The slender beauty achieved fame in the 1950s through a very unlikely ploy – putting her back on full display. Dougan's publicist devised the strategy to jumpstart her acting career, having a dressmaker produce three sexy dresses with low-plunging backs. 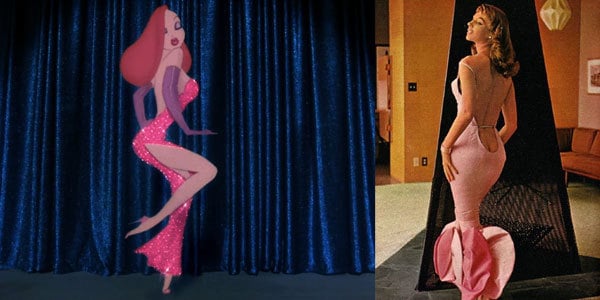 At the time, the style was scandalous. Dougan posed for Playboy and became colloquially known as “The Back”. She was even banned from a preview party because she was drawing attention away from the person throwing the party!

In later years, Dougan's unlikely kind of fame took an even stranger turn: she became the inspiration for the iconic Jessica Rabbit in 1988's Who Framed Roger Rabbit. While the more famous Veronica Lake is usually assumed to be the muse for Jessica, it's the now-forgotten Dougan who rightfully deserves the credit. 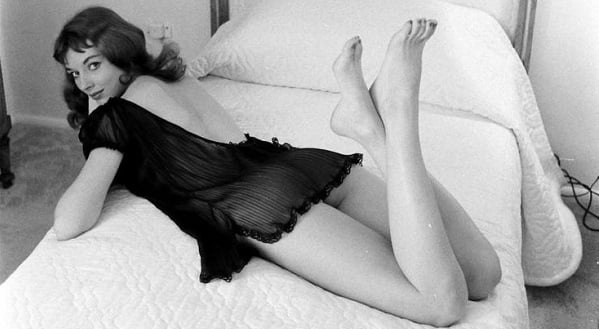 Jessica Rabbit famously said, “I'm not bad. I'm just drawn that way.” Unlikely pin up sensation Hilda would agree. Illustrator Duane Bryer's love of plump women led to the birth of Hilda, an endearing and slightly goofy, beautiful and curvy girl. Hilda lived in the 1950s to 1980s and reached the peak of her fame in the 1960s. During that time, she was one of the best-loved calendar pin up girls, alongside the likes of Marilyn Monroe. From lounging in long underwear and teddies to biking and sailing adventures in bikinis, Hilda embodies a spirit of innocence, playfulness and effortless charm.

Hilda is almost unknown today, though thanks to the Internet she's currently enjoying a comeback. Unfortunately, Duane Bryer's love of curvaceous women probably prevented him from reaching the height of artistic fame he deserved. However, whether drawing Hilda, a full-figured model or his own wandering imagination, we have to assume he was happy depicting just who he wanted to. 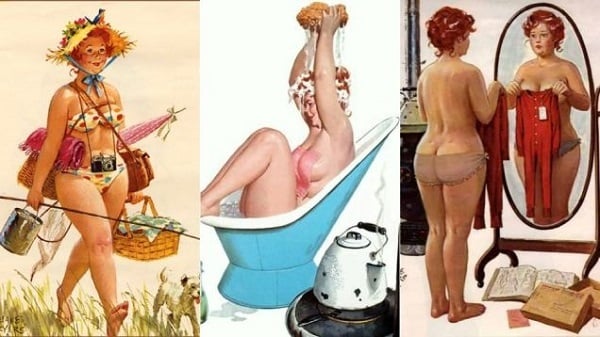 Austrian-born actress and bombshell Hedy Lamarr has a life story so extraordinary, it would make an excellent Hollywood film! At 18, Lamarr starred in the Czech film ‘Ecstasy’ and infamously became the first actress to fake an orgasm onscreen. 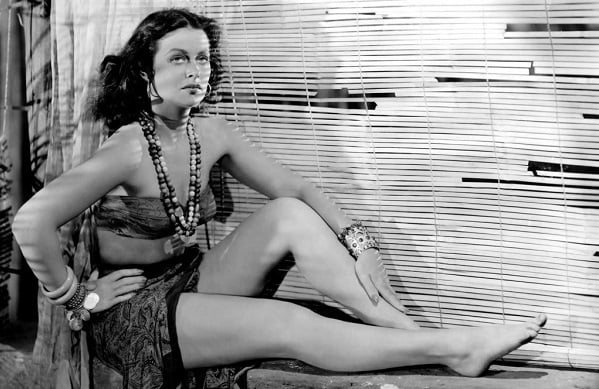 The same year, Lamarr married the third richest man in Austria, Friedrich Mandl, who happened to be a fascist arms manufacturer. Both Hitler and Mussolini made appearances at their lavish parties. Luckily for Lamarr, they never learned she was a full-blooded Jew.

Lamarr later escaped her controlling husband and boarded a ship bound for America she knew was carrying a Hollywood mogul. Over the course of the trip, she secured a $3,000-a-week contract, and she soon achieved minor fame in movie roles that called for exotic beauty or seductiveness. However, Lamarr led a double life. In her spare time, the glamor girl nurtured her scientific mind by devising a system to prevent Nazis from disrupting the missile guidance system on American torpedoes. She was granted a patent in 1942, but the Navy did not make use of her innovation until the Cuban Missile Crisis in 1962. Amazingly, Lamarr's breakthrough, called spread spectrum, now forms the basis of many telecom applications, including GPS and Wi-Fi. Lamarr never profited from the wild success of her invention.

Sexy, voluptuous  and brainy, all that women embody and more are all in these forgotten pin-up women.

Now you know all about some famous but not so famous pin up girls. So next time somebody tries to surprise you with their knowledge on history, tell them a story on these amazing women and gain some approving nods.

Do you know of any other forgotten pin-up girls? Leave your feedback below. 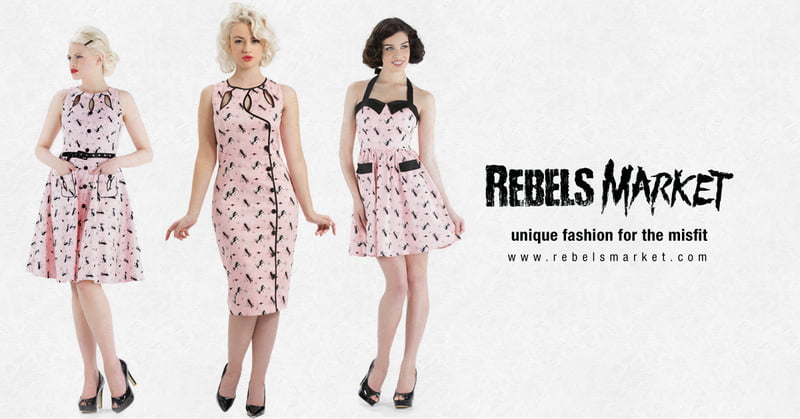 Courtesy of Messy Nessy and Beauty and Tips Magazine