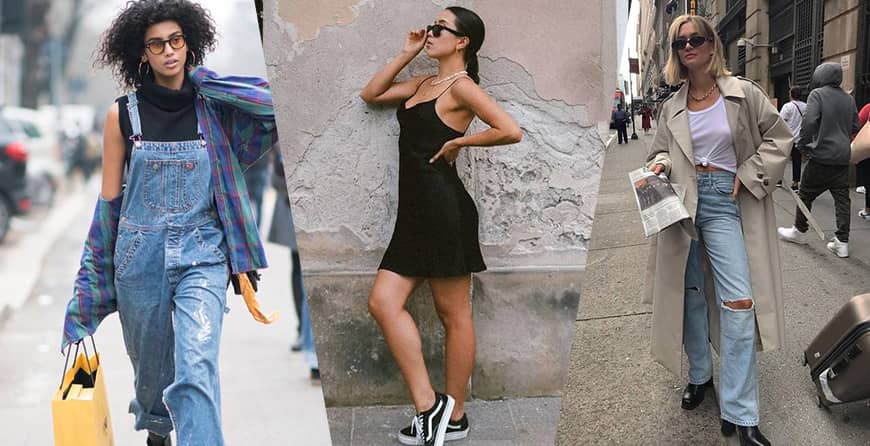 The ’90s were an exciting time in culture. The technology was advancing every day, from computers to AOL to cell phones, giving people new ways to communicate and make a living. For the young women of the ’90s, this was a time where new subcultures, self-identification, and experimentation was all the rage.

From the valley girl to Girl Power, there were plenty of options to define an eye catching look. Let’s dive into the top trends of the decade, and the wardrobe staples that made any 90’s babe the talk of the mall. 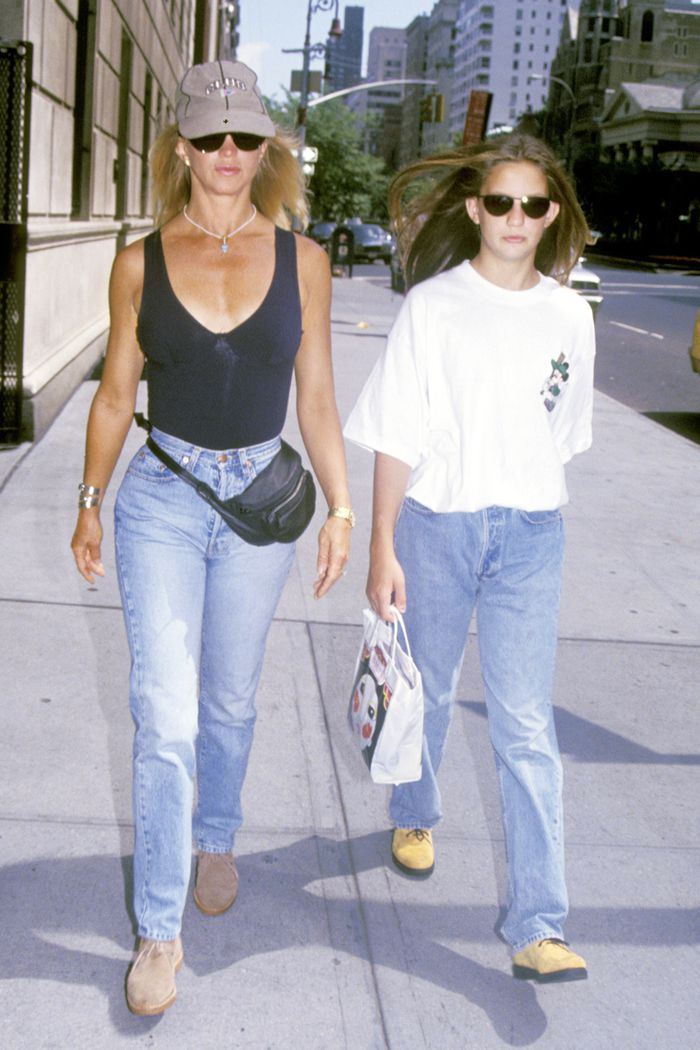 Before diving into the styles of the ’90s it’s important to understand the context women were living in. The 1980s saw the rise of the power suit, the female executive, and glamazons like Cindy Crawford tearing up the runway. But for the average woman, the message of the ’90s was complicated.

Girls growing up in the 90s often learned feminism from their mothers, who were career-focused that previous generations. Many’s first experiences of the workplace were “take your daughter to work day” which was started in 1995 – a classic 90s invention – designed to inspire young women to chase after their career goals. 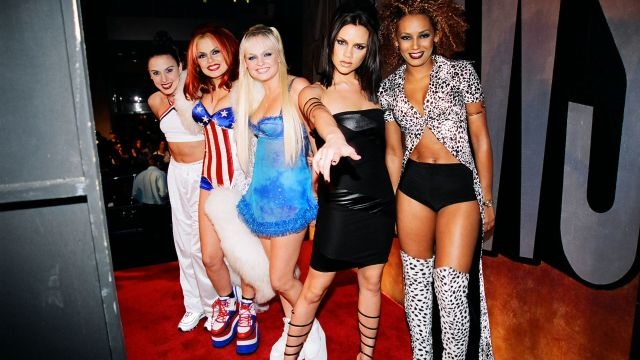 The top celebrities of the time epitomized this conflicting message and doubled down on their ultra-sexy appeal. The Spice Girls brought party clothes - tube tops, metallic shorts, and high boots -  into the mainstream while popularizing the Girl Power phrase. Destiny’s Child’s matching futuristic and barely-there outfits made the trio the epitome of feminine urban fashions. And who can forget Britney Spears, whose midriff-bearing looks rocketed her to fame along with her sexy schoolgirl stylings?

The fashions of these songstresses were pushing the envelope of what was considered fashion vs what should be kept in the bedroom. Looks from the Spice Girls and Britney, soon were seen in every mall in America. Tight, synthetic materials were all the rage, and bright coordinated looks were popular for women who weren't afraid to show some skin as part of this new, super-sexy cultural moment.

Grunge to the Max 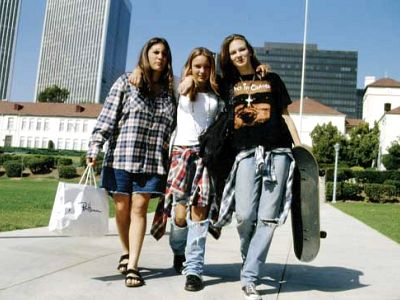 Grunge music - popularized by Nirvana - was a heavy influence in the 90s. It was a welcome relief from the super slick 80s and at its core was authentic.

The unwashed aesthetic even influenced Hollywood style. Plaid skirts and shirts were popular after the Smells like Teen Spirit video, and made appearances in movies like Empire Records.

Girls mixed mens clothes with barely there tops and dresses to blend the worlds of girly and grunge. The DIY and oversized clothing look was the biggest trend of the 90s and permeated all areas of fashion. 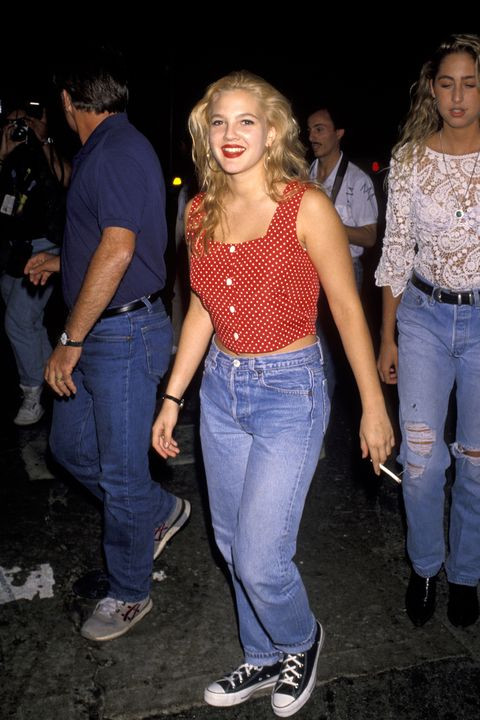 While the music was all done up and sexy, movie stars were embracing a more natural, DIY look. Drew Barrymore was a star whose rocker looks, combined with a laid back attitude, seemed to epitomize the 90’s girl next door - quirky, casual thrift shop finds combined with some rock and roll accents.

Midriff-baring tops were part of the style as well, but shrunken down second hard t-s was more the style instead of metallics. If it looked like it came from a bargain bin, and barely fit, it was in! Her look was almost tom-boyish, with short dyed hair and tattoos rounding out her signature style. 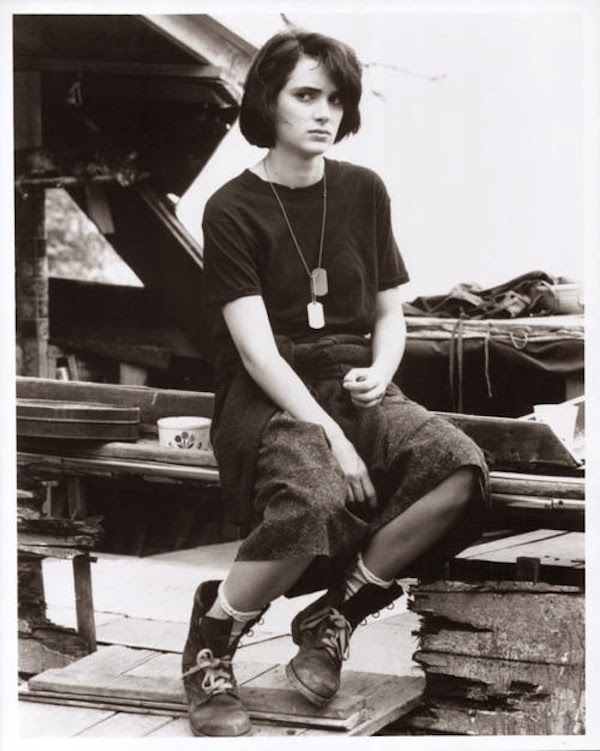 The 90s girl look was also epitomized by Winona Rider, whose roles in Beetlejuice, Edward Scissorhands, and the Heathers made her the darling of quirky alternative fashionistas everywhere.

Stars like Barrymore and Rider cultivated a youthful, undone appearance inspired by model Kate Moss, which was a welcome alternative to the “Spice Up Your Life” look of the popstars, which relied on glitz and glam for their brand of Girl Power.

Essentials for any 90s babe 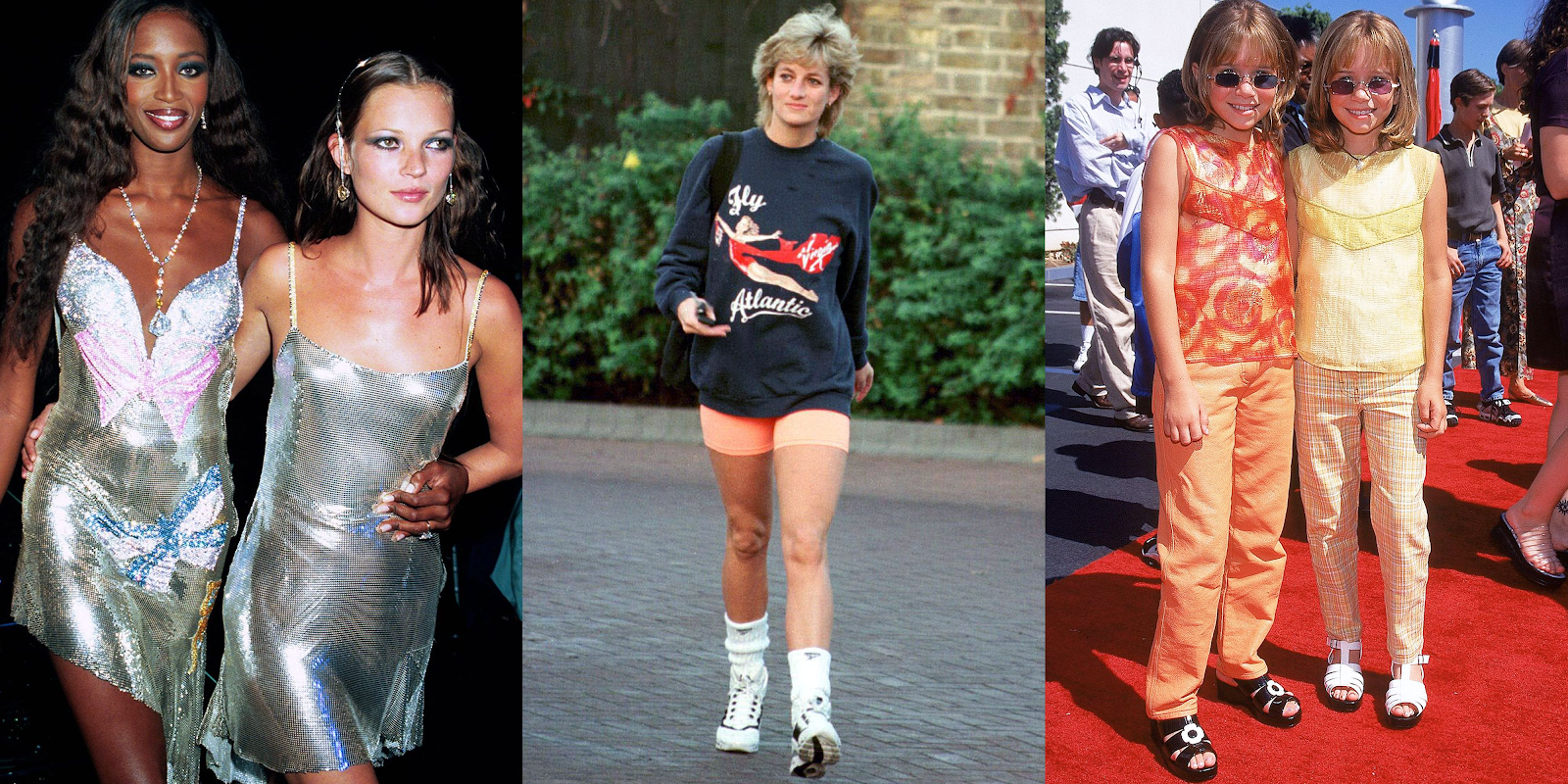 Whether it’s the ultra-sexy popstar look or the grungy girl next store is what you're going for, there are some 90’s pieces that are essential for any retro look. Let’s take a look at the trendy items that made the ’90s pop! 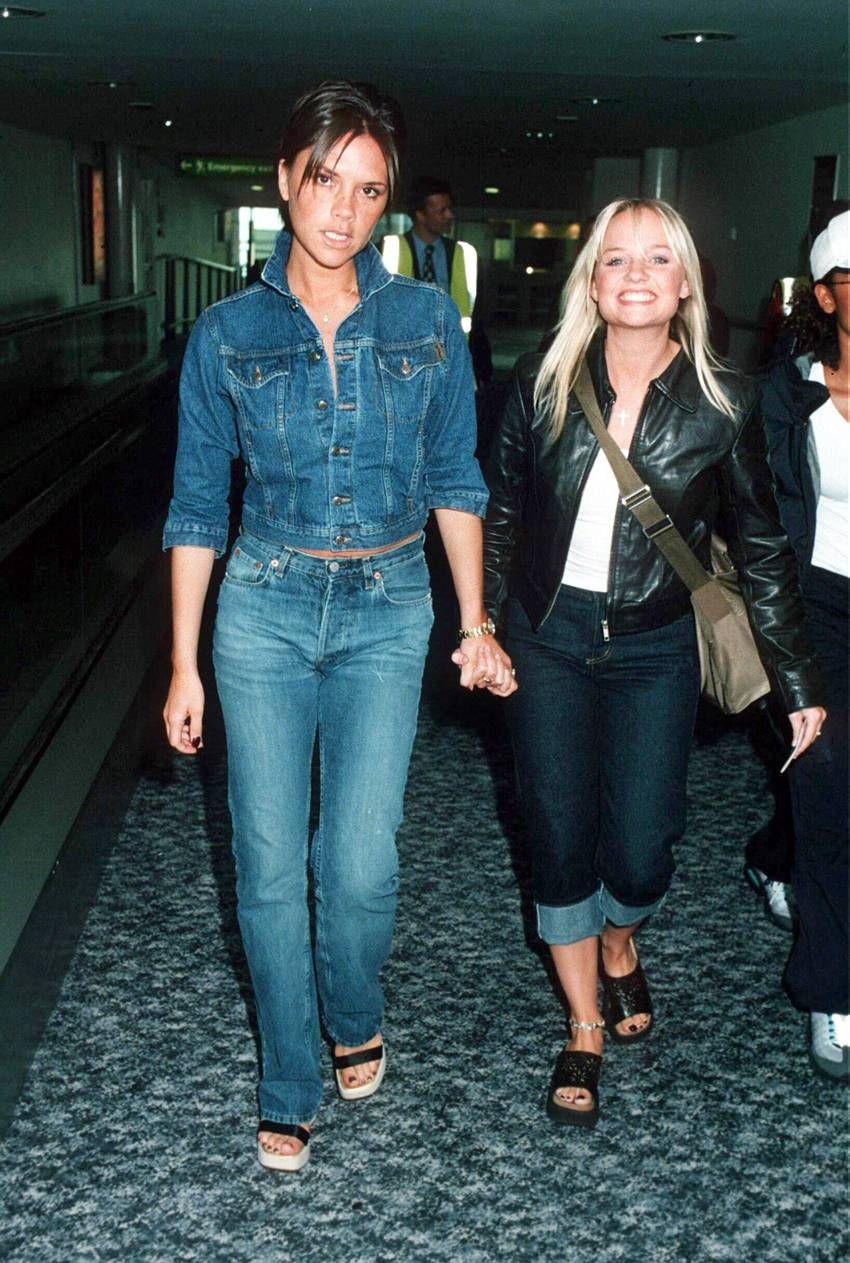 While jeans have been a staple in American fashion since the 1960s, the 1990s saw a massive rise in all types of denim apparel as everyday wear for women of all ages.

Denim in the 1980s was a usually lighter stone wash, and this trend continued in the 1990s. But darker and even black denim also increased in popularity.

The styles and cuts of denim in the 1990s followed two trends - the high waist, straight leg “mom” jean” was all the rage in the early ’90s. But in the latter part of the decade - partly due to the sexy outfits of pop stars like Britney Spears and Christina Agulera, super low waist, wide cut jeans made an appearance.

But denim in the 1990s went far beyond just jeans. Denim jackets were seen in almost every teen movie, and denim shirts were also popular. Overalls were also a trend, with wide legs and suspender all made of denim.  Basically, the theme of the ’90s was if you can make it, why not make it out of denim? 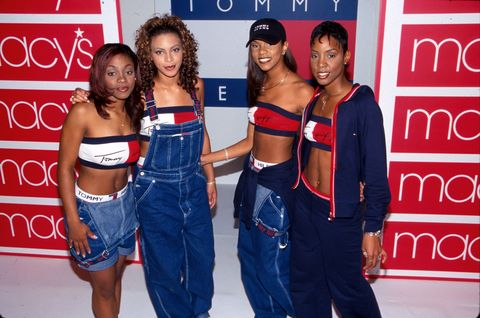 At the same time denim bursting from workwear to everyday clothes, exercise apparel was coming out of the gyms and into the streets. While the ’80s were known for bright, spandex outfits, the ’90s expanded on this sporty trend.

Leotards and tracksuits could be seen out at parties as often as at the gym, and wearing just a sports bra became a statement. Bike shorts - long, spandex shorts going just about the knee - were popular to wear under large t-shirts or men’s overshirts - usually vintage of course!

Brands like Fila, Tommy, and Calvin Klein all got onboard the fitness crazy, creating minimal and sweat-worthy bike shorts and bra outfits that 90’s women could wear anytime. Pair it with an oversized denim jacket, and voila! 90’s chic. 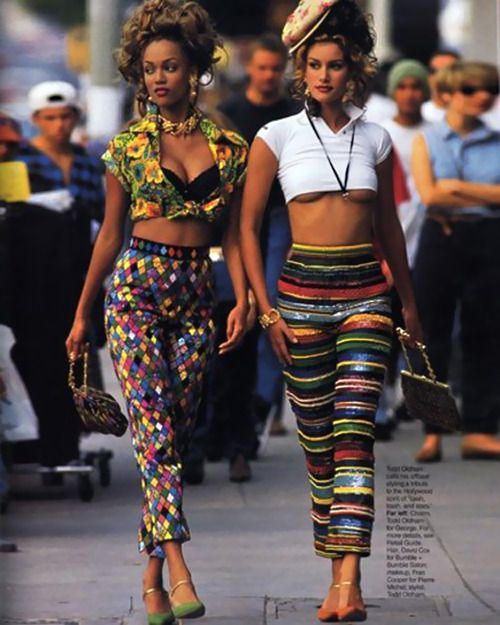 While the ’80s put neon on the map, the ’90s saw an explosion of prints and patterns everywhere. Florals, neon and geometric prints were all mixed together - often in one outfit!

The general rule was, the brighter the better. Brands like Coogi made bold rainbow sweaters prints their trademark, while established brands like Tommy added in new color-blocking elements to their existing lines.
But it didn't need to be a designer to be on-trend. Vintage floral prints and African patterns from men's shirts in the 80s were given new life in the 90s as women played with pairing these pops of color with sporty touches, like denim skirts and lace dresses. Mixing and matching was key to the trend, and with enough color, you couldn’t go wrong!

Tattered and Ripped up 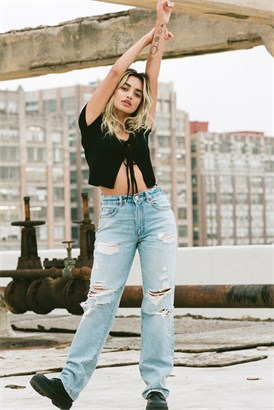 Grunge music was a huge influence as we have mentioned, and this extended to a general trend of tattered, worn, and vintage clothes. While at one time ripped jeans were seen as something to mend or throw out, in the ’90s ripped was in.

Torn up shorts, jeans and jackets were seen as stylish and as a sign of a rebellious attitude - so young people loved it! Holes in t-shirts were also popular, as was cutting off larger shirts to create a midriff-baring look.

If a 90’s fashionista wanted to, she could create a whole look from a discount pile at the thrift shop - and if it was a little ripped, even better!

While many women took to wearing vintage men's shirts as a look, they were also experimenting with another side of “girl power”. Girly, pink and frilly frocks were popular as well, often incorporating vintage styles or holes to add an edge.

The babydoll look was made popular by rockers like Courtney Love, who ransacked the children section of Goodwill for loose-fitting, short, and often floral dresses to wear. The dresses often had a high waist, then a flare, and ended up being very short or even shrunken looking. The idea was to evoke a child-like vibe while having a subversive edge. Often a t-shirt was layered with the dress, keeping with the grunge trend.

This look is still popular today due to its ease and comfort, although with a floral print this look becomes even more 90s. Today the look is often called a “skater dress” since it remained popular with punk rock subcultures. 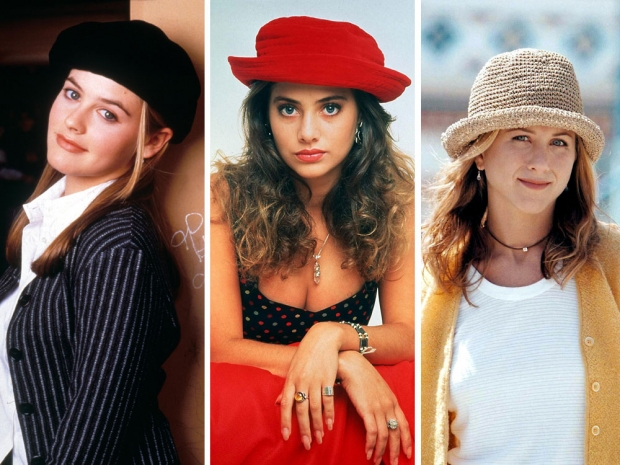 The 90s saw lots of funky headwear, much of it inspired by the burgeoning hip hop scene. Baseball hats weren’t just for sports fans anymore - both men and women were rocking team caps simply for fashion.

Floppy brim hats, floral print hats, and even denim caps were all the rage, offering fashionista’s a chance to continue pattern mixing their outfits. Whatever the occasion, a 90s girl could be sure to find a hat to fit! 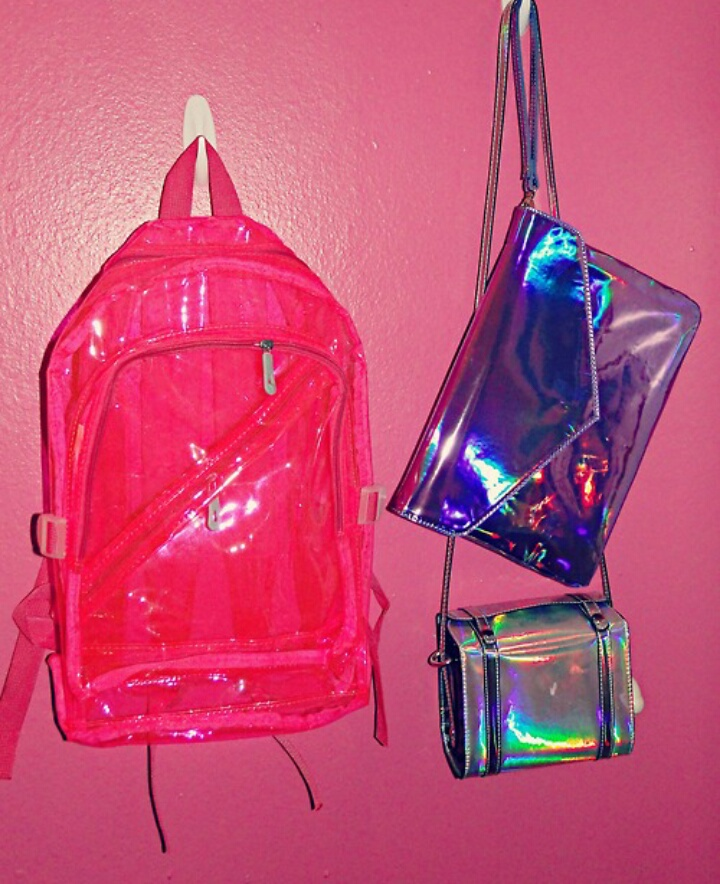 On the opposite side of the grunge trend was a fascination with new synthetic materials, such as vinyl and plastic. Plastic purses, often clear, came into fashion  - party due to the plastic trend, and partly due to new concerns and security regulations about gun control.

But plastic was everywhere - from earrings to clear plastic high heels, the brighter and bolder the colors, the better! These modern material accessories were popular with women of all ages, despite their juvenile aesthetic. Even plastic furniture grew in popularity - including the very popular blow-up chair. It might be squeaky, but the look was fun and very 90s.

Girl Power to the Max 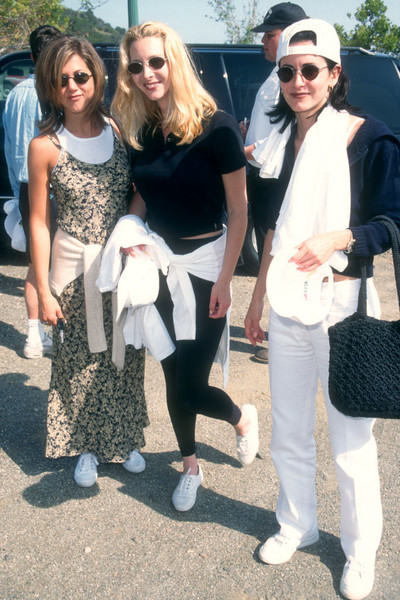 The 90s were a time of mixed messages for women, and for fashion. Different trends seemed to be at odds with each other - pop star bubblegum vs DIY grunge, altered menswear vs girly babydoll, torn denim vs plastic. The fun part about 90s fashion is found in mixing these looks into one fun outfit!

There were no rules in the 90s, and it can be remembered as a decade where lots of different styles and aesthetics started to blend into a funky modern style. Each woman could choose her outfit based on her mood or budget, with vintage clothing just as popular as designer labels. The ’90s were a great equalizer, a funky mix of styles, and most of all a decade where personal expression and experimentation were celebrated!

Atomic! Badass Punk Women in the 70s and 80s
Fashion from the 50s: Retro Styles You Can Wear Today
90s Dresses that are Back in Style