The Cuteness Revolution: How Kawaii Fashion Is Fast-Becoming A Global Movement

In English, the loose translation of Kawaii is "cute."

So, in essence, Kawaii fashion is cute fashion - but there is so much more to the movement than looking adorable alone.

If you'd like to get to grips with the origins of this iconic Japanese movement, check out our guide to the history of Kawaii.

Up to speed? Great, we’ll continue.

Kawaii Style: A Feast for the Eyes 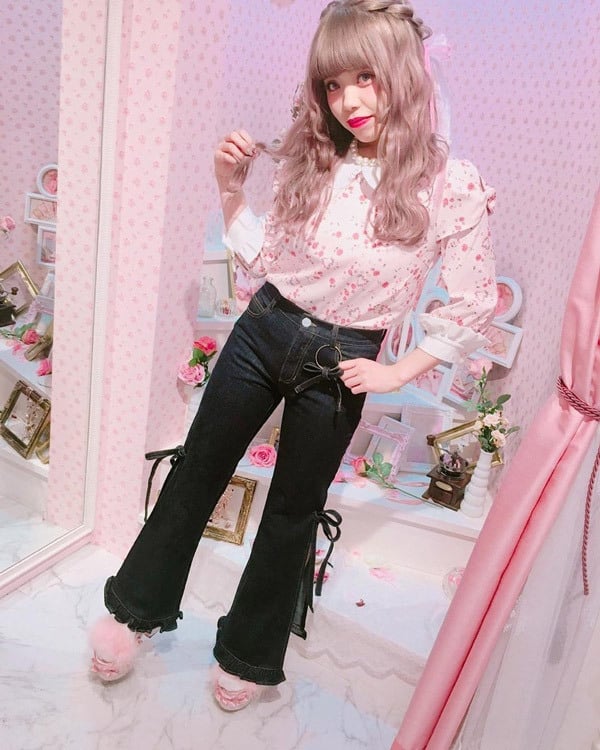 There's no denying it: Kawaii is a feast for the eyes, swaddling the beholder in a kaleidoscopic world of cuteness and colour - but due to its mass popularity that has expanded in the Western world, Kawaii is fast-becoming a global movement.

As mentioned, the term Kawaii has strong ties to the term cuteness but its true origins are a little more meaningful than mere cuteness. The implications of this subculture stretch far beyond cartoon-cute accessories and lolita-style pastel dresses!

"Kawaii actually means a delicate cuteness, like a weak, small type of thing. It’s also an embodiment of all that’s happy and positive.”

From this statement, the words happiness and positive resonate loud and proud, which is the reason why the Kawaii fashion has spread overseas and is now celebrated the world over.

Now, while Japan, in a contemporary sense, is celebrated for its sushi and sake, as well as its futuristic offerings and rich cultural heritage, in recent years, its cuddly, cute and animated aesthetic has crept into the bones of the public consciousness. Think novelty sunglasses and teddybear backpacks. Think emojis and Hello Kitty.

In fact, according to recent search engine data, the likes of anime, Hello Kitty and of course, Kawaii are among the most highly search terms in relation to Japan - the worldview of Japan has shifted, and it looks soft.

The Kawaii movement is taking over the world and its picking up some serious momentum. Haven't noticed?

Well, consider this for a moment.

Whatever your opinions are on these Westernised attempts at Kawaii, the point is: the movement is celebrated on a global scale, and with great popularity comes great power.

Ironically subversive, while Kawaii sports a cute, almost vulnerable aesthetic, it's staunchly preserved and protected by its core fanatics, which in an unlikely way has made it somewhat of an effective political tool.

A few years ago, subversive memes based on notable political subjects began to emerge across the web, sporting slogans like 'pups against the patriarchy' on innocent, animated backdrops, turning heads and getting attention. 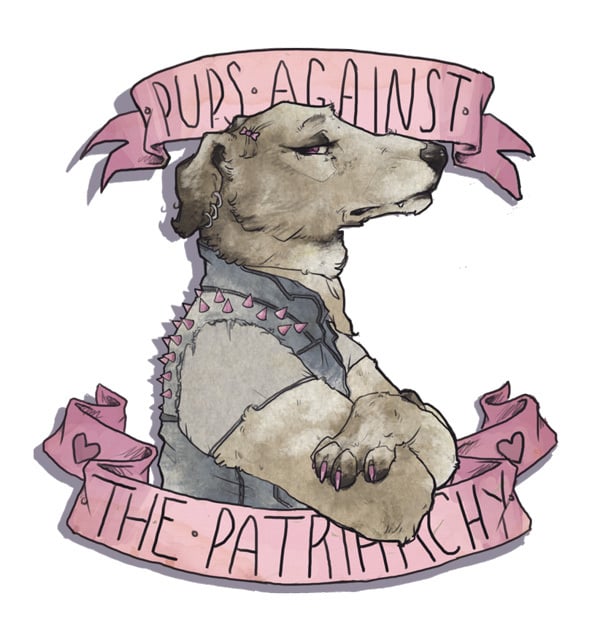 But from all of the socially conscious, outwardly political Kawaii-based offerings, perhaps the most striking has to be the dedicated 'Kawaii Trump', Tumblr Page.

Speaking out against President Trump and his many, shall we say ‘ways’, this amusing yet powerful web space has used Kawaii’s cute aesthetic to troll the man in the wig in many creative yet visually dreamy ways, gaining a great deal of traction of social media.

Courtesy of Kawaii Trump, here are a few visuals that really stand out: 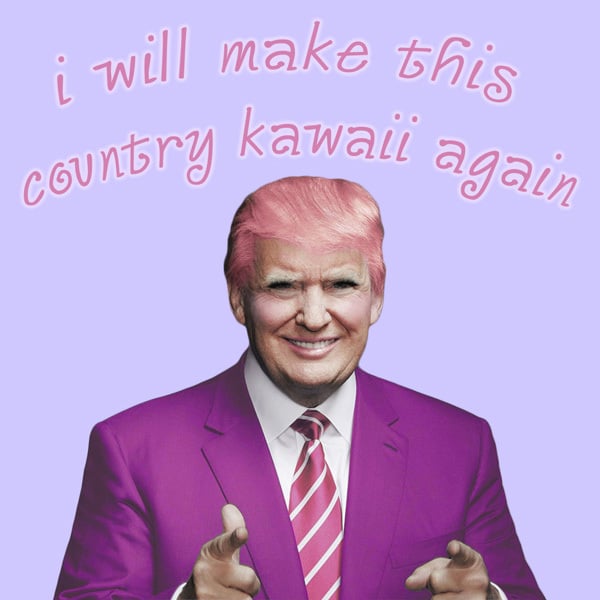 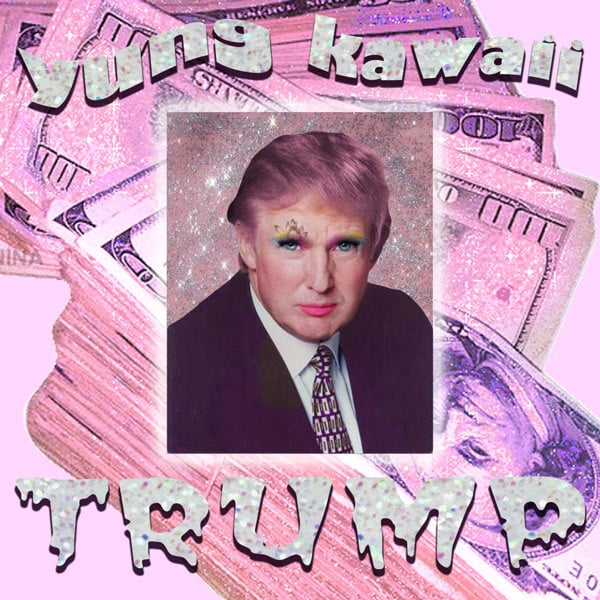 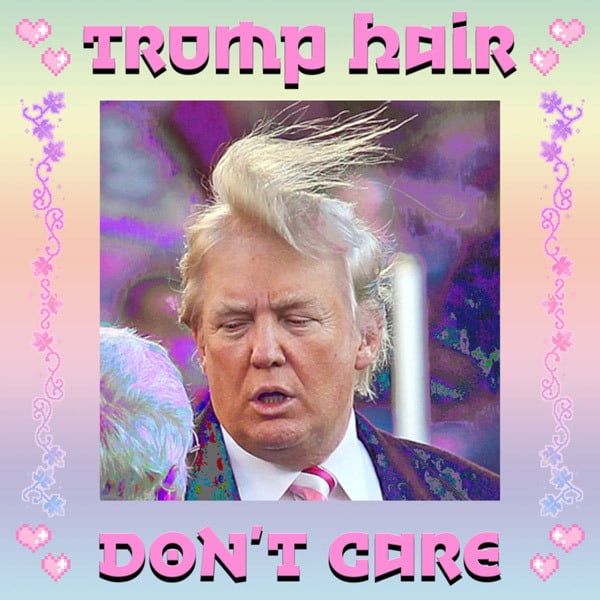 An elaborate comb over if ever I saw one.

Now, while Kawaii can't solve all of the world's problems alone, far from it, the movement has served to highlight issues, bring together communities and tackle evil forces in a disarmingly cheery way - which in some ways, is more powerful than brute force and aggression could ever be.

As Kawaii culture pumps through the veins of societies across the globe, perhaps what's most incredible is the fact that it's unusual due to its unique power to null negativity and evil. And if it brings communities together, helps people through hard times and puts a wide-eyed, pink frosted finger up to ill will, surely that’s a good thing?

To get you fully wrapped up in the swaddle of Kawaii, here are some quotes that sum up the spirit of this world-dominating movement:

“Every day may not be sweet. But there is something sweet in every day.” - Queenie Law

“I have a whole little world in my brain.” - Anon

"Everything looks cute when it's small." - Cynthia Rowley

"If you feel like you don't fit in in this world, it's because you are here to create a new one." - Anon member of the Kawaii community.

Kawaii is getting bigger every day, and there's nothing you can do to stop it. This cute Japanese movement has all of the key ingredients of a great subculture: a dedicated following, a striking aesthetic, a strong message, a genuine desire for change and an inclusive and an ever-expanding number of mediums to express oneself (the Kawaii way).

Although nobody would have thought it possible some years back, in its own way, Kawaii could end up being as poignant as the likes of mod, punk and goth.

The question is: will you join the Kawaii revolution?

If the answer is yes, why not check out full range quirky Japanese-inspired kawaii clothing. Happy shopping and we wish you the very best of luck on your Kawaii journey!

Fashion Trends From Other Decades That Are Back In Style