Top 7 Aesthetics That You Should Know About 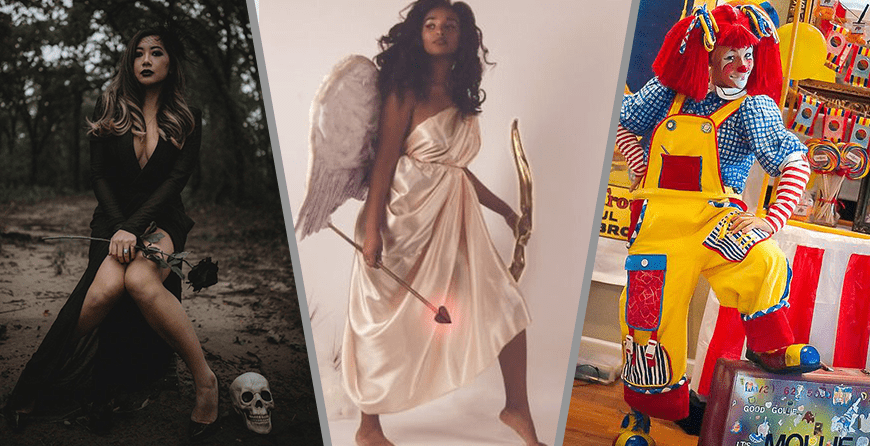 With the internet fueling fashion, aesthetics are now bigger than ever. After all, there is no better way to express yourself to the world than the clothes you wear. Right? Platforms such as Tumblr, Instagram, and TikTok have given rise to a new era of aesthetic style.

However, before you let your fashion fly, you first have to figure out your personal style. With so many great looks floating around out there, deciding on what look fits you best isn’t always easy.

But the good news is that you don’t really have to choose. You can take pieces from each aesthetic and create your very own style. The fact that so many of today’s aesthetic styles have a myriad of similarities makes this process easier than you may expect.

So, without further ado, let’s dive in and take a look at a few of the most popular aesthetics taking the world by storm these days.

What Do We Mean by Aesthetics?

Before we go any further, let’s stop for a minute and discuss what we mean when we refer to aesthetics.

The term aesthetics refers to an overall style. It describes a complete look, including clothing, accessories, and even home furnishings.

Aesthetics fit into a particular niche. And today’s most popular aesthetics tend to be fun, and often, they are even a little quirky.

There can also be a good deal of variation with a particular aesthetic. For instance, Witchcore can range from the classic Halloween “wicked witch” feel to a more earthy “green witch” look.

From the cozy vibes of Cottagecore to the wild colors of Clowncore, everyone can find a way to express themselves with these styles.

These aesthetic styles first began to pick up steam thanks to Tumblr. But things change as time marches on, and these days, they are all the rage on TikTok.

The aesthetics that are taking over the internet right now are big on fantasy and whimsy. As previously mentioned, many of them share certain aspects with the others on our list. For example, Cottagecore, Goblincore, and Fairycore all have a special love for mushrooms.

However, there are also both subtle and distinct differences between each aesthetic style. Each of these styles has its own unique feel, and it’s no wonder they are enjoying viral recognition these days.

We’ll take a close look at each of these aesthetics and how you can incorporate elements of these styles into your own wardrobe.

Imagine a cottage in the woods, surrounded by wildflowers. You sip on a hot cup of chamomile tea while the wind gently blows through your billowy sundress. That, my friend, is the epitome of Cottagecore. 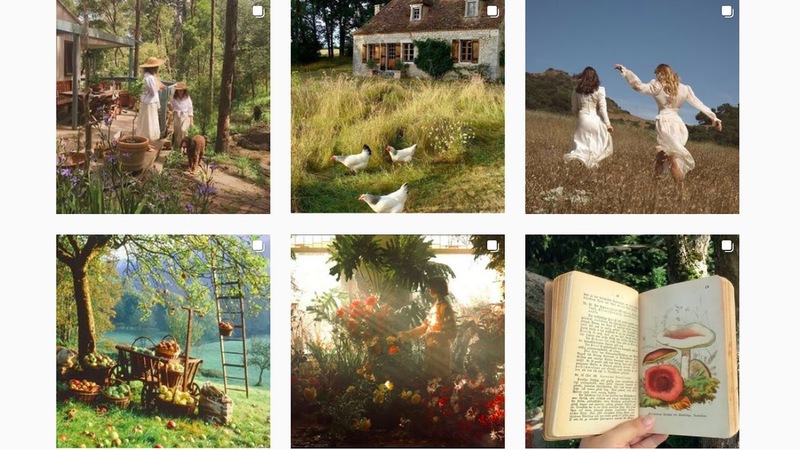 This aesthetic style romanticizes rural farm life in just about every way imaginable. Cottagecore focuses on things such as wildflowers, baking, animals, mushrooms, and, of course, cottages. Tea sets are also common with this style.

The most prominent colors you will find in cottagecore are soft, neutral, earthy tones such as white, baby blue, cream, light yellow, olive green, dusty rose pink, and light brown. Floral prints and gingham are some of the patterns you might find with this style. 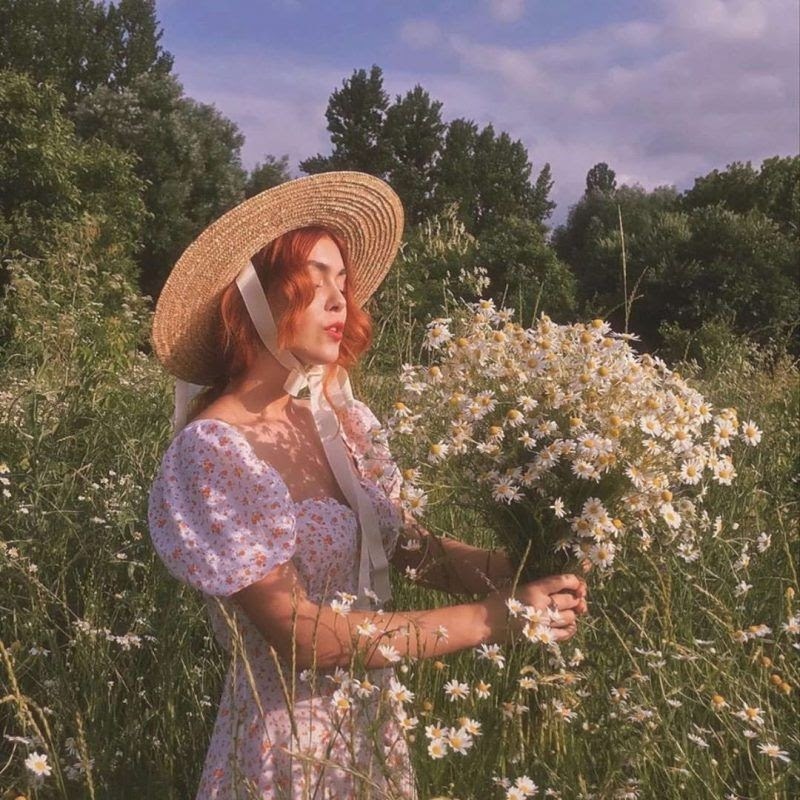 Image via The Daily Posts

When it comes to clothing, long, flowing dresses and skirts are popular in Cottagecore. Sundresses, wrap skirts, lacy shirts, and similar clothing items amount to the bulk of this style’s fashion choices. Accessories include vintage jewelry and large sun hats.

Cottagecore fashion includes lots of lace, ruffles, and embroidery. Items that have been knitted or crocheted by hand are also popular.

You can find examples of the Cottagecore aesthetic in movies such as The Secret Garden, Little Women, The Sound of Music, and Pride and Prejudice.

In many ways, Goblincore is similar to Cottagecore. Both aesthetics focus much of their style around things found in nature. However, whereas Cottagecore focuses on beautiful things, Goblincore figures the uglier, the better. 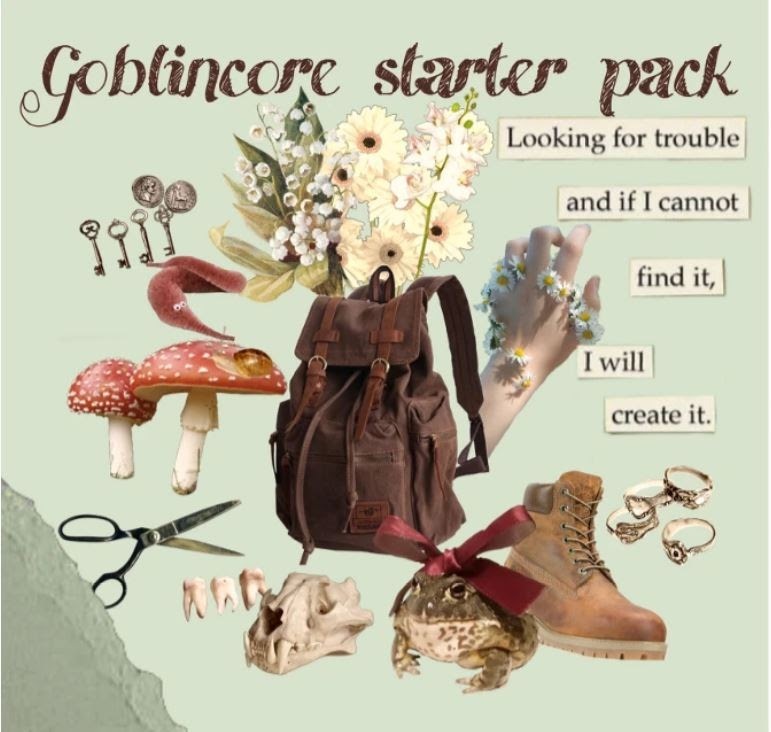 Both aesthetics have a special love for mushrooms and animals. But Cottagecore is mesmerized by cute animals like fawns and rabbits, while Goblincore celebrates animals such as snails and frogs.

This aesthetic opts for well-worn clothing. Think thrift stores and hand-me-downs. This makes sense since goblins love playing in the dirt, so their clothes tend to take a beating anyway. 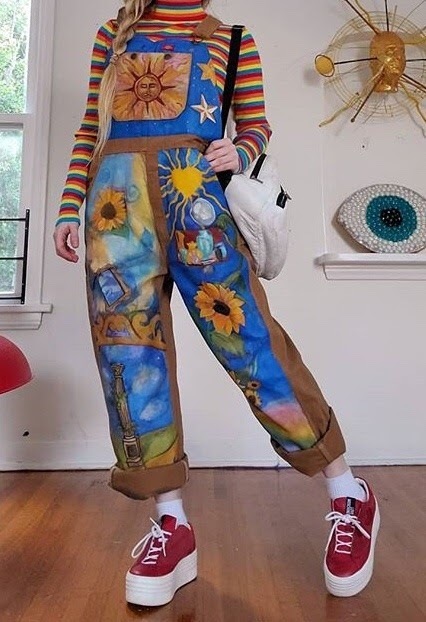 This style features lots of oversized, bulky sweaters, earthy tones, and colorful shirts. Loose jeans and baggy overalls are also central to Goblincore. However, one of the hallmarks of this aesthetic is brightly colored, mismatched socks.

One thing to remember about goblins, they like shiny things. As a result, they collect things like coins, rings, pebbles, shells, and anything else they might “find” on their adventures, which they lovingly refer to as “shinies.”

This aesthetic is self-explanatory. It’s all about the clowns. Clowncore is full of bright colors and can include circus themes and rainbows. 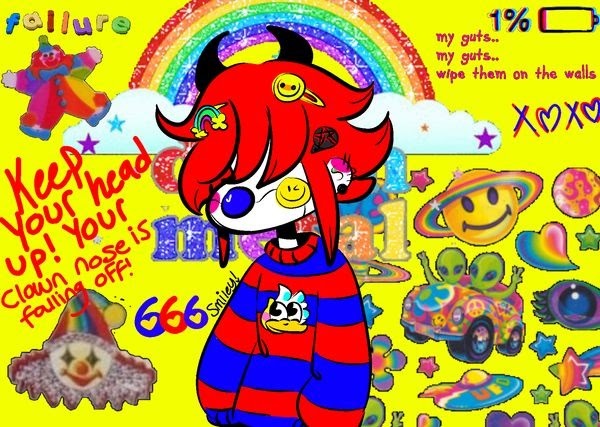 The clowns in this aesthetic can also be more of the mime or jester variety. However, the typical happy clown is the most common expression of Clowncore. Juggalos are essentially a darker cousin.

Red, blue, and yellow are the primary colors you will see with this style. However, any bright colors can work for this look. Clowncore outfits may include colorful leggings, patterned overalls, suspenders, rainbow sweaters or bright shirts, and oversized shoes. 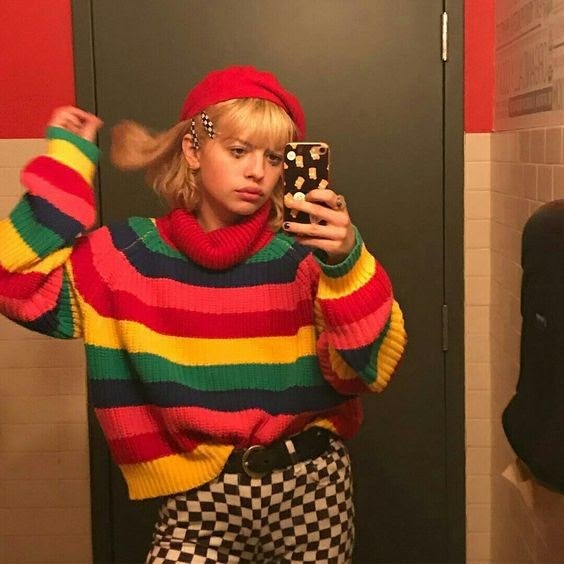 Accessories are usually bright, primary colors, just like the clothing. And jewelry is often plastic. Clowncore is also known for heavy makeup. This aesthetic is about one thing: FUN.

Fairycore is another aesthetic that shares many features with Cottagecore. They both include lots of pastel colors and a love of nature. However, Fairycore tends to have a bit more magic and sparkle -- and, of course, wings. 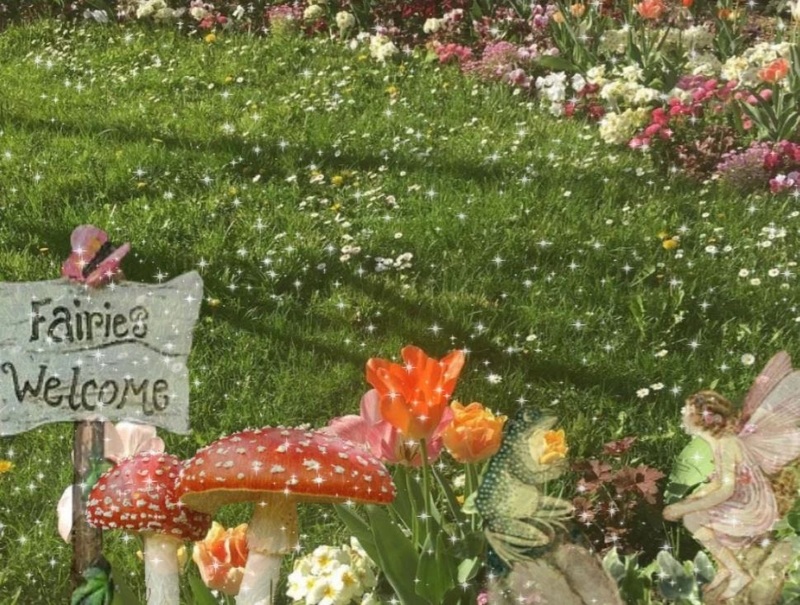 Much like Cottagecore and Goblincore, Fairycore also has lots of mushrooms. Flowers are part of this aesthetic as well. This style is all about the feel of nature in the spring. You will find cute animals such as bunnies and lots of butterflies.

The primary colors associated with Fairycore are pastels such as yellow, pink, and blue. White and cream are also popular with this style. Anything that sparkles works with this aesthetic. Jewelry tends to focus on gemstones and can be gold or silver. 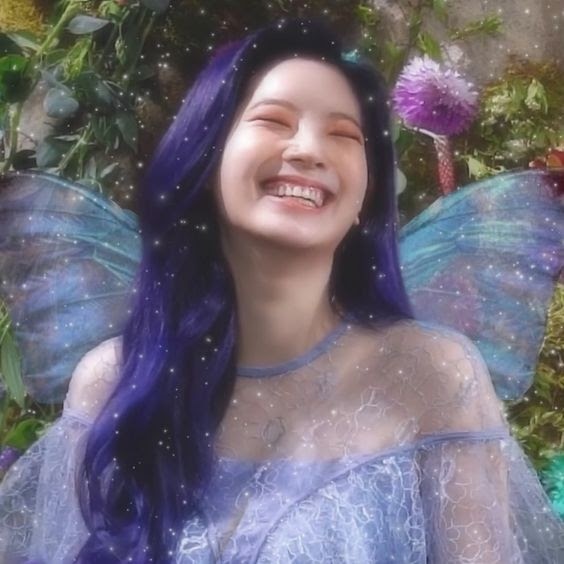 The leading fashion choices are flowing dresses or whimsical skirts with billowy blouses. There is an overlap between Cottagecore and Fairycore when it comes to clothing. Both of them like sheer and lacy fabrics. Open-toed shoes or strappy sandals are popular in this style.

The key difference is that Fairycore tends to be a bit more colorful and has much more sparkle. Also, you won’t find any fairy wings in Cottagecore.

Witchcore is yet another aesthetic that is similar to Cottagecore in many ways. But as the name suggests, Witchcore’s central theme is all things witchy.

One unique thing about this aesthetic is that there are multiple ways to approach this style. The first is the darker of the two. 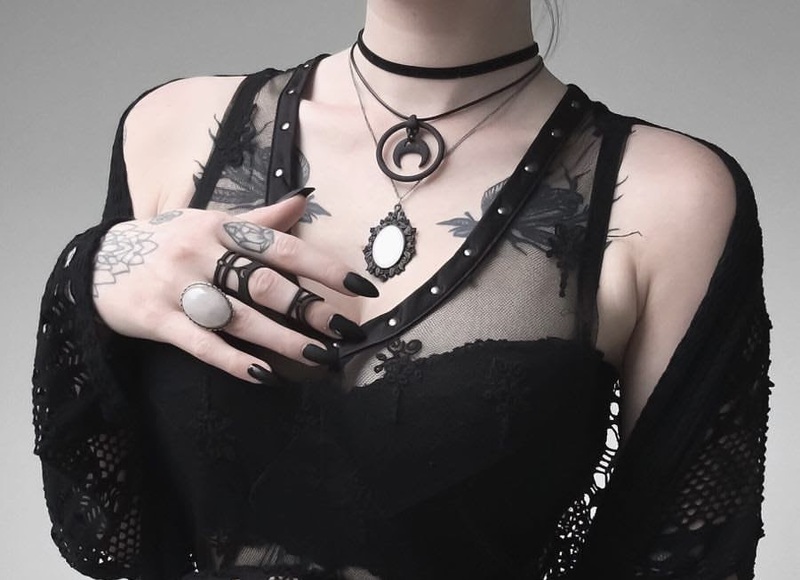 Think of all the classic witch stereotypes from Halloween when you were a kid, and you’ll get the picture. For this take on Witchcore, you find lots of black dresses, long skirts, and witchy shirts.

The second approach to Witchcore has a more earthy feel. You’ll find dark browns, creams, and greens, and more of a focus on nature. The overall style is similar to Cottagecore with a witchy twist. You’ll still find flowy skirts and lacy tops. 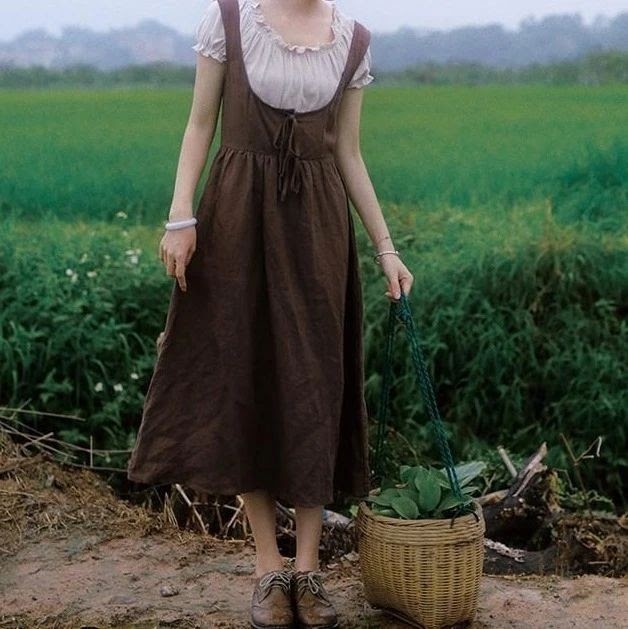 The first approach to Witchcore has more of a Goth feel than the second, which shares more with Cottagecore. The fabrics for Witchcore of either variety can include lots of lace and are similar to those found in Cottagecore and Fairycore, but they are a darker color.

Other themes and symbols commonly found in Witchcore are tarot cards, crystal balls, frogs, cauldrons, moss, owls, cats, and anything else that has a connection to witchcraft.

Once again, Angelcore shares many similarities with both Cottagecore and Fairycore. However, the thing that sets Angelcore apart is (you guessed it) the focus on angels. 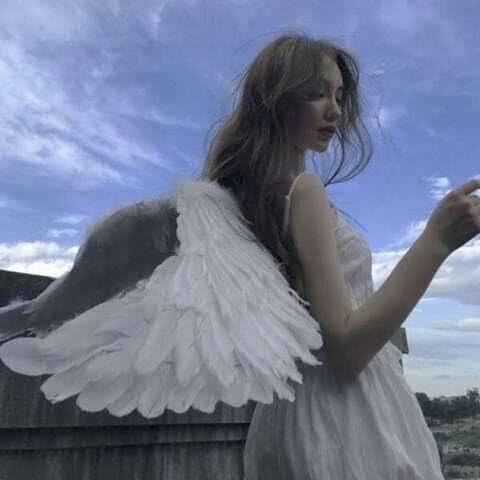 Not surprisingly, the color scheme for Angelcore is pretty much the exact opposite of what you’d find in Witchcore. The primary color is white, but other light colors can be included, such as pastel blue, yellow, and pink. You’ll also see a lot of gold accents.

This look is based on what Christian imagery portrays angels to look like. In addition to angels and cherubs, clouds and anything to do with the sky can be part of this aesthetic. And no angel would be complete without a halo, so you often see those as well. 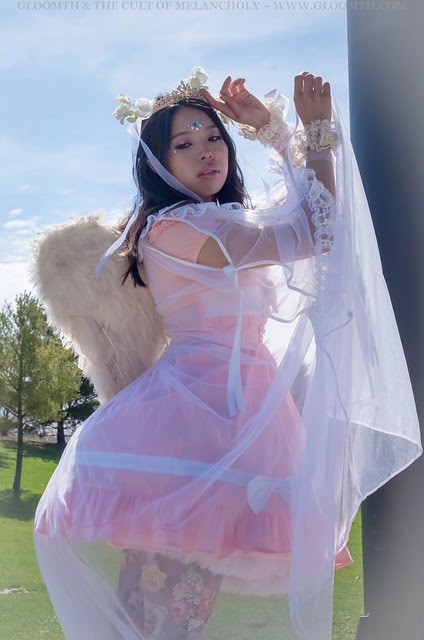 Image via Gloomth and the Cult of Melancholy

To create an Angelcore look, you can use white dresses or a light-colored skirt with a pale shirt that has flowing sleeves. Like Cottagecore and Fairycore, you will find lots of lace in Angelcore.

As in Fairycore, you are likely to see wings in Angelcore. However, fairy wings tend to be sheer, whereas angel wings are usually feathered.

The last of the aesthetics we will cover is Dark Academia. The central theme of this style is history. While each person puts their own spin on this look, it always has a refined, classic feel. 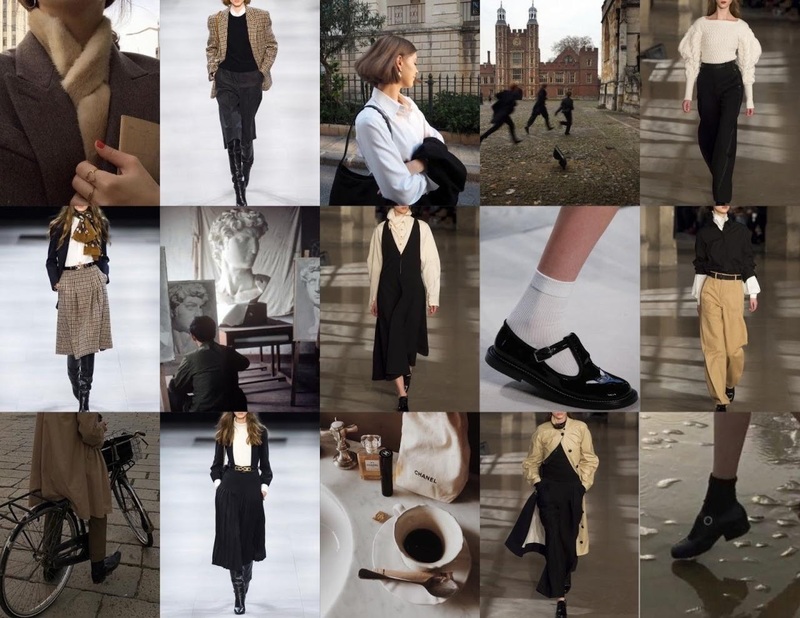 Dark Academia loves old books. This aesthetic is all about history and mystery. There is also a focus on ancient buildings and even darkness itself.

If you’re trying to picture this aesthetic, think Hogwarts or Oxford. The clothing of this style has a Dead Poet’s Society vibe. This look features various dark colors, including black, dark brown, maroon, or navy blue. 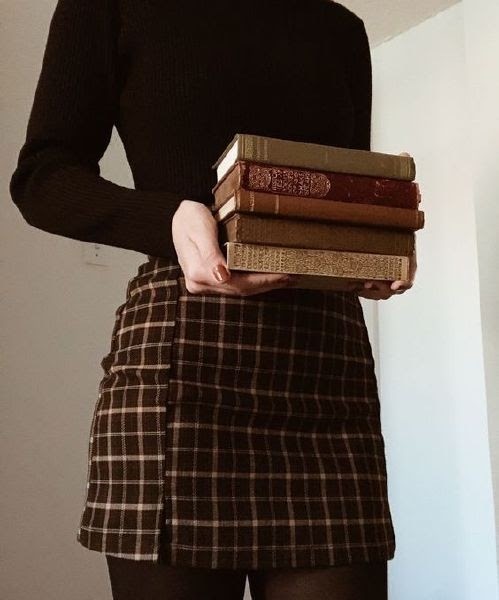 You’ll find stylish trousers and trendy skirts, along with a dressy blouse and maybe a plaid blazer or classy jacket. Turtleneck shirts are common. As for footwear, knee-high leather boots and Mary Jane’s are both popular.

Think of the kind of thing you’d find your favorite college Philosophy professor wearing. Dark Academia is all about class and refinement.

Develop Your Own Aesthetic

Now that you know the seven most popular aesthetic styles, you’re ready to find your signature look. You can go all-in on one or pick and choose from several aesthetics to create your own style.

Dive into each of them and see which one feels the most comfortable for you. Do you love the sparkle of Fairycore? Maybe the thrifty style of Goblincore is right up your alley. Or perhaps the refined feel of Dark Academia fits you best.

When it comes to who you are and choosing your style, there are no right or wrong answers. Use your clothes to express yourself to the world without saying a word. And most of all, have fun!

Also, make sure you keep in mind that while these are the most popular aesthetics around these days, they are far from the only ones. There are dozens upon dozens of aesthetics that you are free to draw inspiration from.