Glam rock fashion doesn’t just revolve around dark and masculine type of clothing like what we are used to seeing. Unlike goth and punk styles, metal and rock has a wider variety of styles to offer, evolving each year. It combines glam metal, punk rock and gothic rock and its fashion influences can still be seen on streets worn by both young and older generations who share the same love for the rock and metal bands of the 80’s to early 90’s.

Let’s unravel this colorful and glittery era to the darker, punk and edgy era of glam rock, understanding and rediscovering it from the music to the fashion. Be prepared to be rocked! 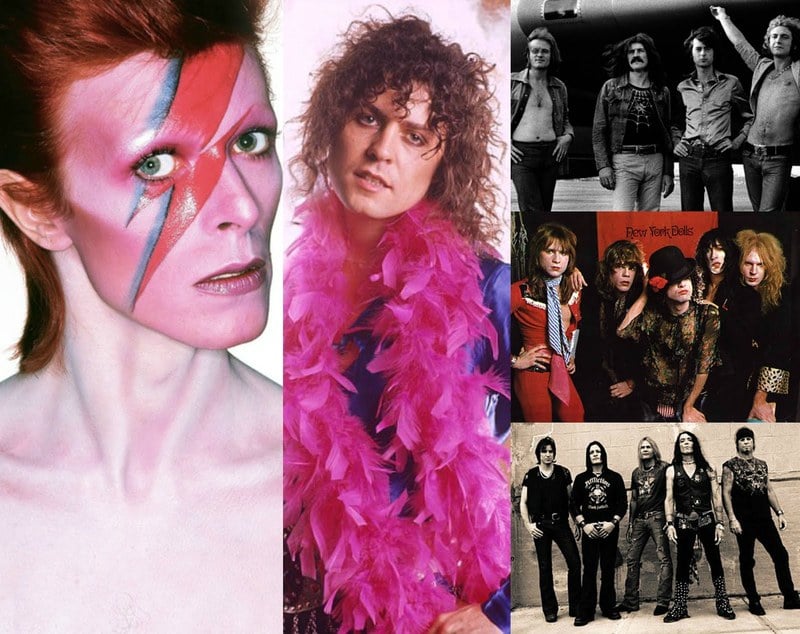 Glam rock fashion rose to fame in the UK  from the influence of ‘60’s progenitors like Led Zeppelin and early 80’s T.Rex and the English rock band Slade.

You can find a taste of Classic Glam Rock style here. 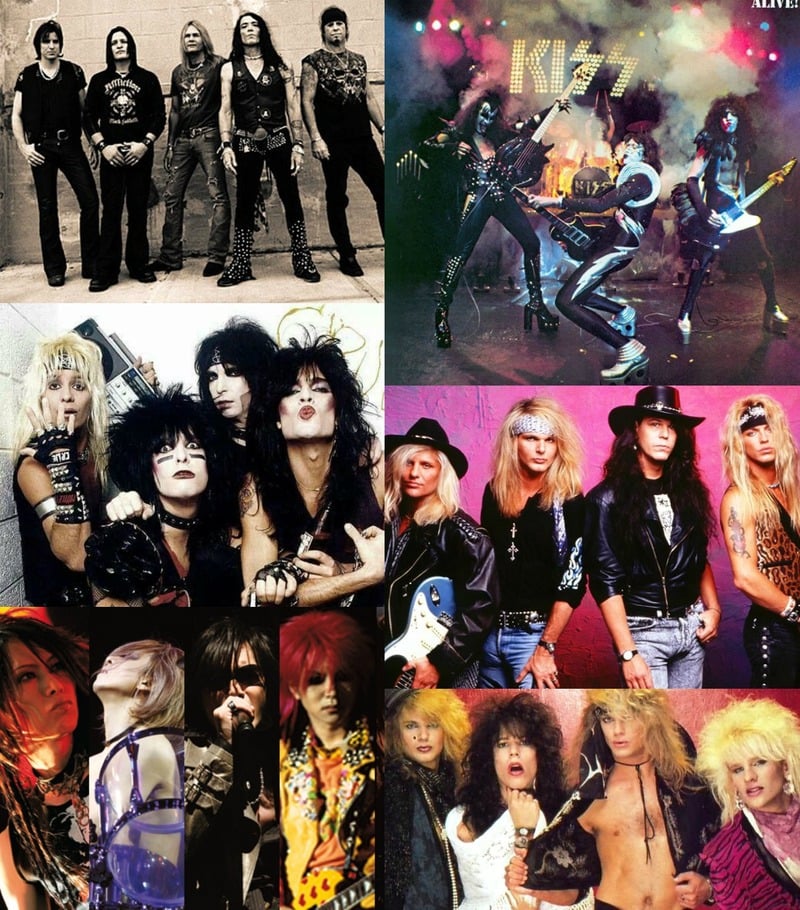 Rock musicians of the 80’s paid homage to the bands of the 70’s and took a different approach to the glam rock fashion. Big tousled hair for males, gender bender outfits, outrageous thick makeup, signature guitar riffs, spandex, studs, spikes, distressed denims, metallics, armors, platform shoes, and they also incorporated animal prints to their attire. There was a crossover and fusion of different genres from glam metal, which is another sub-genre of glam rock, going to the direction of heavy metal and hair metal.

Though some of the colorful fashion trends from the classic glam era started to disappear, greater fashion trends of mixing and matching of clothes emerged. Most masculine musicians like Bowie were still able to pull off the concept of androgyny perfectly. These musicians sold double and even triple platinum sales with their albums and greatly influenced the late 80’s to early 90’s trend.

The New Era of Glam Rock 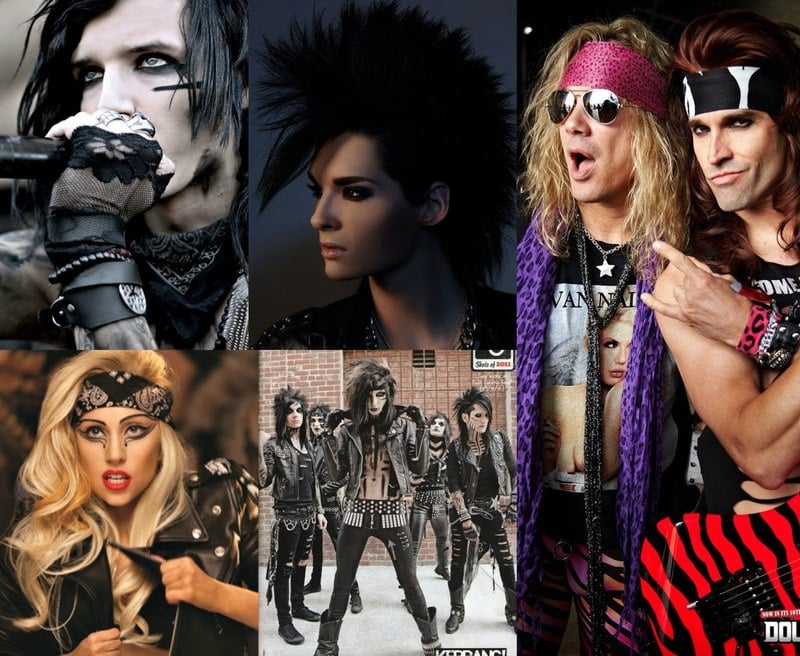 Music and fashion has evolved through the years with new artists emerging and developing their own identity and signature styles while still paying homage and taking inspiration from the early musicians and trendsetters.

Lady Gaga once said that her fashion inspiration is none other than David Bowie. She added a twist to her style with some disco inspired looks, and a typical club kid style. Black Veil Brides, an American rock group, added punk and edge to their style by having long hair and wearing black makeup, body paint and tight studded clothing.

Recent bands inspired by KISS, Motley Crue and the glam metal acts of the ‘80s are the German rock band, Tokio Hotel. With his long hair, feminine features and good taste in clothing mostly inspired by Bowie, Bill Kaulitz of Tokyo Hotel has rocked the glam rock look with his smokey eyes and painted nails.

Steel Panther are an American heavy metal band from Los Angeles California and are known for their dirty yet humorous songs and crazy stage personas. Up to this date, the quartet still carry the look, lifestyle and glam of 1980’s bands. 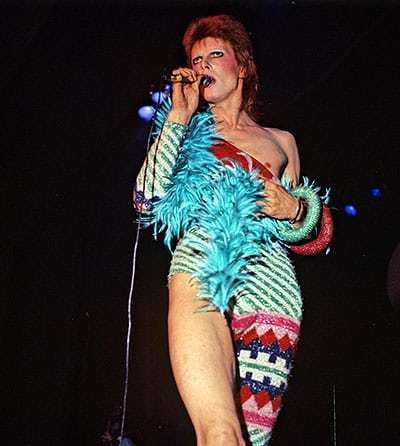 Filled with eccentricity, gender bending and out-of-the-norm clothing, this genre and subculture has to be seen to be appreciated. Colorful and flashy, glam rock is all about the show.

See the signature styles of Glam rock and incorporate these cool rock, pop and metal fashion looks in your wardrobe; 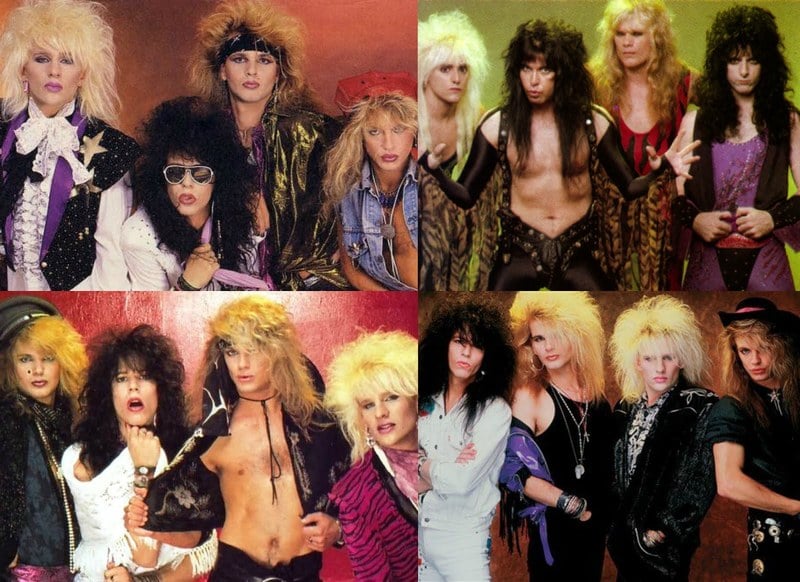 Post Glam Era contains subculture like Hair Metal, the bigger the hair, the better. Beware though, because those thick, lustrous hairs need a tremendous amount of hair spray. Hair teasing and perms with bandanas are common metal men accessories.

Too impatient to grow out your hair? There are various hair extensions which in different shades that will match your hair color. You can choose from straight, wavy or curly, whatever you want!! 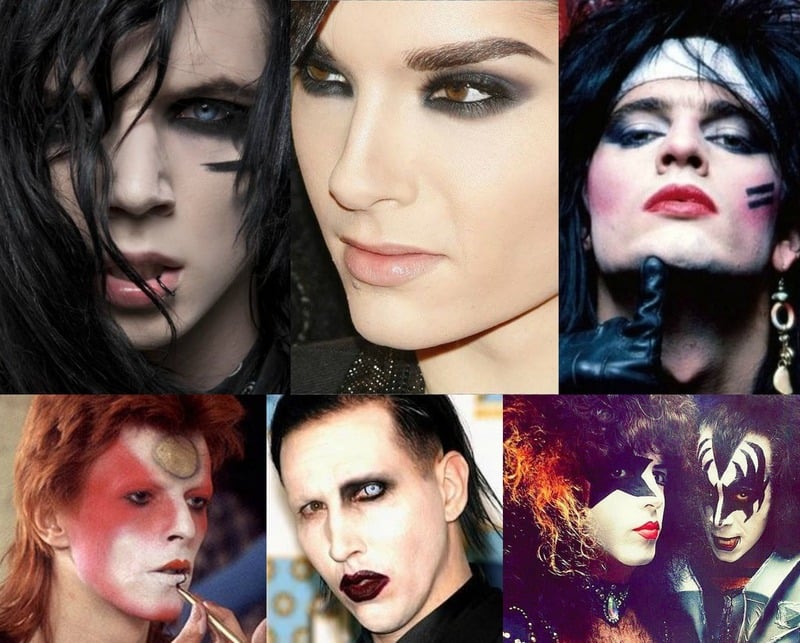 Say hello to “guyliner” and “manscara”. Yes, makeup wasn’t (and isn't) just for women to enjoy. Most musicians rocked the stage with their glamorous eye makeup and face paints. From white face paints to colorful ones, they’ve done it all; glitter, eyeliner and lipstick have been a staple for glam rock.

From the thick face paints of the 70’s to smokey eyes of present make-up artists, glam rock icons have maintained their signature stage persona through the use of cosmetics. Modern rock artists were able to tone it down by sticking to the cool smokey eyes. 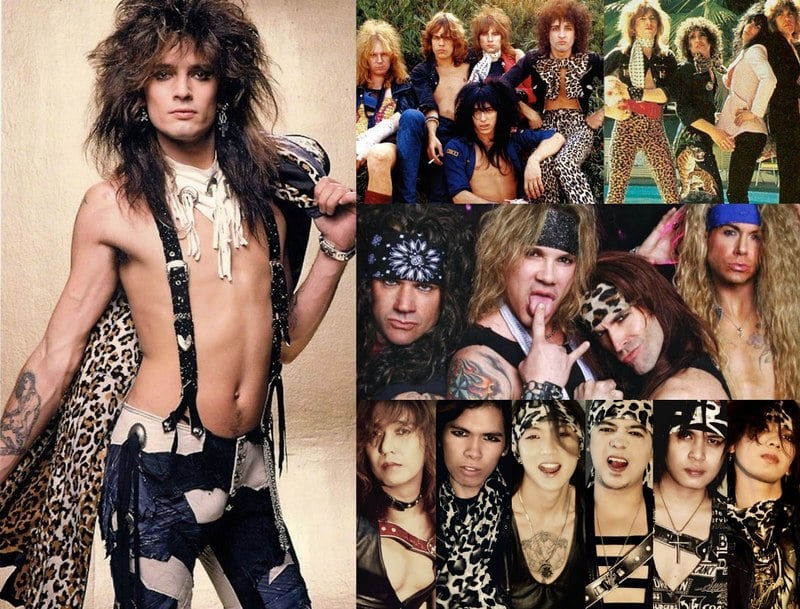 If you don’t have any ensemble of leopard print, then you need to get one! Worn by many famous rockstars, animal prints compliment the texture of spandex.

Their vests, bandanas, and even their guitars had it! Animal prints were not originally worn first by women in the fashion industry. Don’t you think men look hot with it? Check out Motley Crue's Tommy Lee! 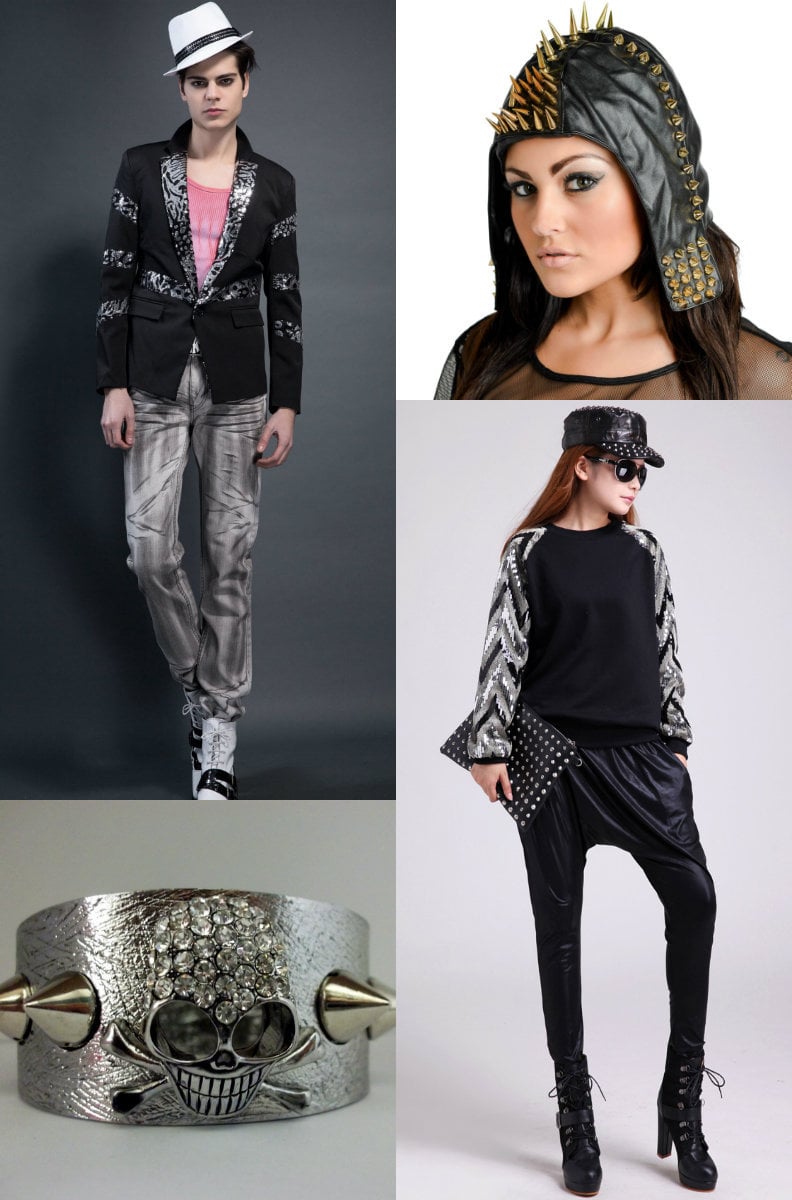 Popularized by David Bowie, the gaudy sequins and glitters remind us of disco lights and flashy shows. Though now it must be a major fashion faux pas when worn today, being a rebel you just love to turn some heads. 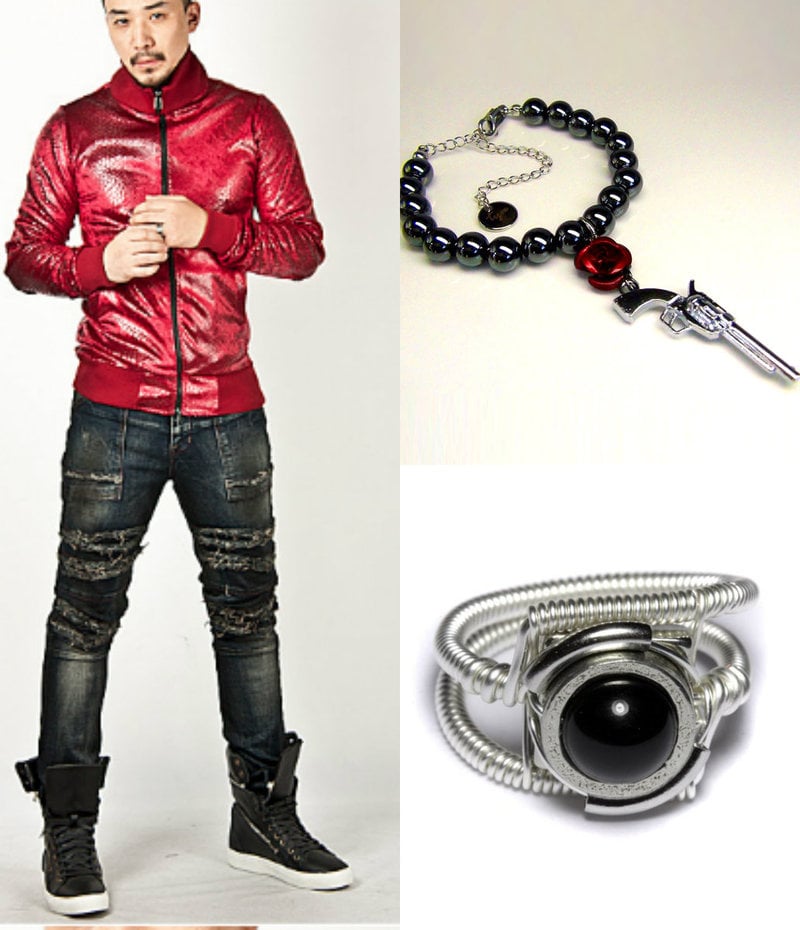 Although shiny, metallic tops are used to add glamour byseveral musicians. Silver metallic ensembles were pretty popular in the post glam era especially when paired with black spandex, and it's easy to recreate the look today with a pair of leather-look leggings and a metallic tee. 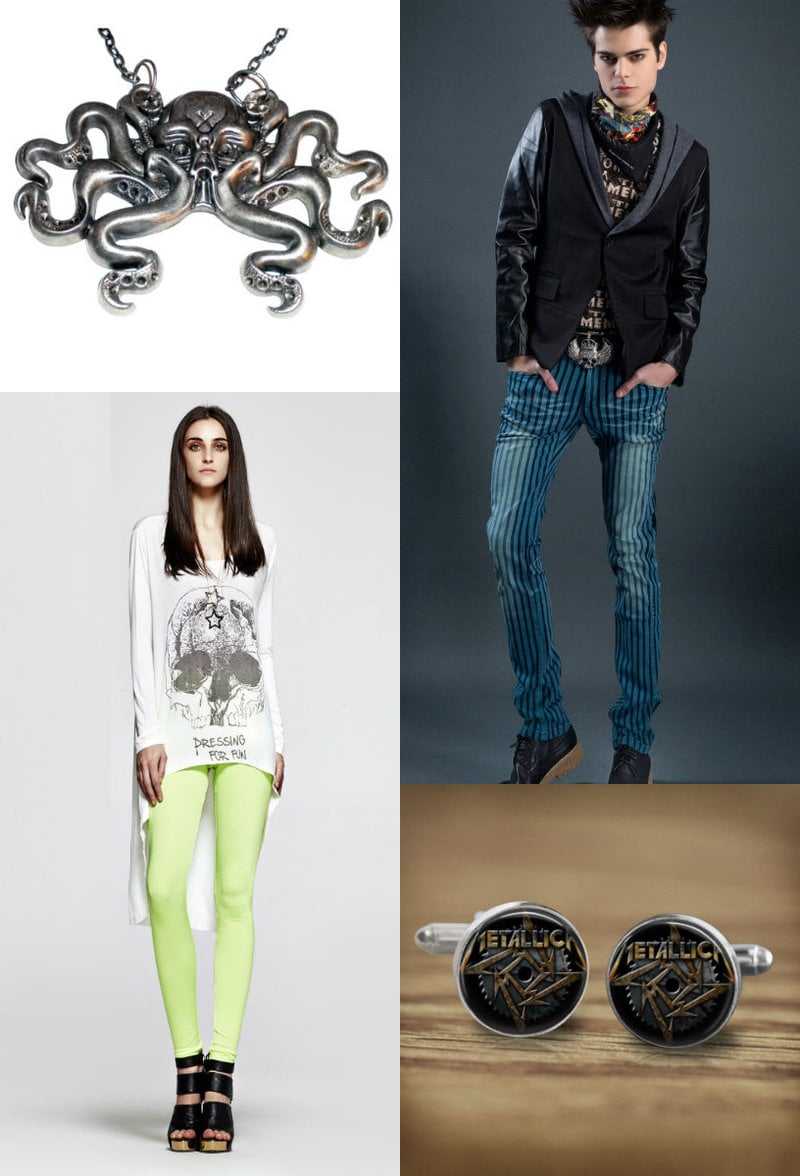 The tighter, the meatier. Just kidding! The tighter the better, because when it hugs your legs we can see those well-toned glutes and hamstrings. Skinnies and leggings for girls and guys used to be in, and after several fashion trends from loose pants to bell bottoms, the skinnies and leggings are back! Don't be afraid to play with fabrics and patterned pants. The idea is to stand out! 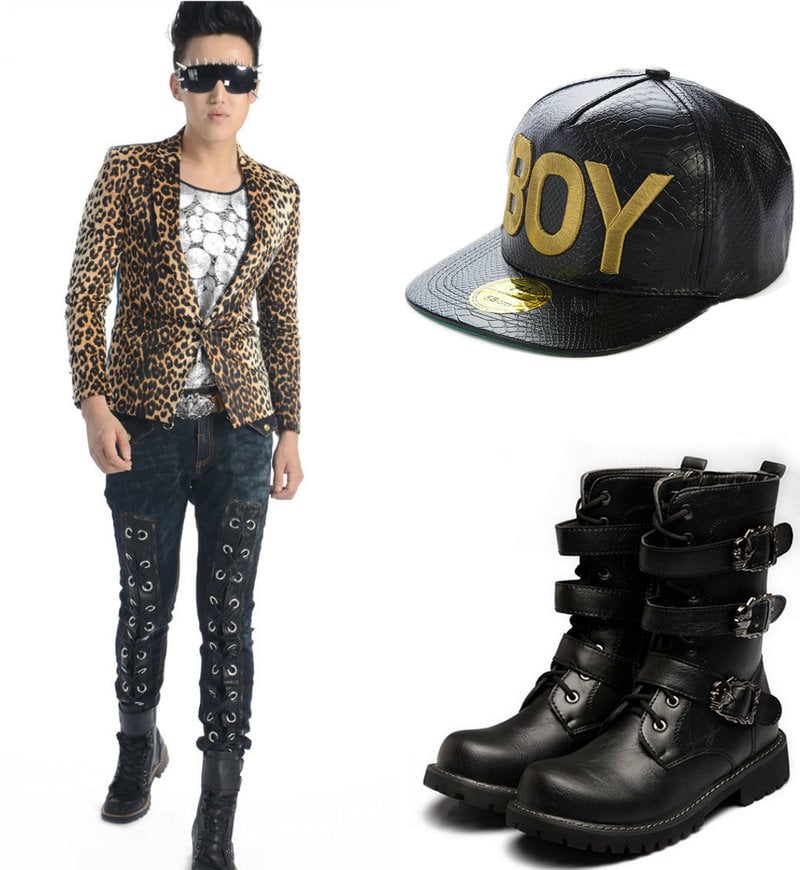 Platform boots popularized by KISS were worn on spandex and metallic outfits, together with an armor. Compliment these shoes with bandanas, buckles and chains to really look like a rocker. 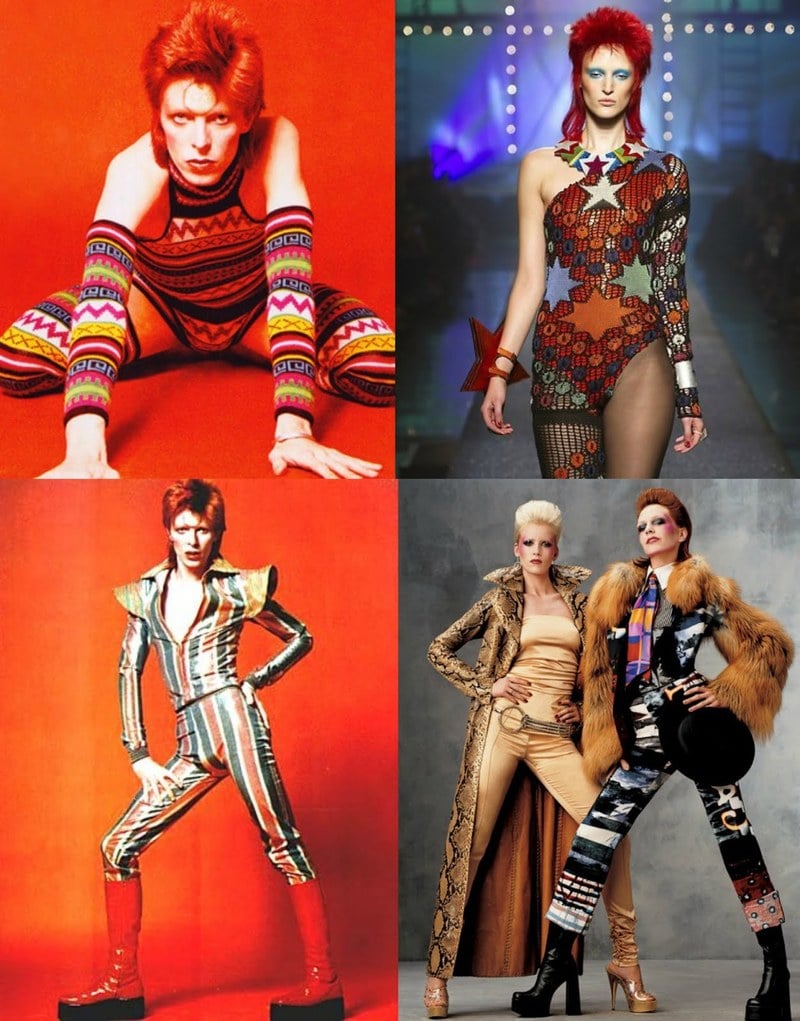 According to T.rex’s frontman the late Marc Bolan, glam rock’s already dead, and has been reborn into “Shamrock.” Since it came to mainstream, the essence of it is already gone.

However, it’s still being revived and has improved over the years through fusion with different subcultures. By going haute couture, the runways have celebrated and major fashion houses commemorated the colorful days of Ziggy. Stardust is also refered to as the darker side when glam rock meets glam metal. 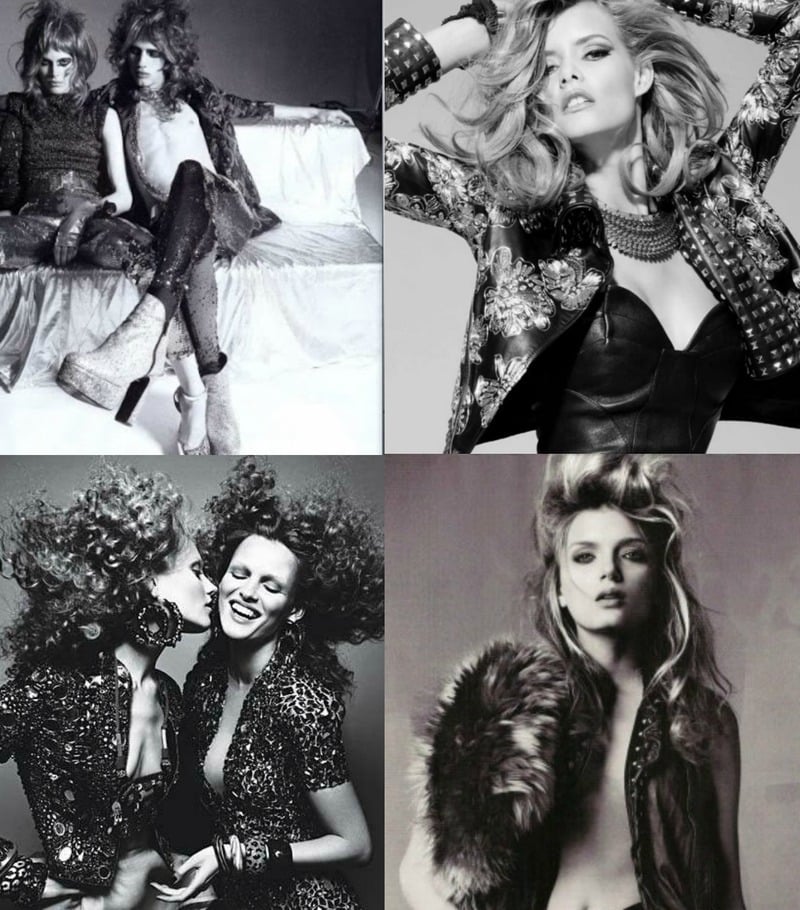 All these various street style ideas have Glam rocks uniqueness and touch. However, it doesn’t matter what your rocker fashion choices are, glam rock

Fashion has no definite rules when it comes to layering and matching. So have fun and rock on!!

Any style tips that you love which emerged from your favorite musician? Who’s your favorite ‘80’s band? Leave your feedback below!

Everything you need to know about Grunge Fashion

Check out the RebelsMarket Guide To Your First Metal Concert