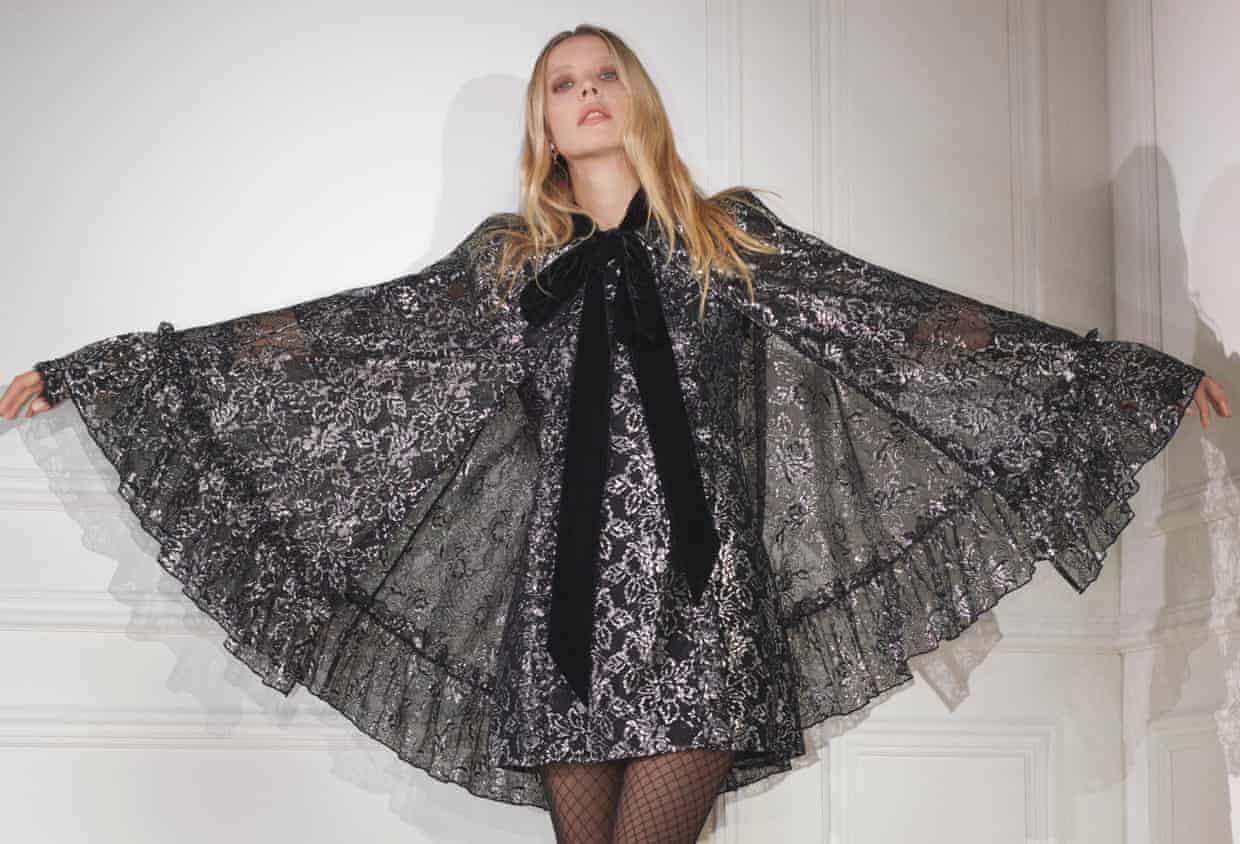 Some of you probably might not have heard of this aesthetic, but I bet you’ve seen it. It’s pretty hard to miss. Envision Halloween outside the expected Halloween season, of bell-sleeved dresses with frills amidst a room full of tarot cards and crystals scattered around.

Introducing “witchcore,” a mysterious and supernatural aesthetic with a darker allure than most. Nothing like a global pandemic to channel the aspects of old-school Gothic glamour with a dash of witchcraft.

Here’s everything you need to know about this new-rising fashion.

What is Witchcore — A Brief History 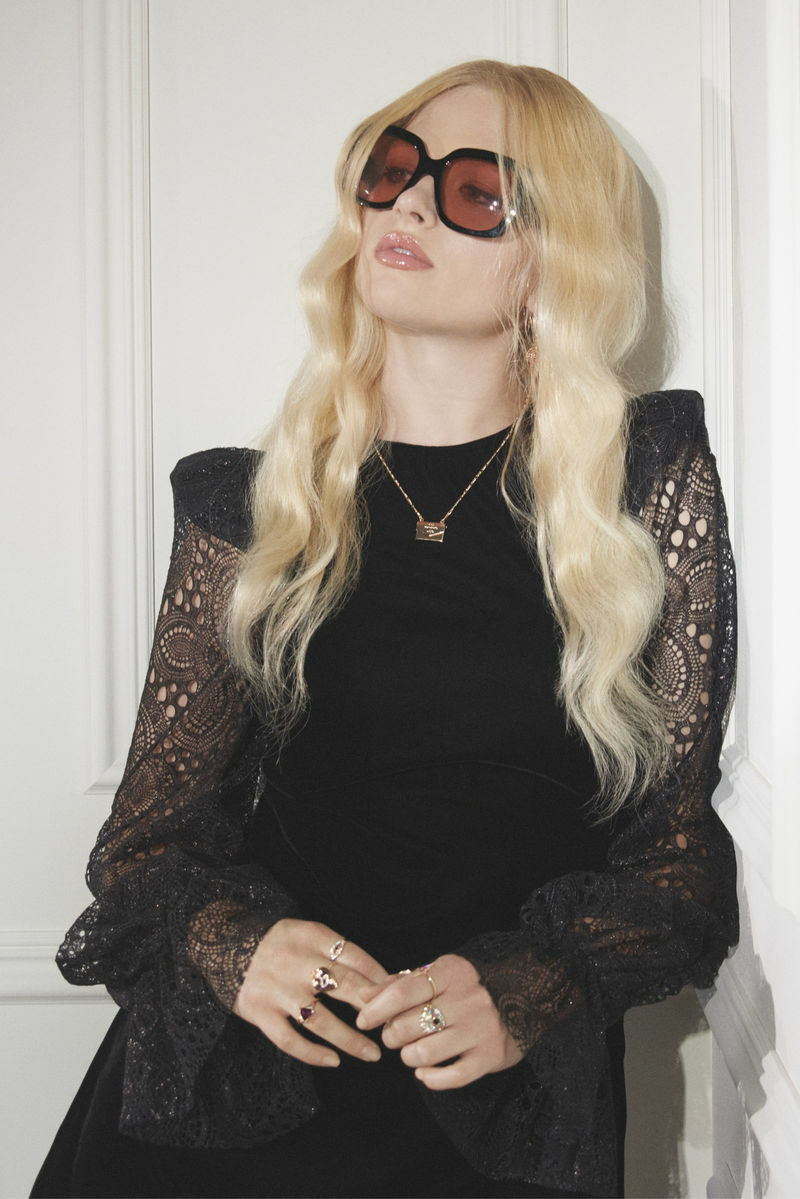 Even though this term is coined by the Gen-Z TikTokers recently, being and looking like a witch is not a new trend. I mean, how many of us dressed up as witches for Halloween? I bet everyone did at least once. There’s nothing quite like being the strong, powerful magical being in a Victorian-era gothic dress, is there?

Not to mention the number of big-name fashion designers whose witchcore-like designs have been walking the runway for decades now.

While playing witch has been a thing for a while, it wasn’t until the recent global pandemic that shed even more light on this identity. Many self-identifying witches congregate on various social media platforms, primarily TikTok and Instagram, to present their take on spells, occult rituals and even share a few how-to tutorials. 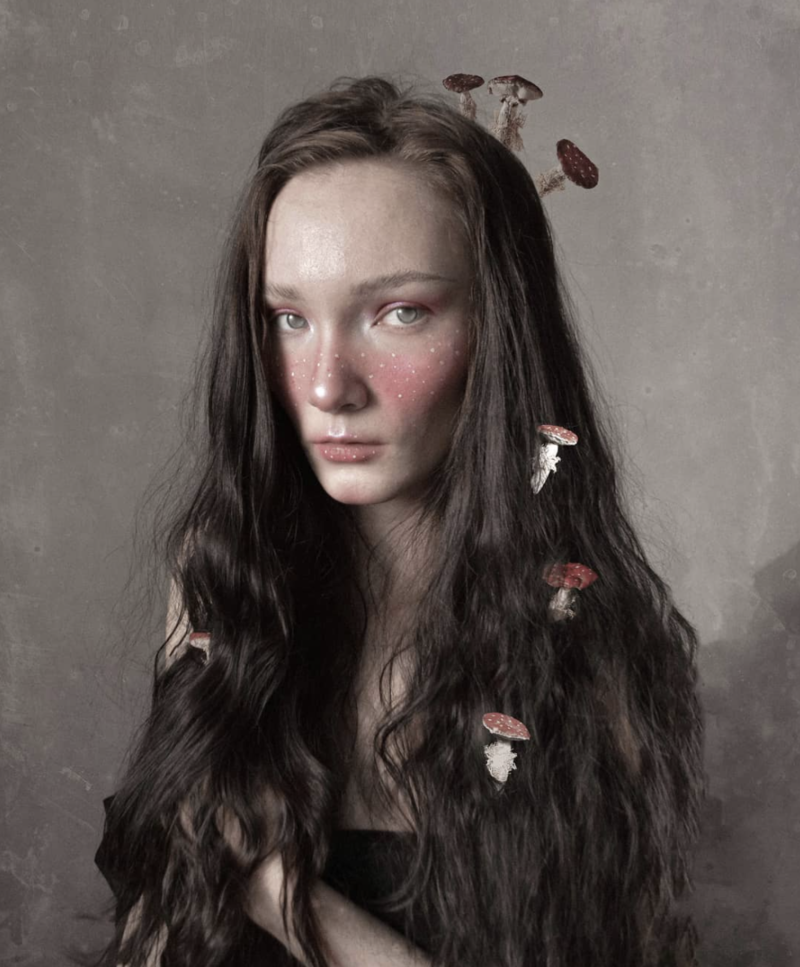 The witchcore trend is a huge breakout online. TikTok is technically the home of this witchy aesthetic. It has become some community on the interweb. The hashtag #witchesoftiktok has approximately 1.5 billion views, and the hashtag #witchcore has 25.5 million at the time of writing. I bet it’s way past skyrocketed now.

And while the aesthetics of it is important, it’s the content from witchcore that stands out. People are claiming to be able to cast spells like conjuring the wind spirit or tell the future by looking into their crystal sphere or reading tarot cards.

I kid you not! A witchy TikToker claimed to have summoned a storm while she was supposedly working on her energy skills. Others are sharing interior mood boards and offering tips to curating the ideal witchcore aesthetics.

The author of Craft: How to Be A Modern Witch, Gabriela Herstik, said, “While we don’t have the opportunity to express ourselves outside of our homes, there’s a comfort in wearing something that makes you feel connected to your magic. Things like TikTok and Instagram pick up the pace of this self-expression.”

It’s no doubt that this aesthetic is more than just a theme and roleplay. People worldwide feel connected to witchcore because it gives them an outlet to express themselves during this time of mandatory isolation. 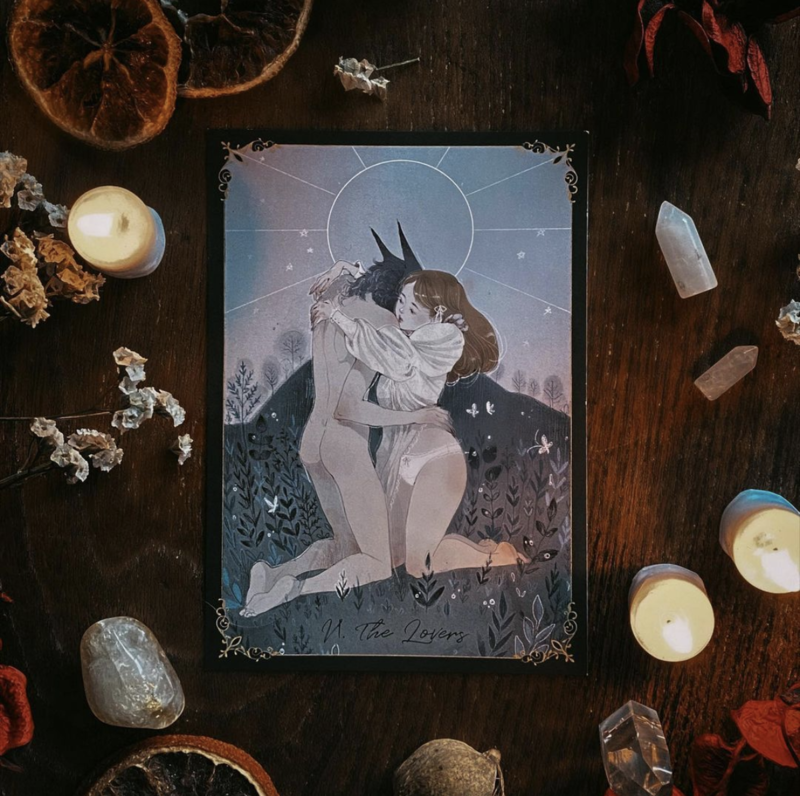 Some believe that the emergence of witchcore is connected to current social, economic, and political states. Instead of being just a mere aesthetic and something to be a part of, it has beliefs attached to it.

The idea of witchery has long been connected to realizing and normalizing women's darker side by rejecting the modern idealizations that women are angels. Part of it all is to recognize and cancel out the stereotype of witches being evil and be whoever they want to be, as they choose.

A documentary maker, Carla Cordell, believes that there’s a link between witchcraft and feminism. There’s also this idea of non-binary that’s prominent within the witchcore movement. Recently, feminism has been quite the hot topic of discussion, so having witchcore rising during this time does feel like everything is coming hand-in-hand.

Another primary belief of the witchcore community is being one and connected with nature. Often, the pictures and videos of witchcore on social media are rooted in self-care. A couple of point-of-view shots of a stack of books or a soothing drink to start the day and others are like tutorials and tips on how to live a witchcore-rooted life.

The community preaches peace within oneself and Mother Nature even though they’re all looking like the baddies. This contrast of solemnity and calm against their appearance is quite refreshing.

On top of tips and tricks to living a witchcore lifestyle, the media online in the community often include tutorials that are often showing how to take moon baths. A twist on the typical bath and taken according to an individual’s lunar cycle to be more connected with nature and shadow work prompts the act of becoming aware of your own personal beliefs and feelings.

Self-care is more important than ever when we’re only out of the house once or twice a week to shop for groceries and barely get dressed up. The witchcore ideal is to keep not only the physical body healthy but also the mind. 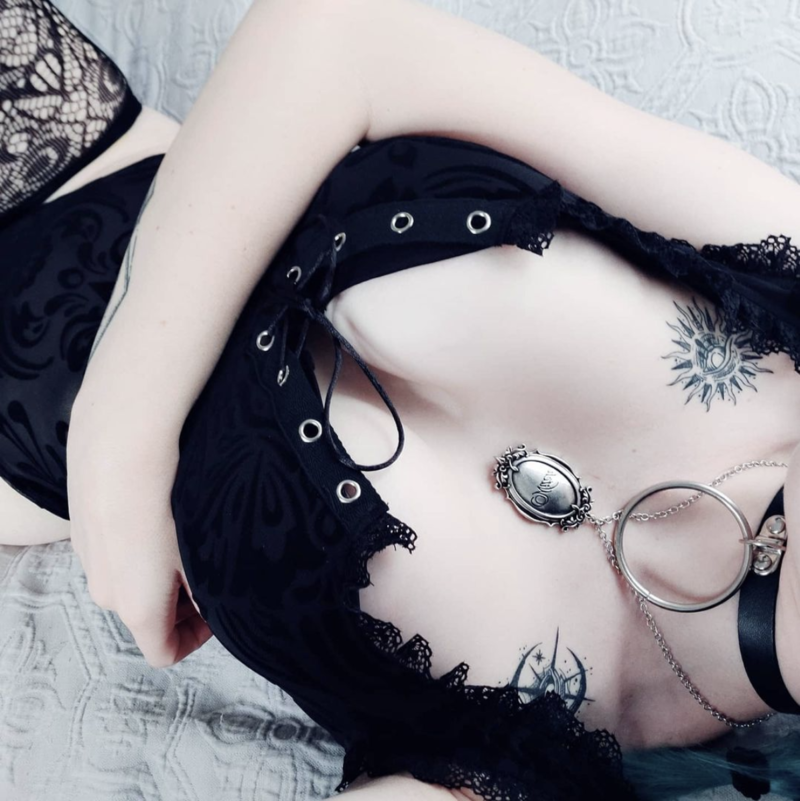 Some things speak for themselves, and witchcore is definitely one of them. But if we have to put the aesthetics into words, it can pretty much be summed up in three: black, lace, and frill. Witchcore fashion is easy to identify as soon as you see it. They’re not shy at all to show off what their community looks like.

As you can pretty much assume, the aesthetic is inspired by the magical beings, witches. Power and femininity are ever so present in their physical looks. And as mentioned before, this aesthetic is not a new one; it’s been around for decades.

Can anyone deny that celestial and lunar motifs have been in trend recently? Ghanni’s 2019 capsule collection is just an example of the chain reaction of inspiration. So as you can see, you can find witchcore not only on the streets but on catwalks and TV screens. 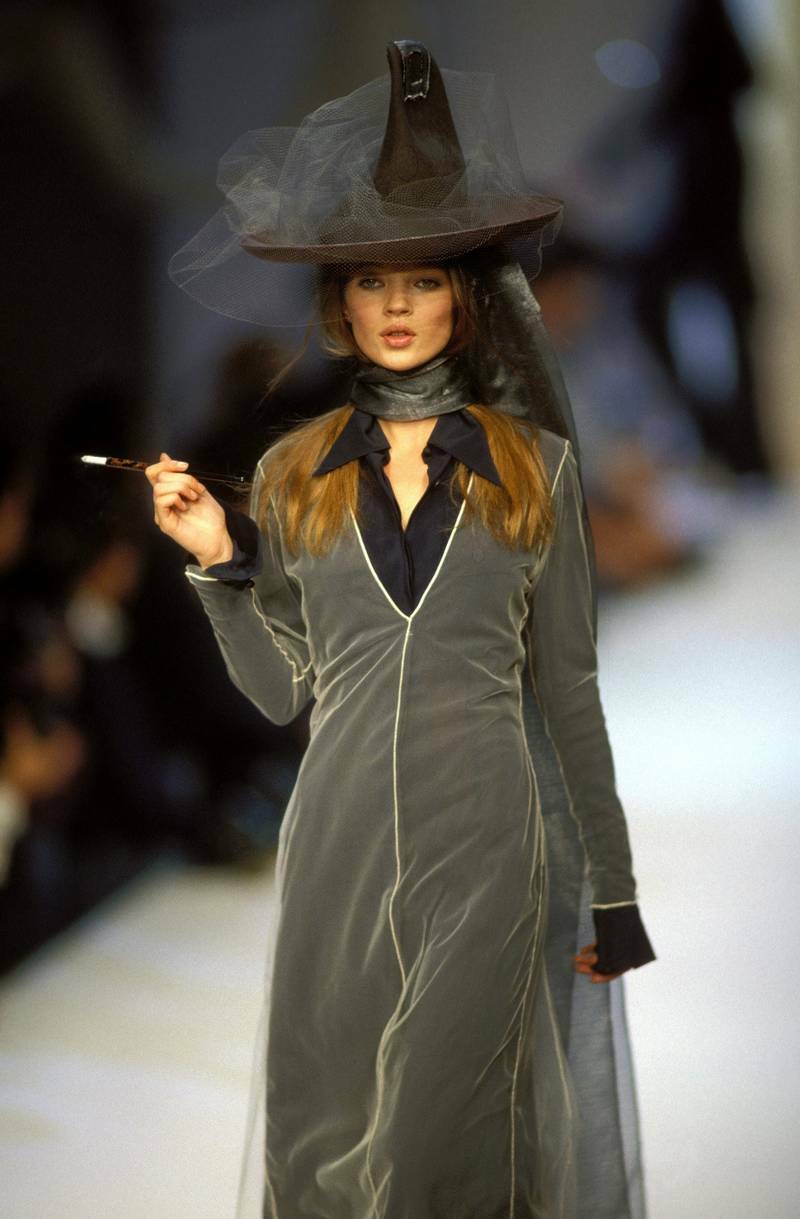 The witchy look didn’t come from witchcore. The fashion world can’t deny that it has some love affair with the occult that can be traced back decades. Luxury labels have had their fair share of witchcore-like designs proudly strutting the catwalk.

Designers have been experimenting with witchcraft motifs for quite some time — Vivienne Westwood even has a collection called Witches in 1983. The great Alexander McQueen had a whole collection in 2007 inspired by one of his relatives who was hung during the Salem witch trials.

If you look at Matine Sitbon’s SS93 collection, it encompassed the very definition of witchcore.

Witchy vibes aren’t the only ones being roped into the fashion world. The love for tarot cards is immense. Who doesn’t like to have the symbolism and macabre of tarot cards on their clothes? Dior’s 2018 resort collection was fully inspired by the Motherpeace tarot deck.

The latest fashion release that hyped witchcore up even more is the recent sell-out collaboration between H&M and The Vampire’s Wife, which has brought even more attention to this not-so-underground aesthetic. If you don’t already know, The Vampire’s Wife is a brand that oozes the magic lure of a folk tale.

As you can very much assume from the name specializing in bewitching dresses of frills, bell sleeves, and lots of lace. This brand is one of the few that’s bringing back the goth aesthetic elegantly and luxuriously for today’s generation. Its collection with the fast fashion retail brand remains its essence of the original concept.

So witchcore is nowhere near a new and underground community. It has been slowly creeping up on the rest of us for decades, and we’re only seeing their peak now. 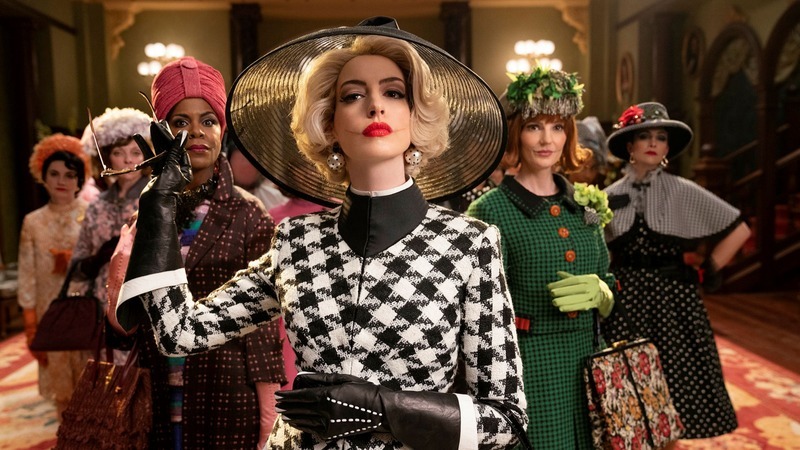 And we can all admit that witches have made more than a few appearances in Halloween films and the fashion to match is the very definition of witchcore. One of the most recent films that feature the witchcore aesthetics is the Roald Dahl adaptation of The Witches, featuring Anne Hathaway.

We have to give the costume designer some serious credit. Joanna Johnston took inspiration from 1960s style icons like Marilyn Monroe and Jackie Kennedy to create Hathaway’s power shoulder, houndstooth print, and bouffant wig look. And it’s in the details that topped it all off; red lipstick and evening gloves bedazzle the whole vibe even more.

Another recent witchcore-inclusive film that hit the screens is the sequel to The Craft. The storyline itself is already about witches, so you have to assume the fashion is exactly how one would imagine witchcore to look: grungy dresses with chokers, darker makeup, and crucifixes.

And as previously mentioned, these are just two movies out of dozens if not hundreds of movies that included or featured witches with perfect witchcore fashion. 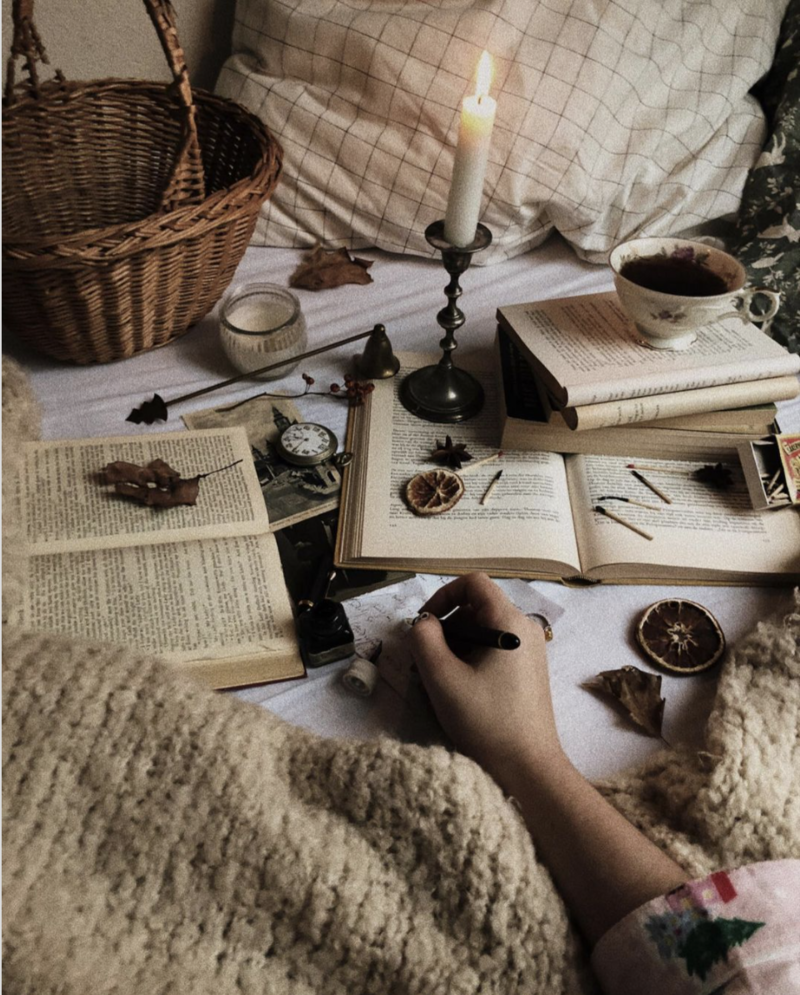 A quick search of #witchcore on Instagram would give you more interior pictures than outfit ones. You’ll see bedrooms, living rooms, bathrooms, and homes in general decked out with dried flowers and herbs, lighted up candles, crystals, and moon-shaped accessories. That’s the standard modern-day witchcore starter pack.

But while it has a standard handful of features, you’d be surprised at how creative these online witches can get. You get to see homes decorated from everything dark and every to homey and comfy. All are still witchcore vibes.

And if you’re looking to spice things up in your room and add a sprinkle of witchcore to it, there are tons of tutorials online by the witchcore community who are happy to help you get started and make your witchcore dreams come true.

It’s not at all difficult to pull off the witchcore look and lifestyle. Grab a few frilly dresses and have a couple of moon baths to start your journey. It all comes down to being connected with the world around us and with each other.

So will you give witchcore a shot? Let us know what you think of this mysterious and peaceful aesthetic in the comments below!

Good Witch or Bad Witch: How To Get The Look

Witchy Wonderland: How to Add A Pagan Touch To Your Winter Wardrobe