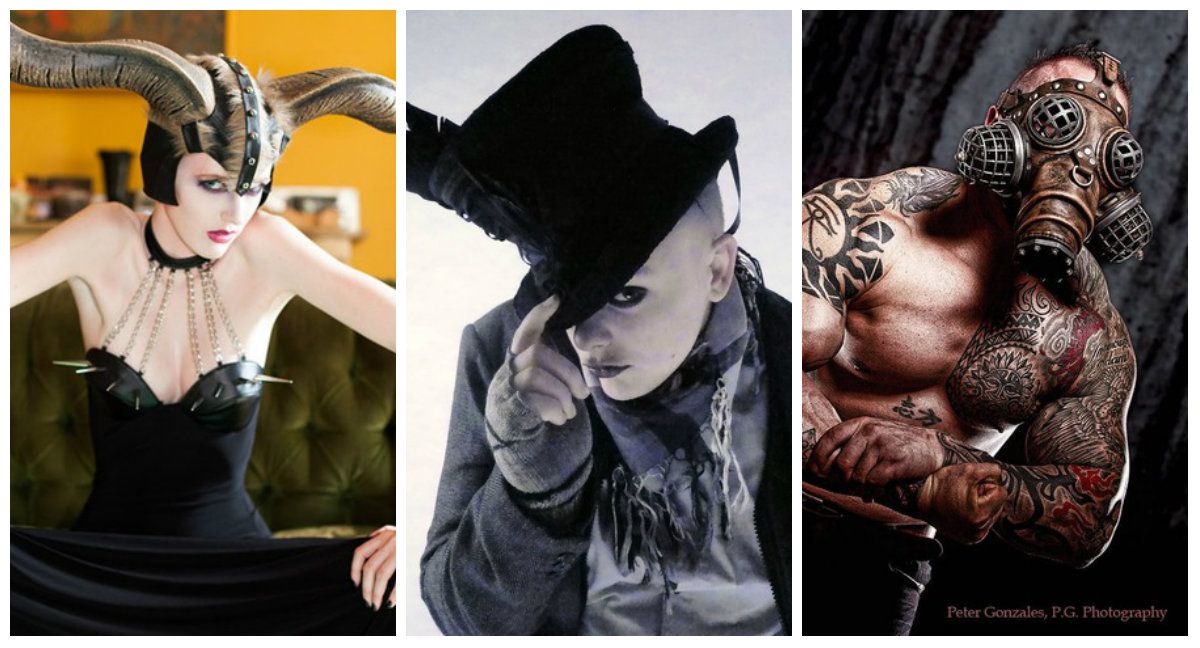 In recent years, showing your love of literature has become far more socially acceptable. Seeing Harry Potter, Game of Thrones, and Hunger Games t-shirts has become the norm and having the best Cosplay outfit has become an acceptable goal outside of the traditional Con circles. 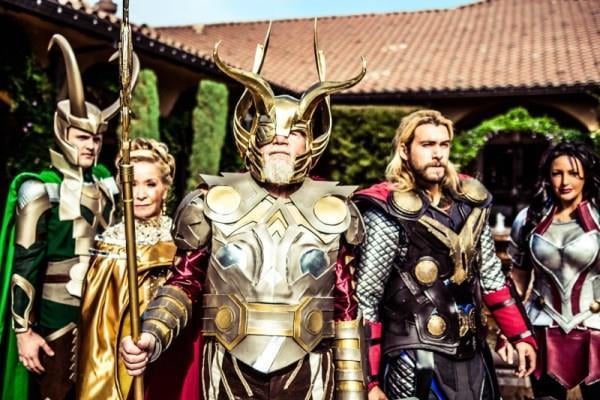 But increased visibility does not mean fashion inspired by fiction is new or just a trend. Many have been showing their genre love for decades and others have worn fashion rooted in fiction without realizing they could be missing out on the reading material that inspired their look.

We’re going to take a look at some of the more popular fiction to fashion genres and how people express their style with components from the pages of their favorite stories. If you love the look but have never read the genre, consider checking out the accompanying works of literature!

One of the oldest and most easily identified styles based on fiction is gothic fashion. Featuring pale complexions, dark; often monochromatic clothing, and rich fabrics such as satin and lace; most people can identify a goth fan from afar. 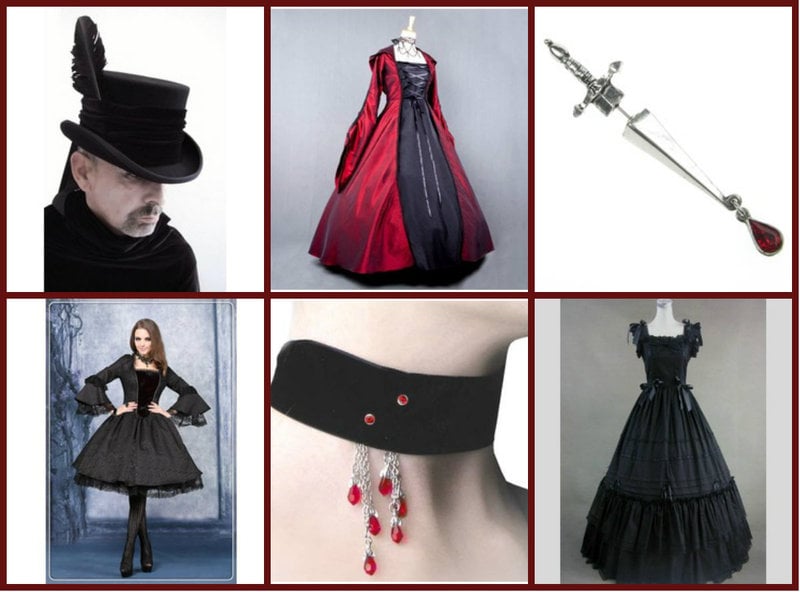 Though members of the goth subculture have long fielded “jokes” about suicidal depression and devil worship (seriously, they are not funny- stop that); the look is actually a blend of historical romanticism and horror. The death related imagery is an outward expression of the acceptance of mortality, recognition of life’s horrors, and the desire for a love that is eternal. The style has evolved from the traditional staples of Victorian mourning attire to blend modern styles with a dramatic nod to the genre’s historic inspirations. 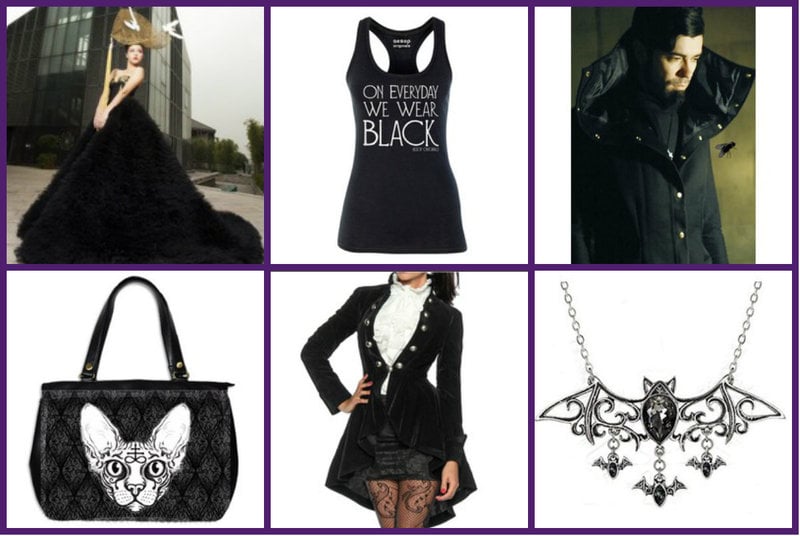 The imagery inspired by gothic fiction is easy to fall in love with. Charlotte Bronte, Sylvia Plath, Edgar Allen Poe, Anne Rice, and Bram Stoker will give anyone unfamiliar with the genre a new appreciation of the style. 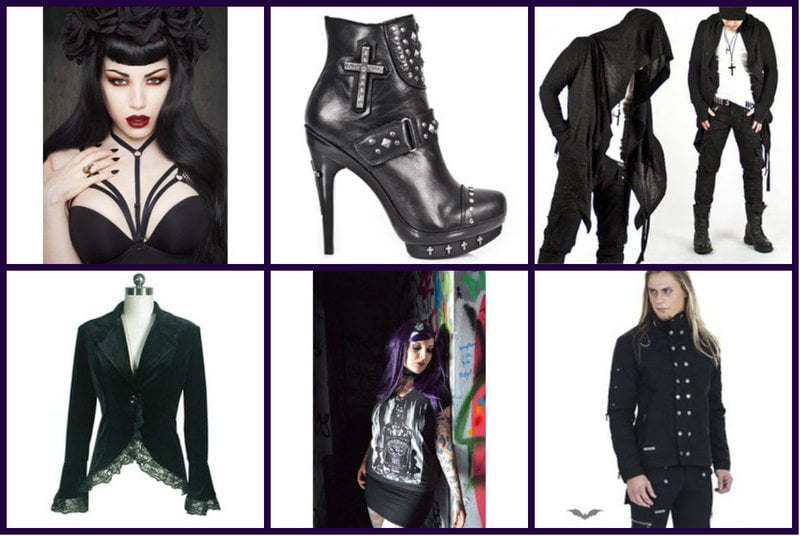 Another easy to spot style inspired by fiction is steampunk. Though this genre is relatively young in both fashion and literature, the immense popularity has made the look easily identifiable to even those unfamiliar with other aspects of steampunk culture. 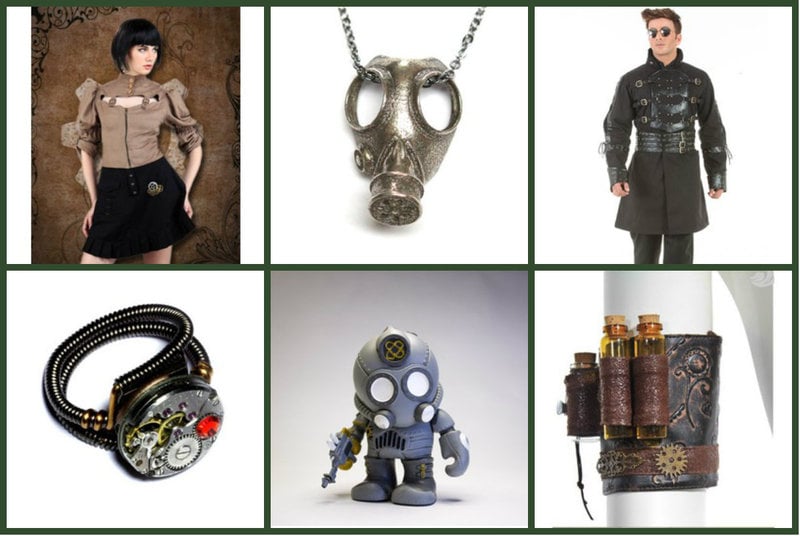 Out of necessity, early pioneers of the Steampunk movement integrated victorian clothing staples with handmade accessories to achieve the looks they desired. Today, steampunk apparel is available for purchase, making the style attainable to those who do not have the time or skill of early fans. 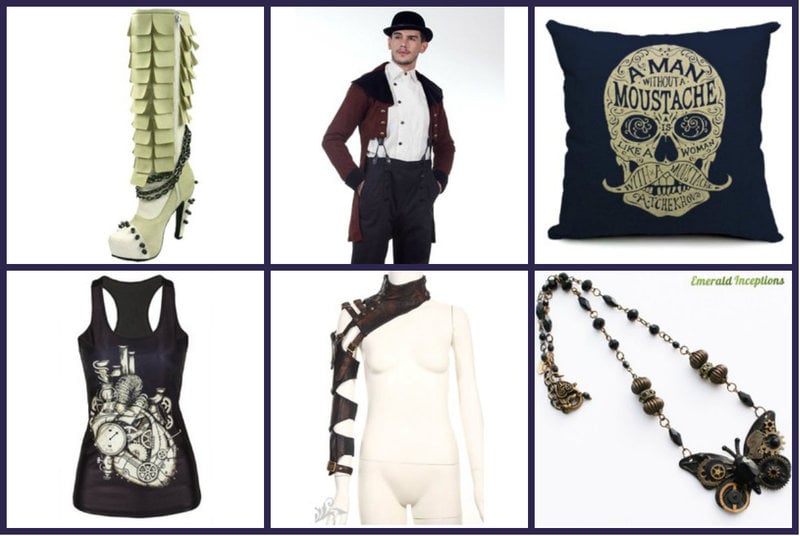 Steampunk literature draws inspiration from early writers such as H.G. Wells and many pieces have been adopted into this genre since its official creation in the 1980s. Reading Sir Arthur Conan Doyle after devouring Tim Powers is sure to lead to mental images that blend Victorian components with Sci Fi inventions; which is the heart of Steampunk culture. 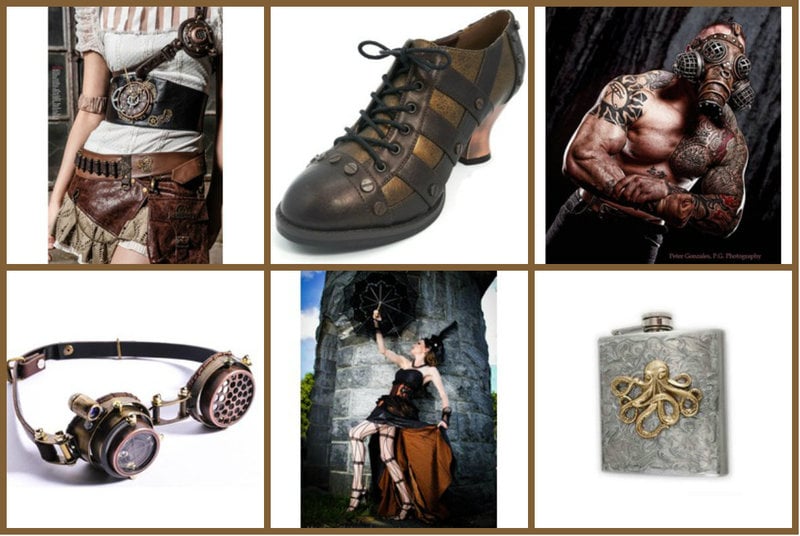 Ghost stories have been told for ages. Monsters, spirits, and the occult have been favorites of readers for many years. Though many will debate if these topics are fiction; they are normally classified as such and so we are including their influence here. Modern masters such as Stephen King, Dean Koontz, and Clive Barker are keeping the tradition alive and inspiring new generations of supernatural fans. 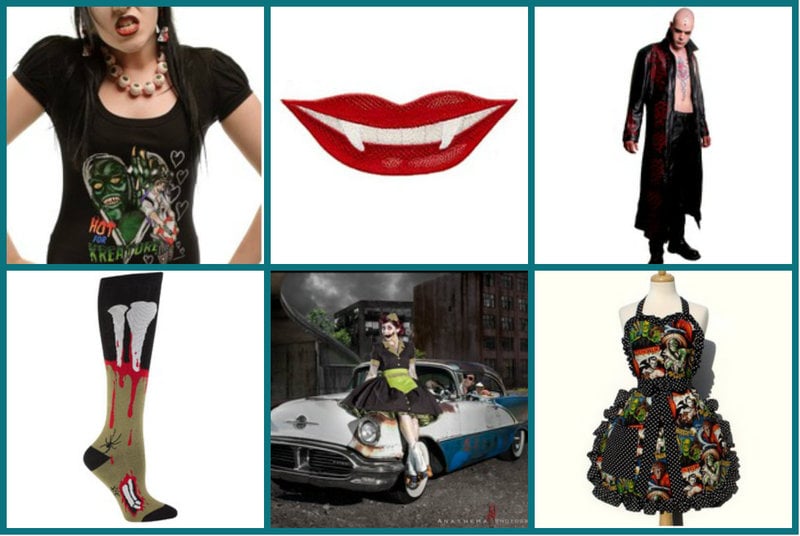 The battles of good and evil are often portrayed with imagery associated with angels and demons. Amulets of luck and protection developed to encourage magical intervention. 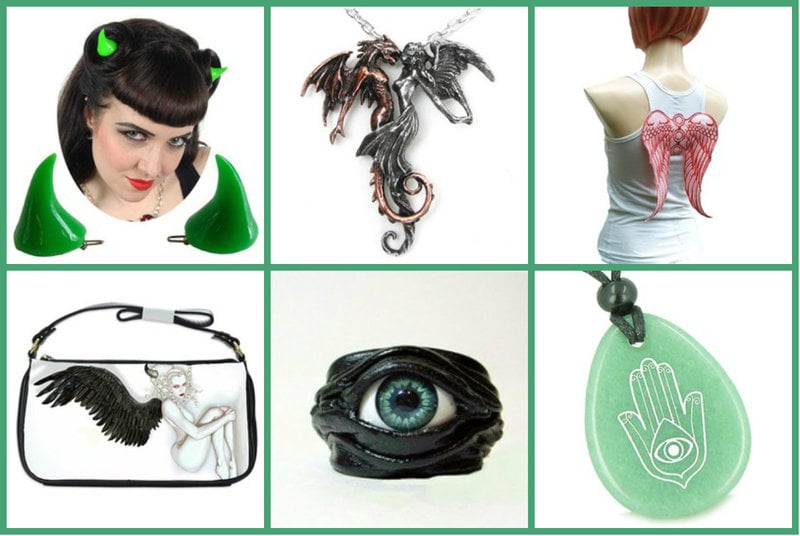 Think the supernatural influence is reserved for fans of horror and superstition? Think again. The boho style favored in recent years at music festivals draws inspiration from classic fictional images of witches and tribal fortune tellers. 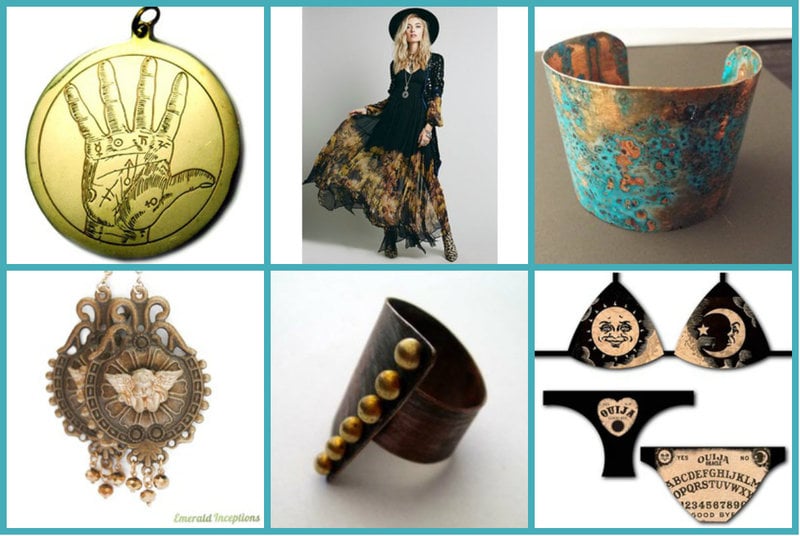 Supernatural styles can be found here

Classic authors like Hans Christian Anderson and the Brothers Grimm were able to weave tales of magic that sparked the imaginations of all who encountered their stories. 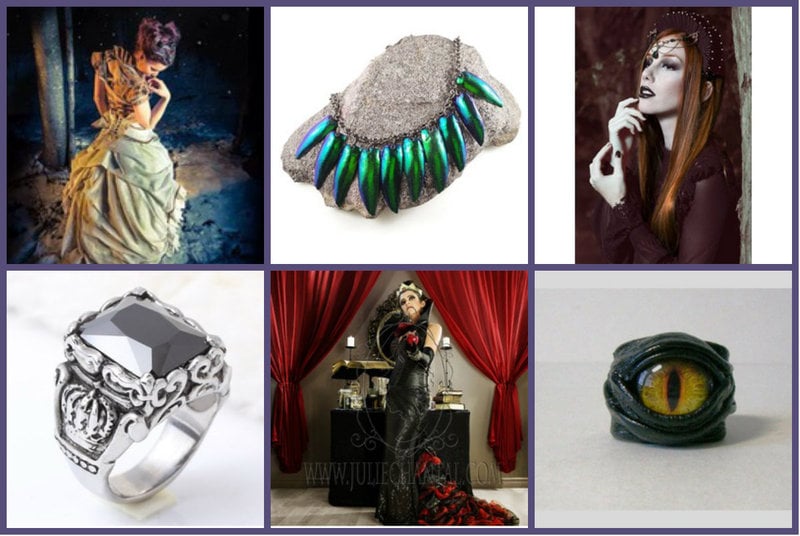 Modern fantasy writers like George RR Martin and J.K. Rowling are continuing the tradition of classic fairy stories and their wildly popular series have been a huge push behind the acceptance of “geek culture” in modern society. 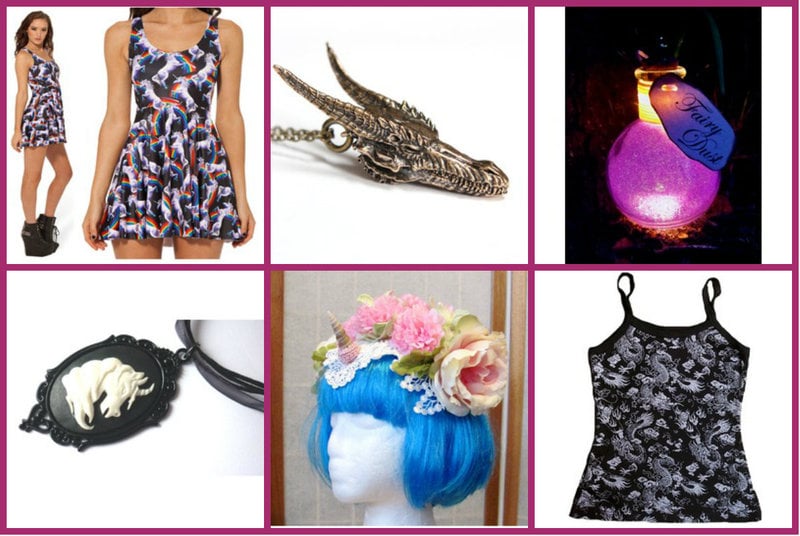 For many, fashion inspired by magical stories and fantastical beasts is a way to add spark to their daily routines. For others, touches of fantasy are a way to make formal events like proms and weddings a truly magical experience. 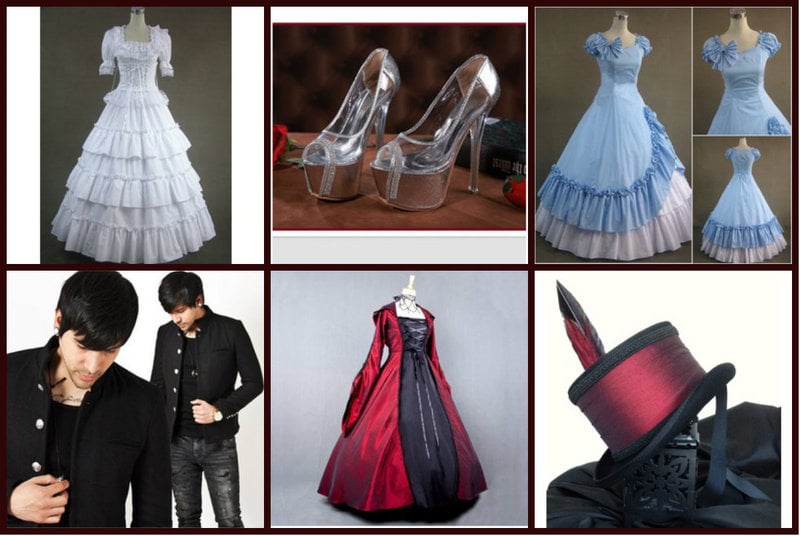 Add a bit of fantasy to your life - shop here

Western fiction portrays a lifestyle that was a historical reality and remnants can still be seen today in areas of America. The fashion associated with this genre has now spread to urban settings and can be seen with futuristic touches, thanks to the stories that grew from Wild West roots. 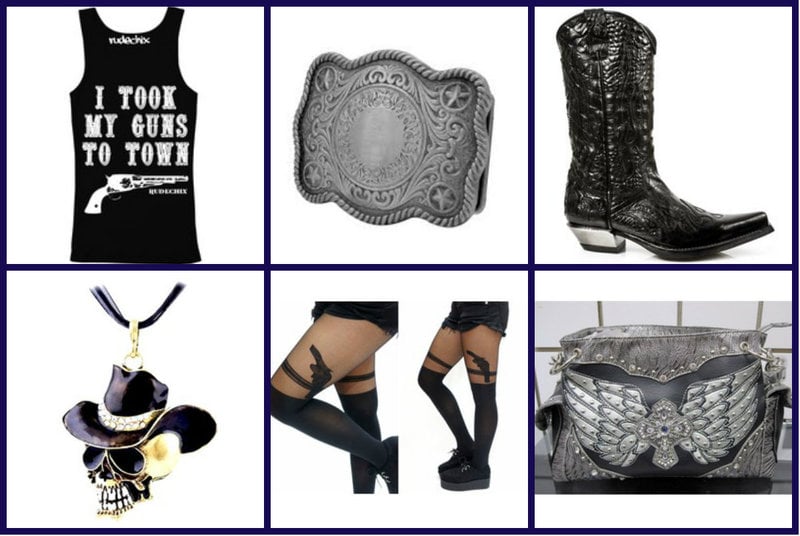 Cowboy pioneers bent on starting a new life in undiscovered territory hold a fascination for people who admire courage and respect for nature. 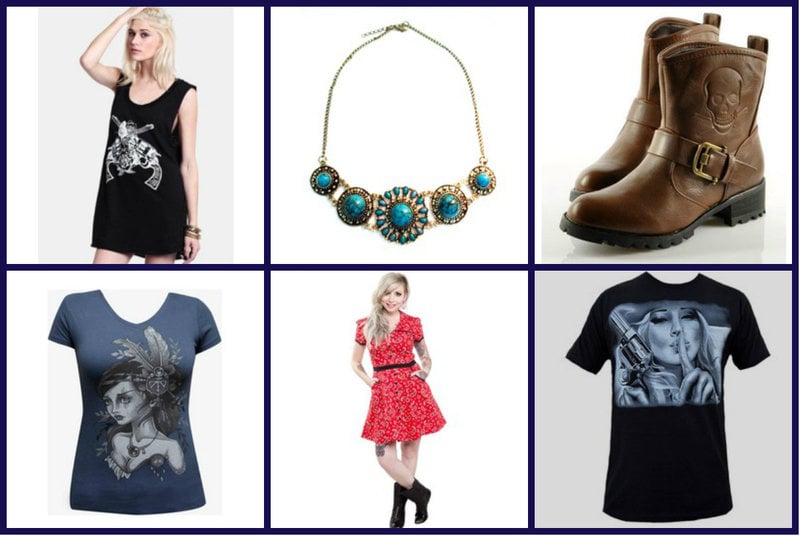 Western fiction allowed characters to morph between cowboy and outlaw, good and evil, while still remaining relatable to the audience. This allowed more readers to relate to the characters and dream of their own version of riding off into the sunset. 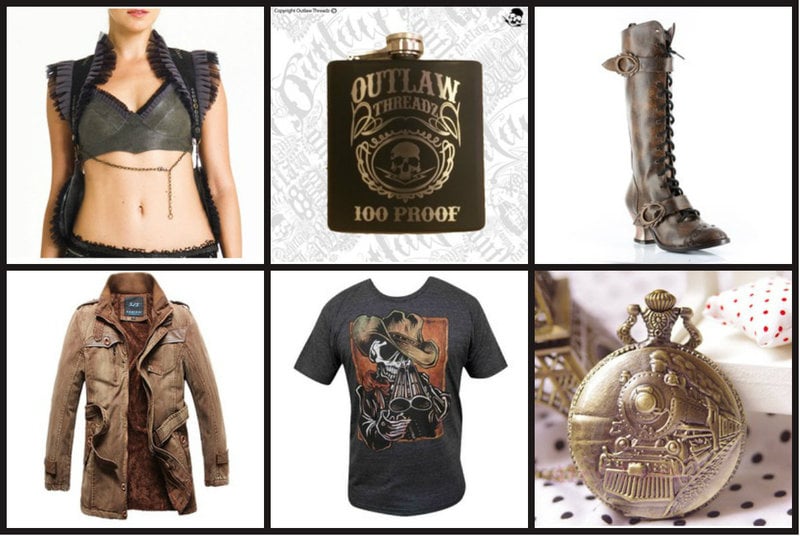 Fashion inspired by the Wild West can be found here

From the Odyssey to 20,000 Leagues Under the Sea; nautical themed literature has sparked the imagination of many. 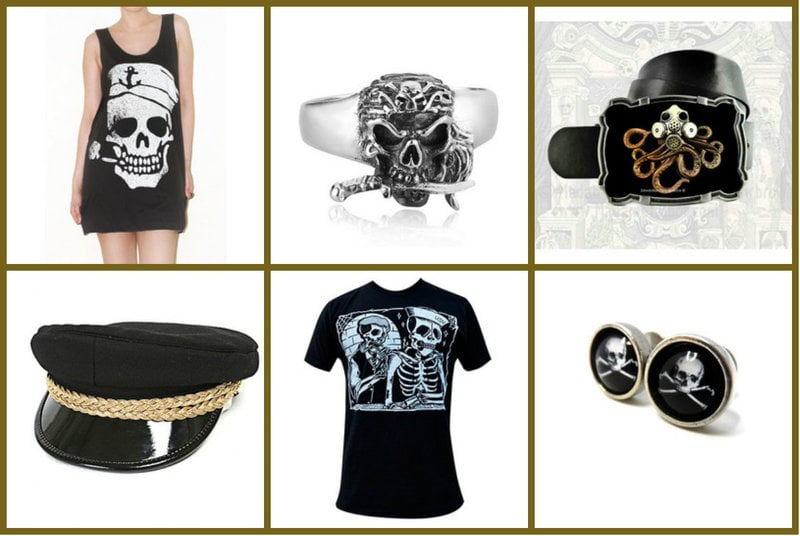 Like the vast oceans that inspire these novels, the characters that star in these stories cover a lot of territory. Pirates, sailors, and mermaids are among the heroes and villains that have arisen from the deep. 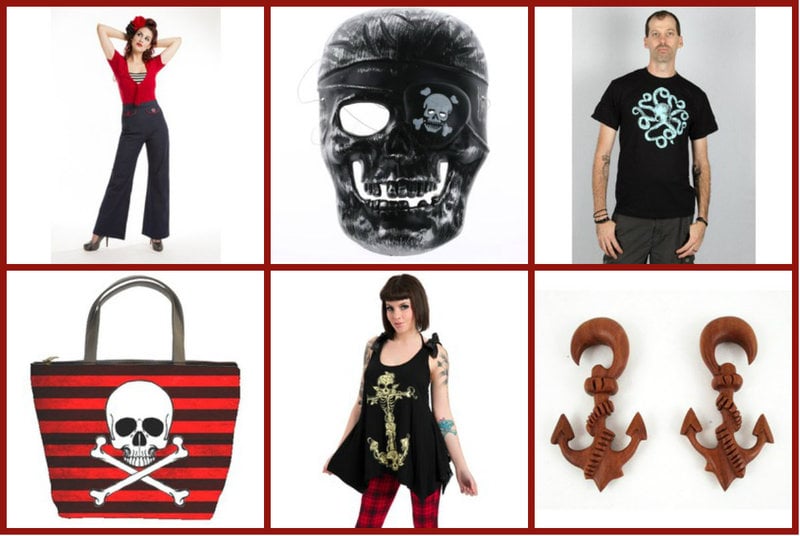 It is said that humans have explored more areas of outer space than they have the oceans of this planet. There is no telling what new sea creatures will be found to inspire the next nautical themed fashion treasures. 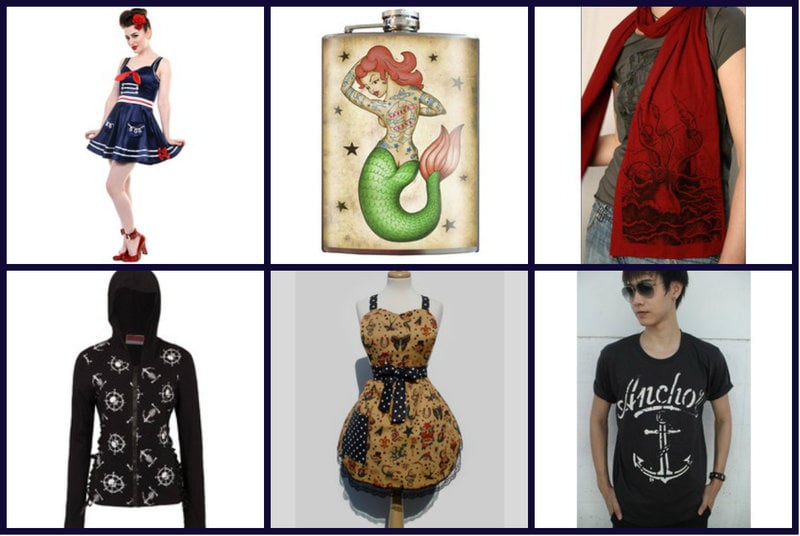 Whether your root for the coppers or the criminal;, finding out if the one whodunit gets away is always a thrill to read. Thomas Harris, Stieg Larson, and James Patterson have modern masterpieces with classic mystery appeal. 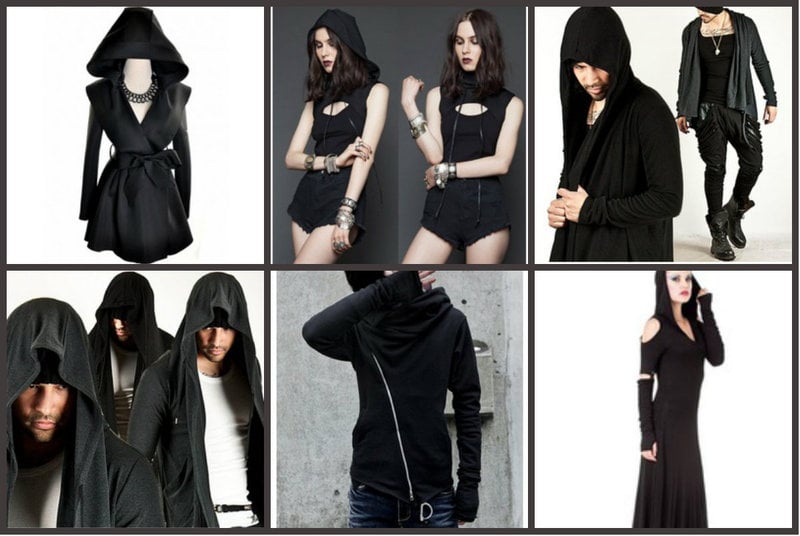 Maintain an air of mystery with these hooded pieces here

Humans have long pondered the heavens at night and of course they began to tell stories of what could be up there. From 2001: A Space Odyssey to The Hitchhiker's Guide To The Galaxy, theories about life in space often lead to new ideas of what humans (and aliens) will be wearing. 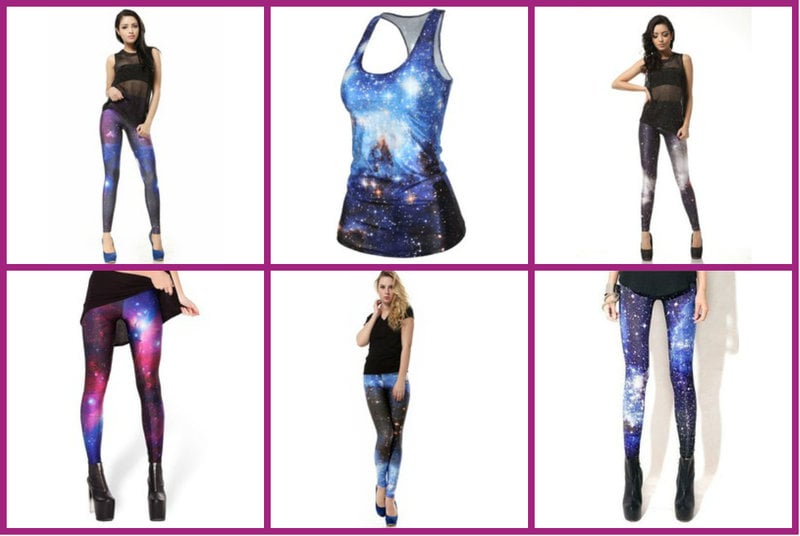 The end of the world as we know it is a concept that is often explored in fiction. Suggested causes of the Apocalypse vary from biological to technologic and offer an interesting glimpse into the general fears of modern man. 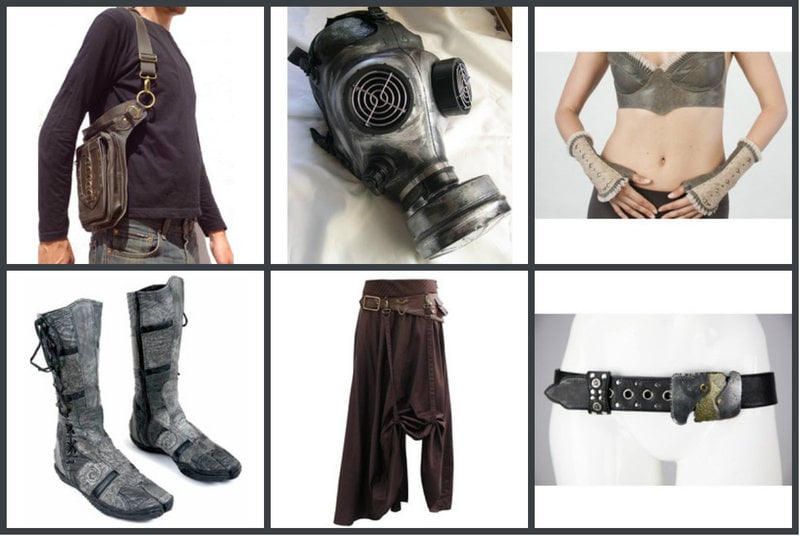 This genre has seen a recent surge of popularity, particularly in the young adult category. Books like The Hunger Games and The Divergent series offer a look at dystopian society for the younger population. 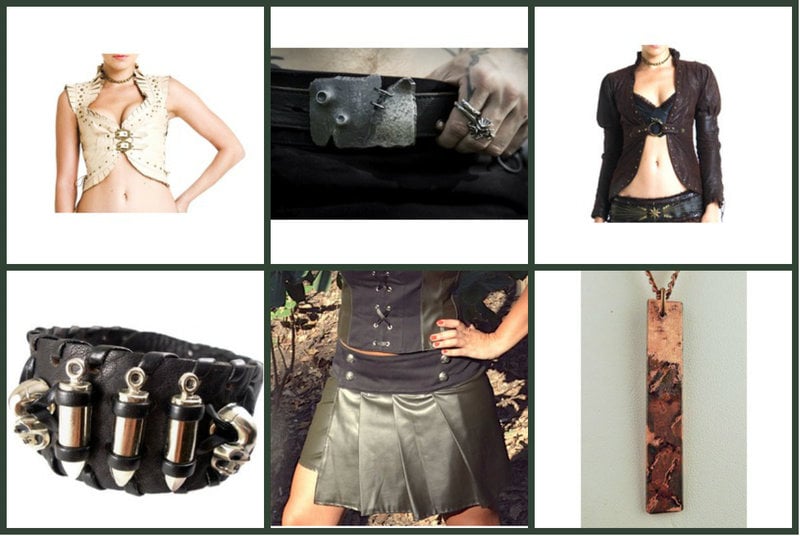 Though a few stories show a post apocalyptic future as one that has grown from the ashes to create a society that is more lovely than the one that existed pre tragedy; most tales paint a portrait of a world in shambles where people piece together to survive in any manner possible. 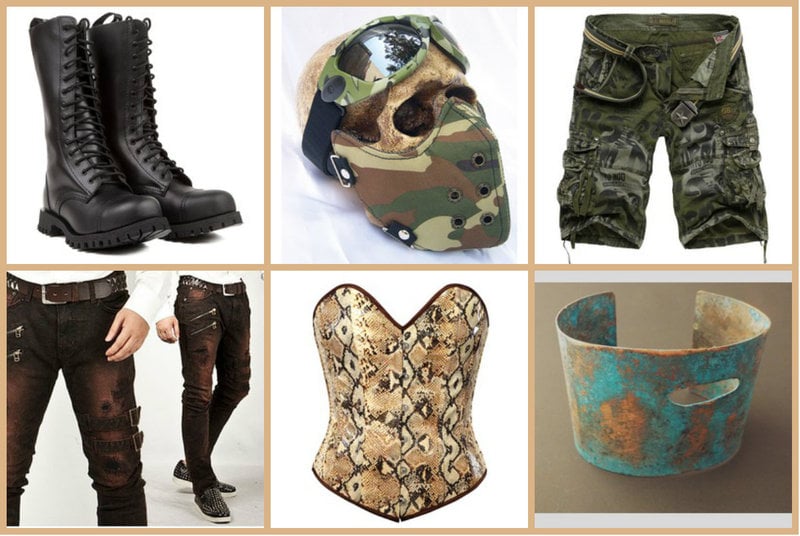 In literature and fashion, genres often cross and meld to create something new and beautiful by blending core ideas. Mixing ideas should be encouraged to push boundaries and inspire new ideas.

Which of these styles do you favor? Leave your feedback in the comments section below!

What is going wrong with the Goth subculture?