With Halloween creeping around the corner, our mood, souls and spirits have started to take a spooky turn, a spooky turn indeed. With this in mind, we put our heads together and thought about the scariest, most sinister and downright bloodcurdling characters (or creatures) served up in by popular culture over the past few decades or so - and one horrific manifestation kept on appearing before us…

Clowns. Yes, creepy, creepy clowns. While clowns might have been conjured up as the jesters of the circus world, these red nosed, flipper footed, rainbow wearing, pale-faced jokers with the unsettling laugh and the ill-mannered smile have made some of the most nightmarish characters of the big and small screen over the years.

Yes, there's no getting around it: clowns are creepy. And here are the creepiest clowns of them all - hold onto your hat. 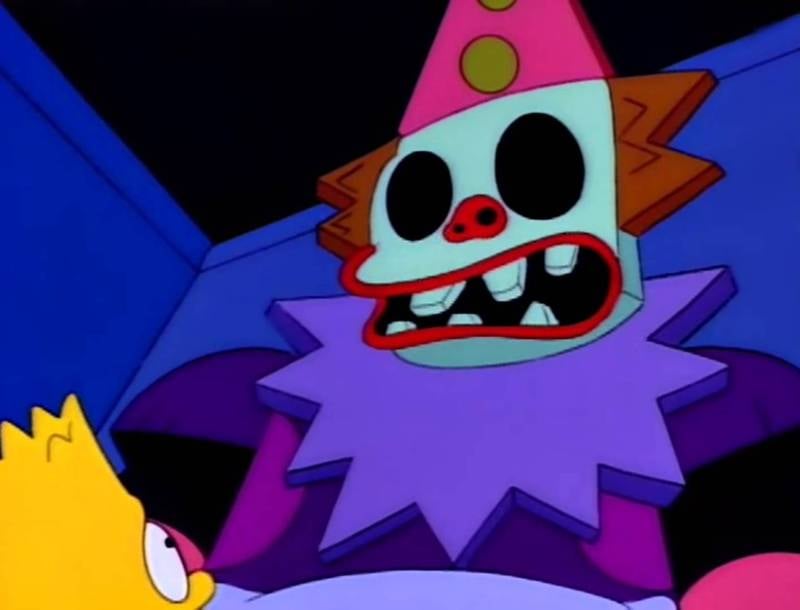 “If you should die before you wake, *evil laugh*.”
―Bart imagining the clown talking

First up, we have Bart Simpson's first bed: the clown bed. When Bart turned the tender age of one-year-old and outgrew his cot, Marge and Homer had the typically ill-advised idea of building him a toddler bed in the shape of a horrifically tombstoned toothed clown.

Quite rightly Bart's clown bed scared the living daylights out of him from day one and his lack of slumber made him delirious, causing the clown to move and talk to him in the skin-crawling tones of Hank Azaria. This creepy clown represents the power of the circus jester and its ability to get the better of us, seeing and experiencing things that aren't really there - or maybe they are - who knows for sure?

Either way, this is one creepy clown. 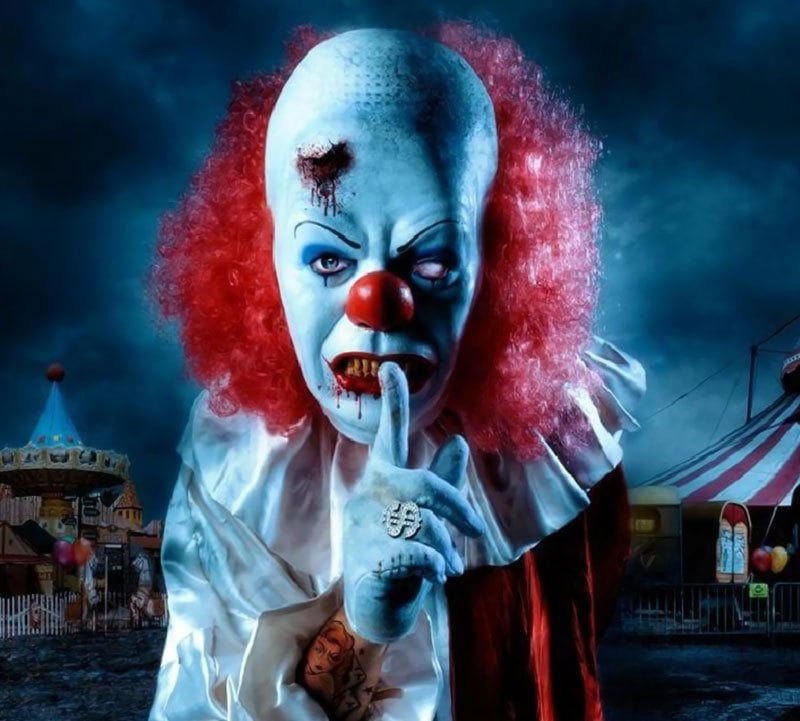 Perhaps one of the iconic of all sinister big screen clowns, Tim Curry's Pennywise as seen in the cult horror, IT, is perhaps the very reason that people got a severe phobia of clowns in the first place.

Tim Curry was masterful as the mind-bending, sewer-dwelling Pennywise, and despite the fact that he ended up morphing into a silly looking giant spider thing, those piercing eyes and that pant-pooping smirk is enough to keep anyone awake at night. 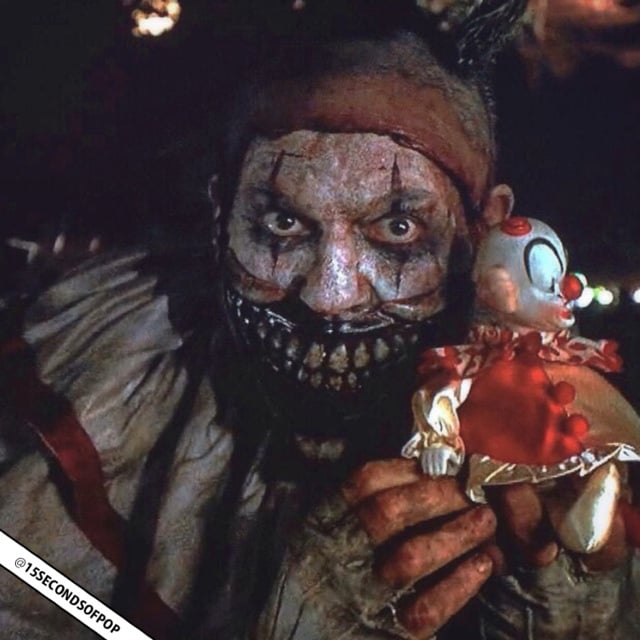 Going on a single glance alone, Twisty, as rampantly featured in American Horror Story's Freakshow season, is arguably the most eye-scarring clown in the entire lineup. Oh, those perpetually sad eyes coupled with a stitched-on scalp and mutilated mouth are the ingredients that nightmares are baked with - and if you watch this guy in action, you can forget going to bed for a good while.

The back story of Twisty is a tragic and gory one, which does give you a morsel of empathy for the creepy clown. But, when you see what he gets up to and you experience the utter fright that he will generate deep within your soul, you won't feel sorry for him for long - trust us.

Twisty truly represents the tears of a clown, but in the most horrendous way imaginable. 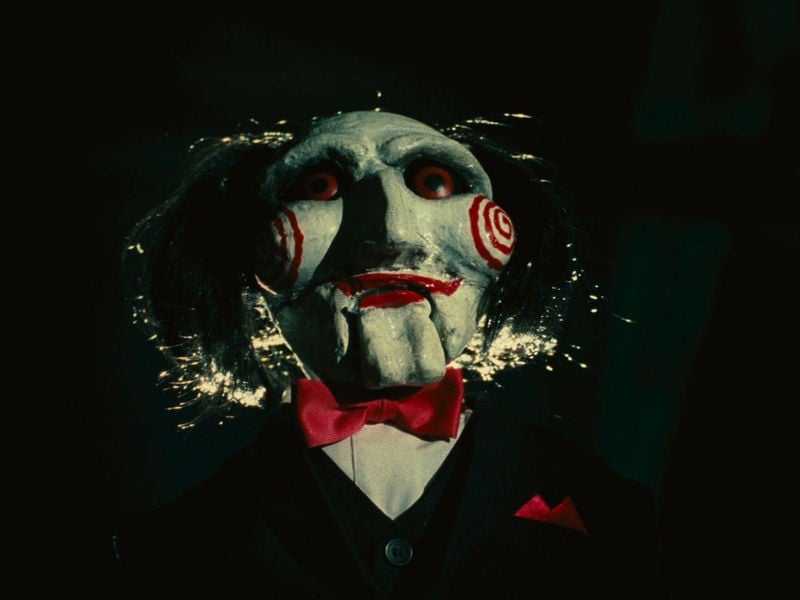 Man oh man, Billy, as seen haunting the entire Saw franchise is the magically evil combination of a puppet and a clown - plus he's powered by a complete madman - yes, he's triple frightening.

When he pops up on a TV screen or wheels into a room on his miniature trike, clad in a perfectly presented red bowtie, it's clear that nothing good is going to happen - in fact, something terrible and often involving blood, guts and general viscera is going to occur. His look is so iconic it makes for a genuinely scary, although easy, DIY Halloween costume

Billy is the most psychotic of all the clowns in the lineup and that plastic yet searing facial expression and muffled serial killer voice are the very things that make him most threatening - don't let Billy into your life, at all costs. You'll only regret it. 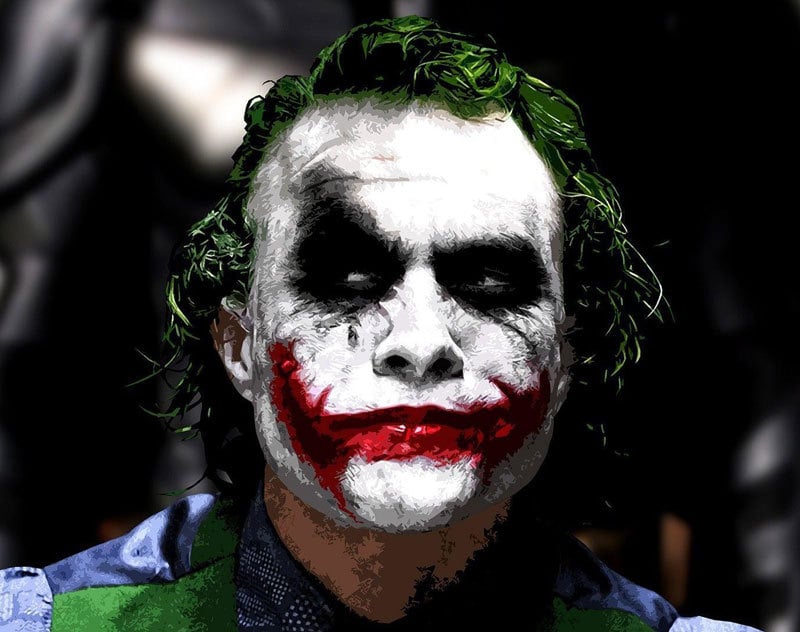 The Joker has appeared in many forms and on many mediums over the years from comic books to televisions to big Hollywood productions - and in every incarnation - he has been frightening. Not always in an obvious way; it's the very demeanour of The Joker that's most unsettling, with a smile that sends your eyes plummeting towards your feet at warp speed.

Over the years, the likes of Cesar Romero, Jared Leto and Jack Nicholson have all brought The Joker to life in his make-up-caked, defiant and downright terrifying glory. But, in our opinion, the most unsettling and flawlessly presented of them all has to be Heath Ledger's. Rather than  prattle on about why we believe this to be true, here's a clip so you can see for yourself:

There you have it - five of the creepiest clowns ever conjured up within the realms of popular culture - these guys are genuinely terrifying - so good luck getting to sleep tonight.

Did we miss any creepy clowns that ought to be on this list? Let us know in the comments!

How To Throw The Ultimate Halloween Party