When you think of the 1940s, many images may come to mind. You may picture pin-up girls, USO shows, and Rosy the Riveter. All of these styles epitomize the decade.

But what did the average woman wear in the 1940s? Let’s take a closer look at the most popular styles in women’s fashion during the forties. 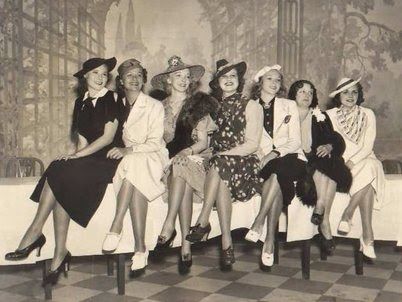 Image credit: Fashion Through the Years

Women’s fashion in the 1940s was strongly influenced by WWII. With more and more women entering the workforce, the styles of the day changed.

Traditionally, women had stayed home, but now, with so many men overseas fighting in the war, women had to take on new roles.

Naturally, this affected women’s fashion choices as they needed more functional clothing. Fabric shortages also had a direct impact on what women wore.

What were the most popular clothing styles of the 1940s?

With women now in the workplace, the popular styles of the day combined looks that were both feminine and masculine.

Dresses were known for creating the perfect hourglass figure. Even the pants women wore in the forties gave this effect. However, shoulder pads created a more masculine silhouette.

The combination of squared shoulders, a shapely waist, and a flowing skirt or wide-leg pants created the trademark look of the 1940s. 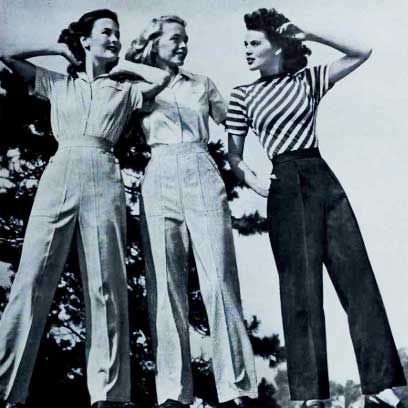 Because of the war, women began working in factories during the 1940s. As a result, they began wearing wide-leg pants, which was uncommon before the forties.

Skirts and dresses could be dangerous in factories because they could snag on machinery. So women began to wear pants instead.

At first, women simply wore men’s pants. However, it didn’t take long for pants specifically made for women to become common. Before long, women were wearing pants as a part of their daily wardrobe rather than just in factories.

Pants in the 1940s featured high waistlines and wide-legs. Like the other styles that were popular in the forties, the pants of the day helped women achieve an hourglass figure. 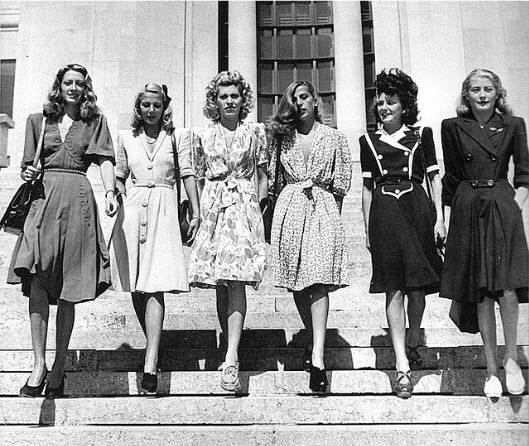 Dresses in the 1940s were shorter than they had been in previous decades. Because of the war, fabrics were in short supply. As a result, hemlines got shorter.

In the 1930s, mid-calf length dresses were the norm. However, with WWII causing fabric shortages, dresses in the 1940s came to just below the knee.

Shoulder pads were all the rage in the forties, giving women a more masculine appearance. Dresses in this decade had a variety of necklines, but they didn’t show any cleavage.

When the war ended, and fabric shortages were no longer a concern, skirts got fuller. Patterned fabrics also became more common later in the decade once the war was over, and more options were available. 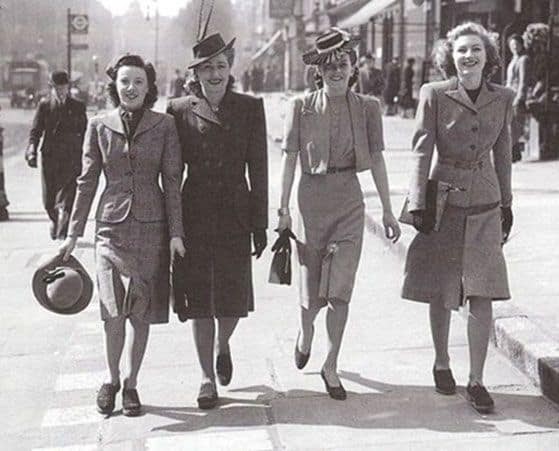 Women’s suits became a staple of 1940s fashion. Some people called them Victory Suits, while others referred to them as Utility Suits. The two-piece suits of the 1940s were all about practicality for the working woman.

In the early 1940s, when fabrics were in short supply, women’s suits featured A-line skirts. Later, after the end of WWII, wasting fabric wasn’t a concern anymore, and pleated skirts became popular with suits.

Women would mix and match suit jackets with their skirts, which meant that their wardrobes could be stretched further despite fabric shortages.

Jackets came to the top of the waist and had a little bit of flair. As with the other clothes women wore in the forties, suit jackets were fitted at the waist to create an hourglass shape. The jackets buttoned down the front and featured shoulder pads.

Blouses were also an important part of suits in the 1940s. Although they weren’t essential, they certainly made suit jackets more comfortable.

Blouses had quite a bit of variety. They could have short or long sleeves and be a solid color or have stripes. V-neck blouses were popular, as were those with a Peter-Pan neckline. 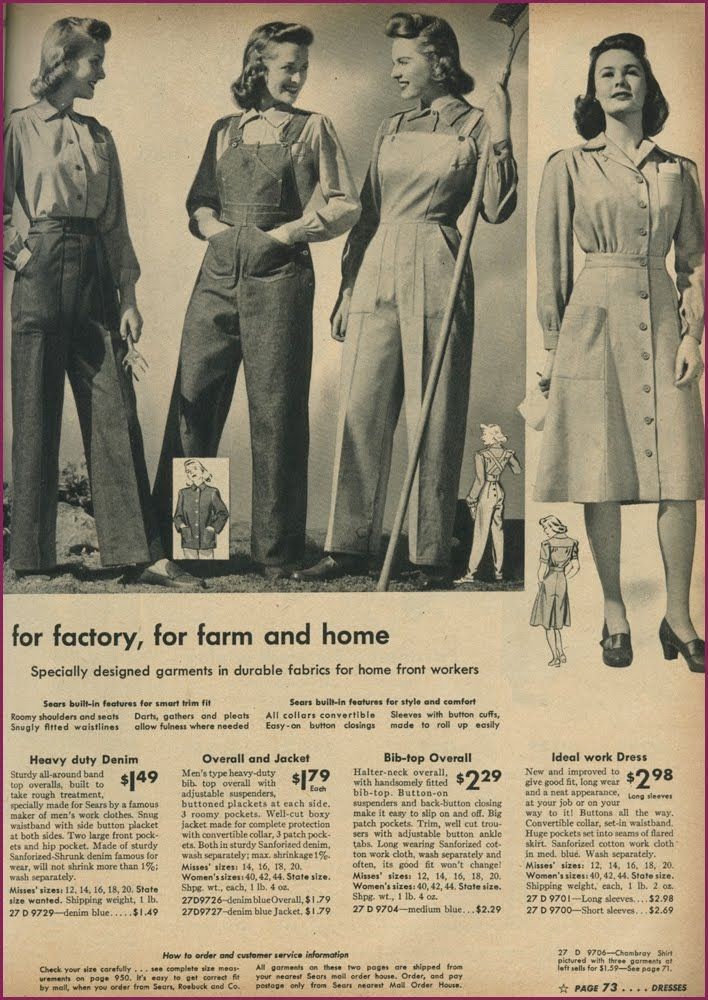 Pants weren’t the only fashion trend that became popular because women started working in factories. Women also started wearing overalls and coveralls in the 1940s.

Heavy denim was the fabric of choice for overalls and coveralls because it was so durable. Rosy the Riveter is the iconic image that captures this moment in history and fashion.

Women would wear a button-down workshirt or blouse under their overalls, which was perfect for the physical labor women were now doing.

Many women also wore housecoats during the forties. These thin work dresses were usually made of cotton, giving them a light and airy feel. 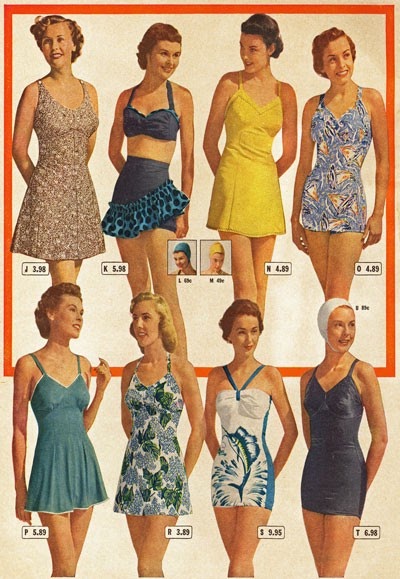 The 1940s gave rise to the very first two-piece swimsuits. However, these weren’t the itty-bitty, teenie-weenie bikinis we are used to today.

Swimsuits of the forties usually had skirts that came to the top of the thigh. For those that had two pieces, the bottoms were high-waisted, and the tops didn’t show much cleavage.

In the early forties, two-piece swimsuits only had a gap of about four inches between the bottom and top. The first true bikini didn’t appear until the mid-forties, but most women were too modest to wear one.

Beachwear also included lightweight dresses that could be worn over a swimsuit when women were hanging out on the beach or around the pool. 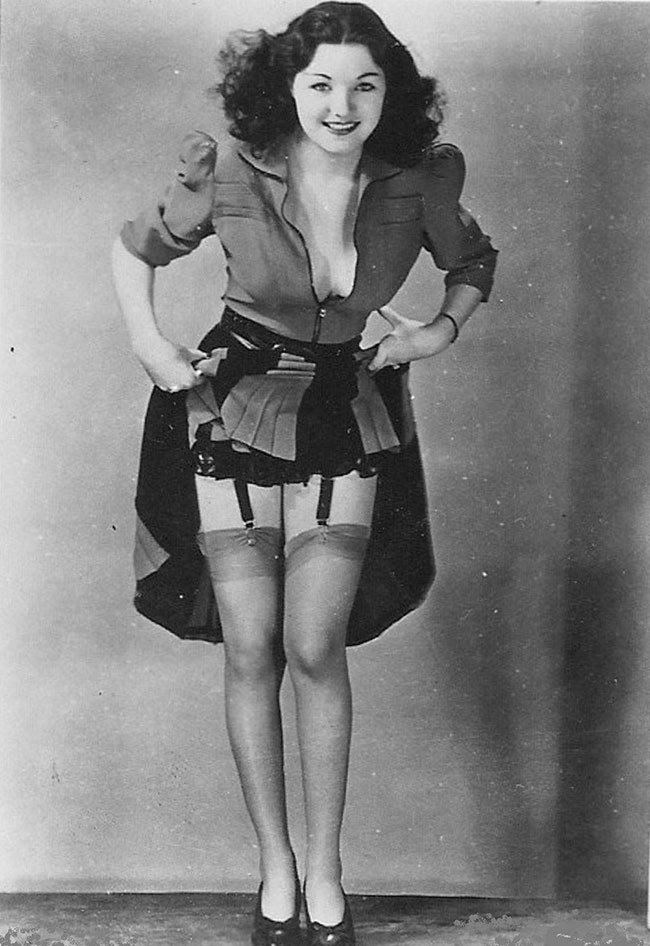 Undergarments were notoriously uncomfortable in the 1940s. Thankfully, we’ve come a long way in lingerie since then.

To achieve the signature hourglass figure that was so popular during the forties, women wore girdles. These girdles fit like granny panties but were much tighter. The front was flat, which smoothed out any lumps and bumps.

Bras were similarly utilitarian. These weren’t the dainty lace bras you find at Victoria Secret. Bras in the 1940s had full-backs and thick elastic straps. But what they lacked in sex-appeal they made up for in function.

Stockings were an important part of a woman’s wardrobe in the forties. With skirts becoming shorter, they helped women feel more covered. However, they only came up to the thigh and required a garter belt to hold them up.

At times, nylon and silk were both scarce during WWII. But many women were so hooked on the look that they painted stockings on.

Pantyhose of this era were known for having a straight line up the back. However, seamless stockings were starting to appear by the late forties. 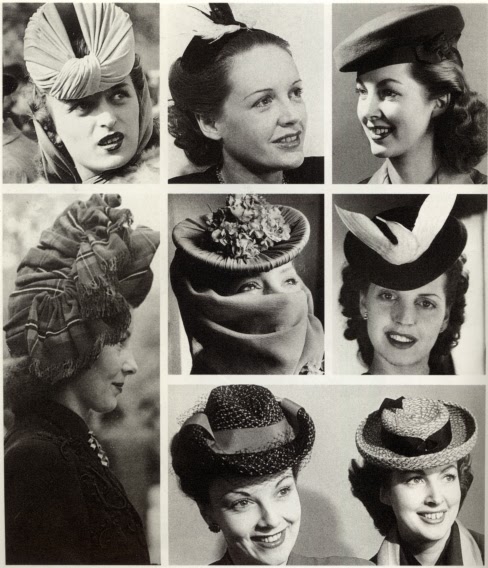 There were many different styles of women’s hats that were popular in the 1940s.

Berets and turbans were both common looks for women to wear during this decade. Often, turbans would be decorated with flowers or jewels

Another style of hat that women wore during the forties featured veils that covered part of the face. Other hats of the decade mimicked men’s styles, such as the fedora.

Snoods also became popular in the 1940s. Long hair was dangerous in factories in the same way that long, flowing skirts were. Women would wrap their hair in a loose piece of fabric and tie it back to hold it out of the way.

As you can see, WWII changed not only the course of history but also the trajectory of women’s fashion. Putting women in the workplace had a direct impact on what styles were popular.

Despite the functionality of women’s clothing in the 1940s, ladies of the day managed to hold on to their feminity. Even with masculine touches such as shoulder pads, the hourglass figure prevailed.

All these decades later, trends that first became popular in the forties can still be found in fashion today. What classic look from this decade do you still love? Share this article with your friends and find out what they think.

What Were The Most Popular Hairstyles Of The 1940s?
All About 40s Fashion: How To Recreate A 1940s Look