The 1960s were a time of great change on many fronts. Not surprisingly, women’s fashion underwent a revolution as well.

In the fifties, women were still resigned to modesty. But by the end of the sixties, they were letting it all hang out. There was no such thing as a skirt that was short.

Let’s take a look at how women’s fashion evolved throughout the 1960s.

Most Popular Styles for Women in the 1960s

Naturally, styles from the fifties were still popular in the early 1960s. Jackie Kennedy was the fashion icon of the day. 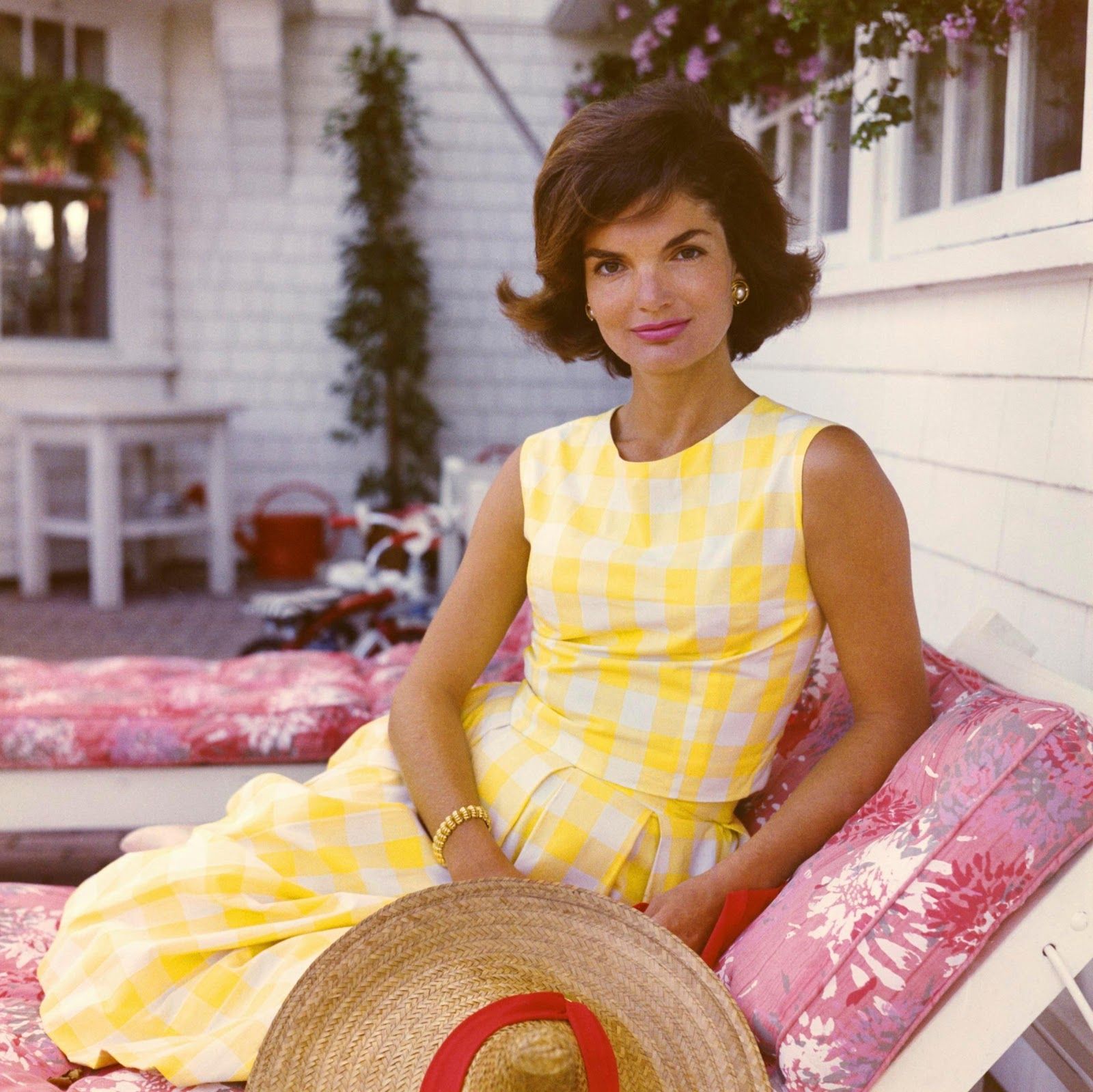 As the wife of President John F. Kennedy, she was always in the public eye and the people adored her.

Whether she was wearing an evening gown or spending the day outside playing with her children, Jackie’s look was always polished and elegant.

Following the assassination of her husband, Jackie appeared in public less than she did as First Lady.

Several other fashion icons emerged to fill the void she left. But no one had the impact that Jackie did. Her influence can still be seen in the styles of today. 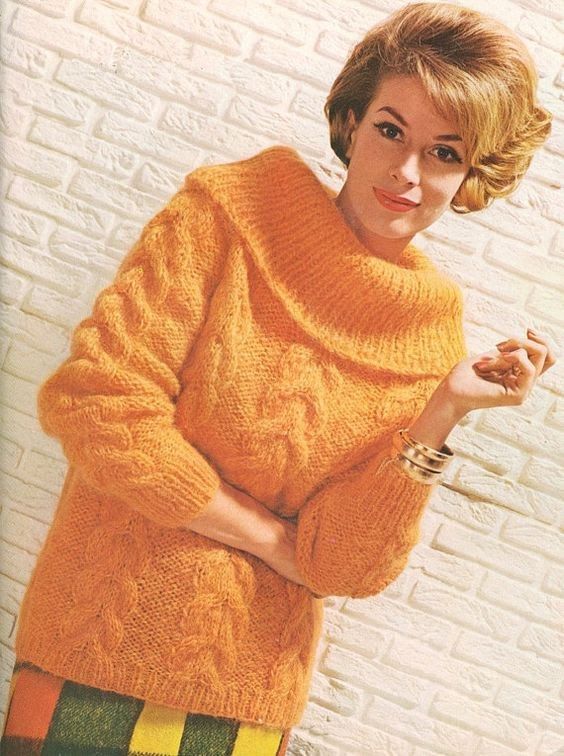 Women wore plenty of sweaters in the sixties. Both cardigans and knitted sweaters were popular.

Knitted sweaters often featured thick cables and ribs. The texture was the main feature of this style and they were usually a solid color. 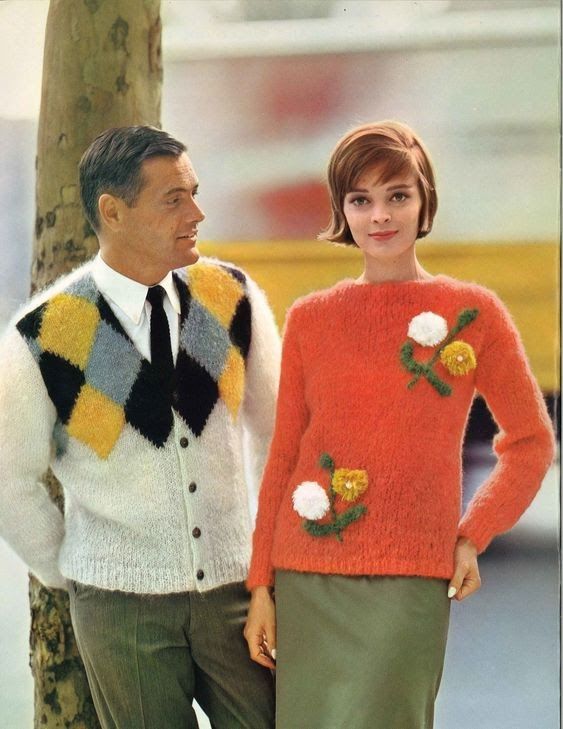 Cardigans, on the other hand, often sported various prints, such as florals or the ever-popular argyle sweater.

Another difference between these two styles was that while knitted sweaters tended to have oversized collars, cardigan sweaters usually lacked this feature.

Thin, sleeveless sweaters became popular in the sixties as well. Made for summer weather, they often had mock turtlenecks and came down around the hips. 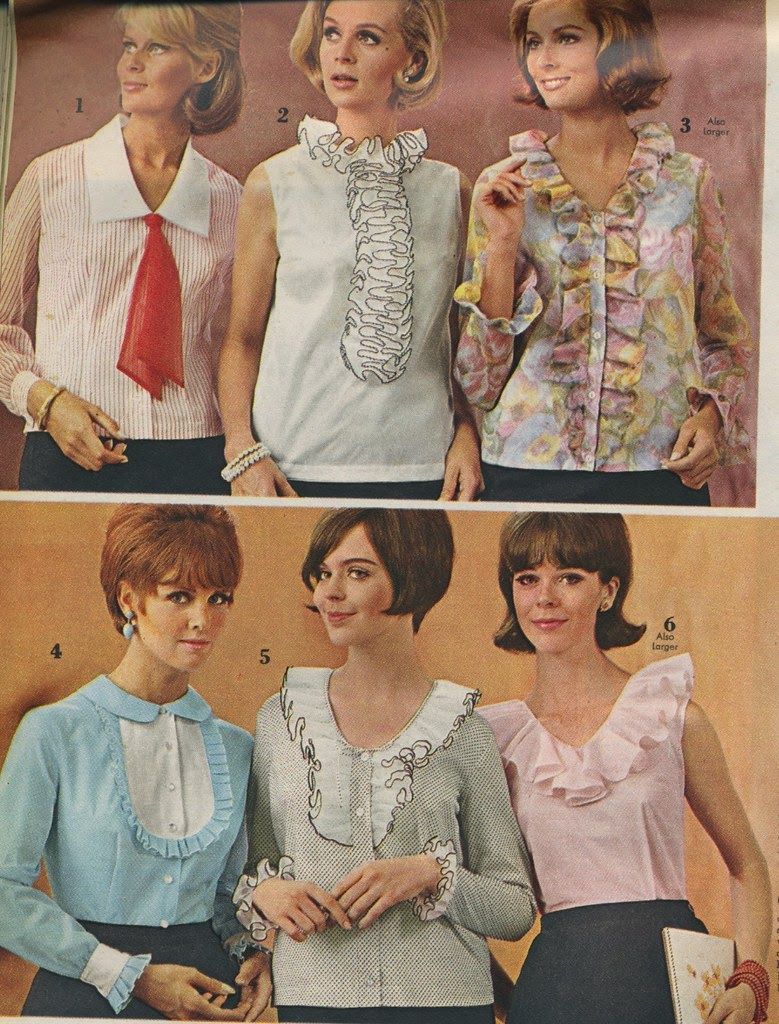 Like sweaters, the most popular styles of blouses in the 1960s were similar to those of the previous decade.

The big change was that it was acceptable to leave blouses untucked in the sixties. They often came down past the waistline and hung over the hips. As the years passed, shirts got longer and longer.

Unlike the skirts of this era, blouses were usually modest. High necklines and turtlenecks were the norms during this decade. Ruffles covering the bosom were also popular.

Blouses of the sixties had a boxy look and fit almost like men’s shirts. However, they usually had bright colors and sometimes had patterns, such as florals or bold stripes. 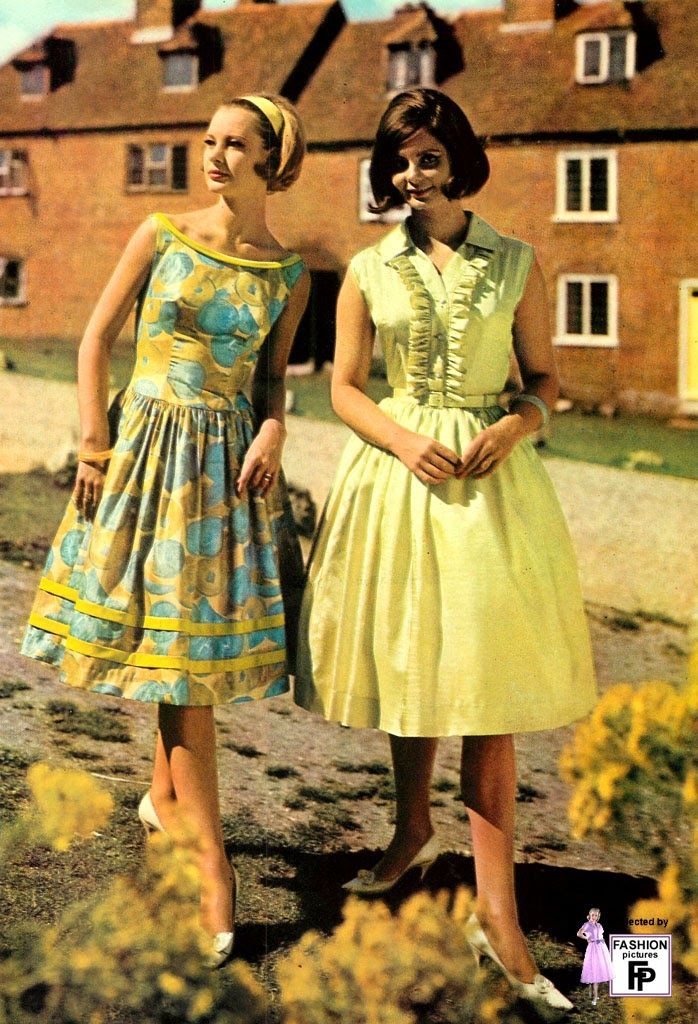 Dresses were a staple of every woman’s wardrobe in the 1960s and there were a variety of dress styles that women wore during this decade.

Swing dresses, which were all the rage in the fifties, were still popular in the early sixties. These dresses were form-fitting at the top but had a full skirt on the bottom.

Women were still wearing swing dresses in the seventies. However, the fullness of the skirt decreased with the years. 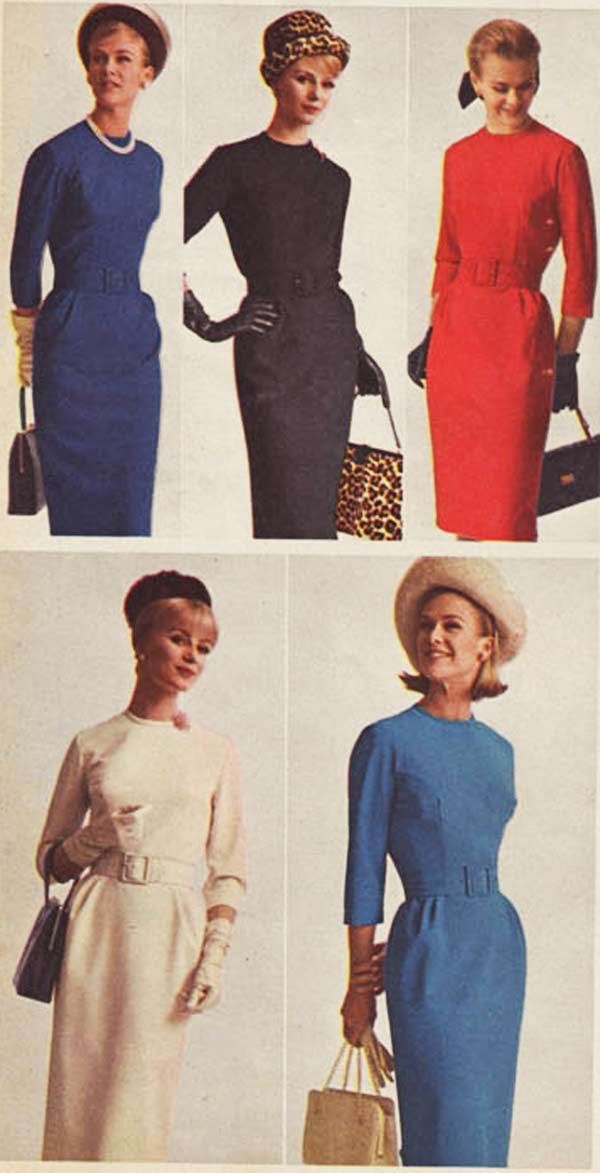 Contoured sheath dresses also became popular during the 1960s. These dresses were quite tight and were perfect for showing off a woman’s curves.

The hemline was below the knee, usually mid-calf length. This elegant style also featured a high neckline. 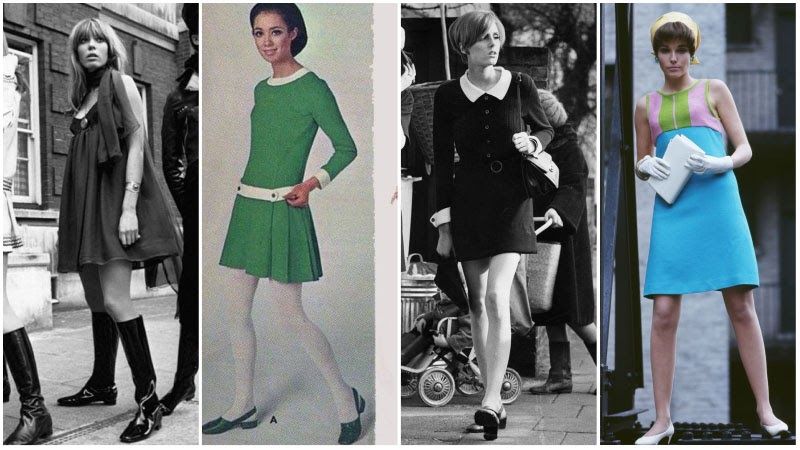 As the decade went on, hemlines got progressively shorter. Babydoll dresses, which gave women a childlike appearance due to their overall style, were loose-fitting but featured very short skirts.

Shift dresses didn’t have the defining shape of the other dresses from this decade, but they were very comfortable, which made them a popular choice.

Skimmer dresses were very similar to shift dresses, but the skirts were much shorter than their more conservative cousin. 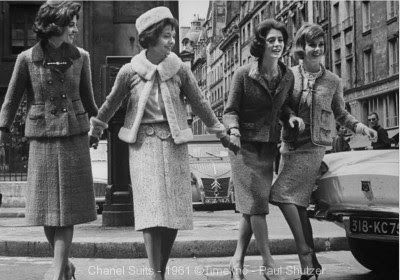 Women’s suits in the 1960s consisted of a skirt and jacket that could be worn with or without a blouse underneath.

Thanks to the influence of women like Jackie Kennedy, suits in the sixties were quite elegant. The pencil skirts came slightly below the knee and cropped jackets completed this classic look. 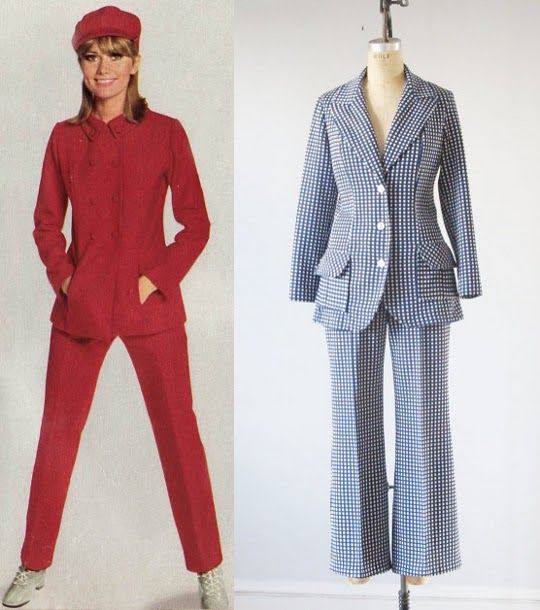 In the middle of the decade, the first pantsuits for women began to hit the market. The cut of the first women’s suits was similar to that of traditional men’s suits.

Many workplaces refused to allow women to wear them, requiring skirts instead. But that didn’t stop women from buying them and eventually making them a standard. 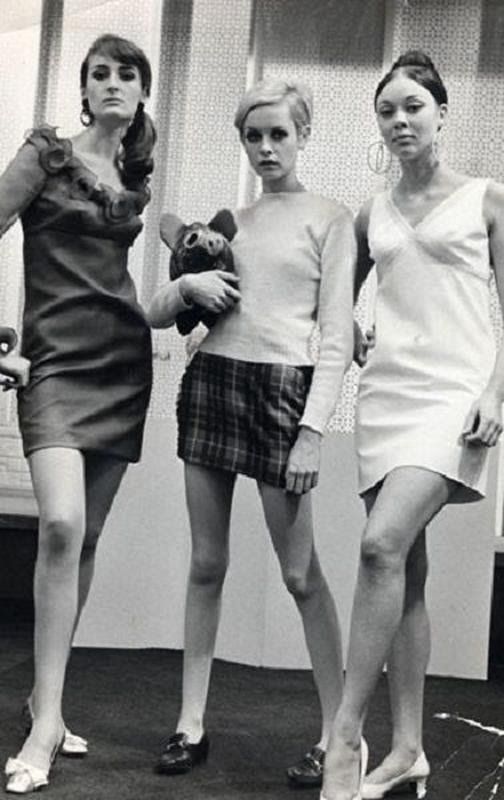 As mentioned earlier, skirts in the sixties got shorter -- much shorter. The mini skirt made its debut during the 1960s.

Women used these short skirts as a way to declare their own confidence. Short skirts became a sign of women’s liberation. Although society found the mini skirt downright shocking, the style took off and fashion would be forever changed.

But not all women wore their skirts quite that short. Pencil skirts and A-line skirts that came just above or below the knee were still popular.

The maxi skirt, which was a full-length skirt that came to the ankles, also became a popular style in the sixties, especially with older women. 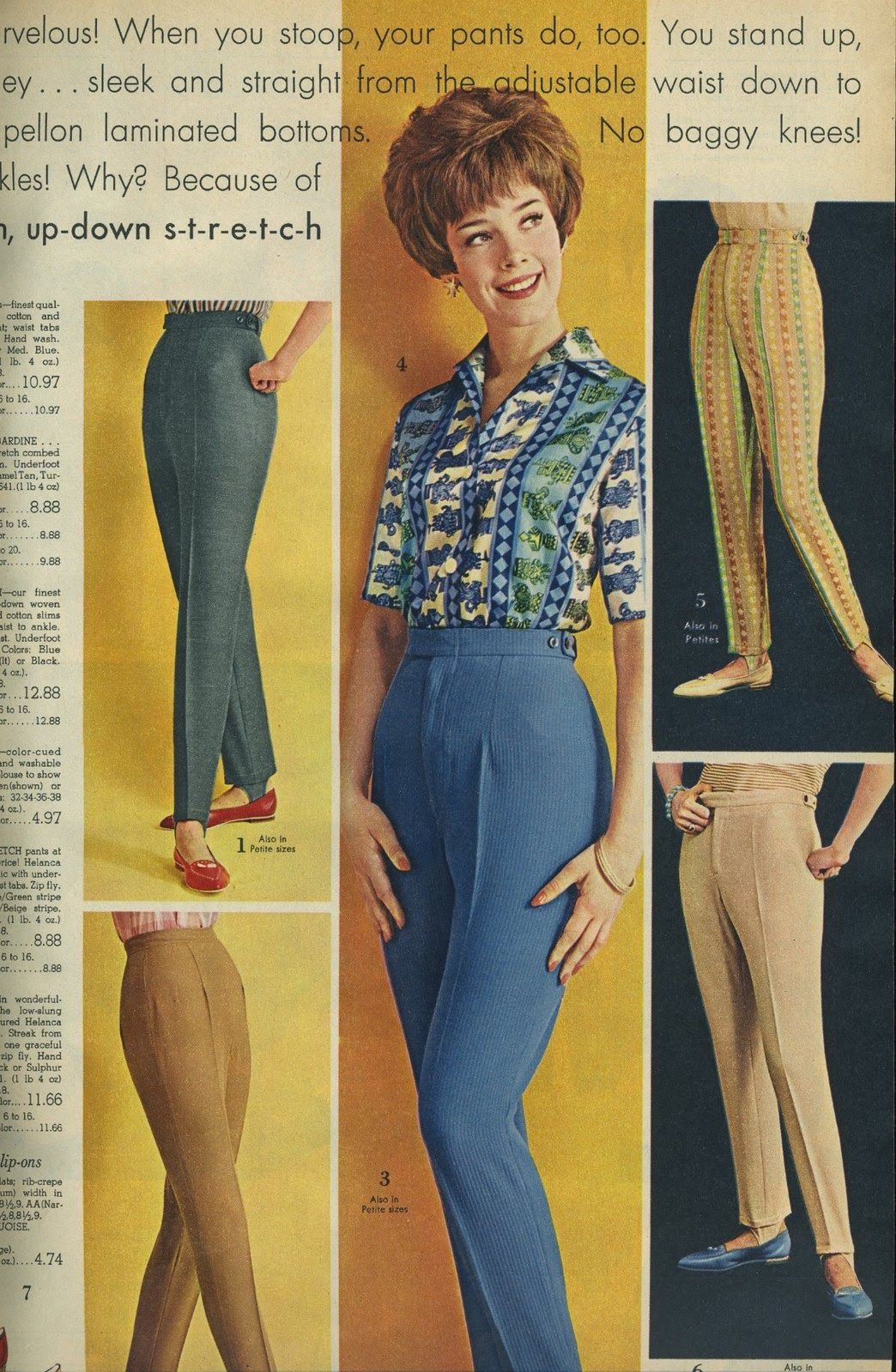 Not surprisingly, women’s pants in the early 1960s were similar to those of the 1950s. They had a high waist and were fitted around the hips with a tapered leg.

Stretch pants and stirrup pants first became popular in the sixties. They were an instant hit because they were so comfortable to wear. 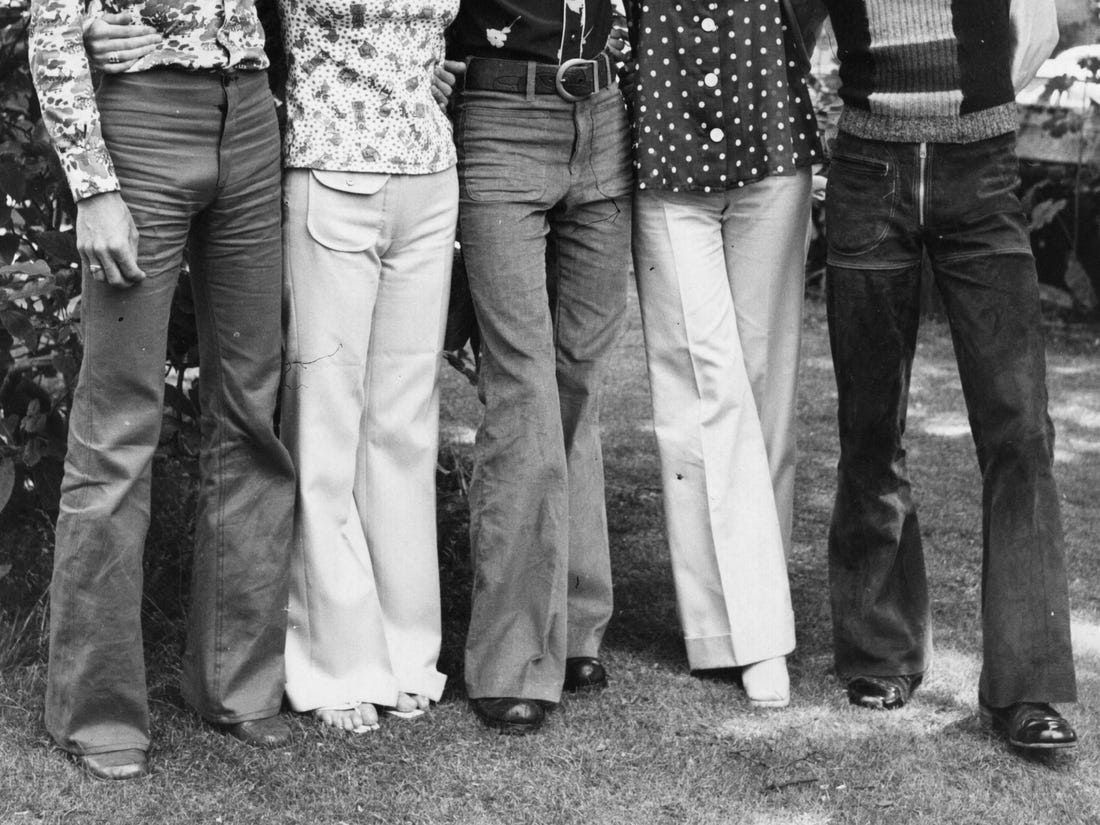 However, the most iconic look from this decade is undoubtedly bell-bottom pants. This look was form-fitting at the hips and thighs, then widened throughout the lower leg into a full bell at the bottom. 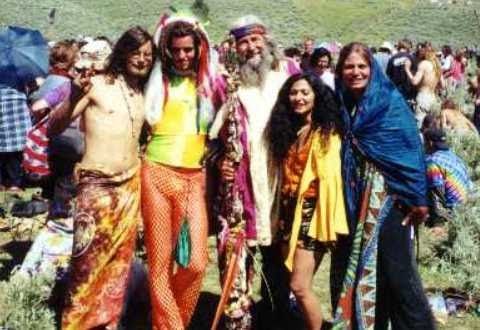 And that leads us into the defining trend of the 1960s: the hippie style.

The sixties were an age of change. Revolution was the word on everyone’s lips. It was out of this environment that hippies were born.

This style was all about freedom. The look of the flower child featured bright colors and a wide range of accessories such as scarves, fringe, headbands, and elaborate embroidery.

Women’s Clothing in the Swinging 60s 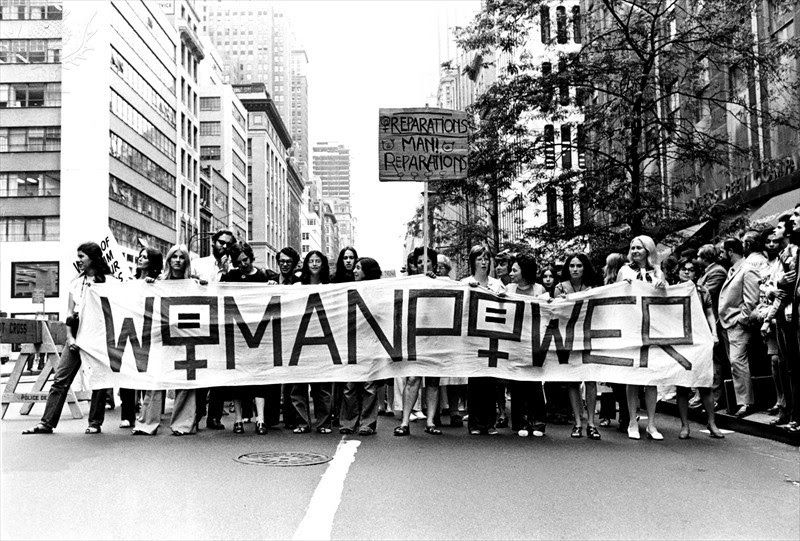 The 1960s saw a lot of change in every area of society, and women’s fashion was no exception.

From mini-skirts to pantsuits to hippies, women’s fashion would never be quite the same again.

Women’s liberation changed not only their place in society but also how they saw themselves. Naturally, this carried over into the clothing women chose to wear.

What fashion trend from the sixties do you love the most? Share this article with your friends and see which look is their favorite.

What Was Men's Fashion Like In The 1960s?
1960s Fashion Trends: How To Recreate A 1960s Look
Retro Jewelry And Accessories: Most Popular Looks For The 1960s
Fashion From Decades Past: Updated 60s Style