The 1960s were a time of great change. This decade changed the world in many ways, including fashion. But it wasn’t just women’s fashion that was revolutionized in the 60s. Men’s fashion got an overhaul as well.

What Were the Most Popular Styles for Men in the 1960s?

When you think of men’s fashion in the 1960s, you probably think of bell-bottoms and tie-dye shirts. And yes, you could absolutely find plenty of these throughout the decade that featured the Summer of Love.

But this dynamic decade had much more to offer than just hippie cliches and memories of Woodstock.

So, just what were the popular styles of the day? From the single-breasted suits of businessmen to the black turtlenecks of the beatniks, men’s fashion in the 60s had something for everyone.

Let’s take a quick trip back in time and have a closer look at men’s fashion in the 1960s. 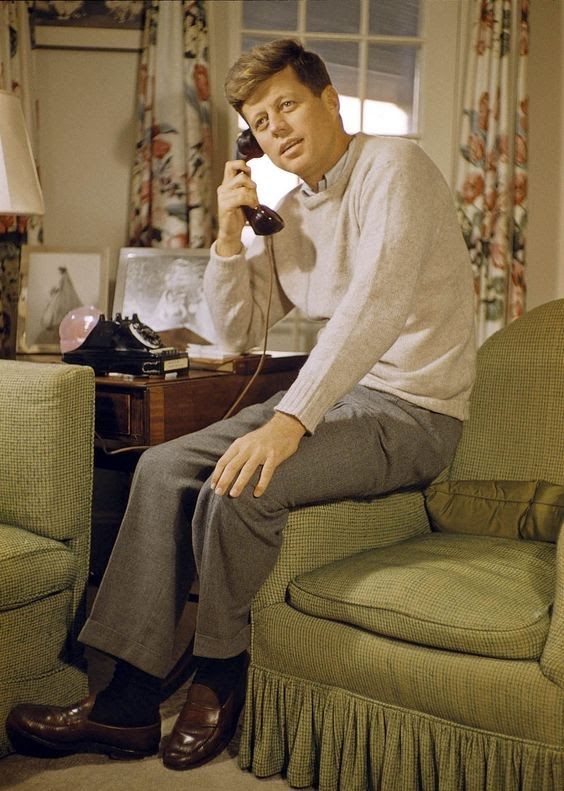 If you could describe the style of the 1950s in one word, that word would be “conservative.” Therefore, it should come as no surprise that fashion in the early 1960s was still fairly reserved.

Pullover sweaters were a popular look for men of the day. Also known as the Ivy League style, this was the trademark look of President John F. Kennedy, especially in his younger days.

Button and zip cardigans were also popular options in the 1960s, as were V-neck sweaters. Colors during this time were often bold and there were lots of patterns to choose from.

The varsity stripe sweaters of the 1950s were still popular in the early 60s. And the classic cable knit sweater was in style during this decade as well. You could find any of these sweaters being worn with chinos and a pair of loafers.

As with the Ivy League look that reigned supreme with younger men in the early 60s, business attire for men was still very conservative at the beginning of the decade.

For a glimpse of the popular styles that men were wearing in the business world, take a look at the television series Mad Men. Jon Hamm’s character, Don Draper, is a perfect example of what a well-dressed man would have worn in the sixties.

Men still wore three-piece suits featuring a fitted vest in this era. Hats, such as a fedora, were also part of this classy look.

A pair of black Oxford shoes polished to perfection was the icing on the cake for this style. And a full-length trench coat was the finishing touch in colder weather. 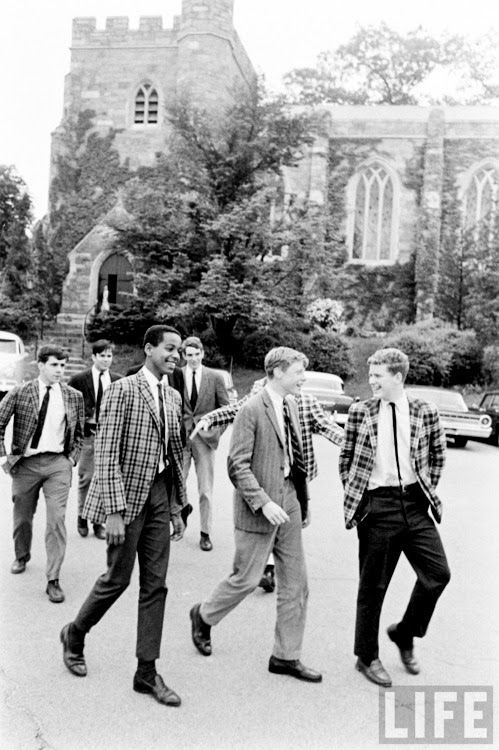 Preppy dressers were in their glory during the 1960s. But this look was much more than just varsity sweaters and penny loafers.

During the 1960s, a popular look was the plaid blazer. Preppy men paired this unique style of a blazer with a white dress shirt, a tie, trousers, and of course, those beloved loafers.

Another preppy look that has stood the test of time is a polo shirt with a cardigan sweater tied around the shoulders. For more casual occasions, a short-sleeved dress shirt with khaki pants and those versatile loafers were popular.

The Kennedy family gets the credit for making the preppy look part of mainstream fashion in the sixties. They were the fashion icons of the day and their preppy style quickly became the look everyone wanted. 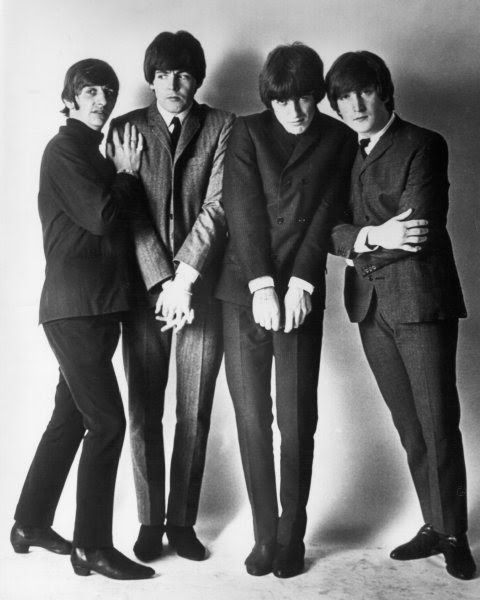 Eventually, times began to change and the ultra-conservative styles of the 1950s began to evolve. Mods, which was short for Modernists, took fashion in a new direction.

The Mod style began in Britain before becoming popular across the pond in the United States. For an example of this style, you don’t need to look any further than the fashion choices of the early Beatles.

Slim-fitting suits and narrow, tailored pants were part of this look. These suits could be paired with dress shirts or turtlenecks. Plaid shirts and penny loafers are popular mod styles as well. Argyle socks are a nice touch too. And don’t forget the dark sunglasses.

When the Beatles first took the world by storm in their early days, many people were aghast at their Mod style hair. They couldn’t believe that men were wearing their hair that long. But this was just a taste of things to come.

Hippie and Beatnik Styles for Men 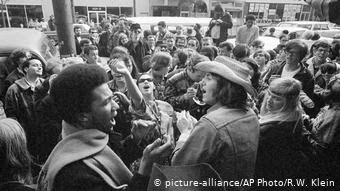 As the decade continued, fashion took a turn no one would have expected just a few years earlier.

As Americans faced increasing unrest during the Vietnam War and the Civil Rights Movement, young people became fed up with the conservative rules of society their parents had grown up with.

This dissatisfaction with societal norms was obvious in the music of the times, the protests that took over the streets, and even the clothes that the younger generation chose to wear.

Enter the hippie and beatnik scenes. 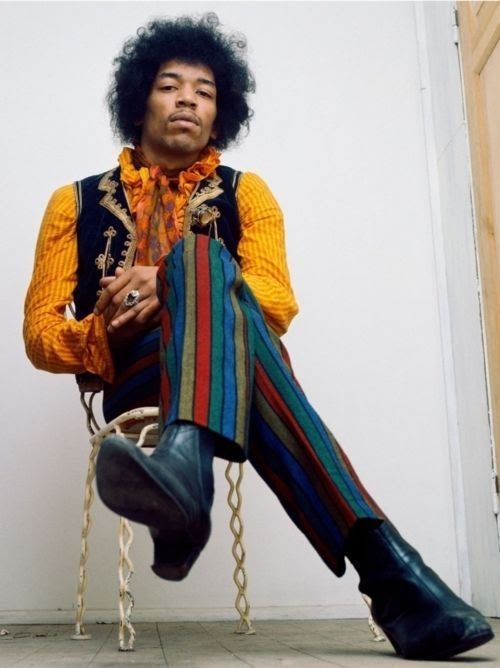 When it comes to the 1960s, hippie styles are definitely the most memorable. This look was all about having fun and loving life.

Bright colors, a multitude of patterns, and flamboyant accessories made this a look that still stands out even half a century later. Wide bell-bottoms and lots of frills added to the allure of the hippie style.

Although many men wore these classic hippie looks during the sixties, Jimi Hendrix was always known for making a fashion statement.

The hippies also made it acceptable for men to have long hair, something that was unthinkable in the 1950s. 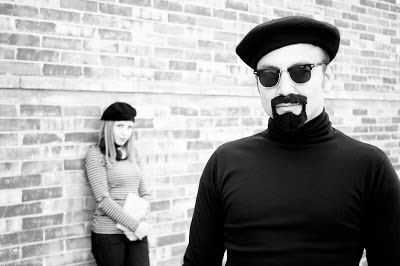 Hippies and beatniks often get lumped into the same category but they are almost polar opposites.

While hippies were listening to the rock n’ roll guitars of Jimi Hendrix and folk musicians like Bob Dylan, beatniks were indulging in the music of jazz legends such as Miles Davis.

Their fashion choices were very different as well. Hippies are all about color. But beatniks prefer black or maybe a few black and white stripes rather than bold patterns.

The trademark look of a beatnik is a plain black turtleneck. As far as accessories go, beatnik style favors dark sunglasses and berets.

In addition to jazz, beatniks also enjoyed art and poetry. Jack Kerouac, the legendary author, is one of the most famous beatniks in history.

The 60s were a turning point for the world in a long list of ways. Fashion was definitely never the same again.

Men’s fashion in the 1960s really spanned the gamut. From three-piece suits to bell-bottoms, every man was able to make the fashion statement that fit him best.

When looking back, it is easy to see how the styles of this decade still have an impact on the fashion world more than 50 years later.

What 1960s look do you incorporate into your daily wardrobe? Let us know!