Top Fashion Styles From the 90s

As fashion editors and bloggers have been declaring for a few months now, the ‘90s are back, baby! Grunge style, in particular, is ultra-popular with hipsters and fans of alternative fashion these days, but many ‘90s staples have found their way into the mainstream.

As we jump into our time machine and look back at ‘90s fashion, the only clue that the photos weren’t taken yesterday is the picture quality since hipsters the world over are now copying the silhouettes that were so popular in that decade. So without further ado, our favorite styles from the 90s: 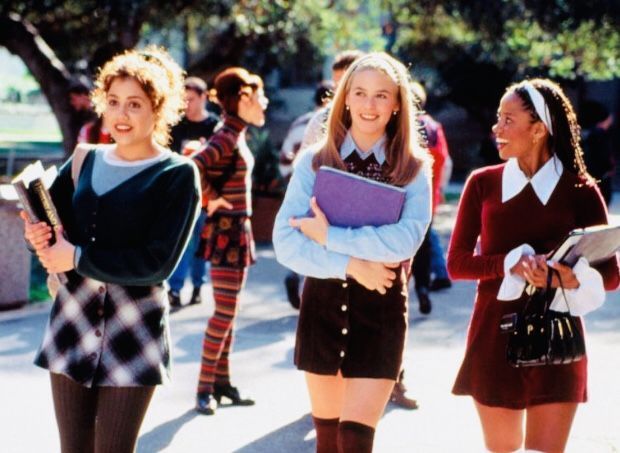 The 1995 film Clueless gives instant 90s nostalgia, and it’s also known for the iconic styling of the fashionista lead played by Alicia Silverstone. However, most of the looks in the film probably wouldn’t have been worn by the average teen.

This scene is probably as close as it gets, with A-line skirts, corduroy, and daring knee-high socks as the go-to look for preppy girls, but with Brittany Murphy’s character giving a nod to grunge with a plaid skirt. 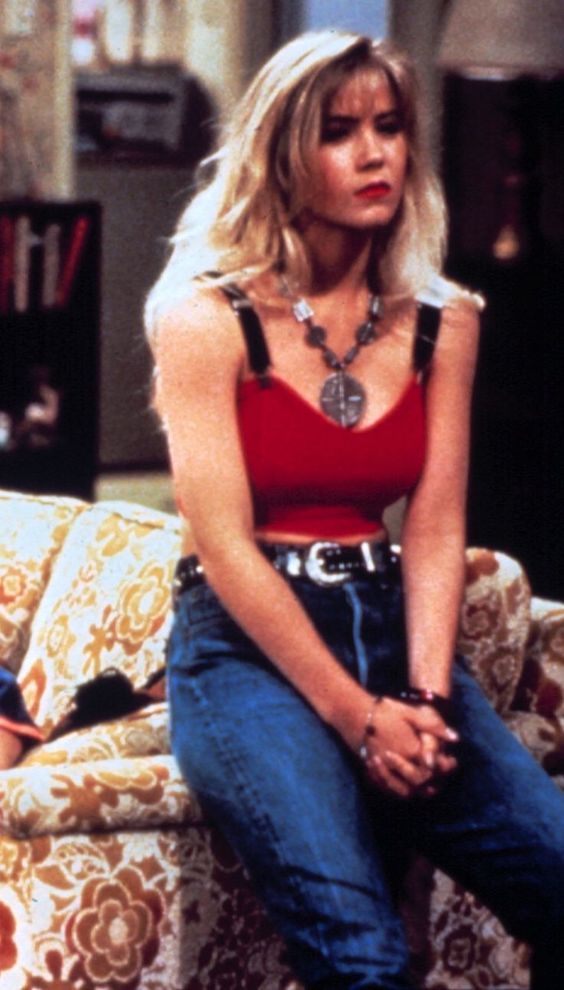 Not every look on this list will fit in with the 90s resurgence we’re seeing right now, but this Christina Applegate look from the show Married With Children does to a T. The high-waisted jeans are extremely fashionable, and they make wearing a crop-top feel a lot less revealing.

The big necklace and black belt give this look a subtle punk touch, which was not out of line for the 90s bad girls. As the show progressed, this character started favoring more revealing ensembles, including mini-skirts and short shorts. 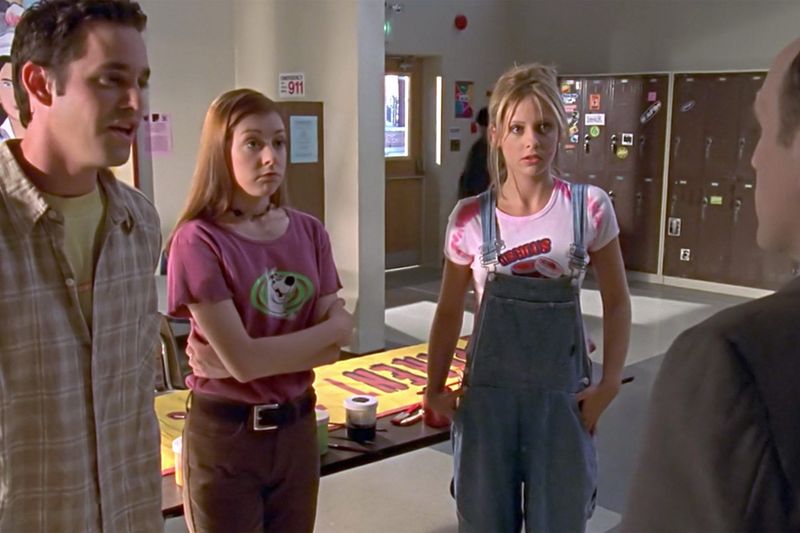 It’s not clear how an industrial, protective garment became part of mainstream women’s fashion in the 90s, but it did. Overalls were a great casual garment that was most popular with the mainstream, though R&B and hip hop acts also made it part of their look.

In this still from Buffy the Vampire Slayer, Sarah Michelle Gellar is wearing a pair along with a tie-dye T-shirt, which was a 60s print that became trendy again in the 90s, proving how cyclical fashion can be. 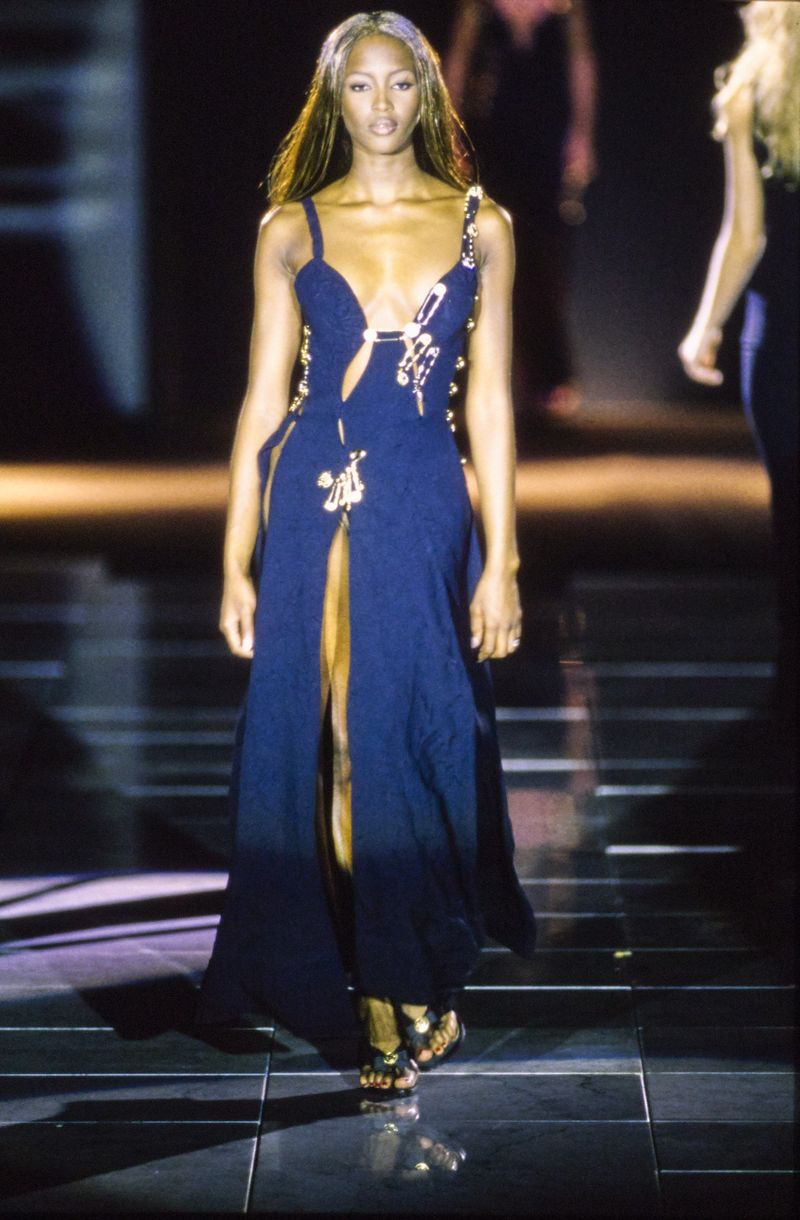 The 90s catapulted many models into becoming major celebrities, including Naomi Campbell pictured here. Just as iconic as the supermodel is this particular Versace dress – it illustrates how fashion designers pushed the envelope in the 90s, both when it came to construction as well as exactly how much skin could be revealed.

Another safety pin dress from the same collection would later be worn on the red carpet by Elizabeth Hurley, a moment iconic enough to merit its own Wikipedia entry. 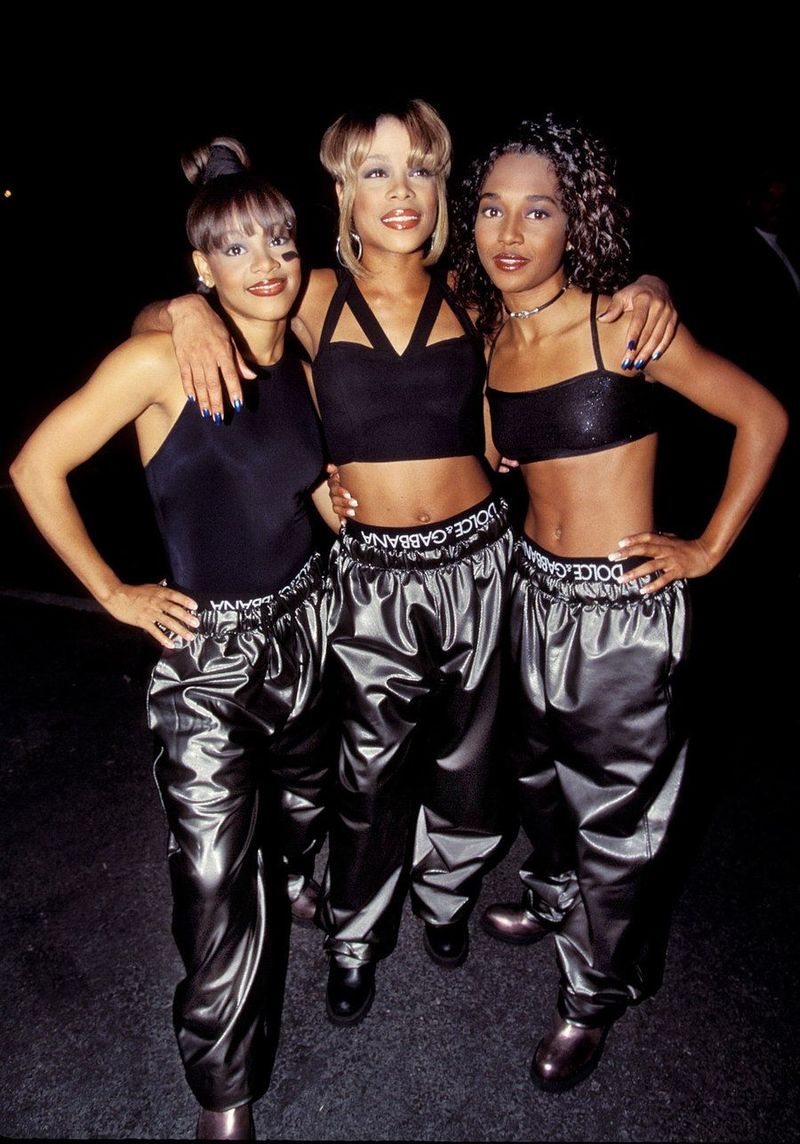 More so than any other style of the 90s, hip hop fashion (which we would call street style nowadays) retained a lot of 80s staples, including athletic wear and shiny or colorful fabrics. TLC’s signature look was consistent, with baggy trousers, crop tops, and the daringly androgynous touch of visible boxer bands.

This look didn’t change much too much going into the 2000s, beyond the rise of the pants getting a little lower. 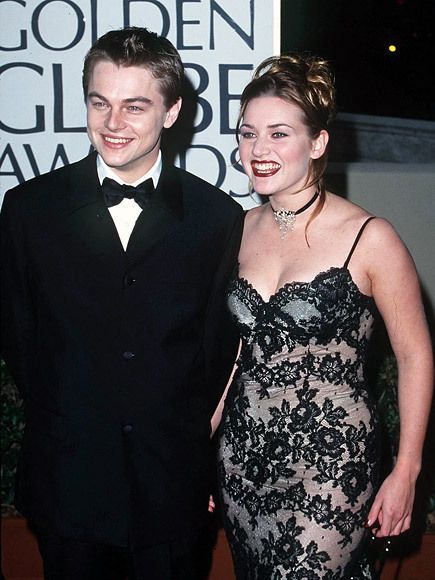 Sometimes the red carpet is the best representation of what was considered the most glamorous, which in the 90s meant spaghetti strap evening dresses and messy updos. Kate Winslet was the hottest up-and-coming startlet at the time, and she picked to style her look for the Titanic premiere with a choker and dark red lips, which lent her outfit a dark, edgy touch. 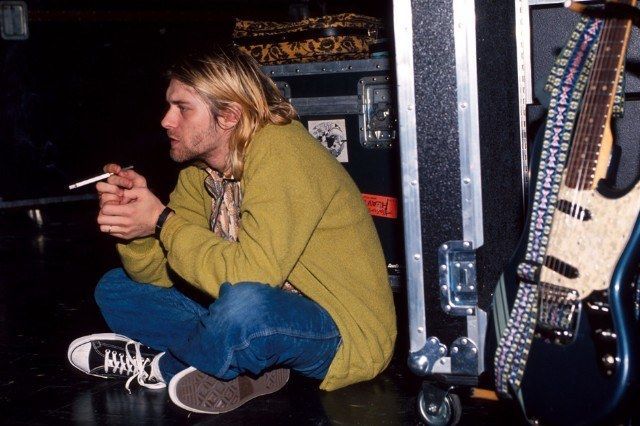 For the alt crowd, grunge is probably the most memorable style to come out of the 90s. The cozy and purposefully understated look was especially popularized by Kurt Cobain, though there was no shortage of grunge bands throughout that decade. The staples for grunge were big cozy sweaters or cardigans with a very distressed finish, but the occasional oddball combinations were also integral to the style. Converse Low Tops, as well as other sneakers, were popular across subcultures, however! 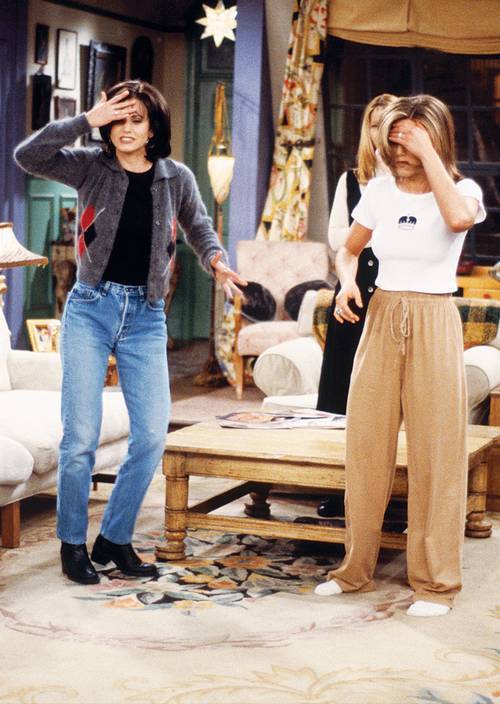 When it comes to 90s television, I prefer shows like Buffy, but the status of Friends as THE 90s tv show is hard to deny, and the fashion portrayed on the show is a great representation of normie style. In this still, Courtney Cox is rocking the standard bootcut jeans that just about anyone would have had in their closet, while the cropped T and loose trousers on Jennifer Aniston are a bit more out there for loungewear. 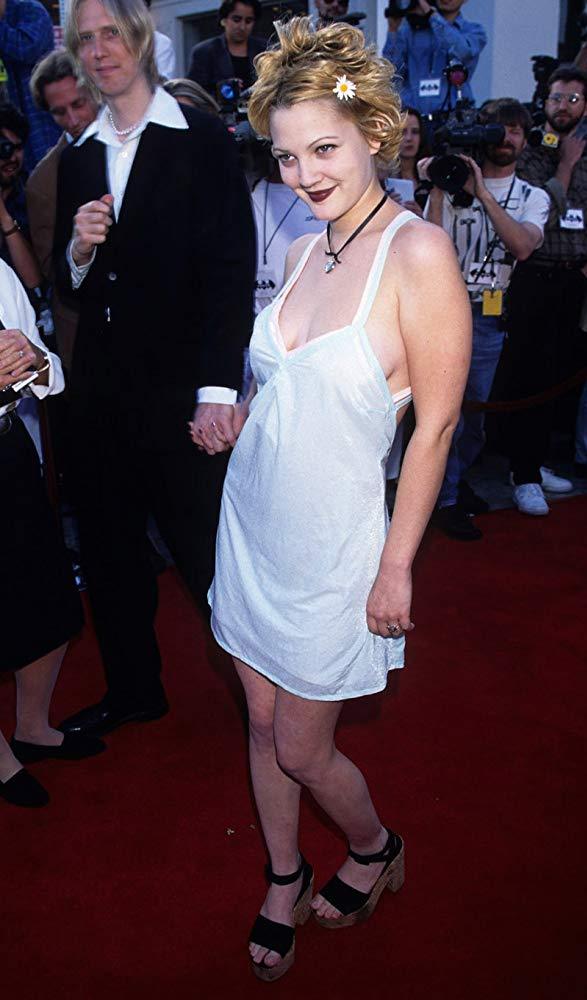 When we think of Drew Barrymore today it’s easy to forget that she was once a 90s rebel girl. This look is what we would call glam grunge, as evidenced by the slip worn as a dress to the red carpet - a daring style choice. Barrymore paired the white dress with strappy black platforms and dark makeup just to drive home the fact that this was not a “demure” look by any stretch. 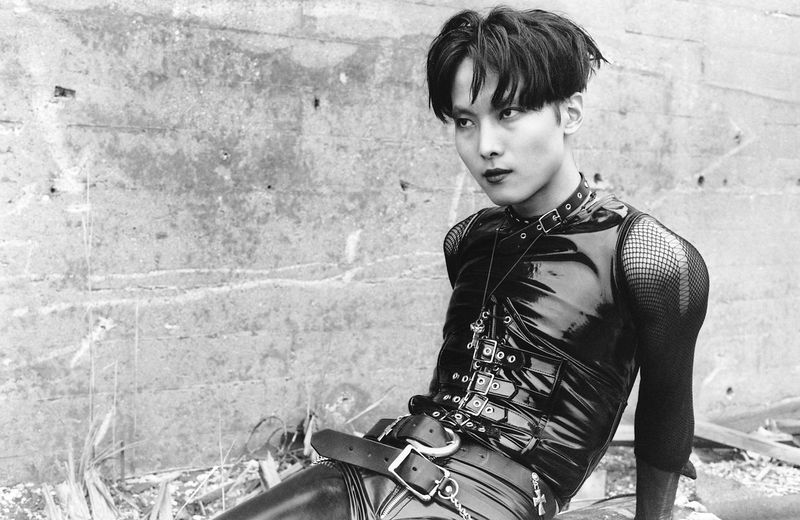 The modern goth subculture had its start in the early 80s, but it continued into the 90s primarily as an underground movement. The goth look in the 90s was very much influenced by more mainstream looks, with tight leather pants, chokers, and middle-parted hair.

But with that said, some elements of goth are timeless, like the big black boots, spikes, and fishnets. It’d be easy to mistake this photo for something recent, but it was actually taken in 1996! 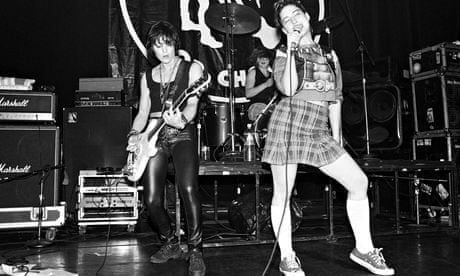 Riot Grrrl was an attitude more than it was a look - satirical, rebellious, and unashamedly feminist. The skirt and high socks that Kathleen Hanna is wearing in this photo could have been worn by a character in Clueless, though the low-top sneakers and cropped T give this look its bad girl touches. Special shoutout to Joan Jett in this photo for showing us how to work a pair of leather pants like it’s 1994.

Which 90s styles do you love, and which are you dreading having a comeback? Sound-off on Facebook to let us know!