Soft grunge, also known as “pastel grunge,” stems from the original grunge movement in the early 1990s. With noticeable gothic and kawaii influences, the “cute” and deliberate soft grunge styles started to gain popularity in 2010, on social media. 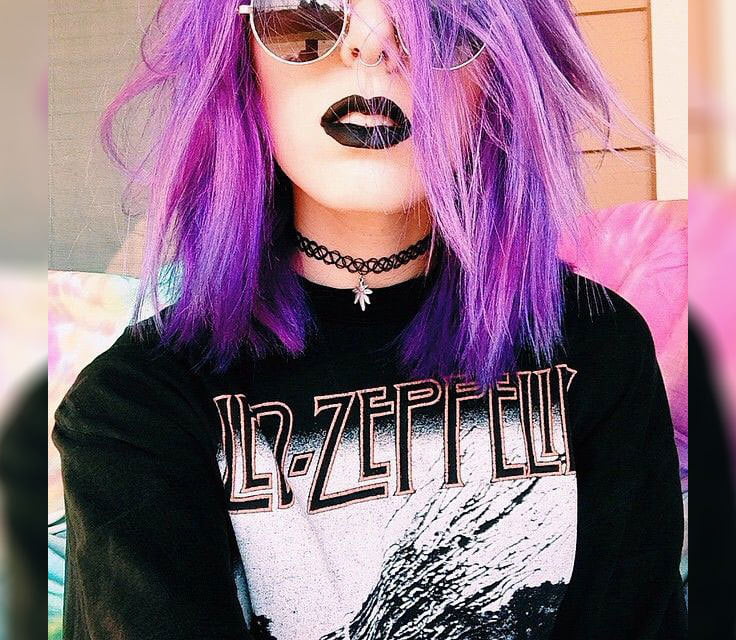 And while the underlying sense of poetic sadness and isolation of early 90s grunge has carried over to millennial soft grunge chicks (the dominating sex of this subculture), there is a bit of irony in the relationship between the two.

Grunge was never about being pretty or being liked. It was about finding solace in one’s loneliness through the words and riffs from “anti-rock star” bands like Nirvana, Smashing Pumpkins, Soundgarden, and Pearl Jam. So considering that 90s grunge was more of a masculine world (very different from the riot grrrl movement that was also at a height during that period), the girls who loved grunge were about maintaining that sense of edge and rebelliousness in the least pretentious clothing as possible. Think over-sized flannels borrowed from dad or brother’s closet, typically worn around the waist or over a baby doll dress from the thrift store. The concept of dressing “grunge” was very hippie-esque, as it was about using fashion to show what your view on the world. It was not about perfection. 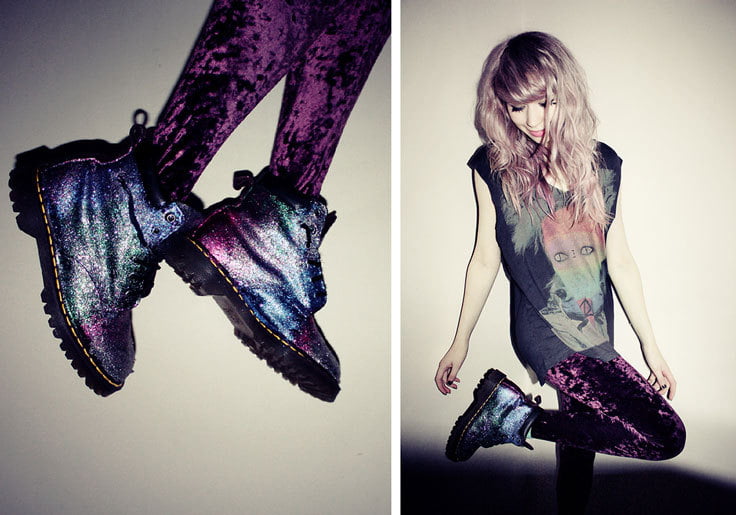 So what about the soft grunge girls of today who epitomize edge and rebelliousness with septum piercings, pastel-colored hair, and metallic combat boots? Many are, in fact, top YouTubers and fashion bloggers who give tips on how to attain their look. But instead of poking fun at, or even showing judgment to the soft grunge goddesses of today, let’s keep in mind that it’s all rock and roll! When you’ve created a look that is linked to a certain culture or subculture, sometimes one can get caught up trying to look like the next. But we know the value of maintaining a sense of individuality in a sea of sameness. So in our age of superficiality as well as artistic expression, soft grunge looks to be more than just a trend.

Here are some must-have fashion items that can add to your soft grunge vibe: 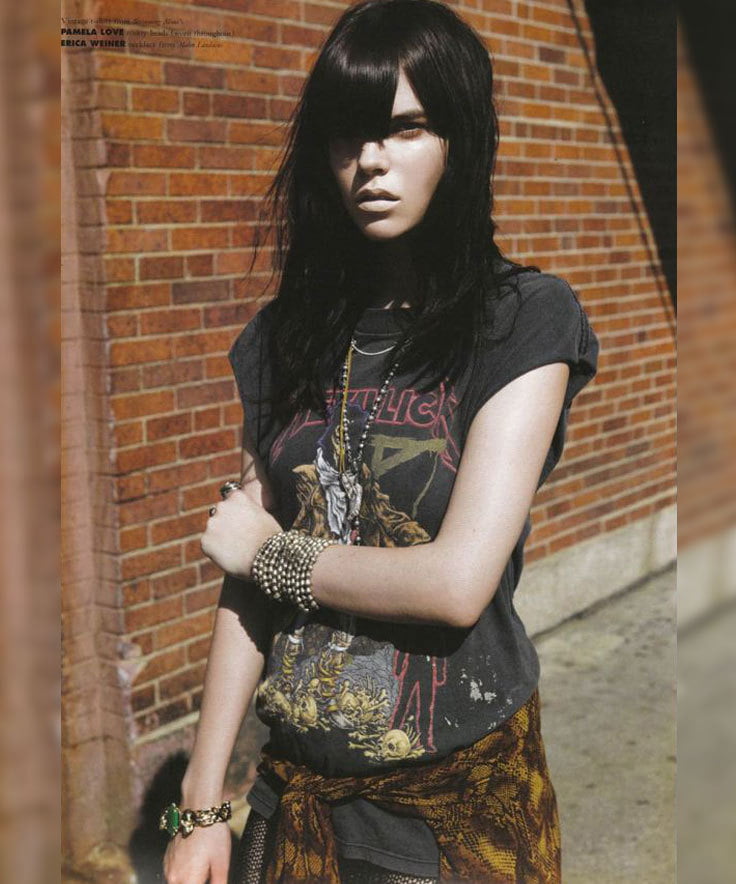 The band tee is a total must-have! It’s one of the easiest and coolest ways to show your allegiance to the world of rock, in particular your favorite grunge bands. It’s a great layering piece that can be worn under a blazer, plaid button-up, or leather moto jacket on a chilly day. It can also be worn solo with a pair of black leggings and creepers for a simple goth-grunge appeal. And with both options…the more jewelry, the better! 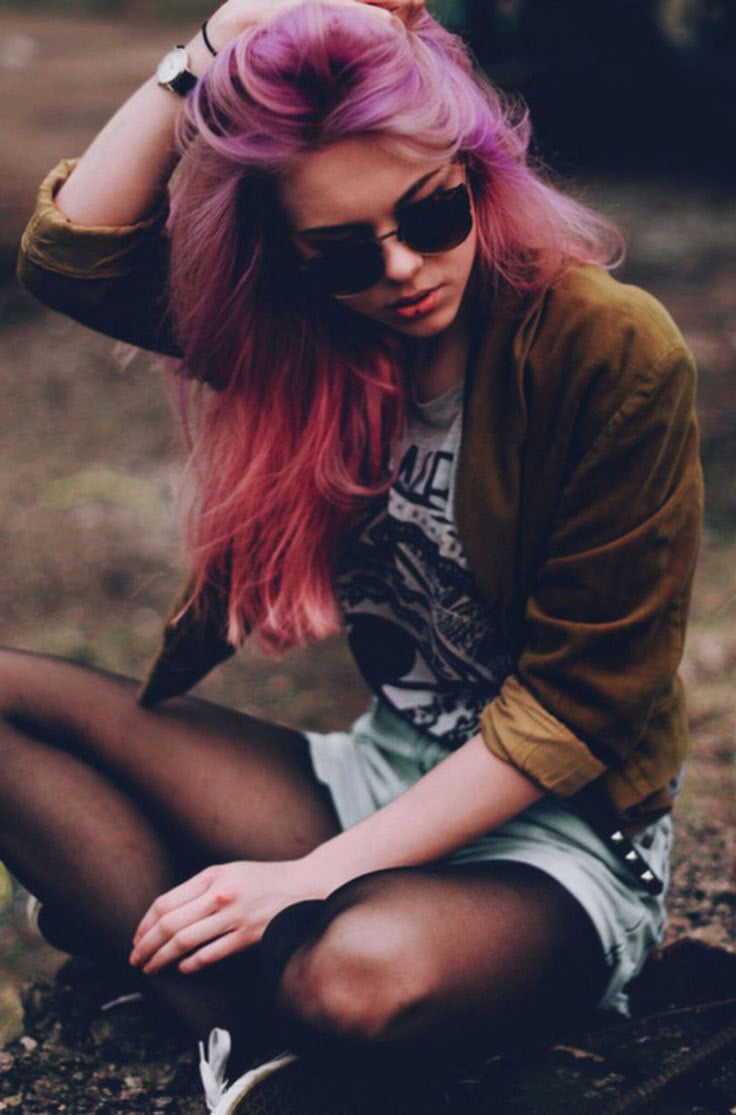 The pastel grunge crowd is about looking pretty as well as pretty hardcore. Think soft, whimsical hues such as lavender, coral, and even silver, thanks to Japan’s kawaii influence as well as the pastel goth movement! Each soft grunge chick is unique, so while one girl may love sporting a full head of light purple locks, another is all about the ombre pastel hair. No matter what shade of pastel color you dye your hair, keep headwear in mind – especially in the summer! Because in addition to providing protection, it’s super-cute when pastel hair peeks out from under a baseball cap or a wide-brimmed floppy hat! 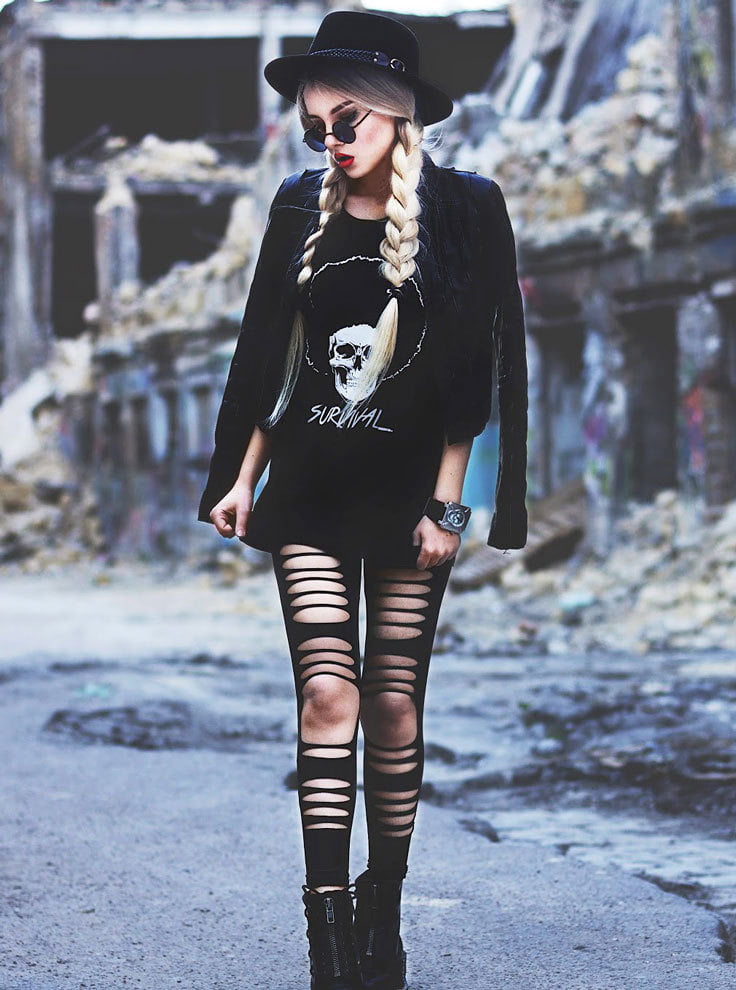 Distressed leggings are a beloved fashion essential among tons of different subcultures, including the soft grunge movement. It’s a basic item that can be worn alone as pants with a band tee or layered underneath denim shorts and mini dresses. In the early 90s, distressed clothing was a DIY project or an awesome thrift store find. Today, about 20 years later, finding the ripped or holey leggings you want are now just a click away, allowing you easy access to start creating your own pastel grunge statement. Whether you pair with boots, stilettos, or sneakers black distressed leggings are a staple that help maintain an edgy quality. 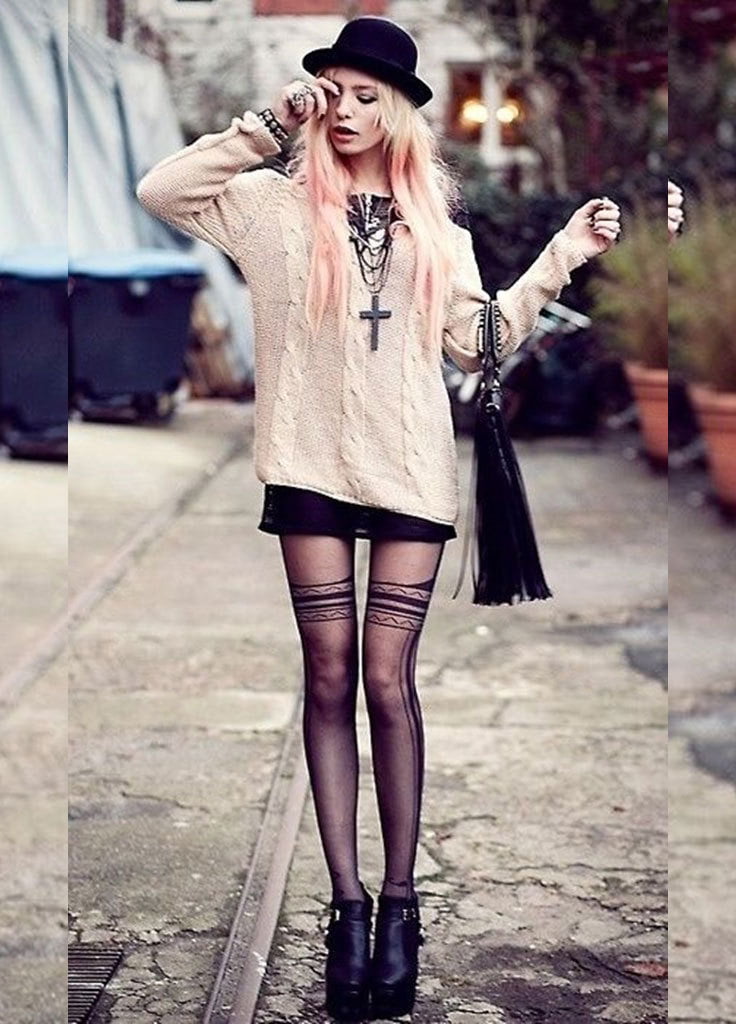 The shapes and symbols of gothic subculture have become intertwined with soft grunge fashion over time. This includes symbols of the occult, the rosary, and skull and bones imagery. These gothic shapes and symbols contribute to the intensity of pastel grunge vibe, which can be displayed through fashion in a number of ways. From rosary necklaces and chokers to skull leggings; let the dark and lovely aspect of your personality shine with special shapes and symbols. 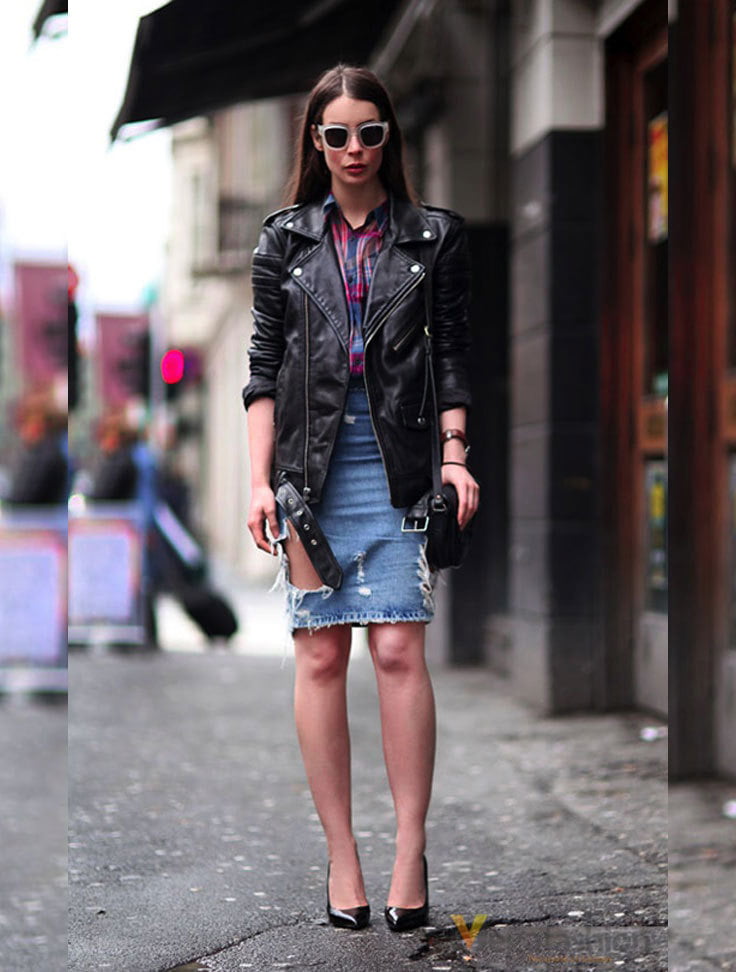 Those in the grunge lifestyle avoid spending too much time on grooming and favor looks that break the molds of society.

Although, today, soft grunge is heavily based on grooming, both hardcore grunge fans as well as pastel grunge girls are committed to their love for distressed denim – one of the most anti-fashion fashionable looks of grunge. From jackets to jean shorts, cut up denim is a rebellious staple that makes an alternative statement in a mainstream world. 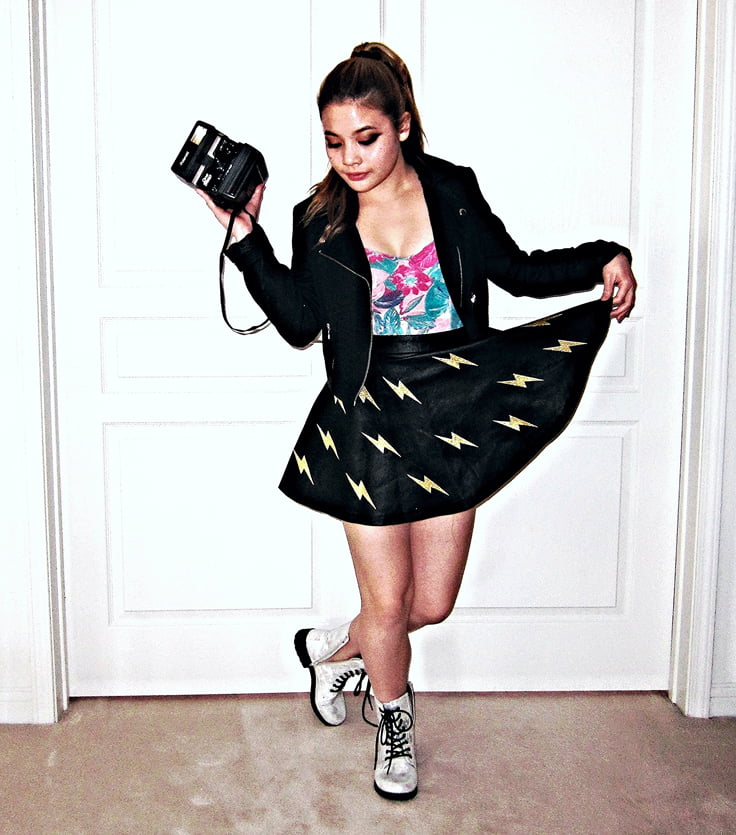 There was a time when combat boots were worn for function over style – a time when this type of shoe was strictly worn by soldiers in the military versus rockers on stage. Eddie Vedder, the frontman of Pearl Jam, was a king of worn-in boots in the early ‘90s, while Gwen Stefani was the queen of steel toe boots as she rocked out with her band No Doubt in the mid-to-late 90s. Although No Doubt was not considered grunge, as they became famous for creating music off of their love for ska and punk rock, Stefani showed that chicks, too, can rock out in a tough shoe…and look really cute in doing so! So as combat boots continued to evolve as a fashion statement since the original grunge movement, flashier and girly colors and prints became more available. This includes metallic and pastel combat boots – pretty tough styles that contribute to the beauty of soft grunge.

Is soft grunge fashion your thing? What do your thoughts about this subculture’s evolution? Feel free to share your thoughts in a comment below!

Pretty in Pink: How To Wear Pastels With An Edge

Where Have All The Rebel Grrrls Gone?

How To Rock Summer Pastel Hair

Pastel Goth: An Introduction to Goth’s Lighter Side