The Stylish Evolution Of Corsets Throughout History

Corsets are fashionable. Not only are they used for seductive lingerie, but they also look great as outerwear. When you’re in doubt for OOTDs, just wear a black corset with your top. The amazing thing about it is that it gives you the perfect figure. Plus, it can make you look both stylish and sexy. After all, not all of us are blessed with a coveted hourglass figure.

When it comes to history, there is more to the corset than meets the eye. Interestingly, the corset has been around for thousands of years. Sometimes they were used as a sexy outfit, while other times they were so tight that they could make a woman faint. Curious about the corset's history? Lucky for you, we've made a timetable that shows you how corsets have evolved throughout history: 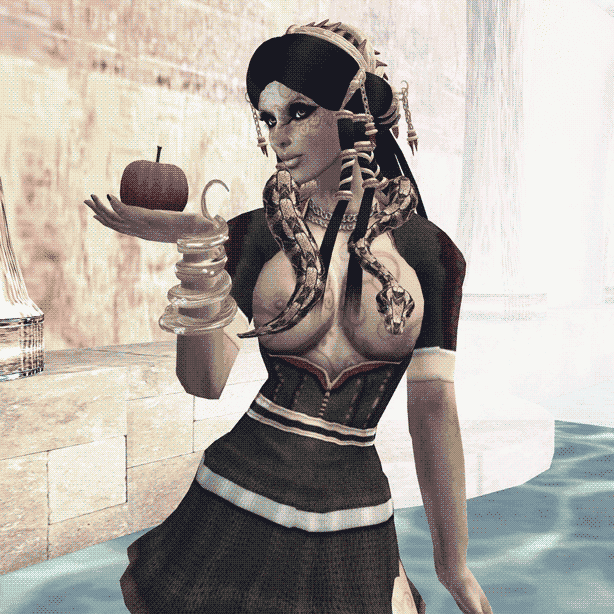 Corsets were first worn by Minoan people from Greece. According to artifacts, they were form fitting belts and vests with leather rings, that shaped the bodice into an hour glass figure. Culturally, Minoans placed such an importance on the perfect figure, that even their children were encouraged to wear them. Surprisingly, these corsets were extremely tightened to show off the bare breasts of women. 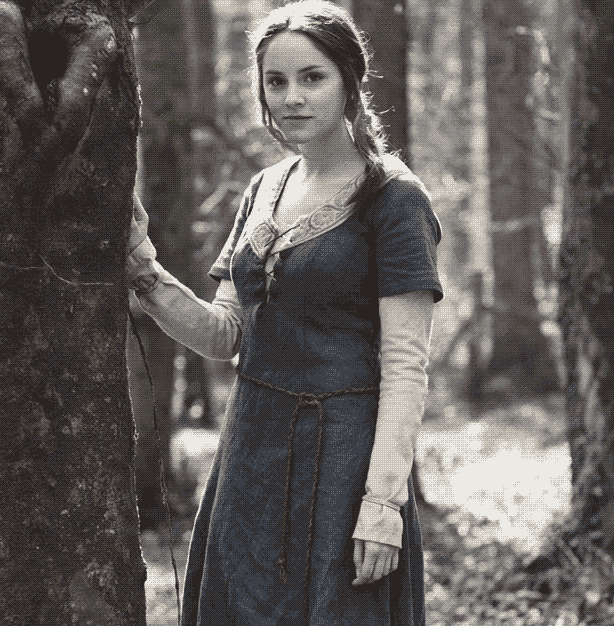 During the Middle Ages, corsets didn't fit in with the conservative culture of fashion. What was on trend were Medieval long dresses and tunics, which were worn with several layers. It was during this time that corsets were popularized as undergarments, but not in the form that you're used to. Corsets were typically made with bones or wooden slats, which were sewn at the inner bodice of the dress. 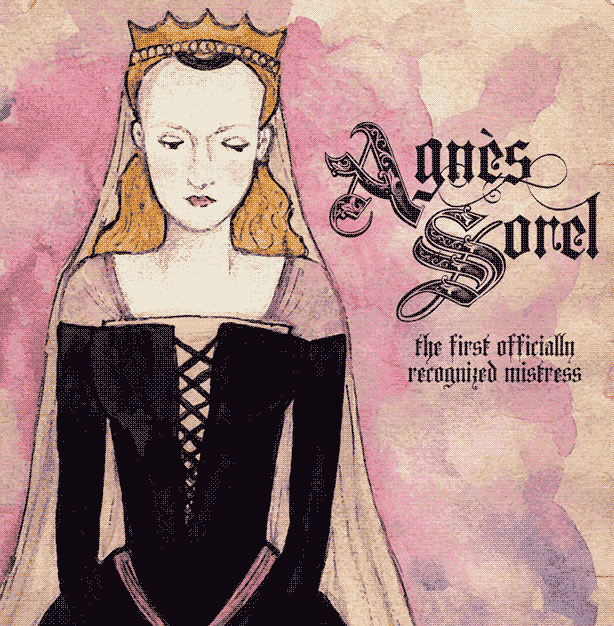 In the 15th century, corsets were a sexy staple for the wealthy French woman. But, how were corsets and bared breasts popularized in a society that previously loved long and conservative gowns? It all began with Agnes Sorel, the mistress of Charles VII of France. She came to the French court wearing a corset beneath her décolleté gown. After her successful day in court, French women were encouraged to wear corsets while revealing their bared breasts. For those who did not have the ideal breast size, artificial busts or falsies made of cotton and wooden stays were the lifesaver 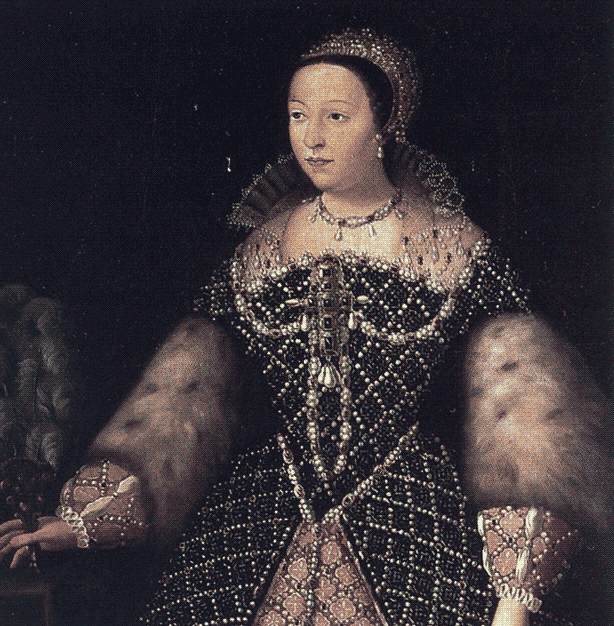 According to Drea Leed, an authority in historic costume,

"The corset was not meant to draw in the waist and create an hourglass figure; rather, it was designed to mold the torso into a cylindrical shape, and to flatten and raise the bust line."

This meant that unlike the sexy corsets, which were meant to show off a woman's curves, the 16th-century corset emphasized the concealment of these curves. For instance, Spanish women wore corsets that compressed their breasts, until they were completely unnoticeable. This gave women a rigid appearance. For men, corsets came in the form of bronze, polished breastplates, which were both glamorous yet practical for battle. But, where did it all begin?

These types of corsets originated from Catherine Medici, who banned thick waists at court. In short, it was not a good time to be a slightly overweight male or female.  Queen Elizabeth followed suit with the Elizabethan corset, which was made of wooden or whalebone stays that were fastened on the left side by hooks. 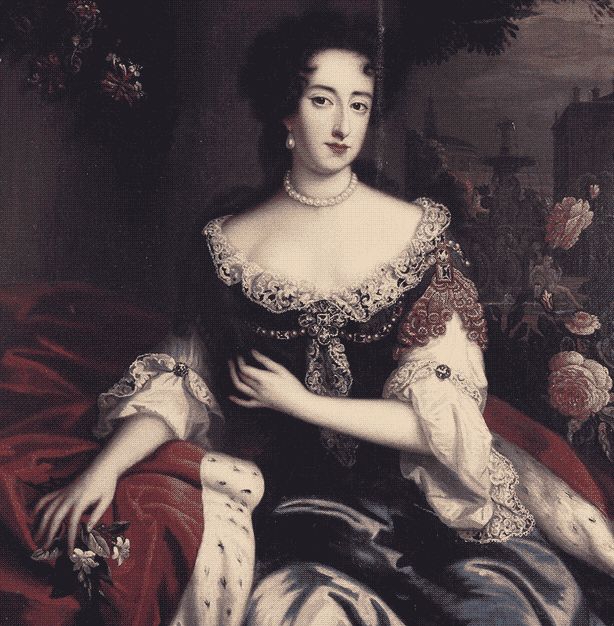 In the early half of the 17th century, bared breasts solidified a woman's beauty and place in the aristocracy. As such, prominent figures like Queen Mary II and Henrietta Maria were usually depicted with their bare busts. They wore corsets that had a fabric bodice and boned lining with lacy decorative designs.

In the later half of the 17th century, Madame de Maintenon, the 2nd wife of King Louis XIV, successfully put an end to female corsets that were worn to uplift the breasts. She preferred corsets that accentuated the shape of the bust and the décolletage, rather than the bust itself. This gave way to a corset with an inverted conical shape that was structured with steel. 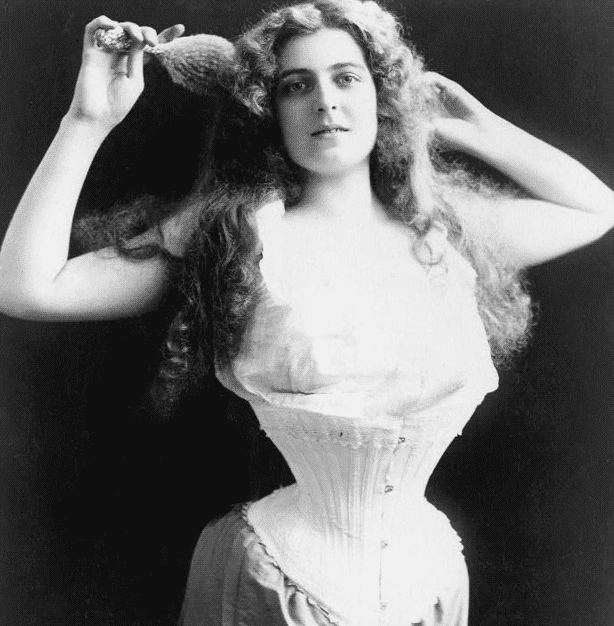 A long time ago, corsets were handmade and intricately tailored so only the royalty could afford them. Thanks to the industrial revolution, corsets were mass-produced and cheap to the point that almost anyone could afford it. Thus, began the golden era of corsets. Women pushed out their bosoms and flattened their stomachs, with the help of an elegant corset with brocade patterns. The S-shaped corset worked well with their flowing gowns and empire waists. And who could blame them? Regency fashion was simply irresistible, but it wasn't all sunshine and rainbows.

While the corsets emphasized a woman's elegance, they were also seen as a detriment to her health. After all, it was often thought a common practice to tighten these corsets to the point that a woman could faint.  Many felt tight corsets could even rearrange a woman's internal organs, cause tuberculosis, damage the heart and lungs, and displace the liver. In fact, they were considered so harmful that health experts introduced a healthy corset. The new version came with ventilation in the form of eyelet holes, and elastic panels to help a woman adjust to its rigidity. The most popular form of the healthy corset was the Caroline Health Corset, which was introduced by the De Ver Warner Brothers. 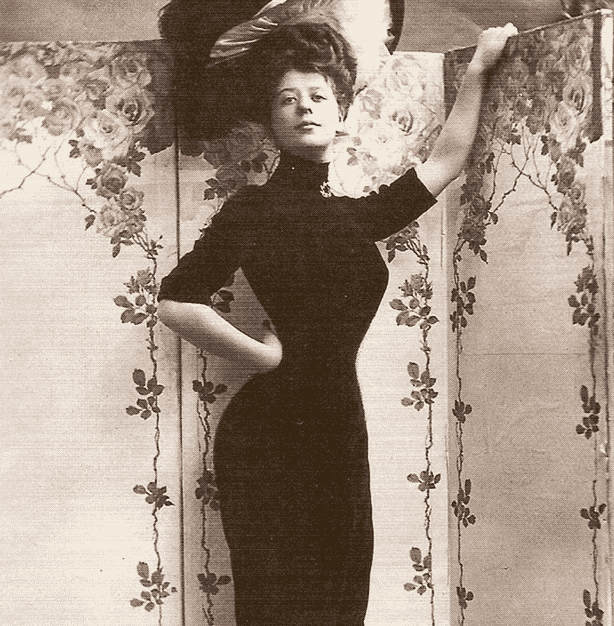 The early 1900s were marked by the rise of the brassiere. Women paired brassieres with a corset to reduce the hips and to achieve a straight form. Unlike the previous eras, these corsets were made with rust-proof boning and rubber coated spring. Like the Victorian corset, the brassiere and corset combination was also widely popular. In fact, the popular Gibson Girl used corsets to achieve exaggerated curves, sloping bust and graceful hips. But, the trend did not last very long.

Women began the rational dress movement whose aim was to get rid of the classic corsets. Other women preferred the backless brassiere by Mary Phelps Jacob.  In addition, the demand for steel during WWI decreased the supplies of corsets on the market. 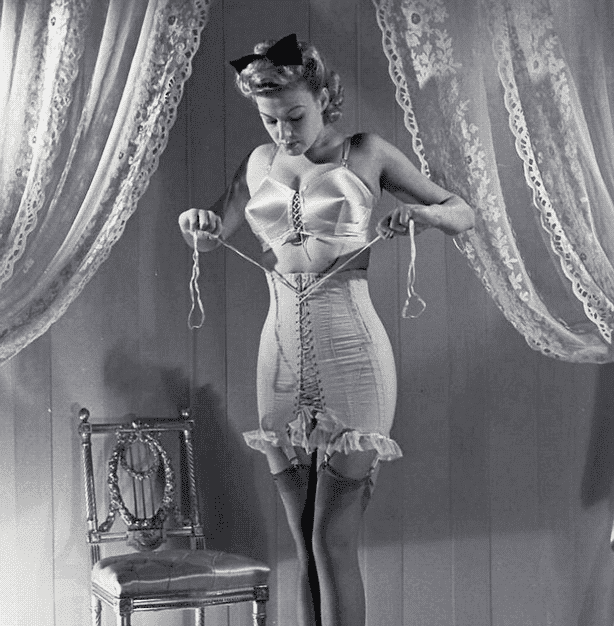 Since metal was a necessary resource during WWII, the production of corsets was strictly limited.  Luxurious fabrics were a hard find, and zippers were out of production. This made sense because, in desperate times, metals belonged in the war zone and not in a woman's undergarments. This led to the invention of girdles; otherwise known as the new corset. It spanned from a woman's waist to her hips, and it was either worn with a bra or fastened with hooks. Besides girdles, looser corsets that slimmed down the hips and thighs were a popular alternative. 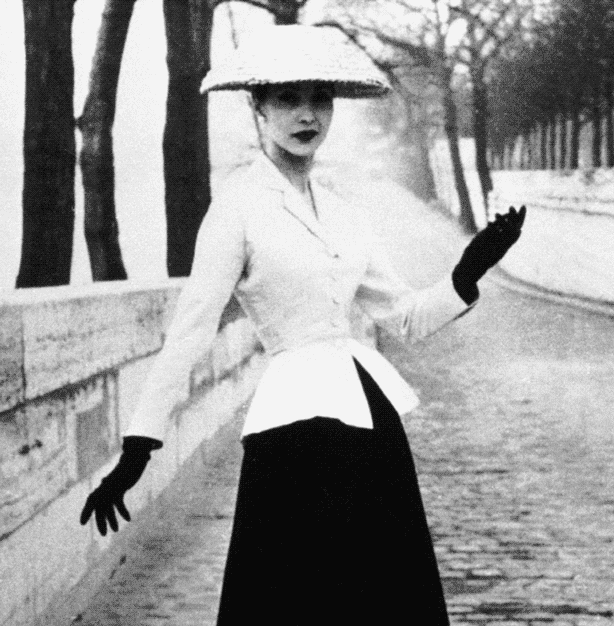 The classic corset comeback happened after WWII. Christian Dior launched the New Look collection, which featured the new shape of a modern woman. The outfits in style were floor length skirts, slimmer waists, and fuller busts. To achieve the ideal body shape, a tight corset was a necessity. Besides Christian Dior, Frederick Mellinger took brassieres to a whole new level. He introduced the padded bra and the push-up bra, which allowed women to show off their rounded breasts. 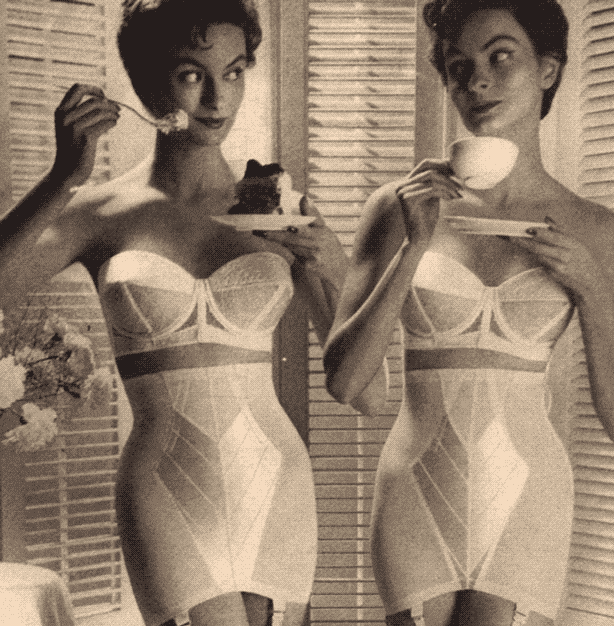 During the 1950s, girdles were a required undergarment. In fact,  women who did not opt to wear corsets after childbirth were commonly looked down upon. Unlike the past, these girdles were made up of latex rubber and nylon. They were meant to give women the appearance of a flat line or a flat bottom. Since the war was over luxurious garments and zippers were back in production, so women usually zipped themselves into a corset. 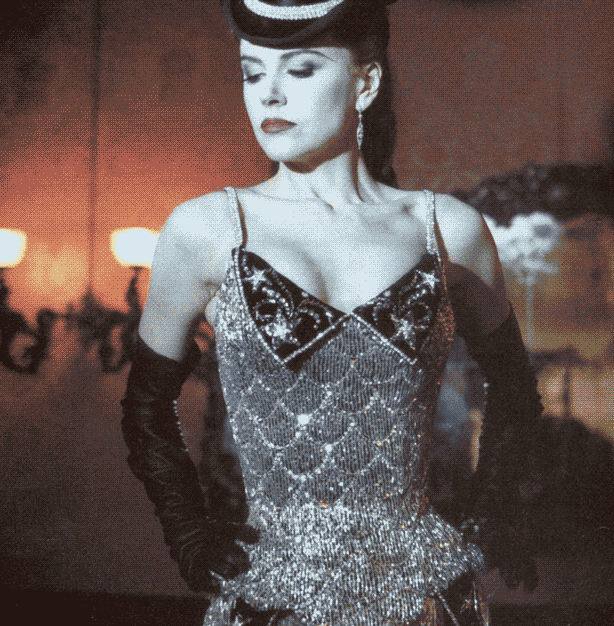 Traditionally, corsets were always an undergarment; however, in the 1970s punks began to wear corsets as outerwear. Since punk can trace its origins back to the Victorian era, it made sense that they would wear Victorian-styled corsets. Though, the trend was not exclusive to them for very long. Pretty soon, Viviene Westwood and Paul Gaultier showcased outerwear corsets on the runways. They were such a hit that in the 1980s women showcased their corsets in public. Icons such as the stars of Moulin Rouge flaunted their corsets in movies, music videos, and public performances. 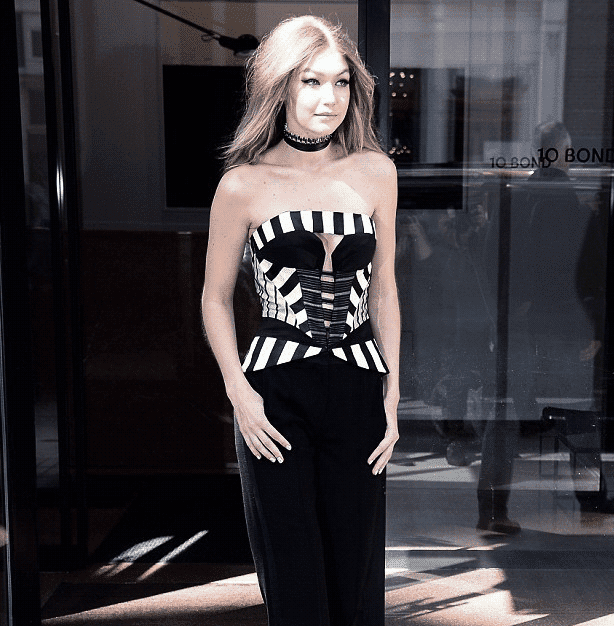 In the 21st century, the corset has definitely changed.  Most women wear bras as their undergarments, while corsets remained as a staple for the lingerie industry. However, these days’ corsets are making a comeback. No, not the type of corsets that are so tight that they could make a woman faint. We’re talking looser and comfy corsets that serve as an ornament that could be added to a woman’s dress or top.  From what we have observed, women have embraced corsets both in the streets and at work. Fashion icons such as Gigi Hadid revived the trend with her monochrome corset top, while Kim Kardashian donned her waist trainers. With these stars wearing corsets, it seems that the corset will continue to live on.

Tight-Lacing: Everything You Need To Know About Corsets

Corset Ideas for Your Wedding and Honeymoon