In the 1970s the kawaii movement began among young girls in Japan, quickly becoming a cultural phenomenon that would expand across the globe over the next few decades.

The Japanese clothing company Spank! emerged as the ultimate manufacturer for all things kawaii, prompting people to start referring to the kids dressed up in the kawaii look as "Spank! girls", a title some have readily embraced and others have shied away from when building their identities. 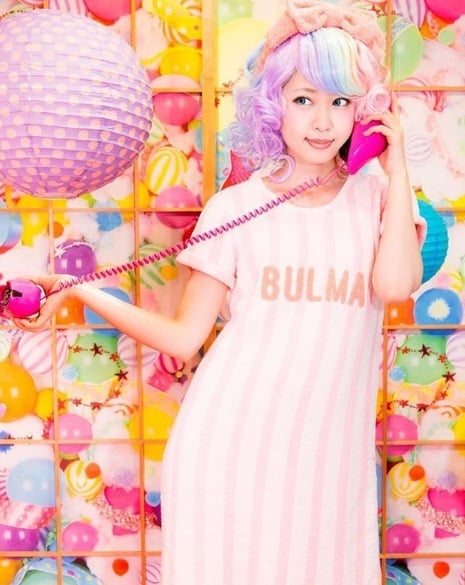 Ask any Gen Xer or Millennial today and they will tell you about the surging popularity of Hello Kitty when they were a kid; a quick trip to your local big box store will prove that the adorable, mouthless kitten and her friends from Sanrio remain as popular as ever among young children.

Those same Gen Xers and Millennials will also tell you about how the Goth movement developed a following around the same time, in part as a reaction to the flourishing grunge movement and partly in response to the quirky, adorable kawaii fashions that were sweeping the country.

Today the cute kawaii movement and the dark, brooding Goth fashions have blended, proving that, much like chocolate and peanut butter, two amazing things can come together to create something else that is even more amazing. This awesome combination lets people embrace both the light and dark sides of their personalities in one fantastic ensemble.

There are a number of different ways to combine the fun and adorable aspects of kawaii with the dark and mysterious parts of the goth look. 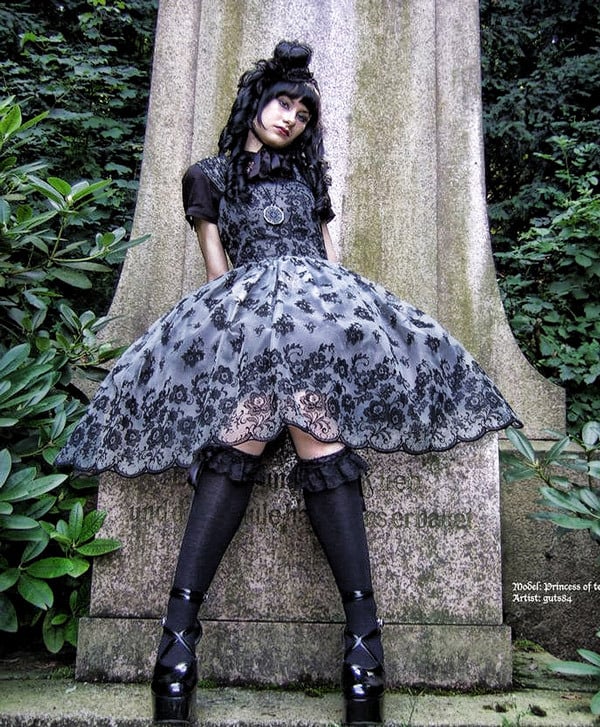 The Lolita look is inspired by Victorian children's fashions, typically those including ruffles, bows, crinolines, petticoats, bonnets, and parasols. Designed in defiance against social expectations and gender norms, the look pairs perfectly with the rebellious nature of the Goth movement.

Instead of white, pink, or other traditional childhood color schemes, the Goth Lolita embraces black lace and ruffles. Typical cameo brooches, platform boots, and corsets found in Goth fashions pair seamlessly with the petticoats, knee-high stockings, and parasols that embody the Lolita look. An excellent example of a Goth Lolita would be Lydia Deetz from the film Beetlejuice. 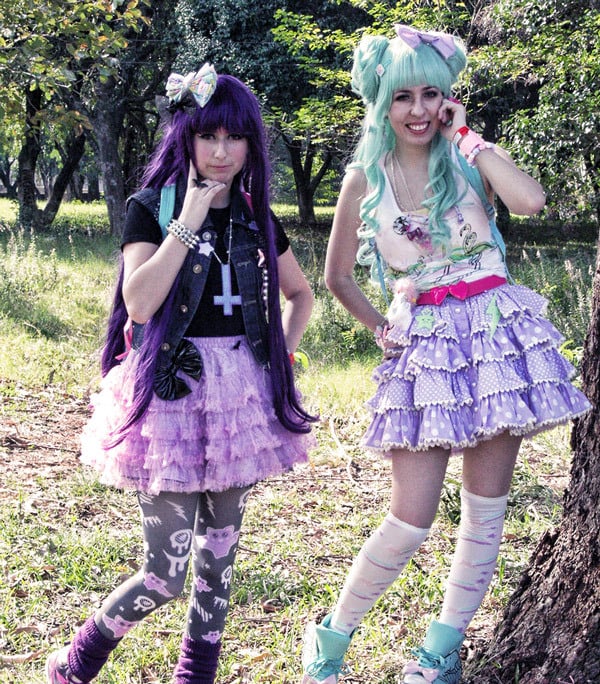 Fairy Kei is a mix of cutesy kawaii looks with a retro 80's twist, adding lots of colors and adorable children's characters like Hello Kitty and My Little Pony to the traditional leg warmers and oversized blazers (shoulder pads included!) that were so popular in 80s fashion. Fairy Kei also tends to be feminine in nature, with lots of skirts and dresses in an almost exclusively pastel palette.

Adding some black eyeliner and darker undertones to an outfit would be an excellent way to put a goth spin on the Fairy Kei look. Paired with dark make-up and the right hairstyle, throwing an oversized sweater and leg warmers with pretty pastel colors on top of black tights or fishnets would be the perfect combination of Goth and Fairy Kei. You can even tilt this look one way or the other, adding a black leather jacket and platform boots to make the look more Goth or add a pocketbook with cartoon characters and some colorful bangles to pull it closer to the traditional Fairy Kei style.

With the addition of some leg warmers and a frilly black skirt 1980's Pat Benatar is the perfect example of a basic Goth Fairy Kei look. 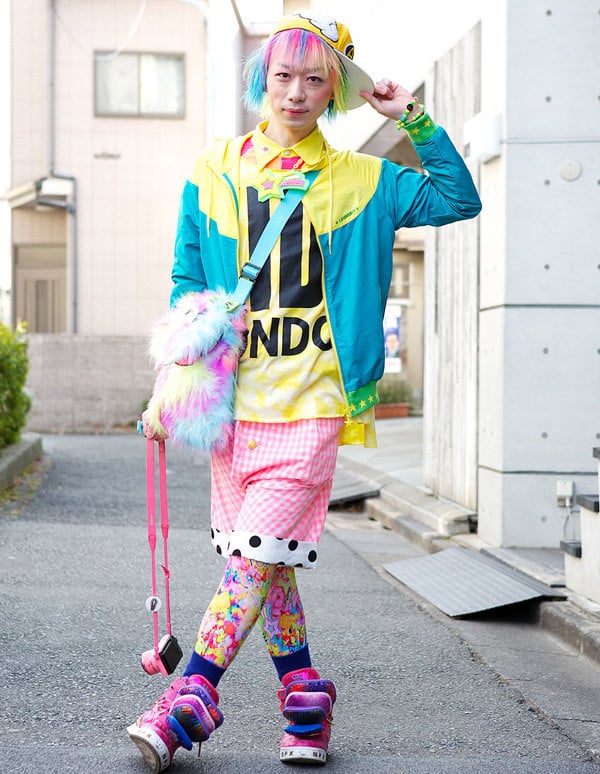 While similar to Fairy Kei, Pop Kei has a few important differences that set the two looks apart. Rather than tending towards skirts and dresses, Pop Kei focuses more on outfits with pants and shorts. Pop Kei also uses much more denim and leather in their ensembles along with sporty attire like ball caps and, jerseys, and trainers. The look still has that retro 80s feel with plenty of bright neon colors and oversized apparel but also uses plenty of heavy, dark colors and fabrics, making this the ideal combination for those people looking for a natural blend between Goth and kawaii.

A little black dress over a colorful top, a neon-colored ball cap, and some black Converse high-tops are the beginnings of a fantastic Goth/Pop Kei combination. Add a denim or leather jacket and dozens of colorful bangles, perhaps with a synthetic wig or hair that has been dyed wild or bright colors, and you'll be the poster child for this awesome look. If you are looking for inspiration for this particular fashion collaboration, think about what Cyndi Lauper would have worn to a Mets game in 1986 and you will have perfected the look. 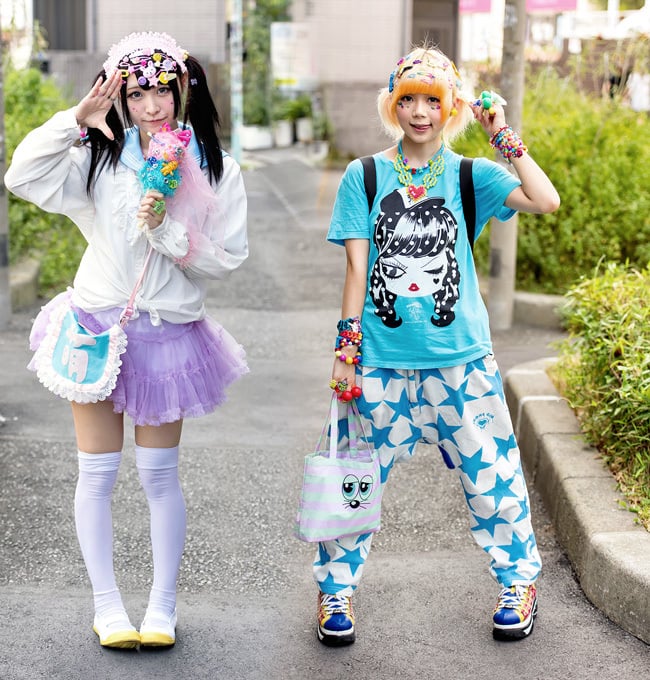 Decora fashion seems to be the exact opposite of Goth. All about wearing multiple layers of the brightest colors you can possibly find, Decora is supposed to be the loudest fashion you have ever or will ever see. It is not uncommon to see people wearing multiple stuffed animals as part of this look, which is a testament to just how far Decora devotees will go to perfect their image!

Despite their clear differences it is possible to combine both Decora and Goth into one amazing outfit. Start with a Goth first layer, perhaps a corset and fishnets, followed by multiple layers of clothing (colorful or otherwise) and topped off with black patent leather, which will add a dark tone to the outfit while the glossy patent leather will still be eye catching to anyone around you.

Combined with dark, glittery makeup this is the perfect base for your fashion combo. If you want to add some stuffed animals to your outfit consider choosing black bats, stuffed skeletons, or movie monsters like mummies or vampires, and don't forget to top off your outfit with a few shiny silver pieces of jewelry. Imagine Mary-Kate Olsen dressing for fall in New England and you'll know exactly how to put this look together.

Whichever style you choose, don't let the dichotomy between kawaii and Goth fashions make you think you have to choose one or the other. Embrace every facet of your personality when you are getting dressed in the morning!

What other kawaii fashions would you pair with the Goth look?